Star Wars – Crimson Reign #1: Qi’ra and Her Galactic Holo-Chess Board 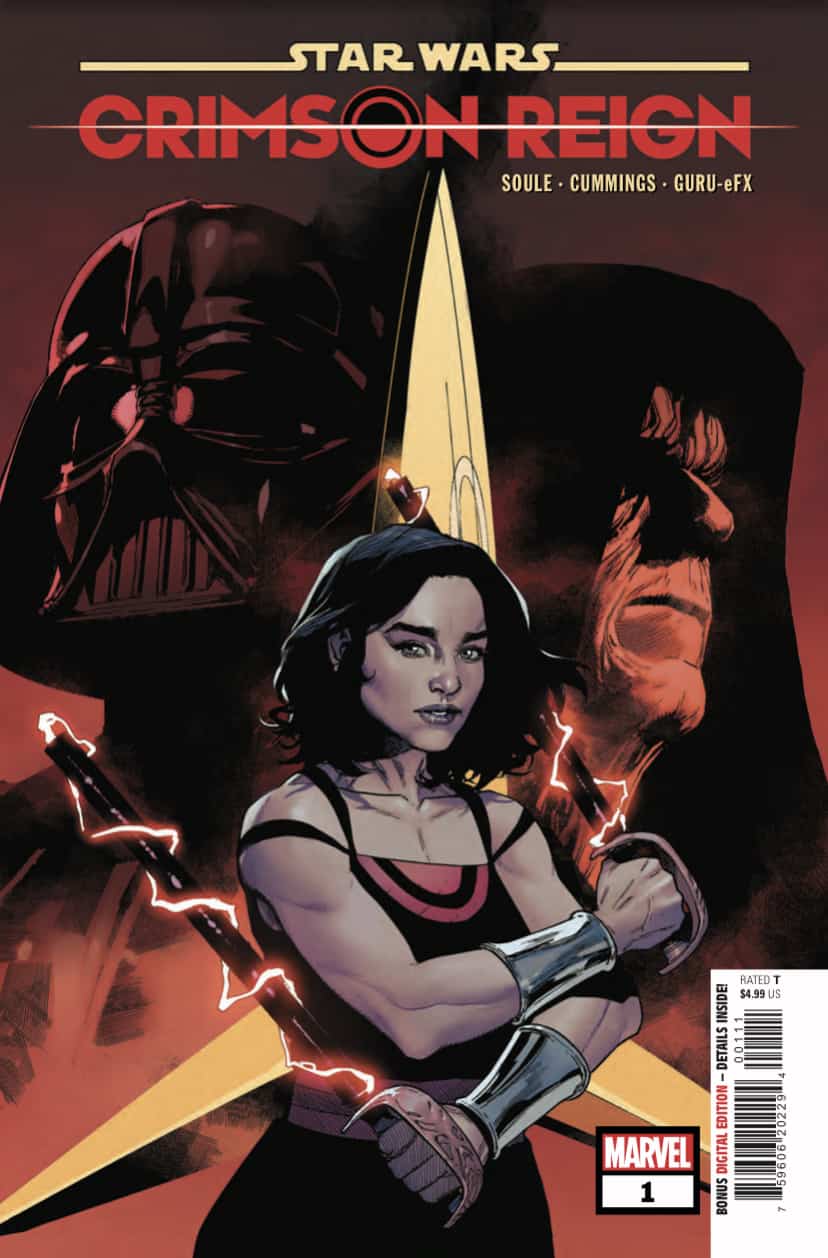 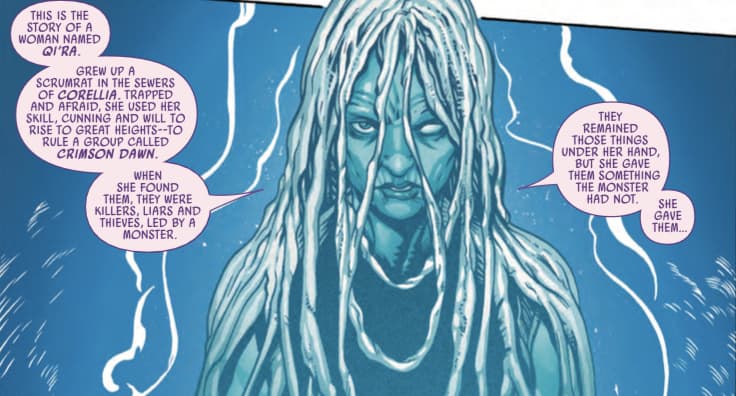 After Crimson Dawn’s auction of the frozen Han Solo, Qu’ra has set her sights on a much larger task. She and her organization will attempt to rid the galaxy of the Sith.

Readers might be sick of having to follow the convoluted multi-series “War of the Bounty Hunters” event, but only a few weeks after it concluded, “Crimson Reign” is here to do it all over again. Once again Marvel offers an event so galaxy-shattering that is affects all the other series in the same time period. Fans should not feel dissuaded though.  This new series hits the ground hard and does not let up. The first part is the issue is essentially Qu’ra explaining her plan, her operatives, and her objectives. This is followed quickly by her operatives immediately going into action all over the galaxy. The “War of the Bounty Hunters” was but an message to let the galaxy know Crimson Dawn is back. “Crimson Reign,” seeks to show the galaxy that they mean business. 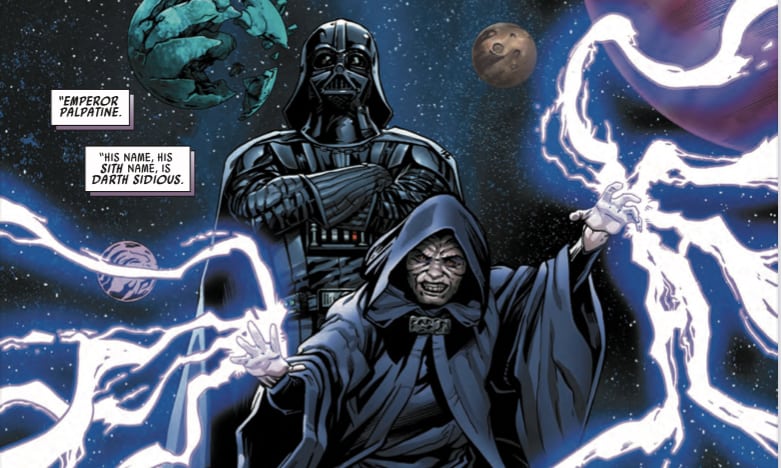 Pulling together so many separate elements from all over the Star Wars Saga is no light task. However if every character and setting were already established, the series would seem forced and cheap. If it is too original, it would seem not very “Star Wars.” This series leans toward an almost diplomatic solution. It hits the audience with a ton of characters they already know, some fresh out of “War of the Bounty Hunters” and some classic, but it also manages to throw a ton of new and original characters, ships, and setting at readers as well. The events of this issue, and presumably every one in the greater event, is a blend of new and old elements meant to seems familiar and fresh all at once. Some characters even have new revelations into their pasts, which adds another level of deepness to them. New characters however go mostly unexplained, adding to their mystery.  This chapter goes a step further and actually names drops an old Legends character, thus making them canon, to pile on even more a palatable mix of familiar and new. 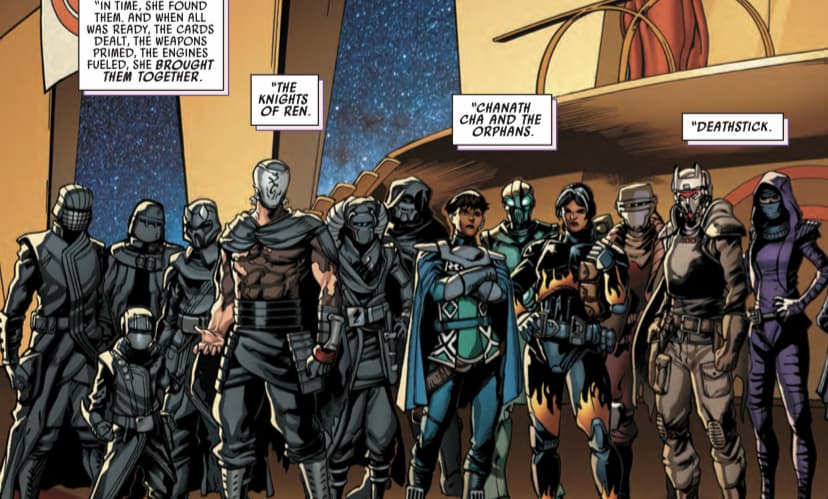 Being a jumping point for a mufti-series even is difficult to pull off. Yet somehow, “Crimson Reign” manages to have a much strongest starting point than “War of the Bounty Hunters did. It starts out outlining Qi’Ra’s plot, it shows the audience the players, and it shoots off quickly on a concise, multi-faceted, yet ultimately completely understandable trajectory. This chapter gives such a better taste of what’s to come than the previous event did. It helps that the art, coloring, and lettering are excellent in this issue. Qu’ra is captured well, and these characters that fans know already are instantly recognizable. Now the ball is rolling with “Crimson Reign” as it now heads through the various other Original Trilogy era series. “Wars of the Bounty Hunters” sort of knocked the other series off track. Hopefully this strong opening issue will help this series to avoid that same fate. 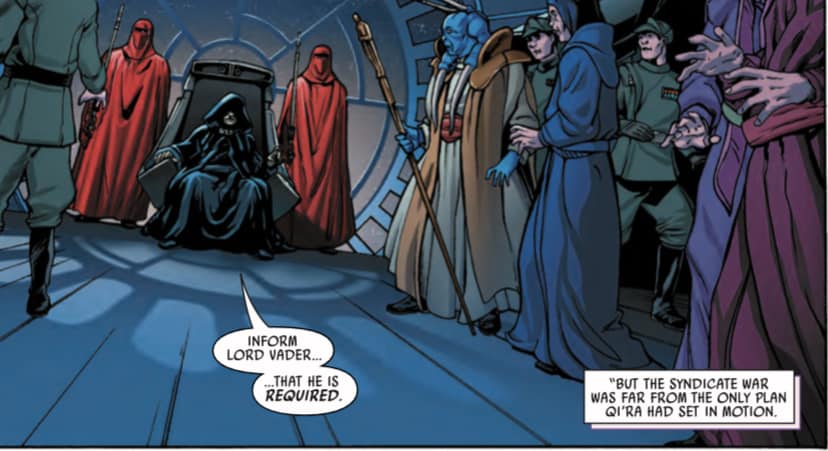 All the pieces are set in Qi’Ra’s giant chess board, and she is ready to play for keeps. She is going after the toughest guys in the galaxy. It should be no surprise that her next task is to get the Rebel Alliance involved.

Star Wars – Crimson Reign #1: Qi’ra and Her Galactic Holo-Chess Board