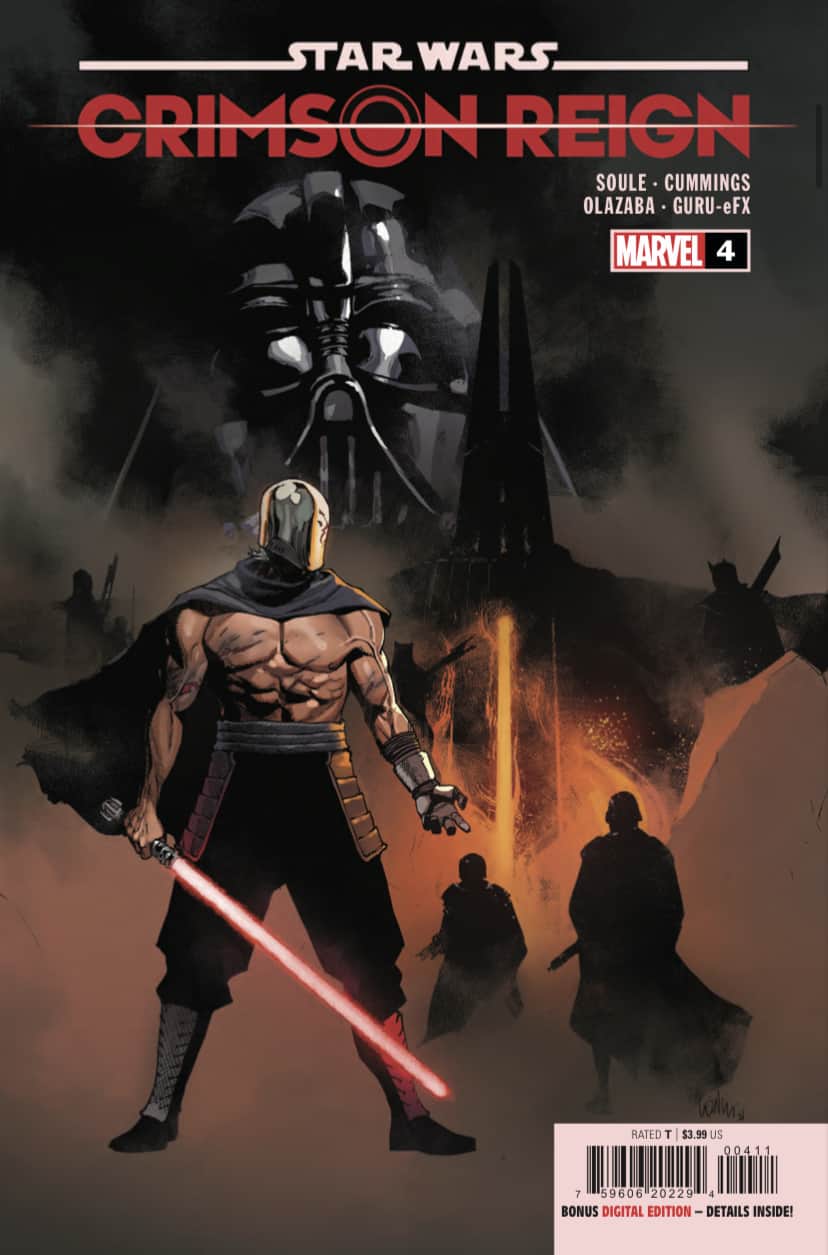 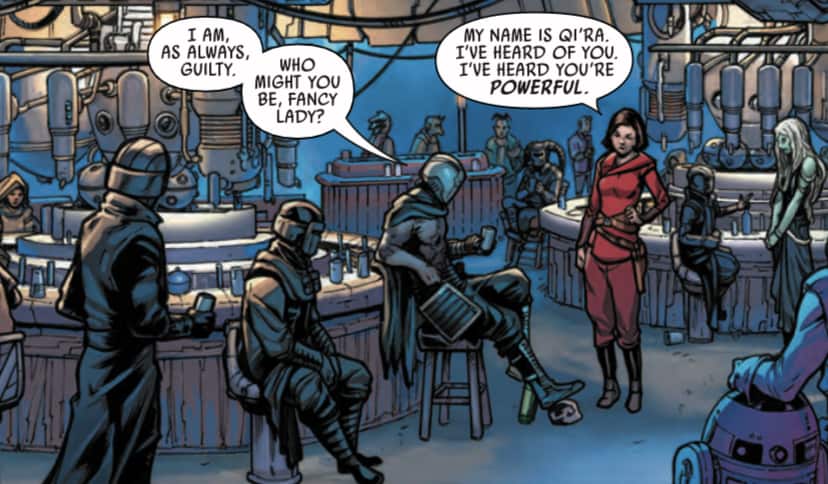 Qi’ra continues to collect agents of the galactic underground in her war against the Emperor. This time she recruits the Knights of Ren. However this version of the Dark Side cult is from thirty years prior to the group seen in The Force Awakens. Qi’ra has tasked the group with striking out against Vader’s home.

Ever since their few second shot in The Force Awakens, People have been nuts about the Knights of Ren. Who are they? Are they Sith? What is their connection to Kylo Ren? Despite the clamor for more info about them, the Sequel Trilogy does little to explain them. The comic series “Rise of Kylo Ren” as well as a tongue-in-cheek “Lego Star Wars Holiday Special” gave fans a glimpse of who they were, but through the view point of Ben Solo. This issue makes the Knights the main view point. Taking place decades before, this version has more unfamiliar members than recognizable ones. Clearly the cult has lost and refilled spots in the group over time. This group is a bit more talkative then the silent ghouls of Rise of Skywalker. They are brash, cocky, and overconfident. That trait is most shown in the leader, Ren. When Qi’ra comes to recruit them, he even tries flirting. The banter between the Knights is light and fun, and the accomplish tasks with relative ease. They are eager to rush into battle and dominate. They are truly a unique and capable squad, which is never fully realized in the films. 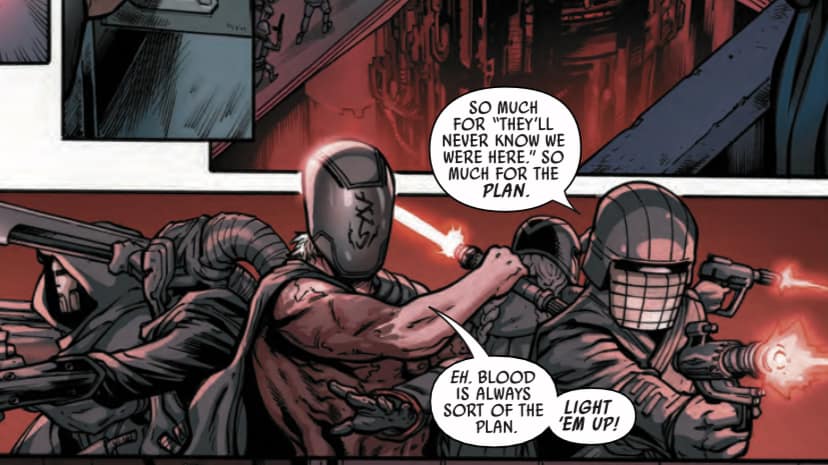 One of the goals of “Star Wars” comics this past year has seemed like it is to change the way fans think about characters and events in a different but positive way. Instead of showing known film characters in almost disconnected short stories that have no impact on the films and no character development, the various series have attempted to expand upon characters’ journeys to show them become the persons we see play in the films. This past year of stories have been extremely interconnected in not only the “Crimson Reign” crossover, but also in “The High Republic” and “War of the Bounty Hunters.” This chapter shows a small sliver of that overall effect. This issue redefines who the Knights are, establishing them as a Dark Side cult, only a shadow of its former glory when the group was at full power in the past. It disconnects them from the time period audiences associate them with by many years, which also further establishes a legacy for this group. It shows that Qi’ra will resort to using the baddest of the baddies without any fear from them to accomplish her goals as well. Lets face it, these guys are way more dangerous than Ochi or Deathstick and not the kind of group just anyone can just manipulate. All in all, this single issue ends up saying more about these characters than anything else released so far. 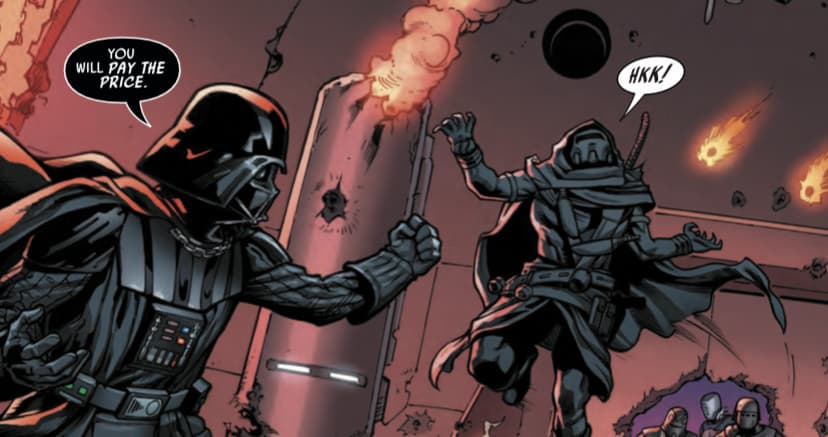 This issue provides a lot of drawbacks for colors. The bulk of the issue takes place on Mustifar, which is basically just black and red. This issue does certainly have plenty of that, but it manages to not dominates the issue. Various indoor scenes range from a swampy green, to blue steel, to even purple storage units colored that way because red light reflections off of that same blue. This chapter does a lot with a limited palette. The art is pretty great, but doesn’t have the bar set up as high as the color did. Because almost all the characters in this chapter mostly wears masks, there isn’t too much danger of losing facial characterizations for each character like some other “Star Wars” comics can. This issue was an excellent addition to the “Crimson Reign” series, but unfortunately is doesn’t affect the entire line of comic series that make up this time period. In other words, Nothing here will affect the story of Return of the Jedi all that much, and that’s the closest major event to this time. That’s not a bad thing. It’s still and excellent issue that can stand on its own, and it still manages to drawn from and expand on other aspects of the overall sage in other places. 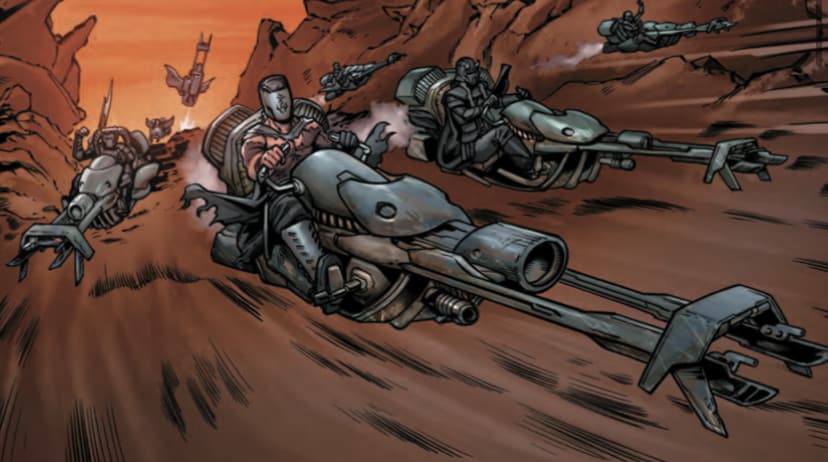 The issue ends with a mission complete, but not without laying down ground for further stories involving the Knights of Ren in the future or past. Vader certainly now know about the Knights form this period now. It’s a sure bet that he wont be forgetting them any time soon.