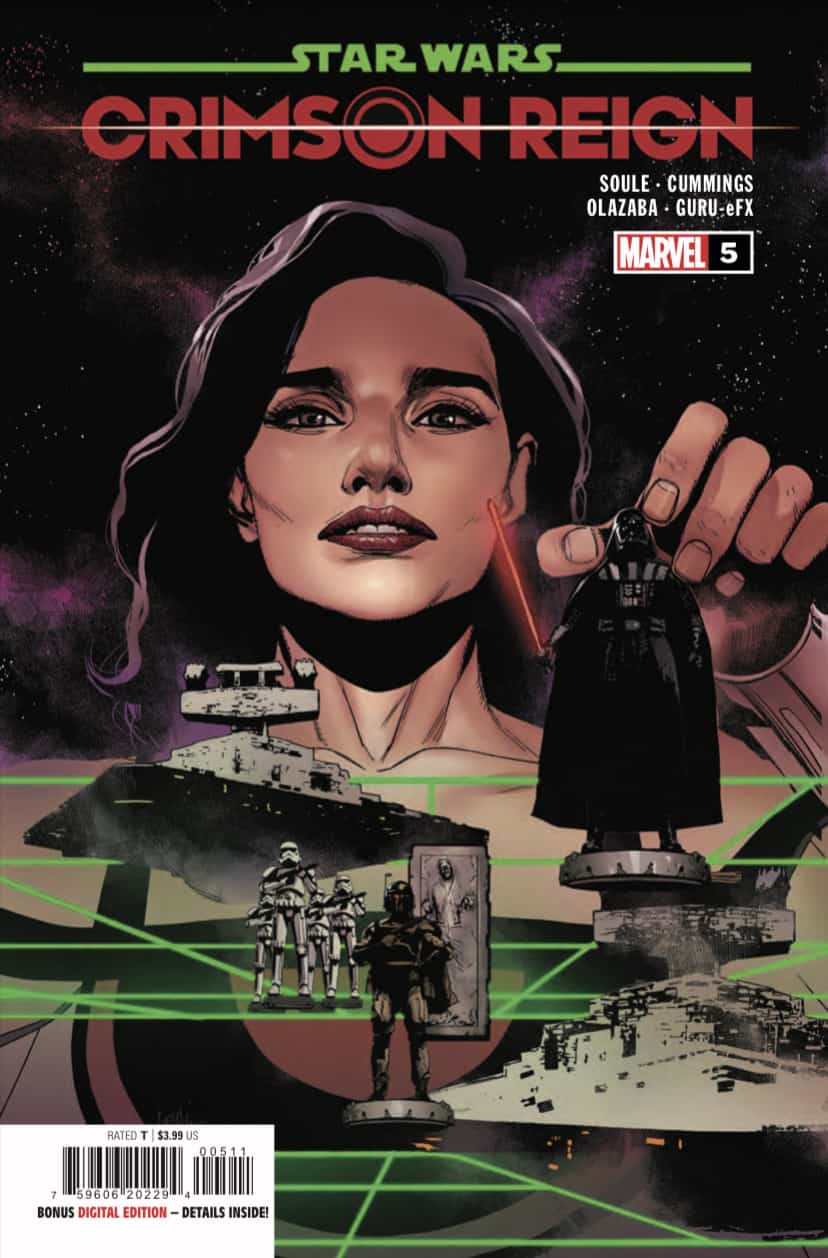 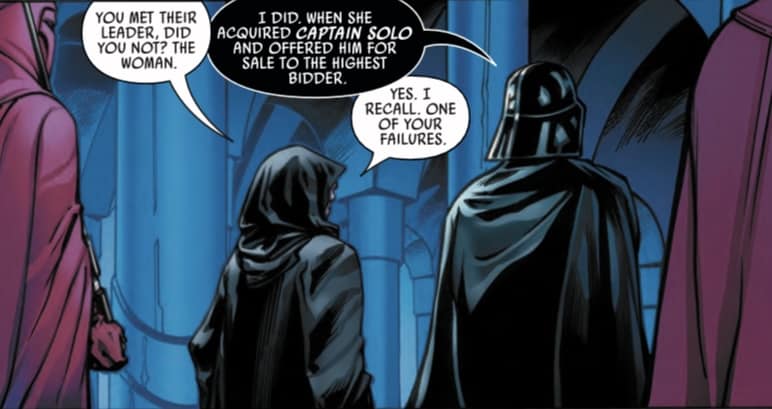 Qi’ra sets her true sights on bringing down the Sith infestation on the galaxy. She brilliantly collected new allies and put all her agents into place, even procuring spies from within the Empire itself. In this final issue, Qi’ra finally catches the attention of the Sith and must prepare for the backlash headed her way.

“War of the Bounty Hunters” was a huge undertaking for not only modern “Star Wars” comics, but all “Star Wars” comics since they began. Never before had there been a crossover of almost all series into one giant story. Although it is a new concept to this series, this multi-series crossover concept was in no way new to Marvel. Waiting only a few months later came the second event, “Crimson Reign.” Although not quite as big, “Crimson Reign” made for a more interconnected series. It wasn’t as disjointed as “War of the Bounty Hunters” was, maintaining a less cluttered timeline and allowing each series more freedom from having to include a central event and location. This titular series acted as a natural keystone to the entire event. Basically each issue followed Qi’ra as she enlists some sort of help, be it the Rebellion or the Knights of Ren. The other series were played directly off her involvement with various agents and worked to show how huge and influential Crimson Dawn really is. This issue brings it all to a head. Because it is an intended middle series of three total, it ends not with a huge battle but by setting up the final and likely most explosive series, “Hidden Empire,” set to come out this Fall. This built up anticipation is sure to get fans excited for the final installment. If that was the specific goal of this issue, it does its job well. 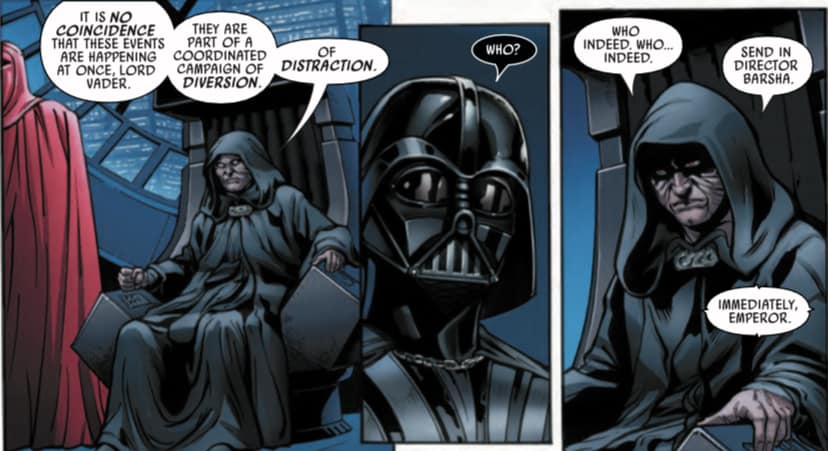 One of the greatest strengths of this issue, and by extension the whole series, it that it shows audiences a kinder more level headed Qi’ra. Before “War of the Bounty Hunters” fans didn’t know what eventually became of the character after the events of the film Solo. That series painted her as more mischievous, like she was playing the galaxy for fun. It was impossible to really figure her out there. In “Crimson Reign” she is clearly on a set course, taking down the biggest baddies and even going as far as to assist Leia and her Rebels. In this chapter specifically, the readers get to see her addressing those closest to her as she enters the next stage in her machinations. She is gentle and kind with them, while reaffirming the seriousness of their mission. There is no question that she is played as the hero here. In many ways this issue sort of reaffirms that her intent is born from good intent. That being said, this is someone trained by Dryden Voss and Maul. It’s impossible to really know Qi’ra’s true plans. Although “Hidden Empire” may reveal a more sinister purpose from her later on, one is not at all apparent in this issue. 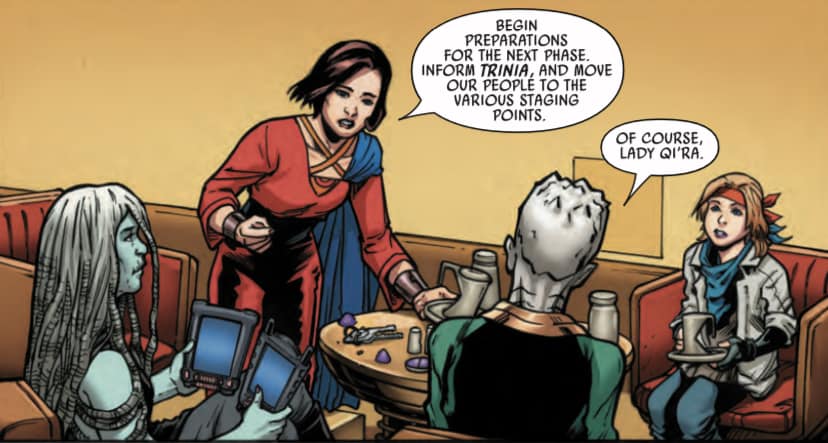 This issue is undoubably an important one. It not only successfully ends one long story, but it opens the door for the next one very well. Characterization of Palpatine stands out in this chapter in particular. He looks extra menacing and cruel. Vader is typically imposing. Qu’ra is depicted as being a benevolent and confident leader as well. There is a side story thread about the Knights of Ren that add much needed action to the issue to offset all the exposition and it is drawn out perfectly. The issue drips with bright colors, although sticking mostly to crimson, blue, and gold themes. Using the three primaries is a very classic comic book combination, whether intended or not. Another technical aspect that makes this particular issue pop is the detailed backgrounds. It’s easy for an issue to focus on just natural backgrounds, or just space, or something like that. This issue has corridors, throne rooms, caves, outdoor scenes, etc. In each case the background imagery matches the tone of the scenes with lots of fine detail. That adds dimensions to the images and the story. It’s easier to follow even mundane action when it happens in a believable space. 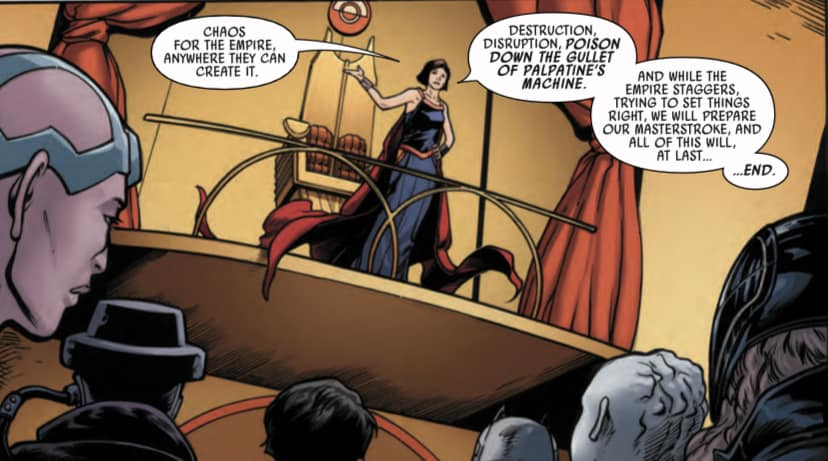 Qi’ra has publicly declared her true intentions to displace the evil Sith rulers and to install her own Empire. At the same time, the Emperor is gunning for her too. All of this will add up to what will almost certainly be a clash worthy of the name “Star Wars.”