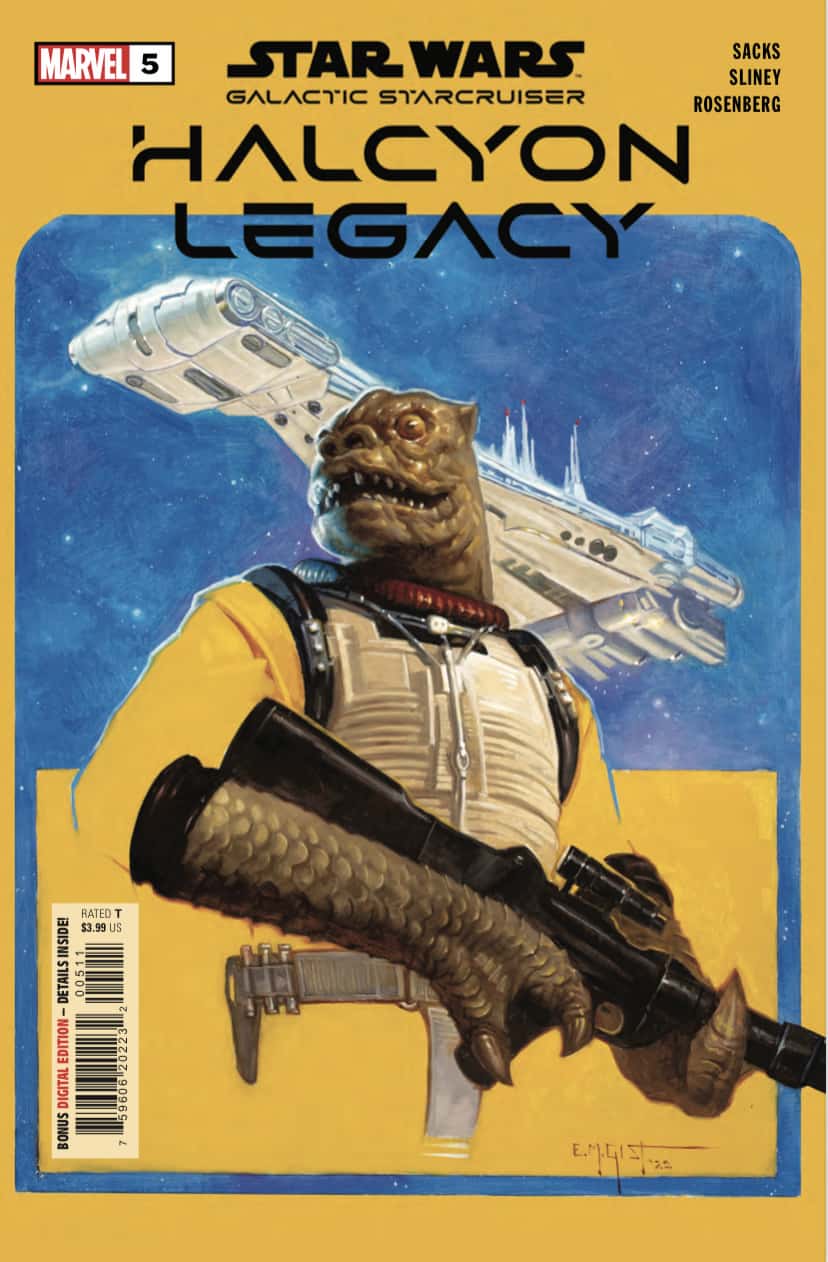 When the “Galaxy’s Edge” comic series came out, it anchored its story to the planet of Batuu where the attraction is set. It features settings and characters from the park, and had an anthology style short stories contained within each issue that were told via flashbacks about various famous Star Wars characters from the films and other comics like Doctor Aphra or Hondo Ohnaka. This new series does the exact same thing, but surrounding the “Galactic Starcruiser” attraction instead. The actual experience features cruise crew and actors portraying various specific aliens, droids, and humans and many of them appear in this series. The backstory of the Halcyon is that it is an ancient ship that has pretty much always run the same cruise line. Because it has existed for so long, the series was able to explore not only the time of the films, but that far earlier of “The High Republic” taking places hundreds of years prior. The very first issue of this series involved that exact period and came out while Phase I of the larger multimedia “High Republic” comics and books were still being released. That meant it was right at home with everything coming out when it did and fit nicely with the other stories of that time. The issues that followed featured other times like during the Clone Wars or closer to the events of Return of the Jedi. The events of the present storyline that frames the flashbacks takes place during the sequel trilogy, the time of the First Order. Because it spans “High Republic to the newest trilogy, this series effectively covers the entire current canon timeline. 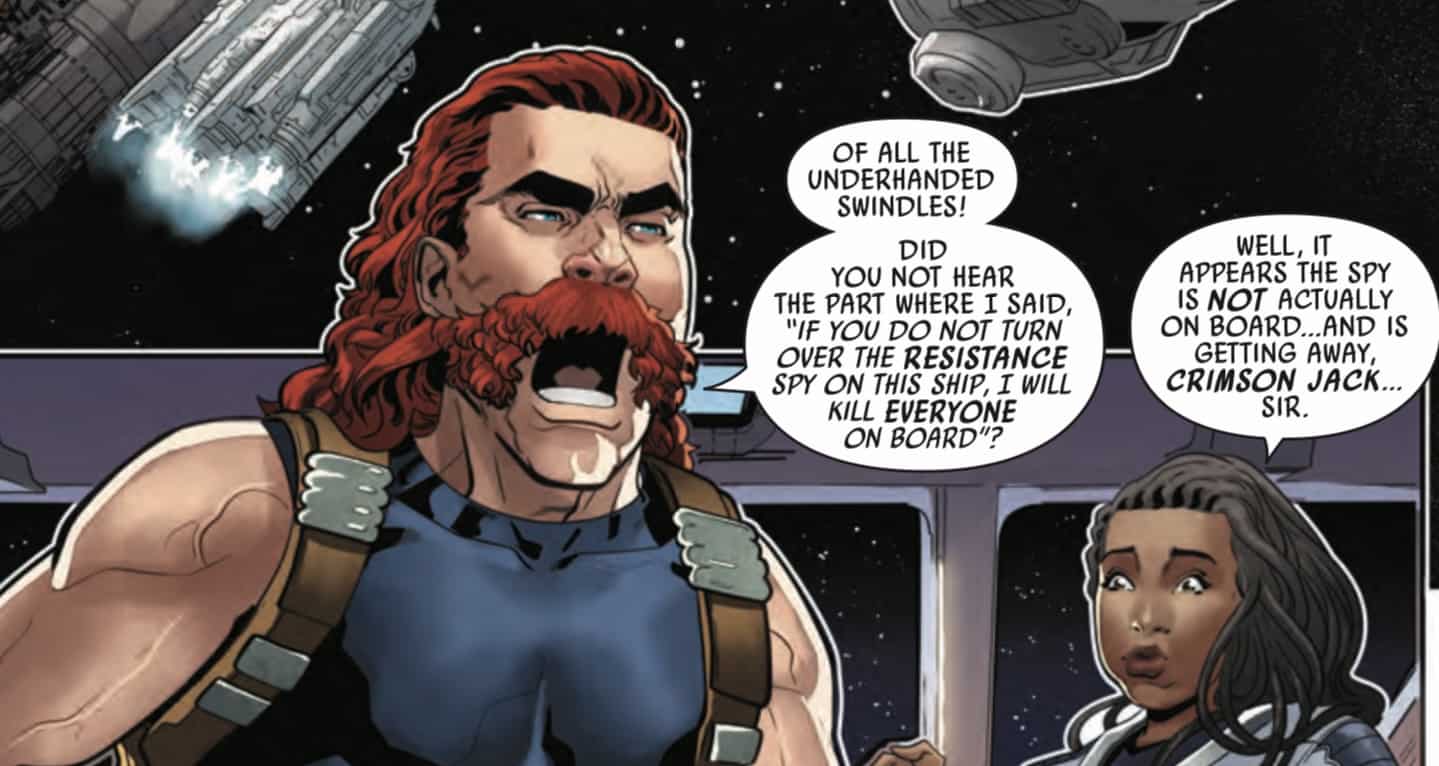 Lando, Aurra Sing, Padme Amidala are just a few of the more major characters that got featured in this series. In fact the greatest strength of the entire series is how many Star Wars stars are in it. Those who buy the graphic novel version while there, which will undoubably be available to purchase on the actual cruise, may be able to read it and look up to see the new characters from it walking around in real life. To add to the big names and attraction newbies, this series throws readers a deep reference, an over forty year old classic Star wars character as the villain in the character Crimson Jack. Crimson Jack first appeared in Star Wars issue #7 back in 1977, the year the first Star Wars was released. In fact he appeared in the first issue right after the adaptation of the original film. This was the very first Star Wars story told outside of the movie, the first of thousands. In some ways Crimson Jack is the first Expanded Universe character. He shows up to board the Millennium Falcon and manages to steal the reward that Han solo got for saving Princess Leia. Jack shows up in this series to hijack the starcruiser and capture a Resistance spy. He looks very much the same as in the original comics and carries the same swagger. With him and the slew of characters from all over Star Wars media as well as the crew of the Halcyon, the entire issue is packed with all the stories and action one could hope for. There is even many references to characters that were original to the “Galaxy’s Edge” comic series and the Disney attraction as well. It is far greater than just a tie-in to a theme park cruise. It is very much a mini-museum of Star Wars history from all over the timeline. 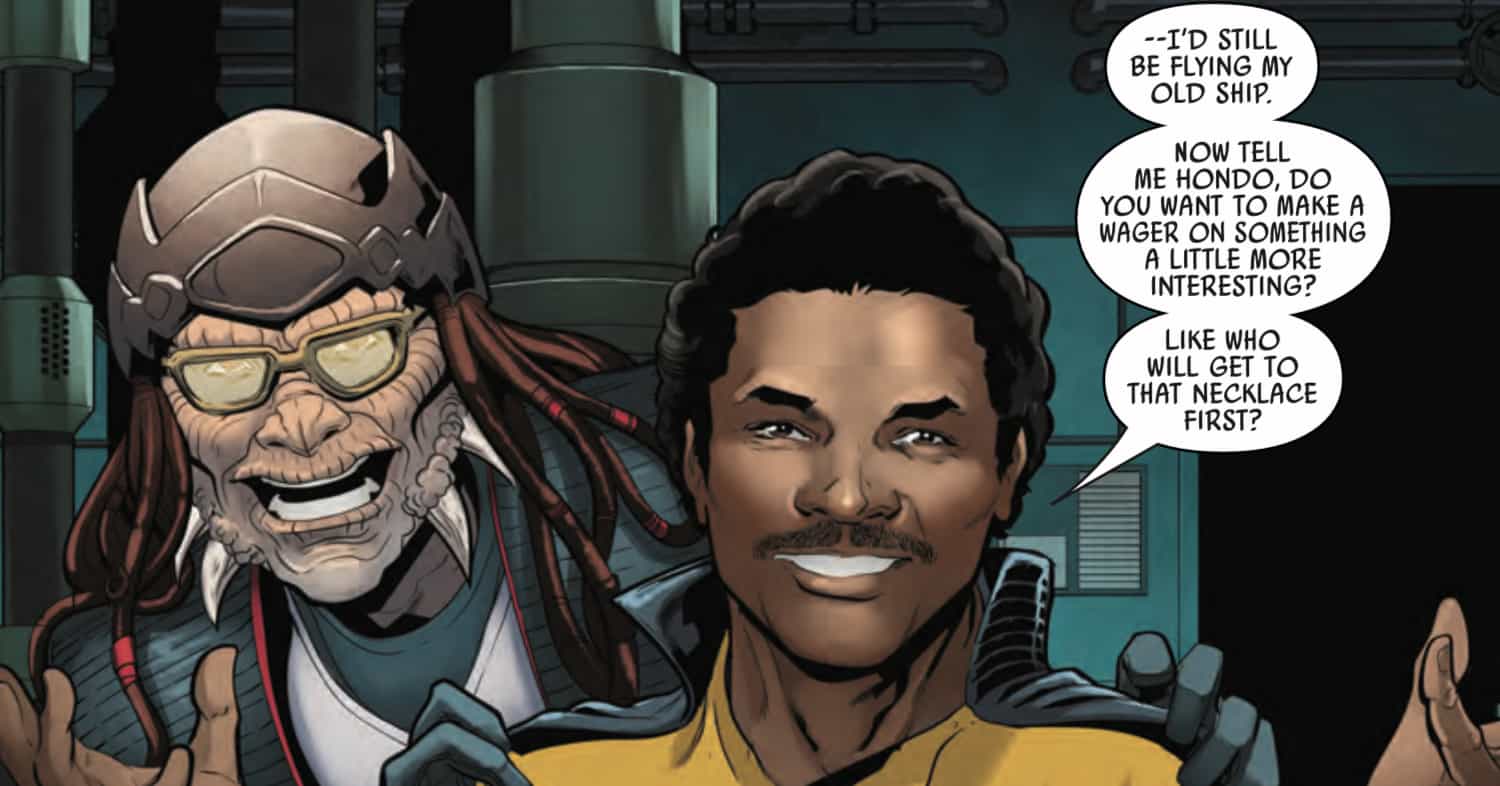 The whole series is gorgeous. The colors used are to numerous to count. The array of settings, characters, and ships leave much to see and enjoy while being drawn very well. The characterization of  faces and movements is extremely strong, and cannot be praised enough. Some of the characters are portrayed in different times, so they change with age. That is also done very well. Classic characters are instantly recognizable. At one point Asajj Ventress shows up hidden in shadows with her face completely obscured, but it is very clear to tell it is her well before it is expressly stated. The impact on the overall storyline of the entire saga can also easily be recognized as it involves so many key characters in the midst of their own major galactic affairs. This ties the saga ever tighter together. That always seems to be the goal of Marvel with Star Wars comics and this series accomplished that spectacularly. Any person who picks up this graphic novel while cruising to Batuu, will surely be quite entertained. 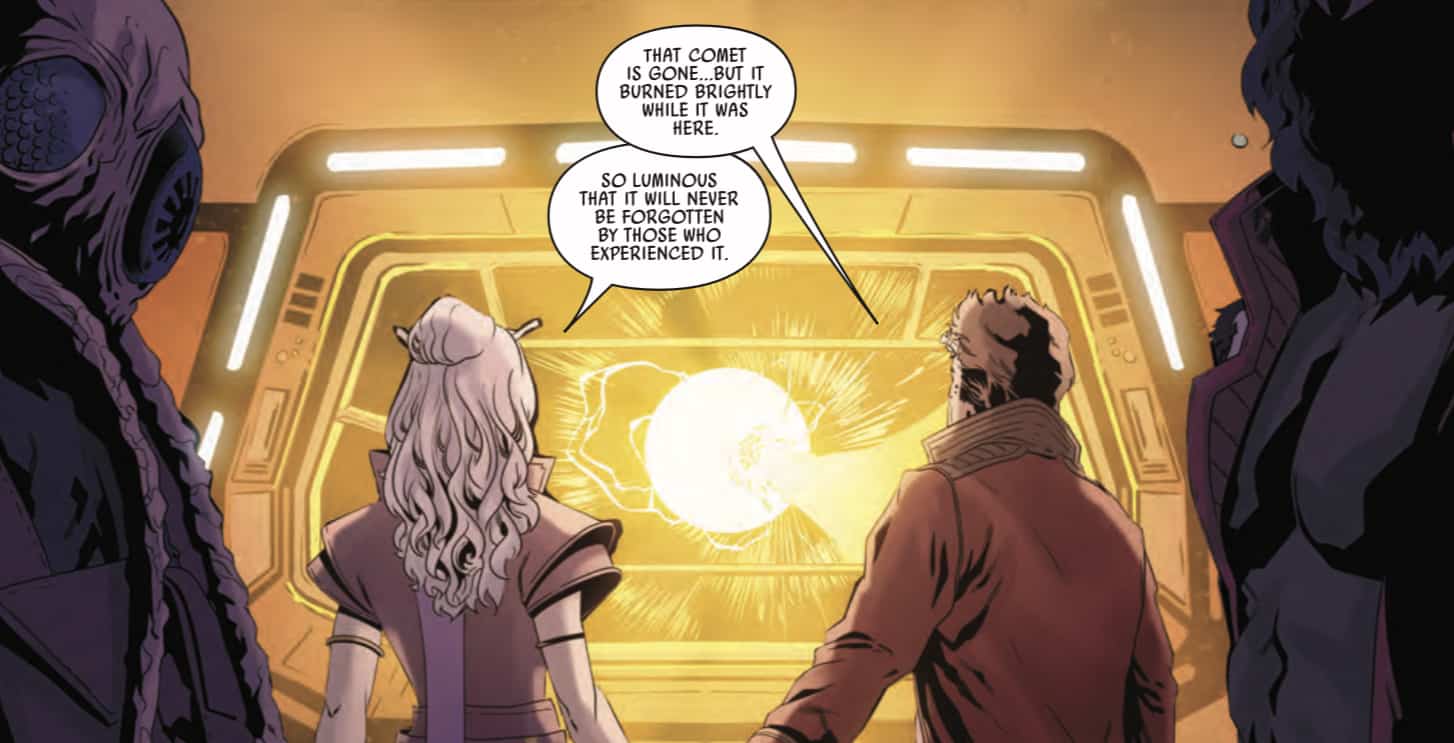 The journey of the Halcyon is at and end for now. The makers of the attraction hope fans will continue their story in person as part of “Galactic Starcruiser.” There may not be another park tie-in series for a while, but the imagineers at Disney are always cooking up something new so there is bound to be more to come in the future.