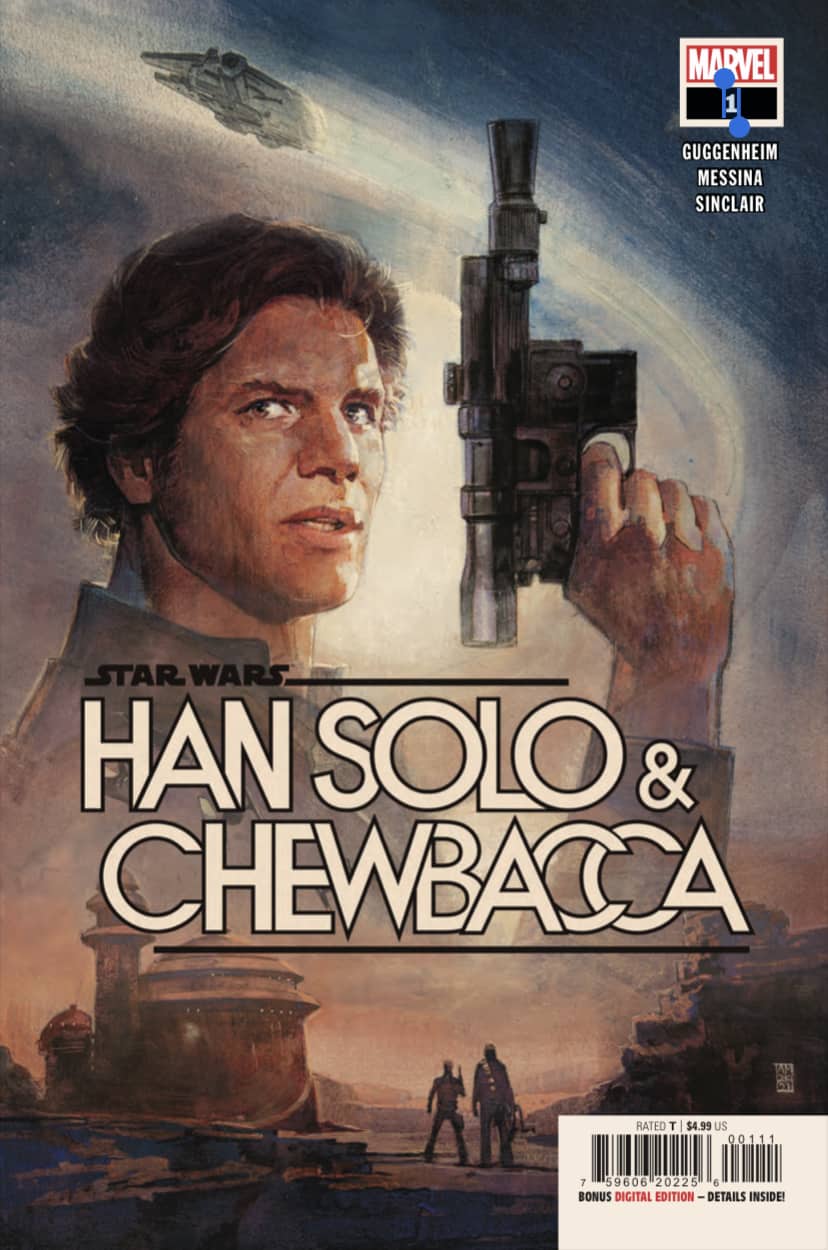 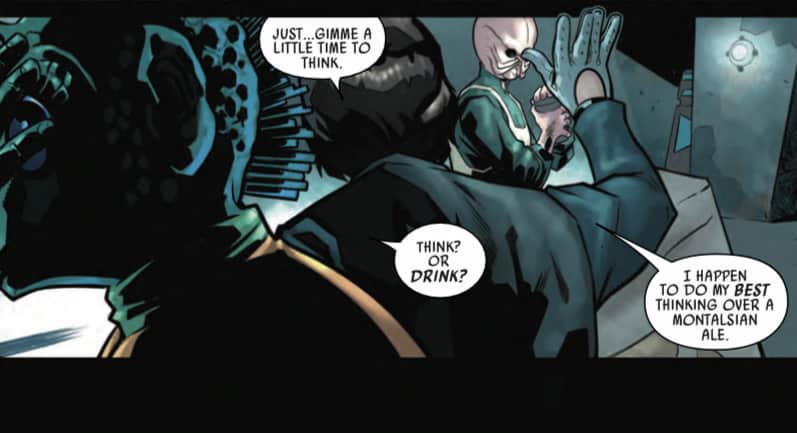 Picking up six years after Solo and two years before A New Hope, this new series seeks to fill in some of the holes left in Han Solo and Chewbacca’s past. After gaining fame with his Kessel Run record, Han follows Becket’s lead on a job on Tatooine and ends up working for Jabba the Hutt.

There is one thing that has always been clear about Han and Chewie from the very beginning and its that they have a strong past history of adventuring in the galaxy at large. The roguish partners have been popular since day one with their outlaw swagger and cool modified space freighter. Audiences first meet Han and Chewie as outlaws among outlaws, wanted by Jabba the Hutt who has put a bounty out on him. Han further shows his merit by frying poor Greedo when he came to collect on that bounty. All of that set up begs for a backstory to be told as expressed through almost vague references within dialogue. Why does Han and Greedo’s confrontation in the cantina seem so personal? What was Han and Jabba’s relationship before Han dropped his load of spice to escape the Empire? So many questions. In the old continuity, there was plenty of backstory to fill in those gaps, but the new canon had to start from scratch. That started with the film Solo. This series is an attempt to blend that film with the original, and boy does it hit the ground running. It connects both Solo and A New Hope very well, drawing from and expanding both. It even manages to add some new original characters to the story. 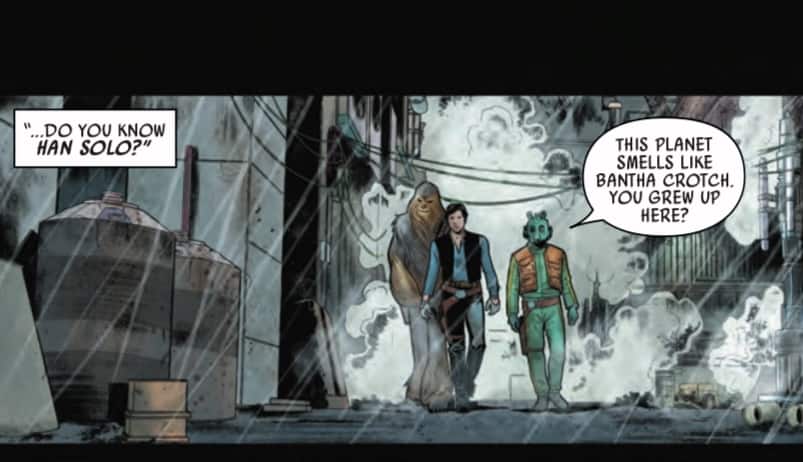 Having a great backstory is important when writing what is essentially a prequel story for a character that has been popular for well over four decades. Sologave it a nice start with Han and Chewie. It established them as characters in search of adventure and well on their way to becoming competent galactic scoundrels. It gave Han roots and a homeworld, and showed that he has been a smooth talking swindler in one form or another. This issue shows Han as a neat blend of the two versions. Han is still a bit green, but Jabba trusts him. And why not? Han always delivers. Greedo does not trust Han, but they have the same boss so they must work together. This is the backstory always promised from A New Hope. Readers get to see Han in his pre-wanted glory at the height of his game. Given the complete hatred Han and Greedo haver for each other in the original film, there is a lot of backstory to tell there as well. Their begrudging partnership is new to this universe, but not to Legends material. In the past the two have been forced to fight together or against each other. In new canon, the only backstory they had until this point was that Greedo was jealous that a lady he had a thing for happened to like Han more. This series will only enrichen that bitterness seen in the first film to be sure, but they still have a job to do. On top of all that connection to A New Hope, later in the issue Han meets a piece of his own past that is more connected to Solo. 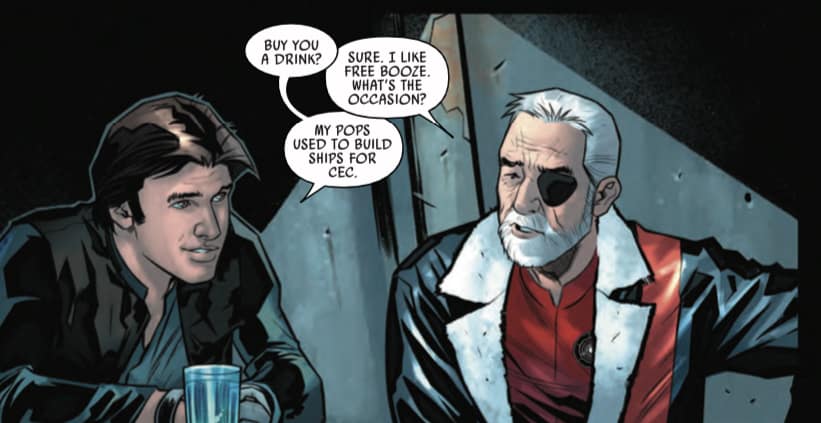 Star Wars shines best when its stories bridge one another, and this start to this series is a fine example of that. The writing is excellent. When flipping through the issue without the context of the words, this issue could look a little boring and lacking in action. The dialogue is where the gold is. There are nods to dialogue from the films peppered throughout, like references to Han shooting fist and things like that. The art is not bad, but the characterizations are much more interpretative and don’t capture the screen likenesses of characters well, not even with Chewbacca or Jabba. Greedo looks great though. The coloring is very good, and helps make the interpretive art style more grounded in familiarity. This issue is not just a great start to a series, but it enhances so many other stories involving Han and Chewbacca’s journey. More than that, it is a great part of the entire saga within this particular era. It bolsters the films, which is what the Marvel “Star Wears” comics do best. 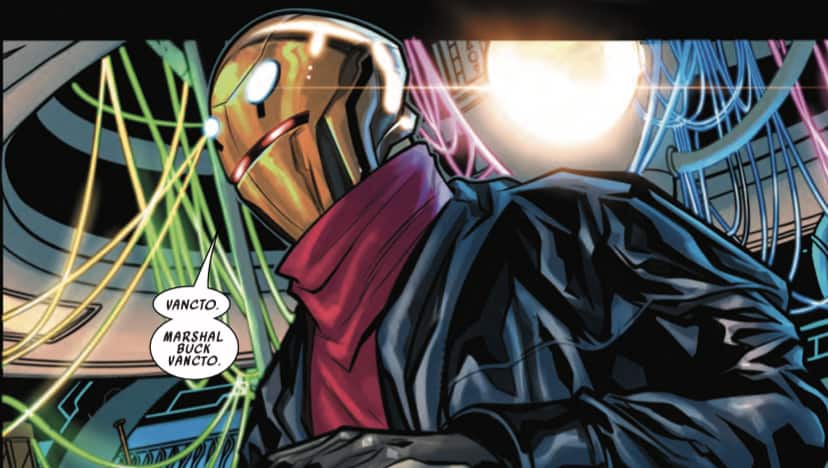 The mission is well under way, a new advisory is introduced, and Han stumbles upon a piece of his past. There are a lot of interesting directions this series can go.