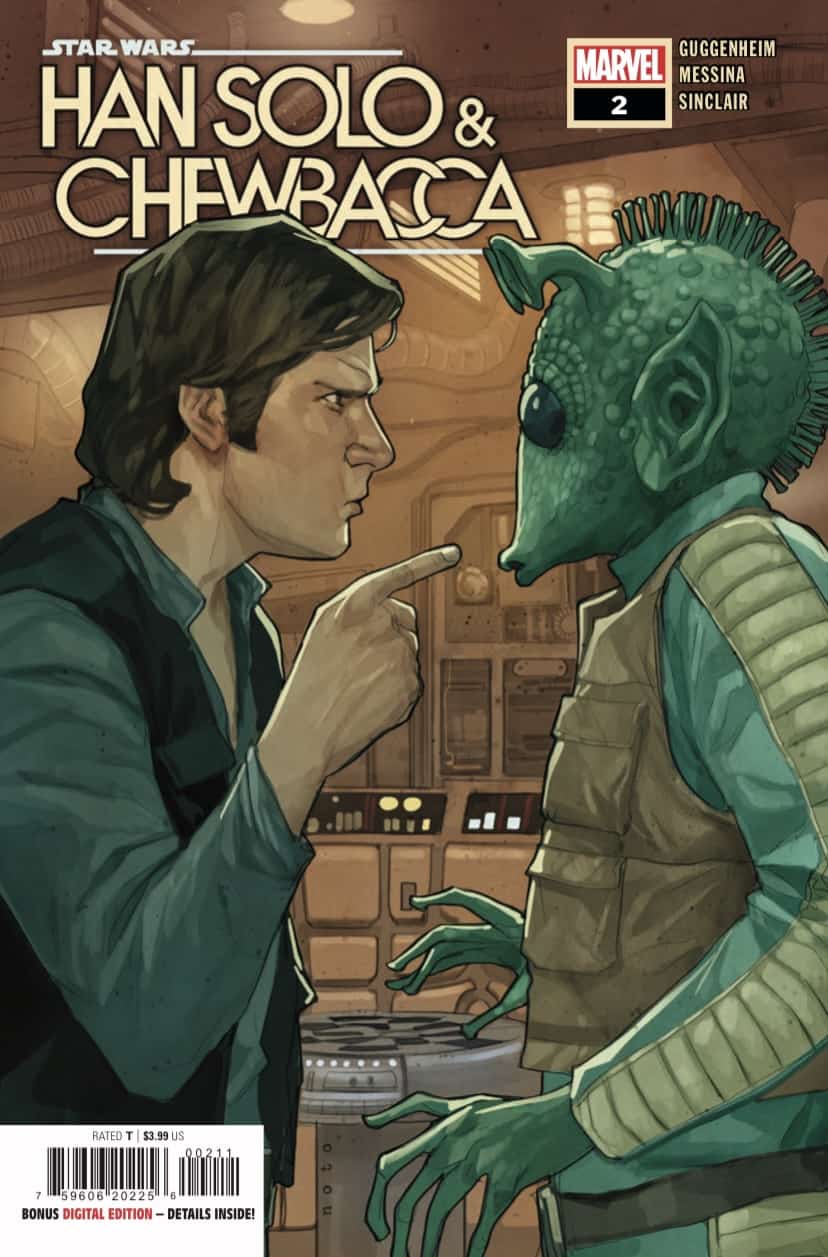 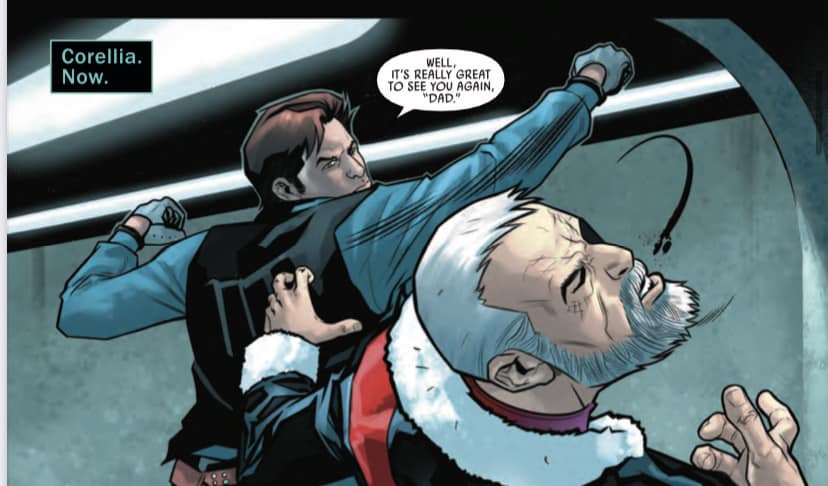 Eager to prove his merit, Han Solo takes various jobs for nefarious gangster Jabba the Hutt. Jabba has sent Han, his Wookiee copilot Chewbacca, and Greedo to Han’s homeworld of Corellia to steal the remains of an old rival of his. During their mission, Han meets an older man who claims to be his father, a man he has not seen since he was a small child.

When it comes to classic Star Wars characters, Han Solo and Chewbacca are among the most famous. Han appears in six of the eleven Star Wars films where Chewbacca managed to be in 8. On top of that, the series drops in Jabba, Greedo, Bib Fortuna for added nostalgia. To keep things fresh, a couple new characters have been added as well. This second issue picks up right where the first one ended, Han and his crew hit a dead end in their heist when Han runs into a man who may or may not be his father. InSolo, Han claims to have not been close with his father, but he knows he built ships like the Millennium Falcon. Han became a scrumrat at a very young age, running cons and schemes throughout the Corellian underground. It is not known how Han left his family. Not much else has ever been said in the new and current canon. This series delightfully plays on that by introducing a character that neither Han or the audience can trust that much strictly because so little is known about him. Han is so disconnected from his real father that he didn’t even take his last name, choosing one made up on the spot for him. This issue plays up the uncertainty of this man’s true identity, but he does put up a convincing front. Han even decides to allow him to help them on their heist, which he happily agrees to. It seems very likely that this stranger might be legit, however the whole thing seems too good to be real to not be suspect as well. 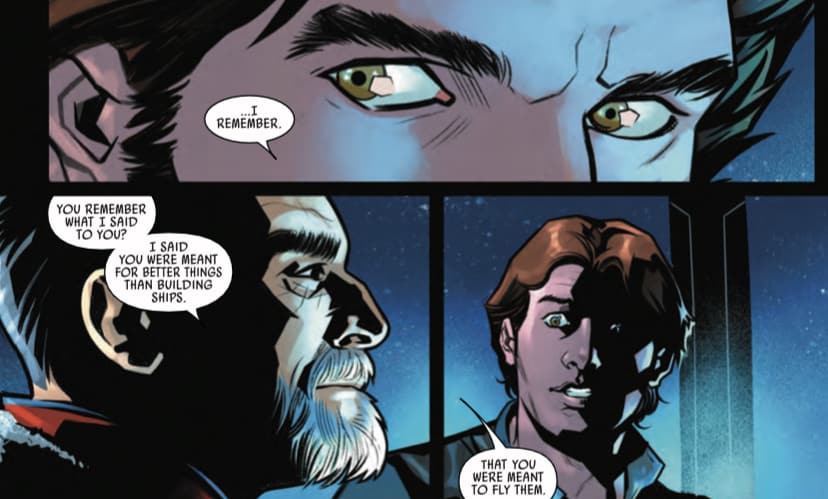 As always, Marvel “Star Wars” comics tie in the various films and shows together well, and this series is great example of that. Not only does it feel like classic A New Hope with Han, Chewie, and the Millennium Falcon favoring their looks from that film, but Greedo and Jabba being involved clearly anchor a large part of the story to the original film. Even a quick couple pages of events on Tatooine with Bib Fortuna adds to that classic feel. At the same time Corellia as a setting, Han’s father being mentioned, and a quick flash back of a familiar character from it clearly grounds the story to the Solo film. This issue further depicts Greedo’s increasing dislike of Han. It shows Big Fortuna to be the slimy opportunist he is as well. It also stays true to the character of Han as he was in both A New Hop and Solo. However there is one thing this series and this issue really missed the mark on and that’s Chewbacca. He is a titular character to this series, yet gets very little panel time or “dialogue.” He is occupied for most this issue while Han and Greedo attempt complete the actual mission. This Series might have been better call “Han Solo & Greedo.” Chewie is even absent on the cover, which although it is a fantastic image that oozes character, it should have at least both of the title characters on it. It is still only the second issue though, so there is plenty of story left in which Chewbacca could come to the forefront at some point. 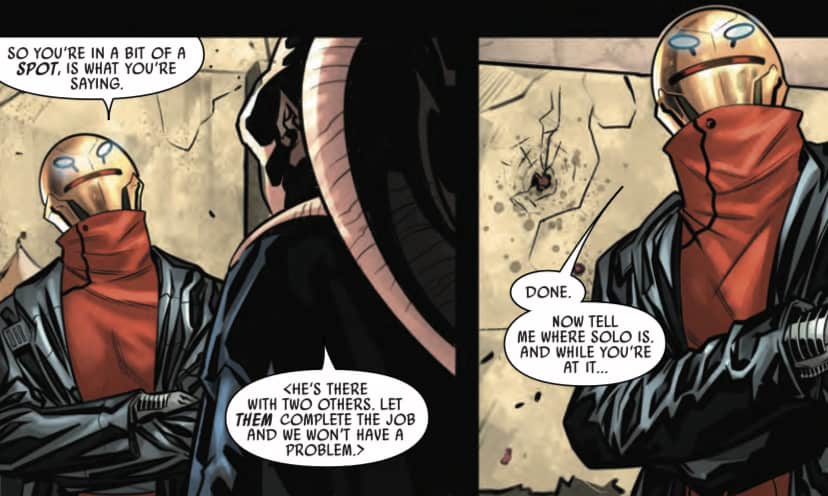 This chapter is a win on a lot of technical levels with the art. It is an extremely colorful issue. Not as much as “The High Republic,” but certainly more than “Star Wars” or “Darth Vader.” There is a ton of amazing detail with lighting, texture, and shadows. The art is fantastic, but the coloring is really what makes those elements pop. On top of those achievements, the characters from the films look almost exactly like they are supposed to. That is not always common with “Star Wars” comics, especially the self-titled series. This issue captures Han’s classic expressions well and he is very recognizable as Harrison Ford, but there is a hint of Alden Ehrenreich’s portrayal in there as well. Greedo actually look much more expressive than his film counterpart to the point that it’s a vast improvement. Chewbacca and Bib Fortuna were already very expressive characters in the films and their versions in this issue reflect that. This series has a definite impact on the overall saga and with developing Han’s character and past further. Now if the series could just do the same for Chewbacca. 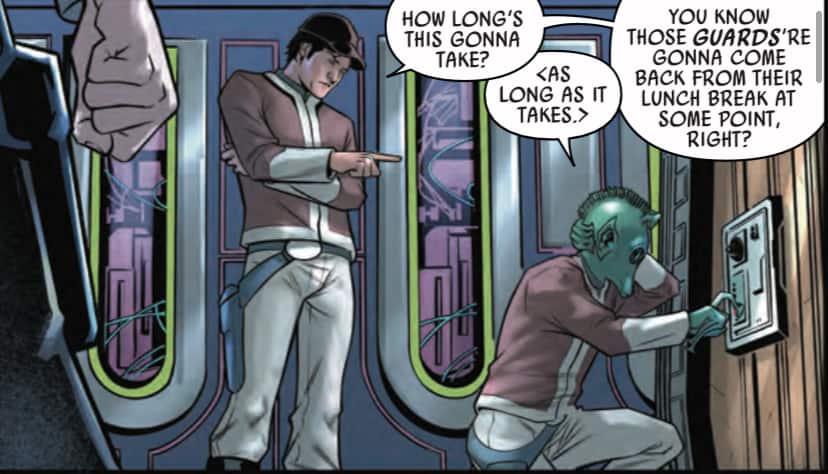 It would not be a proper Han Solo & Chewbacca ending without showing them going out of the fryer and into the oven, so close to completing their mission too. Yet readers can be sure Solo and his gang will live to fight another day and outsmart the bad guys.