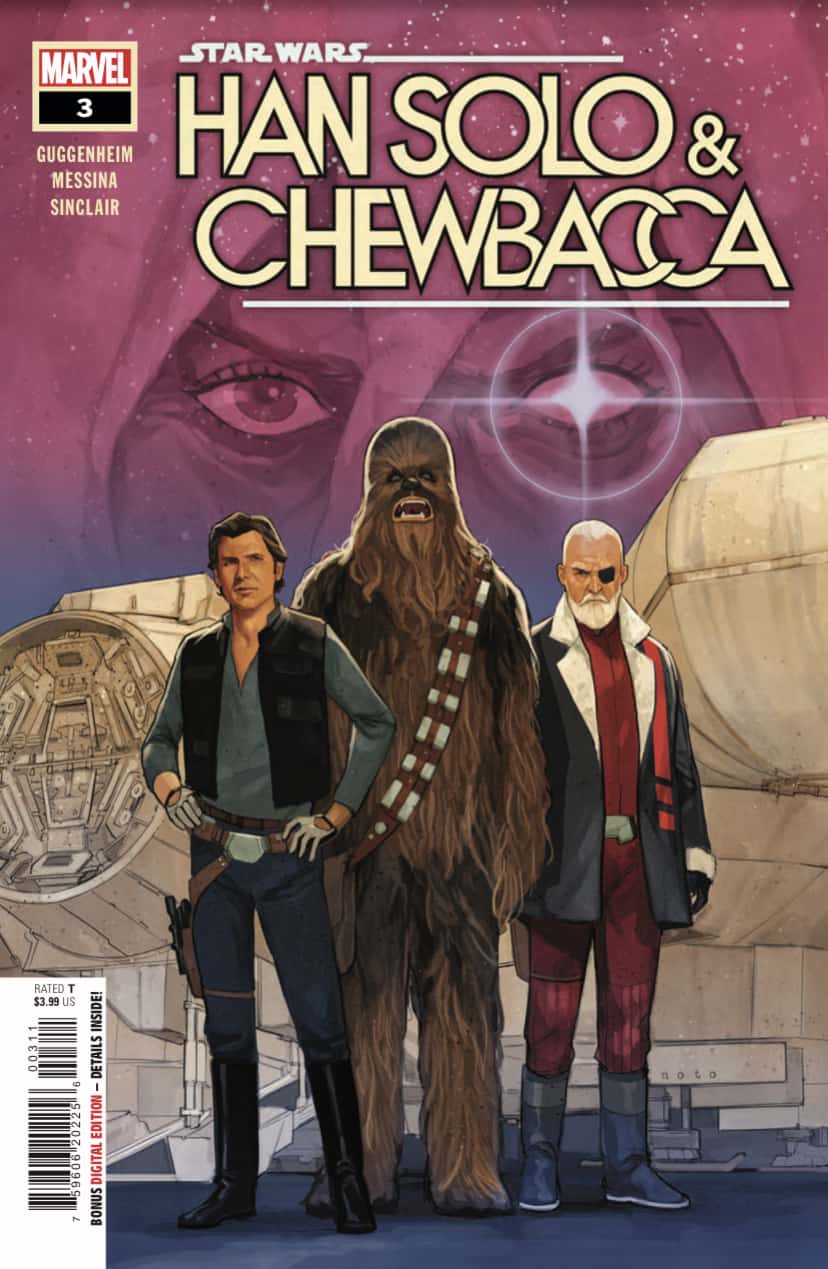 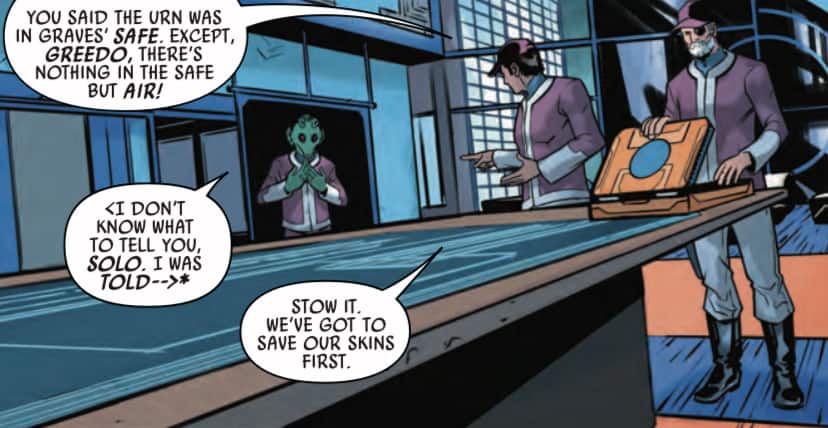 Jabba the Hutt has hired Hand Solo, Chewbacca, and Greedo to steal the ashes of a former rival. It becomes very apparent that Greedo and Han do not get along very well. To add to the tension, a man claiming to be Han’s father has joined them only to find the item they pursue missing from where they expected it to be.

The real charm of this series has been getting to see Han Solo at the top of his smuggling game well before he gets all tied up with the rebellion. He has all the cheekiness and scoundrel savoir faire from A New Hope without all the pesky heroics. This issues is a prefect example of that. This chapter presents the audience with classic Han Solo. He pulls every trick he has in the book to get out of his current scrape, including pretending to be calling for help to advert detection and a little grand theft speeder to top it off. Han does not claim to admit he has really found his father, but he does seem to at least like the guy enough to keep him around. It almost feels similar to how he eventually warmed up to Luke when they met. Most classic of all, Han pushes Greedo around and belittles him. This makes it much more believable that once Han gets a bounty on his head, Greedo will try and make sure he’s the one to bring him in. 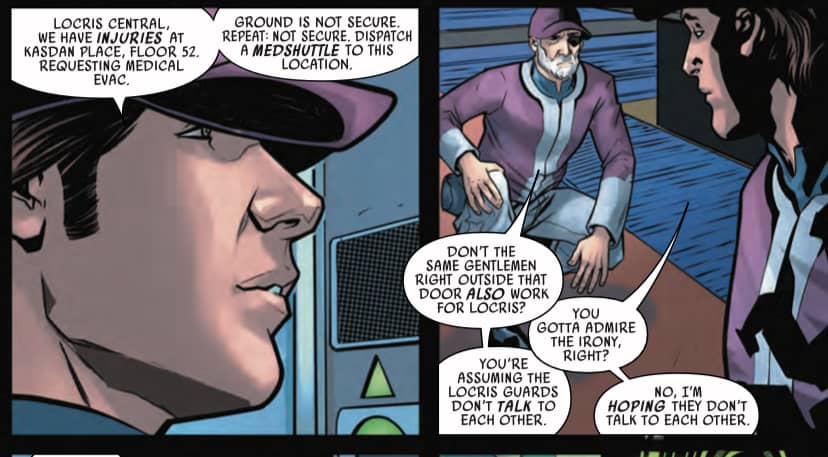 The major negative issue with this chapter remains the same since the series began. The series includes Chewbacca’s name in the title, but features him very little. He is again tasked at being a just getaway driver and lookout. He is involved in very little of the action. The series should be called “Han Solo & Greedo” or “Han Solo Possibly Meets His Dad” because they seem to be a much more predominant focus in this series. Chewbacca is a well loved hero, not only in the context of Star Wars narratively, but to the fans of the saga. It hard to see him pushed to the background. It doesn’t really detract from the quality of the story, but it would be nice if the character who shares the series title actually got to be a bigger part of the series. 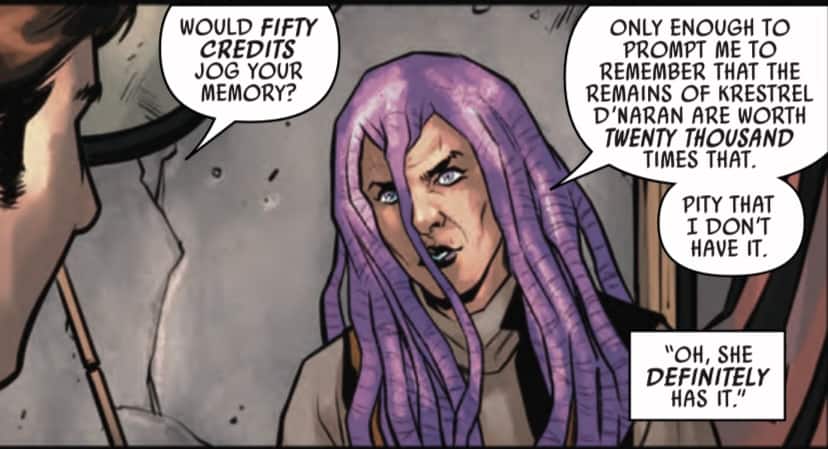 The story for this particular issue moves at a brisk pace. Lots of action and dialogue while certainly moving the plot along. It even takes a moment to let an event crossover with a flashback from a former issue of “Crimson Reign.” That part is relatively simple and takes up little time, but even a small connection like that strengthens the interconnectivity of Marvel “Star Wars” series in general. Sometimes it is nice to be remind that most of the series are happening at the same time, and even though this one does not, it can still feel like part of the same larger story. While a lot of the color seems a bit washed out in the first half, it really starts to brighten up as it goes along. It really the facial characterization that makes this one very impressive. Han seems armed with a hundred sideways smiles and expressions. His father gets to run a few expressions along his own face and even Greedo has a couple lively expressions, which is impressive since he was originally just a rubber mask. 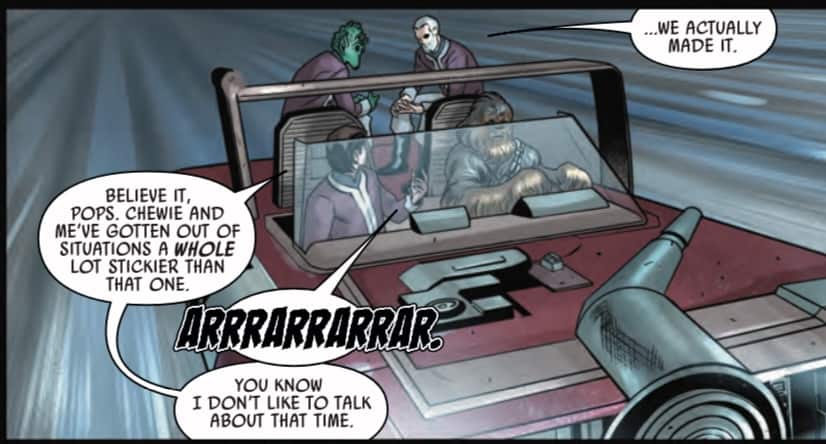 Just when Han thinks he has won, complications always arise. But just as his quick thinking and ability to improvise on the spot got him out of this tight spot, it is sure to get him out of the next one.