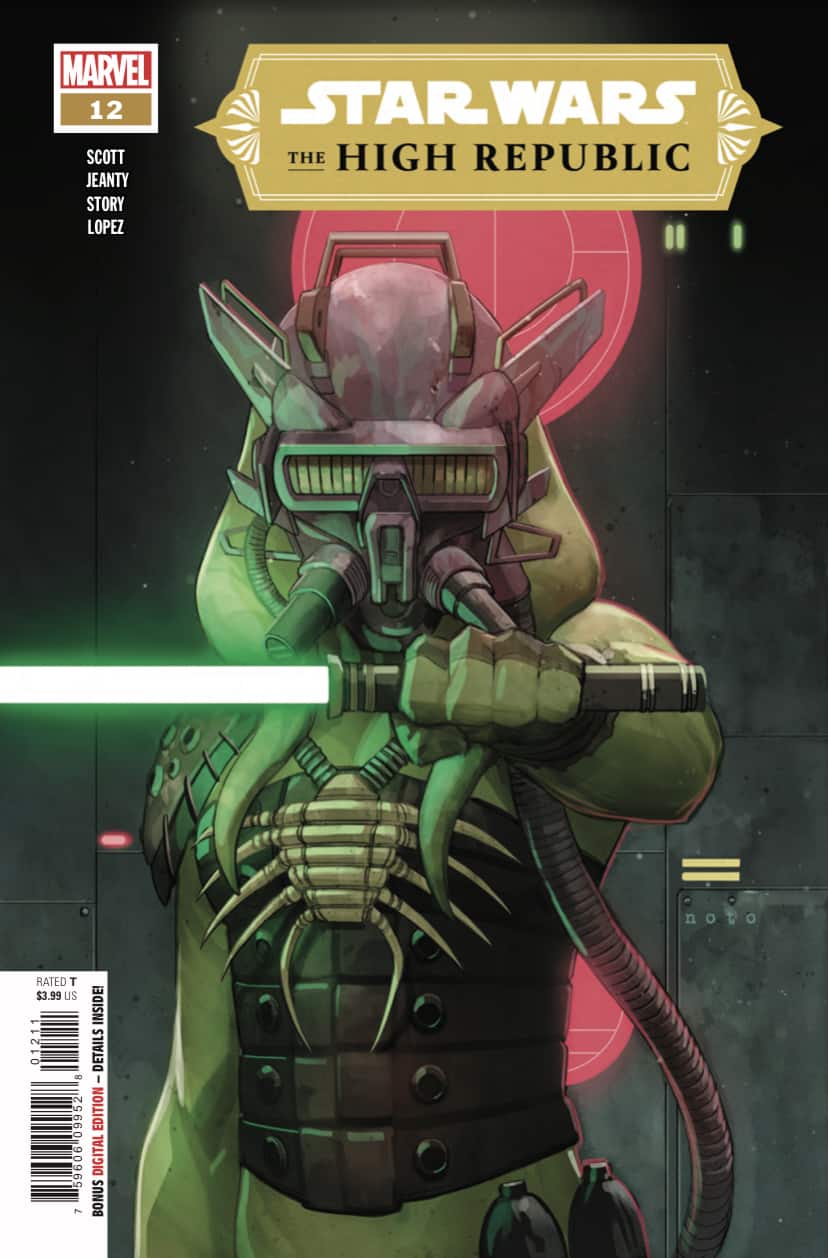 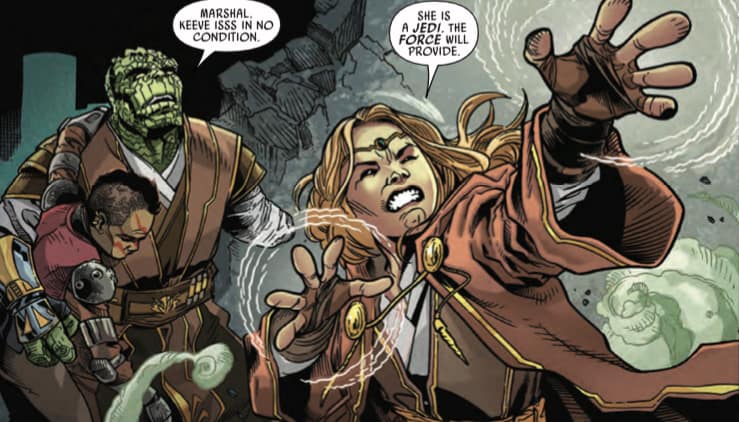 Lourna Dee has escaped the Jedi after displaying the effects of a terrifying new device that can turn them into literal dust. Starlight Beacon continues to patrol and assist the outer rim frontier, however tensions are high among the Jedi.

It is a dark time for the Republic. It seems that for every win the Jedi have against the Nihil, they suffer more loses. The Jedi of Starlight Beacon have all become shaken, scared, and sorrowful. This, of course, makes sense in a way. The Jedi of this time period were existing in the greatest era of peace and prosperity for the Republic, earning it the name “High Republic.” That was until the Nihil showed up. These Jedi, although quite skilled and extremely powerful, have never know such unrelenting pain and onslaught from any enemy. The Nihil represent a legion of enemies. Although the Jedi have fought bravely and well throughout the conflict so far, the sheer weight of it is starting to reek havoc on their morale. 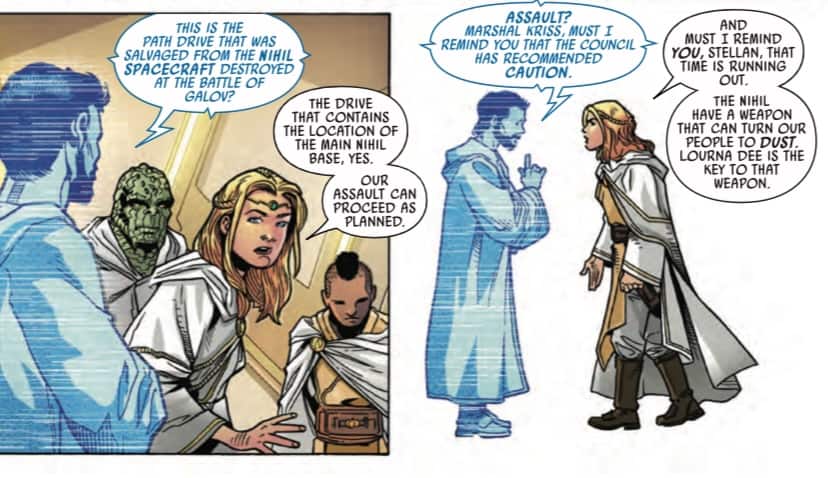 This isn’t what anyone would call a “fun issue.” It is far from it. Although it does set the stage for the operation the Jedi expect to pull off next, it is also filled with such desperation and sadness for all of the main characters. Avar is the most famous golden child Jedi of the order. She is known for being calm and precise as a Jedi warrior, yet now she is impulsive, temperamental, and she is not listening to anyone. Keeve feels responsible for her friends who have been lost the Nihli’s  anti-Jedi weapon. She has always doubted herself, but now she feels she has personally harmed the Jedi by her actions. To make matters worse, Master Maru has asked her to do a task she does not feel worthy of. Sskeer is dealing with no longer being able to use The Force. He feels humbled and useless. On top of all that he must finally tell his best former student, Keeve Trennis, about the crippling and potentially fatal condition that he is now in. 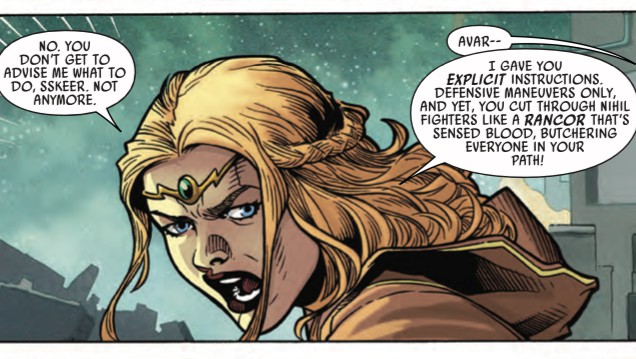 This will undoubtedly end up being a key issue in the overall greater “High Republic” event. If any fans have been paying attention to the titles of the “High Republic” books coming out next month, they will notice a dark tend. This issue is very much a tipping point for the Jedi down a darker path. There have been rumors of Dark Side characters showing up for a while, the most notable surrounding the announcement of the upcoming “Accolyte” TV series. So far this series has featured little in Force-using villains, so their appearance would add a new level of danger to the “High Republic” series. It is even possible that some Jedi, tormented by the events of this crisis, may possibly fall to the Dark Side. If that were to be the case, this issue could possibly be the beginnings of that. All three main characters are bathing in emotions that can lead to the Dark Side. However, as the events of this issue play out, there is renewed hope as the Jedi prepare to attack the Nihil where they live. Perhaps darkness doesn’t take full hold in this issue, but the seeds are there. 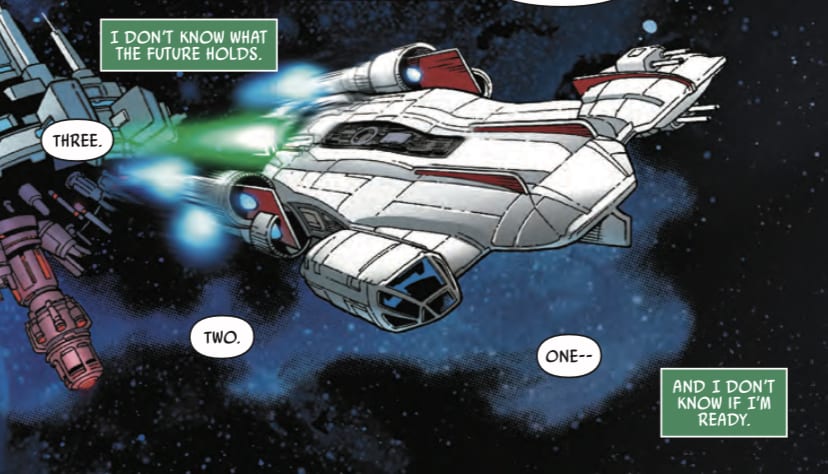 It is time for a desperate but well orchestrated attack, and the Jedi have the renewed confidence to come through. But what kind of doubts and fears still linger in the battle-weary warriors of Starlight Beacon?