Star Wars – Hyperspace Stories #1: The Return of the Dark Horse 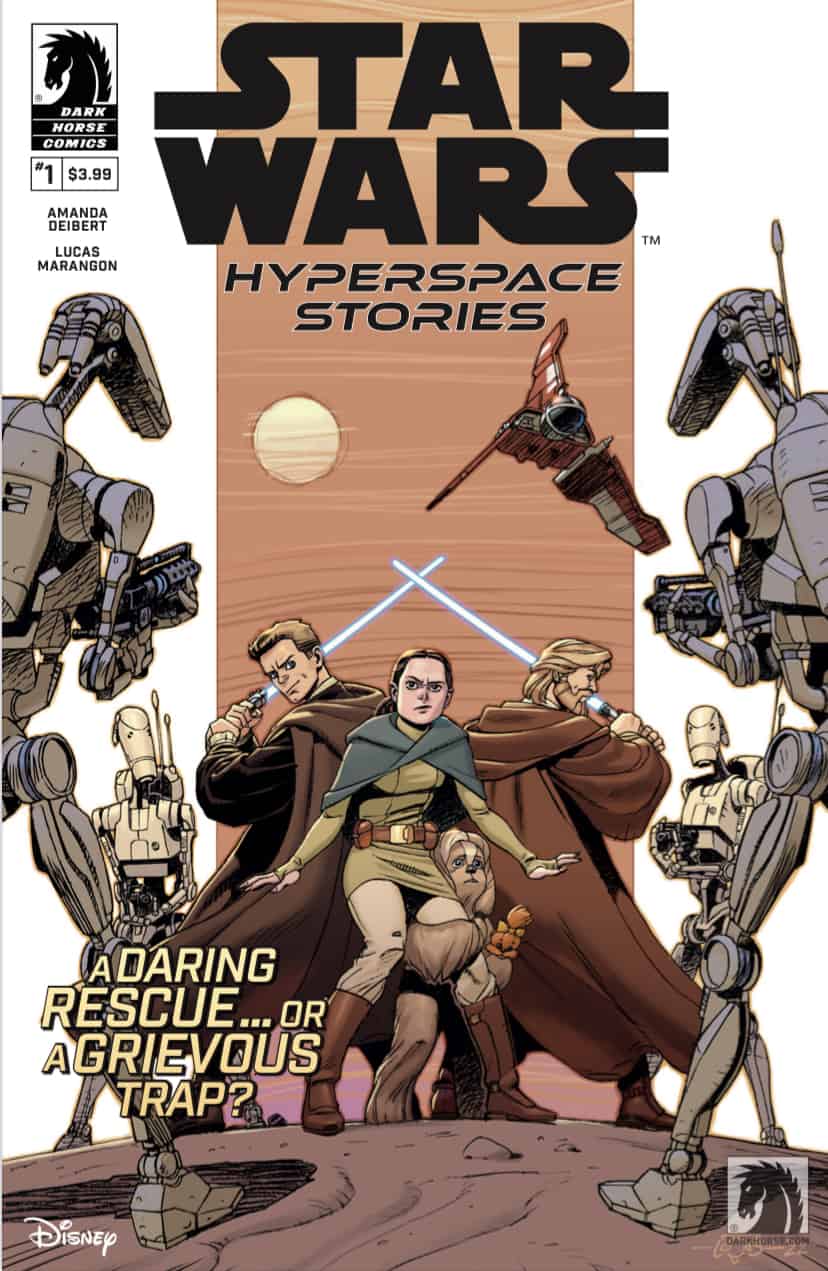 Dark Horse started doing Star Wars comics way back in the early 90s with “Dark Empire,” reprints of “Star Wars” comic strips rebrtanded as “Classic Star Wars,” and “Tales of the Jedi.” For over twenty years afterward, Dark Horse continued to be the only comic publisher for the franchise. Sadly, after the purchase of Lucasfilm by Disney, Dark Horse lost the rights in favor Disney’s Marvel brand. After 7 years, Dark Horse is now back with news series and graphic novels set in the galaxy far, far away that it once made so much richer.

Dark Horse had been a go-to for any licenses that needed a comic series. Franchises like Alien, Predator, Terminator, and Buffy the Vampire Slayer all had great success with them, although Star Wars outshined them all. All of those titles were owned by Fox Pictures, and when Disney also bought Fox, Dark Horse lost those title too. That was bitter after loosing Star Wars. Since then the company has not held the forefront presence they once had. However once Marvel took over they hit the ground running with “Star Wars” comics, and have been producing a huge amount of content ever since. They now produce six separate series with a third major multi-series crossover event on the way. Dark Horse now steps in to produce shorter content aimed as a younger audience that can be easier to digest and can hop around to different eras. Thus began “Hyperspace Stories” which aims to do just that. By doing stories this way, readers can even miss issues and still not be missing parts of any larger story as each issue self contained. This is not at all like Marvel’s series, often entwinning all their series to the point of being difficult to catch up on. That alone proves that this niche Dark Horse is aiming at is necessary to explore. 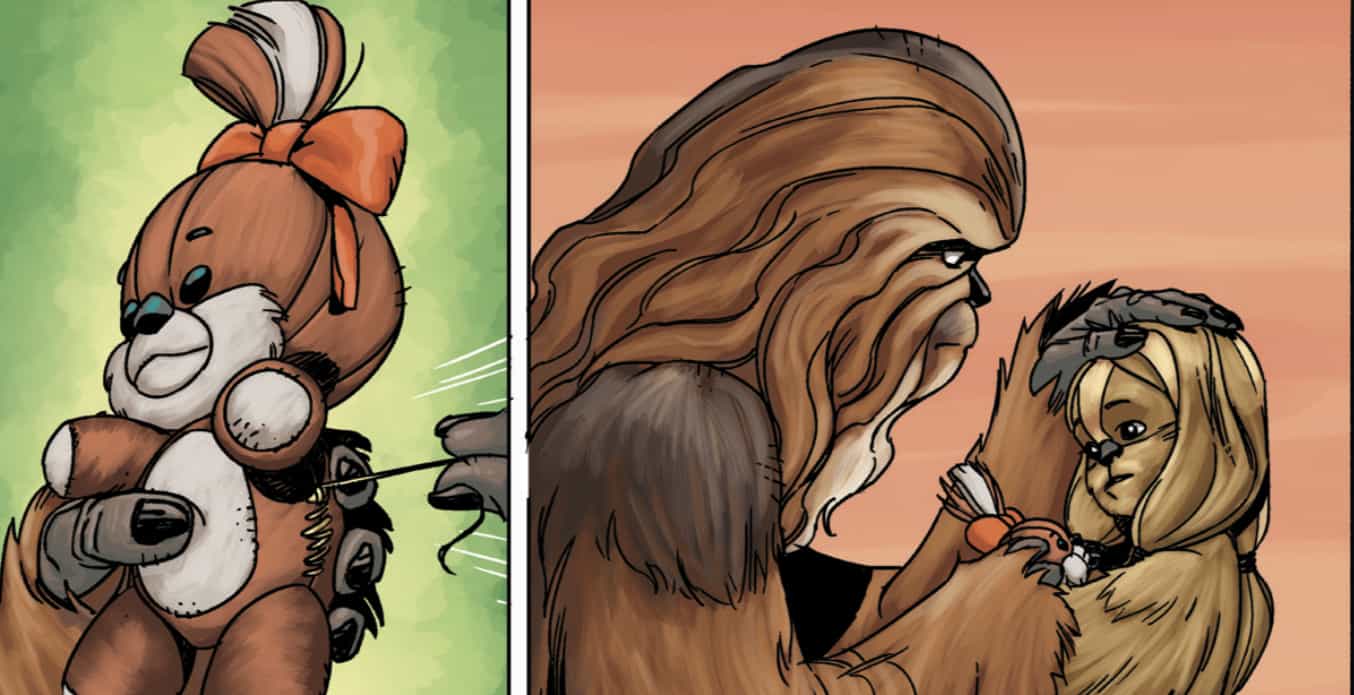 As great as it is to have Dark Horse back, it cannot be understated that it does so on top of the ashes of IDW Comics “Star Wars” comics, which published Star Wars content for many years. Their books were aimed at the exact same audience of kids and although they did have various ongoing series, the bulk of their content were short stories that jump over all eras. It seems Disney and Dark Horse knew it was a good formula and just basically switched publishers, but not style. The big difference between the two lies in how short the stories are. IDW issues tended to have two or three short tales spread over an issue, usually as a flashback stories told by a charter within another story. This issue seems like a cross between old Dark Horse and newer IDW Star Wars comics. This first Issue of “Hyperspace Stories” is one self contained story from beginning to end. This first issue involves Padme, Anakin, and Obi-Wan during the time of CGI Clone Wars series. It plays out just like an episode of the show would have, although without the exact visual style. The ad for the next issue features Luke and Leia and different writers and artist. This indicated that Dark Horse is more than ready to explore every Star wars time period as well as showcasing their various talented team members month to month. If IDW needed a replacement, a better choice could not have been than Dark Horse.

The art style and coloring is so completely “Dark Horse Star Wars.” The art is done by Lucas Marangon, who used to do various light hearted titles for the “Star Wars Tales” and “Tag and Bink” series. This feels familiar and new at the same time. Marangon has a very nice blend of cartoony and comic booky. It was a perfect style  for his title, and plays just as whimsically and fun as it did in the old days. The only problem with having each issue take place in self contained stories is that is does not allow for much impact on the overall saga. It seems more like each issue will be not necessarily bad stories, but ones that can be tossed aside or ignores even if they count as canon. That may change once Dark Horse begins doing “High Republic” comics, but it is hard to tell from the first issue of this series what kind of impact, if any, each issue the content will have on the overall saga. The writer, Amanda Deibert is relatively new to Star wars comics, but offers a fun and sometimes funny Clone Wars style adventure that hits all the points any given episode would. It will be neat to see both Marangon and Deibert continue with “Star Wars” comic in other series, as well as hopefully again later in this series too. This issue was a great send off for this new title, and it has a lot to do with them both.

The fun is just beginning as this series kicks off. Further down the line promises stories and characters from the various eras from all over the Star Wars Galaxy.

Star Wars – Hyperspace Stories #1: The Return of the Dark Horse