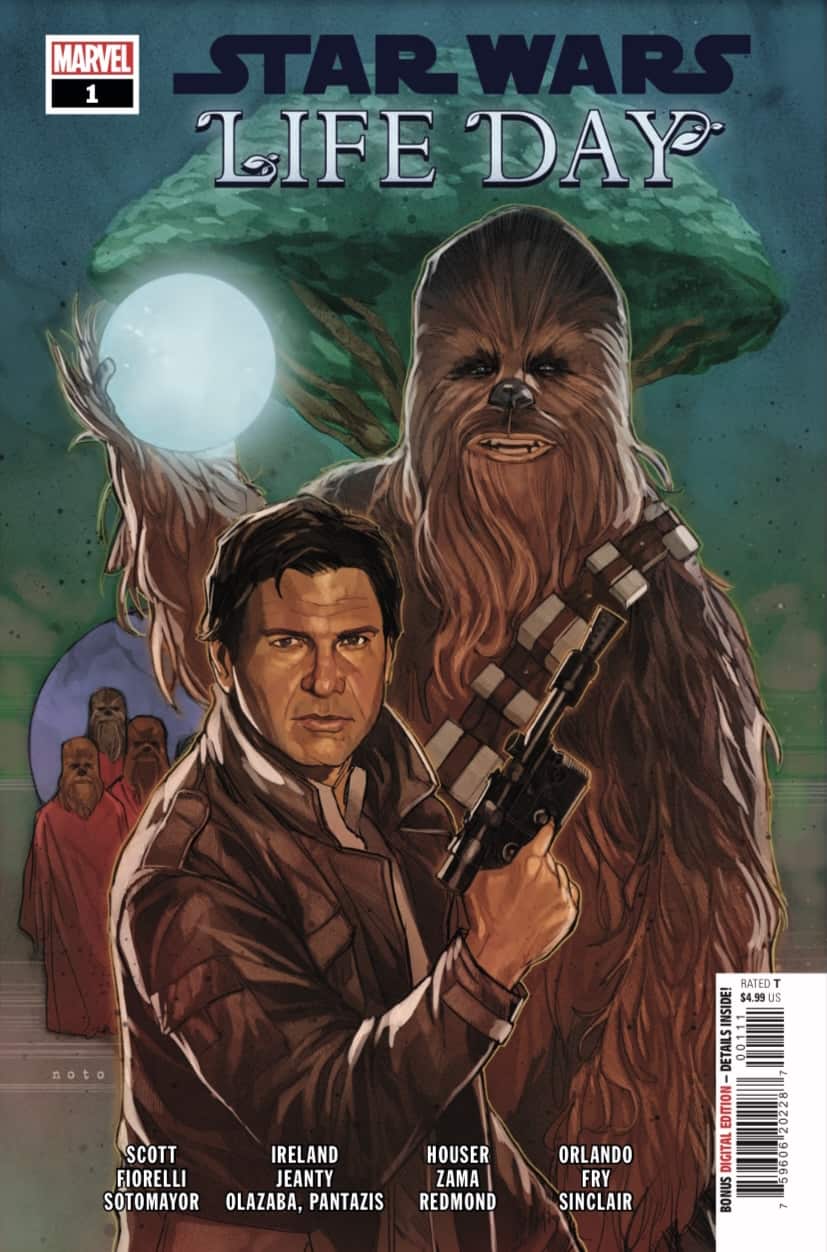 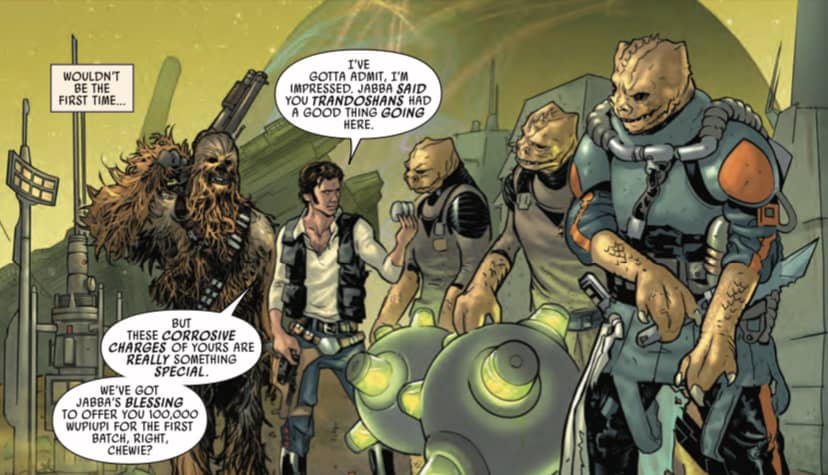 The Wookiee Holiday of Life Day has its roots almost as far back as the original Star Wars film. It was originally from the infamous Star Wars Holiday Specialfrom 1978. Since then it has grown into a tradition beings from all over the galaxy can enjoy. However, over the years the sacred day has brought Han Solo much trouble. This issue is a collection of tales of Life Days past.

Life Day has been seeing a huge increase in popularity this year. Star Wars fans celebrate the anniversary of the ill-fated Star wars Holiday Special’s first airing on November 17, 1978 as a real holiday. Earlier on in 2021 Disney+ released the Boba Fett animated short, “The Faithful Wookiee,” that originally appeared in that special. Life Day merchandise also became more prevalent this year. An anthology of Life Day Treasury of short stories was also released, and of course this issue is pretty much along those same lines. It is not a far stretch to say that this increased knowledge of Life Day can possibly trace its way back to a short reference in the first episode of The Mandalorian. 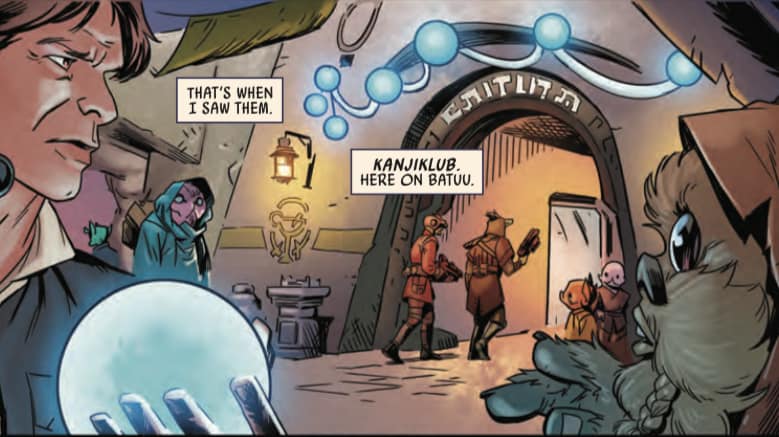 This issue, which is a bit longer than a typical one, begins with The Mandalorian era Han Solo. He is on Batuu, the planet from Star Wars Galax’s Edge, being chased by Kanjiklub, the gangsters who track Han down in The Force Awakens. Already the issue is all over Star Wars lore. As the story quickly progresses, the issue cuts to Han’s memories and other stories from The Rebellion era, High Republic, and the time period of Solo. Each segment has different writers and artists and all take place on Life Day. In this way the issue revisits Life Day in many of the most popular Star Wars eras from a different perspective, although most do revolve around Han and Chewbacca specifically. Another great little bonus was the inclusion of Chewbacca’s father Attichitcuk in the High Republictale. That era takes place about two hundred and thirty years before the original Star Wars film, in which Chewbacca was two hundred years old. That indicated that his father was still a young Wookiee, soon to have a family. The significance here is that this character was originally from the Star Wars Holiday Special. Although canonized by being mentioned in various books surrounding the Solo film as well as the Life Day treasury, this is Attichitcuk’s first visual canonical appearance. 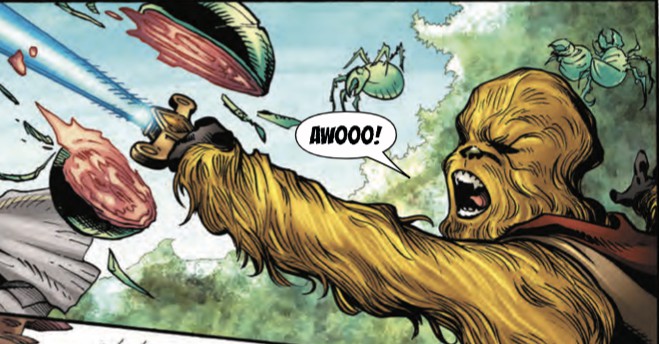 This issue was full of Marvel talent, yet somehow it didn’t feel very “Marvel.” In fact, it felt more like an IDW Star Wars comic. Almost all of their issues formatted in an anthology style, with various different writers and artists working on each tale. It also has the lighthearted family friendly atmosphere of a “Star Wars Adventures” issue. Even the art is a bit more cartoonish in each story, like any IDW offering. Despite this, the issue clearly has the playful Marvel style of overlapping, tilting and slicing panels. It also has the amazing and very clear lettering that are apparent in any of Marvel’s current issues. In many ways this issue is a best of both worlds as well as a nice trip through time with Han and Chewbacca. The only problem is that this issue is a single release and not a series. Perhaps readers will get another holiday special next year. 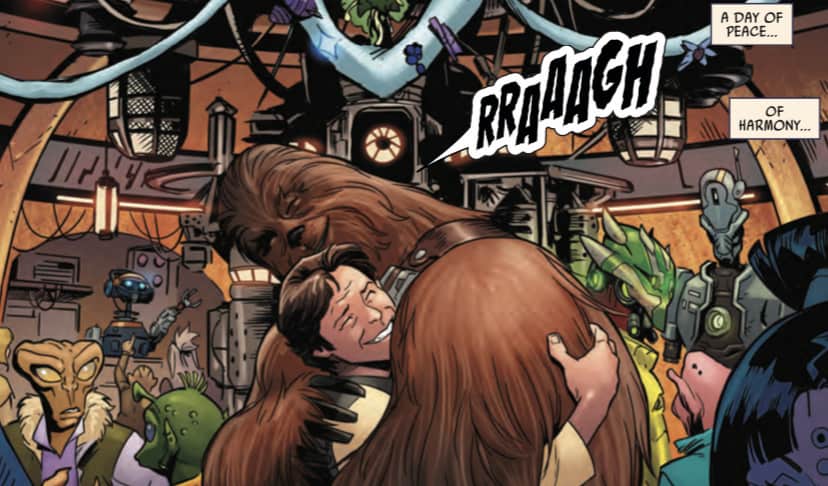 Han proves time and time again that he will do anything to keep the spirit alive for Chewbacca year after year. Their kind of friendship and loyalty is the exact kind of spirit everyone should be thinking about this time of year. Smugglers and scoundrels they may be, but they sure know how to celebrate.