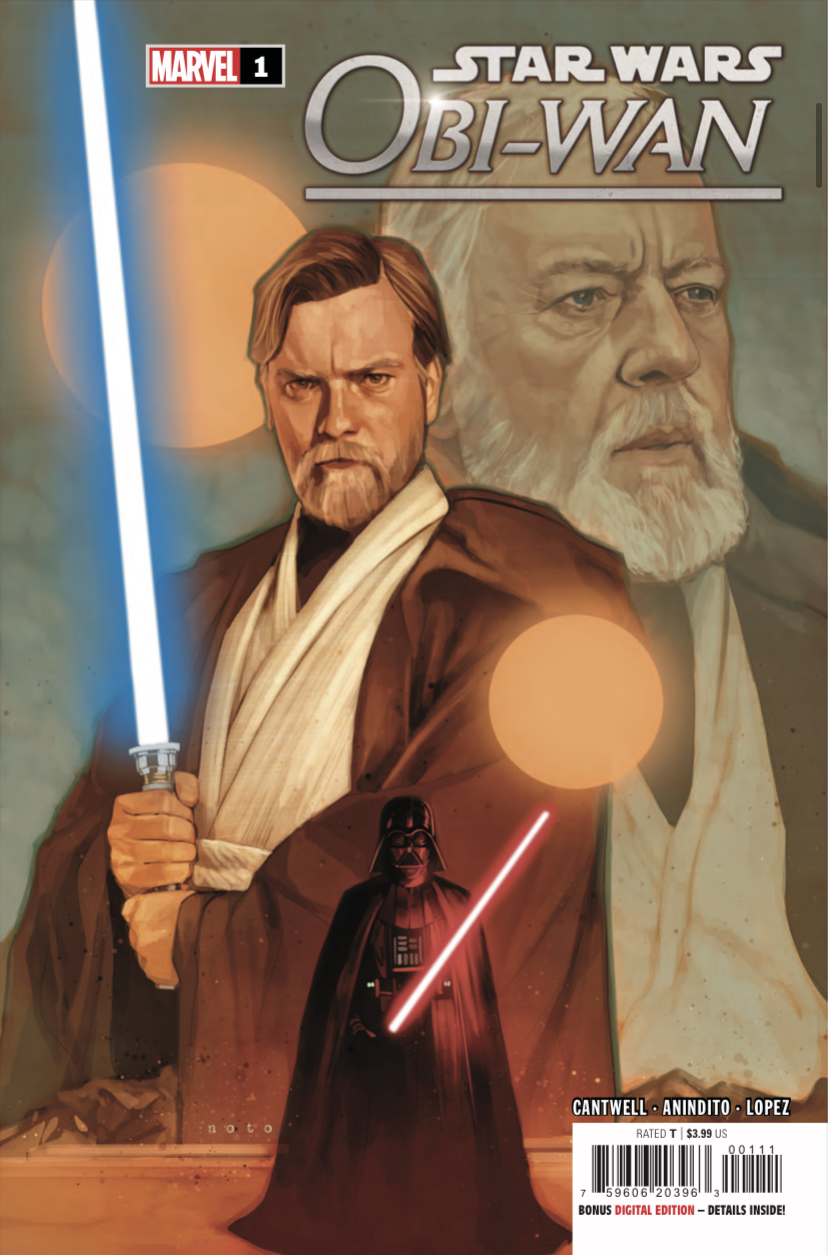 Obi-Wan Kenobi has been a Star Wars legend since day one when the original Star Wars film premiered forty five years ago this month. The wise old hermit acted as a guide and mentor to Luke Skywalker as well as a teacher to his father for the next generation of fans. He has been one of the strongest characters in the entire saga, however his exploits have been few and far between in the past couple years. Lucasfilm is opening new chapters for this character and this series is the first act.

With the Disney+ “Kenobi” series starting later on this month, it seemed only fitting to have an “Obi-Wan” comic series to go with it. Like the show, this new series explores Obi-Wan on Tatooine with flashbacks to his life beforehand. The show tells of Kenobi after the events of Revenge of the Sith, whereas this series has recollections of his past at much younger stages starting well before The Phantom Menace. The comic series also takes place just before A New Hope, with the original Alec Guiness style Kenobi from the original film as opposed to the younger looking Ewan McGregor in the show. These two entities revolving around the same character are sure to make them excellent companion pieces to one another. This further accomplishes the “Star Wars” comics goal of supporting live action material with supplemental stories, something for which the Marvel comics excel at. 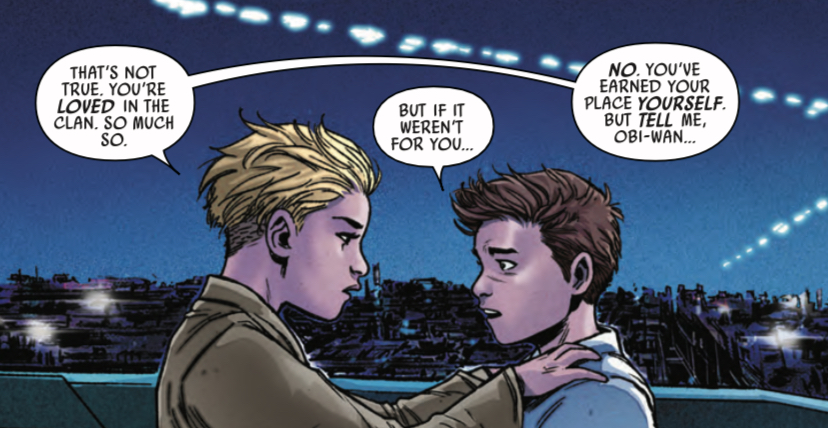 As previously mentioned, this series will be comprised of flashbacks told through Obi-Wan writing in his journal. It was established in the first of the modern Marvel “Star Wars” series that Obi-Wan left a journal for Luke to read. This lines up directly with that. The storytelling device used to prompt these writing is interesting. On Tatooine there are occasional sandstorms that must be waited out. Before a particularly bad storm, Kenobi hunkers down in his hut and begins to write to pass the time. This also acts as a great metaphor. Kenobi feels the storm on the horizon. That could be taken literally, or it could mean he perceives his new adventure he will soon have during the events of A New Hope and he knows he must write down his story before it is too late.Presumably each issue will jump to a different story along his timeline as the Jedi sits trapped inside writing it all out. This first issue starts out with Obi-Wan as a child, just shy of earning his Padawan title. He recounts his first friend, his first adventure outside of the Jedi temple, and his first time at bending the rules. It is a natural way to start a series like this. It is relatively usual to get stories about Obi-Wan this young. The old Legends material had some kid friendly early reader books of that era, but that’s mostly it. The new Canon has little to no stories of him from this age, so this issue hold a bit more narrative weight to it for portraying this version of the future master. 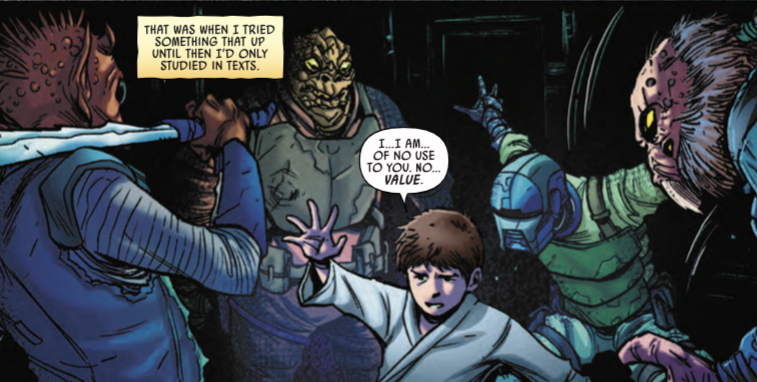 This issue hits the ground running strong with the art. The moments with Kenobi on Tatooine look like weathered paintings, showing old Ben Kenobi with stern looks upon his face. The colors are washed out and dull like the desert planet it represents with its two suns bearing down unescapable light. When the issue switched to the flashback, The art becomes for almost cartoony with thick outlines and wildly varying facial expressions on characters. It almost seems to evoke the spirits of IDW or Dark Horse comics, which both often used a softer animated look with their “Star Wars” comics. To top of the stark differences to the Tatooine parts, the flashbacks all have colors to remind the viewer of night and dark with many shadows and starry skies. The material within the issue actually has a deep impact on the saga as a whole, which is often not the case with many “Star Wars” comic series. Many times a comic miniseries based around a single character is more of an extra tale about them without affecting how the character is perceived elsewhere. That is not the case here, which is mostly due to the series being focused on such a major character in various time periods important to Obi-Wan’s personal development. What happens in this series is meant to help bridge Prequel and Original Trilogy versions of the character in a time when not much is known about him. It acts to fill in the holes in Kenobi’s overall story. 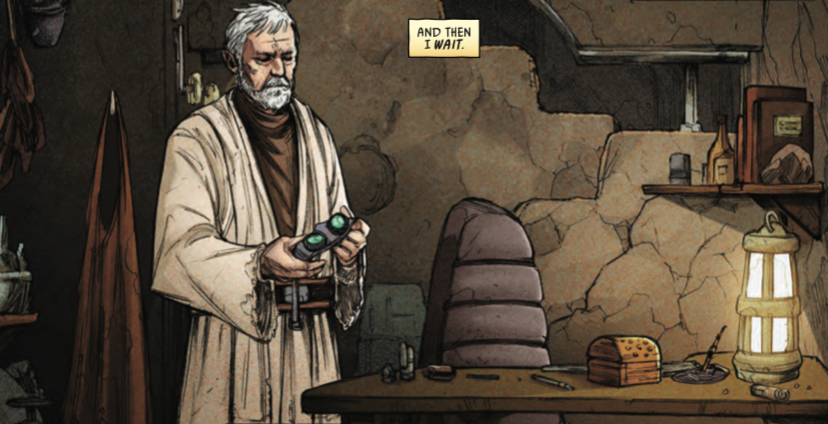 The first chapter of Obi-Wan Kenobi’s memoir is finished. As he waits out one of the worst storms on Tatooine record, he will undoubably have more stories to write down as he takes a  virtual speeder tour down memory lane. His childhood story is told. What adventures will behold teenage Obi-Wan?