Star Wars Obi-Wan #2: A Shadow Falls on the Padawan 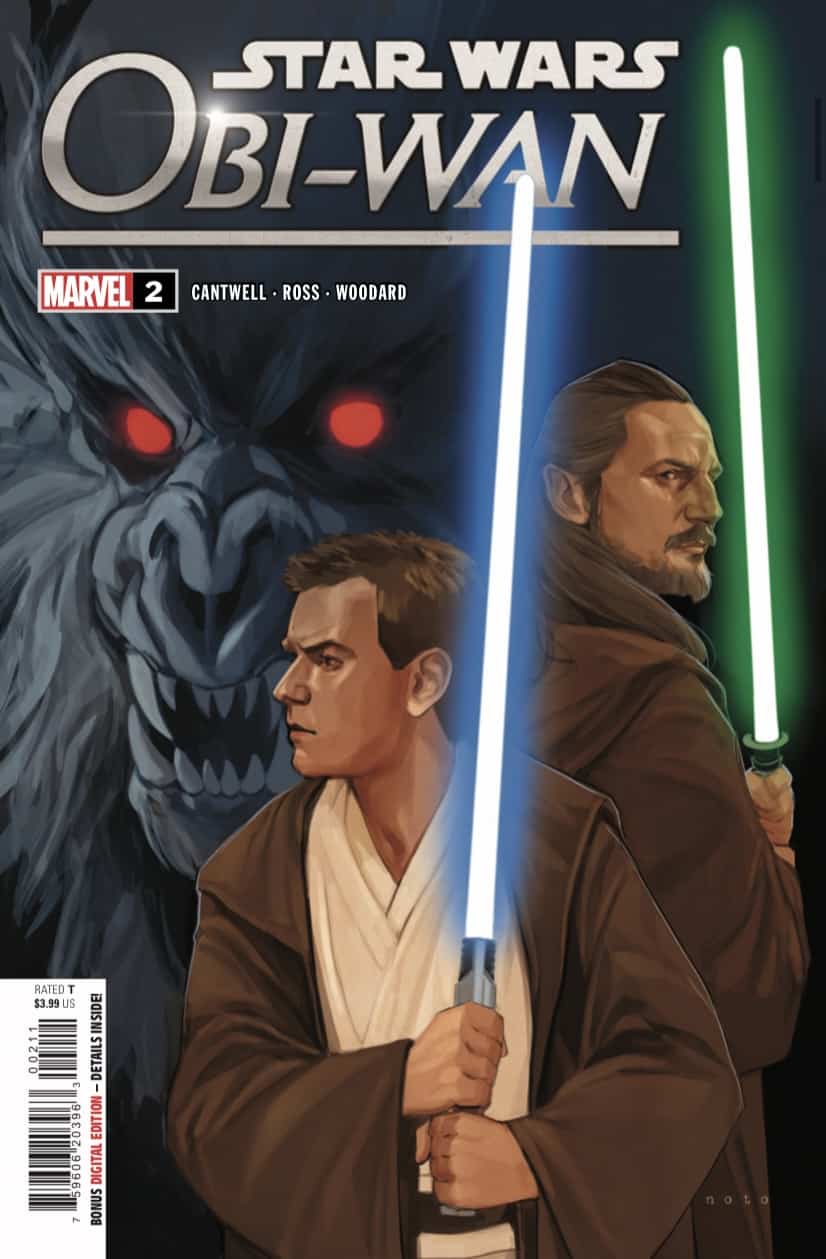 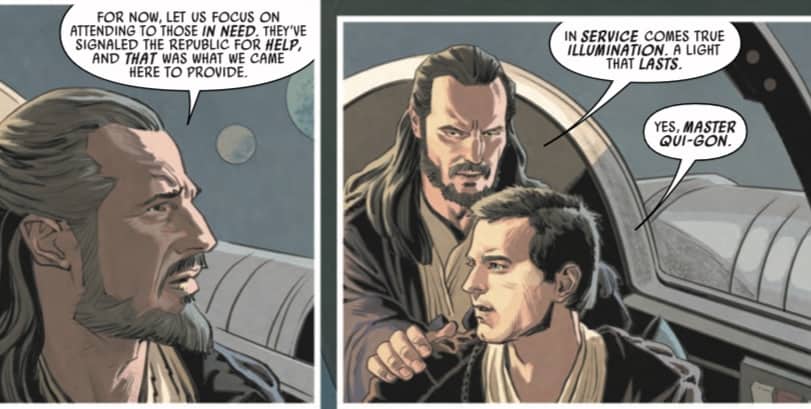 As a Tatooine sandstorm blankets the desert, heading for Ben Kenobi’s hut, the old hermit writes in his journal about important moments in his life. With just a lantern, paper, and ink he recounts a lifetime of experience in learning the ways of The Force.

This series is more like a novel than any other “Star Wars” series. It is mostly told through Kenobi’s narration, which is interspersed with dialoged. This issue builds upon what the first issue established. Each issue is a stand alone adventure with the common thread of old Ben writing in his journal as the narrative frame. By doing this Kenobi paints a picture of his mindset at the time and also what lessons he learned and what philosophies he based around those events in the present. This series is called “Obi-Wan” so it should be all about him, each version past and present, and his inner thoughts. This is accomplished remarkably well. Any other character in this series is secondary to Kenobi, because it is told through not only from his perspective but from multiple perspectives he had throughout time as different versions of himself. This issue really emphasizes that because it is about Obi-Wan as a Padawan, similar in age and look to the version fans got in The Phantom Menace. Any fan will tell you that teenage Obi-Wan is a very different Jedi than the one that fought the Clone Wars or infiltrated the Death Star. This chapter is a balancing act by telling a story about an eager but naïve learner as told through his older wizened self. 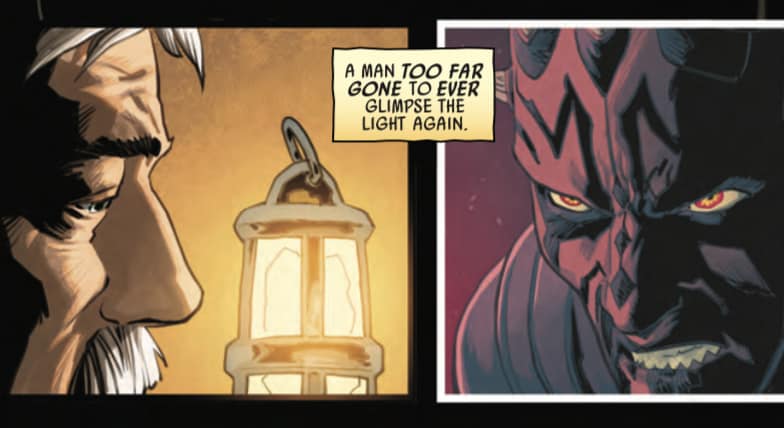 This issue also continues the trend of making connection to live action and animated Star Warsmaterial involving Obi-Wan. This particular issue draws from The Phantom Menace, A New Hope, Rebels, and Kenobi. This chapter represents different versions of Kenobi as he was seen in the first films of the prequel and original trilogies. That spans about thirty five years for the character. This issue depicts a moment from Rebels outright. Kenobi is only seen in a handful of episodes yet his most important moment is recaptured here, only now telling it from his point of view specifically. To add to the excitement fans had for theKenobi show, Obi-Wan and Qui-Gon are shown with the same macrobinoculars that Ben used on the live-action show. On top of all the references, this story itself is very unique. There are not that many tales about Qui-Gon Jin and his Padawan. This issue certainly scratches the itch to see them on an adventure together. The story plays out just like the almost Batman and Robin-like way they were depicted in The Phantom Menace, with Qui-Gon guiding Obi-Wan to the answers, but allowing him to come to it on his own. It shows the teacher and student relationship very well, and that relationship between these characters is not explored enough. 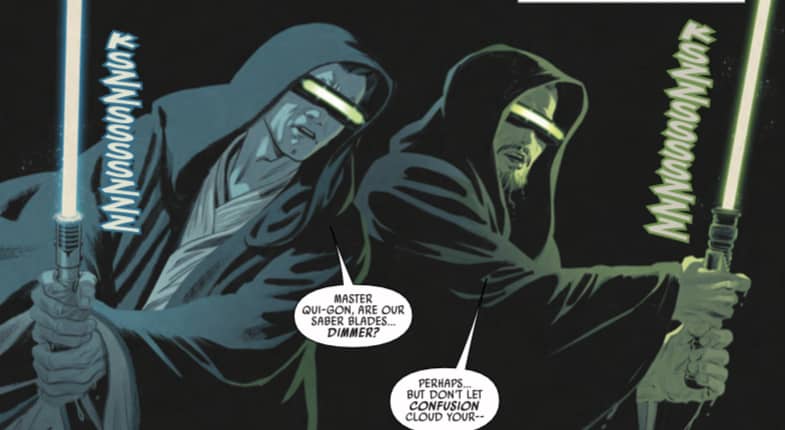 This issue has some very unique art and color in it. The nature of the story and the story within are influenced by two different things that cause the same visual effect. For old Obi-Wan, the images are getting darker and colors are getting harder to see because the sandstorm is fast approaching. In the story he is retelling, there is a disturbance on the planet causing it to be darker than normal as well. This is represented by art that is basically just shadows with hints of light and outline here and there. It requites a very interesting palette which gives a very neat effect. The visual characterization of Old Kenobi, teen Kenobi, and Qui-Gon is very good as well. They are recognizable even in the dark. The backgrounds of the planet are just as gloomy and beautiful as the shadowy action. This series has a deepness to it on all levels. Only two issues in, and it has really made an impression. 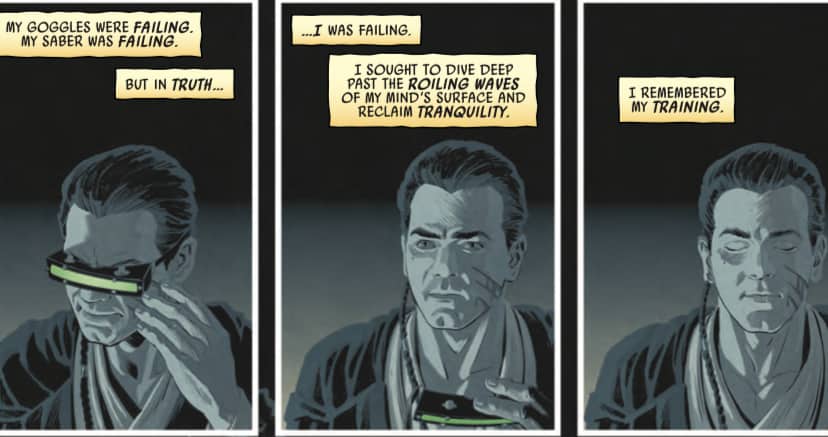 Seeing a youngling Obi-Wan issue followed buy a Padawn Obi-Wan one can only mean Jedi Obi-Wan must be up next. Kenobi is sure to reflect on his time as a noble protector in a galaxy on the brink of war.