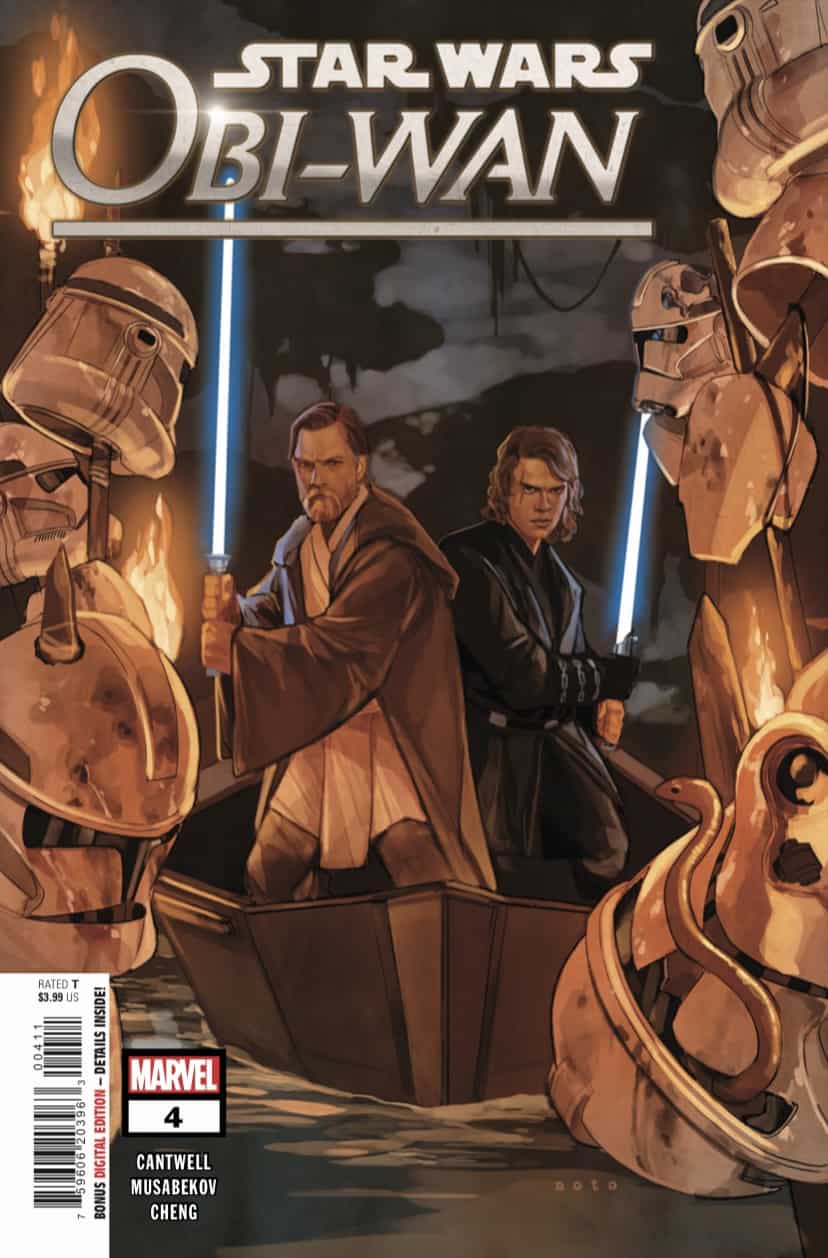 As he lays low Old Ben Kenobi waits for a horrible storm to pass over. To pass the time he writes down memories of events that helped shape the old hermit. He has told tales of his childhood and onward. While the storm is in full effect, he thinks back to a time during The Clone Wars when he and Anakin had to complete a dangerous secret mission off the grid.

There is no getting arounds the fact that this issue is a complete and total reference to the film Apocalypse Now. This issue is extremely on the nose about it. Kenobi and Skywalker are taken out of duty to go to a jungle world to bring back, or more likely assassinate, a commander that has gone rouge. It is very clearly the same story. That plot is sort of a modern myth that gets adapted all the time in many shows, books, comics, and films. Even Apocalypse Now itself is and adaptation of the novel Heart of Darkness. This is not unlike the film Seven Samurai, which has had its plot reused in The Magnificent Seven, and A Bug’s Life. Even Star Wars had done various adaptation of that film, which in itself is a deeper reference as the plot ofA New Hope is loosely based on another Akira Kurosawa film, The Hidden Fortress.” The Clone Wars cartoon has done a version of Seven Samuraii as well as their own version of Godzilla, not at all trying to hide it by naming their giant monster the Zillo Beast. Just as those tales just naturally fitting in this universe, so does Apocalypse Now. In fact, its not even the first time the galaxy far, far away has done it. Way back in 2003, Del Rey brought out the novel, “Shatterpoint,” which was about Mace Windu returning to the Jungle planet he originally came from to hunt down his former Padawan who has gone rogue and started a cult. Some could call the adaptation of this tale in this issue a cop out, but how it lends itself to this series is so well done that it is more than forgivable.

This story was perfect thing to add as a memory in this series. It does not step on the toes of the animated series, even though it plays out in that exact era. It merely references the show and even features Admiral Yularen, a character from not only Clone Wars but A New Hope as well. However the issue does not have the same pace or story structure of a typical episode. The story is told through Obi-Wan’s recollection, so instead of being a typical smash-em-up adventure, it focuses on how Kenobi felt at that time and how he feels about it during the storm. He is focused on Anakin, whom Obi-Wan feels responsible for. The over all story is about the rogue commander snapping under the pressures of war, But Kenobi if focused on how the pressures of war affected Anakin throughout, as he has now become an instrument of Republic war himself. Since this series began, the Kenobi show has played out, and although it takes place many years before this series, the events of that show leave a resonance on this issue. Kenobi felt a responsibility to Anakin at the time of this adventure, but Old Ben is remembering it through the filter of knowing what Anakin ultimately became in Darth Vader. 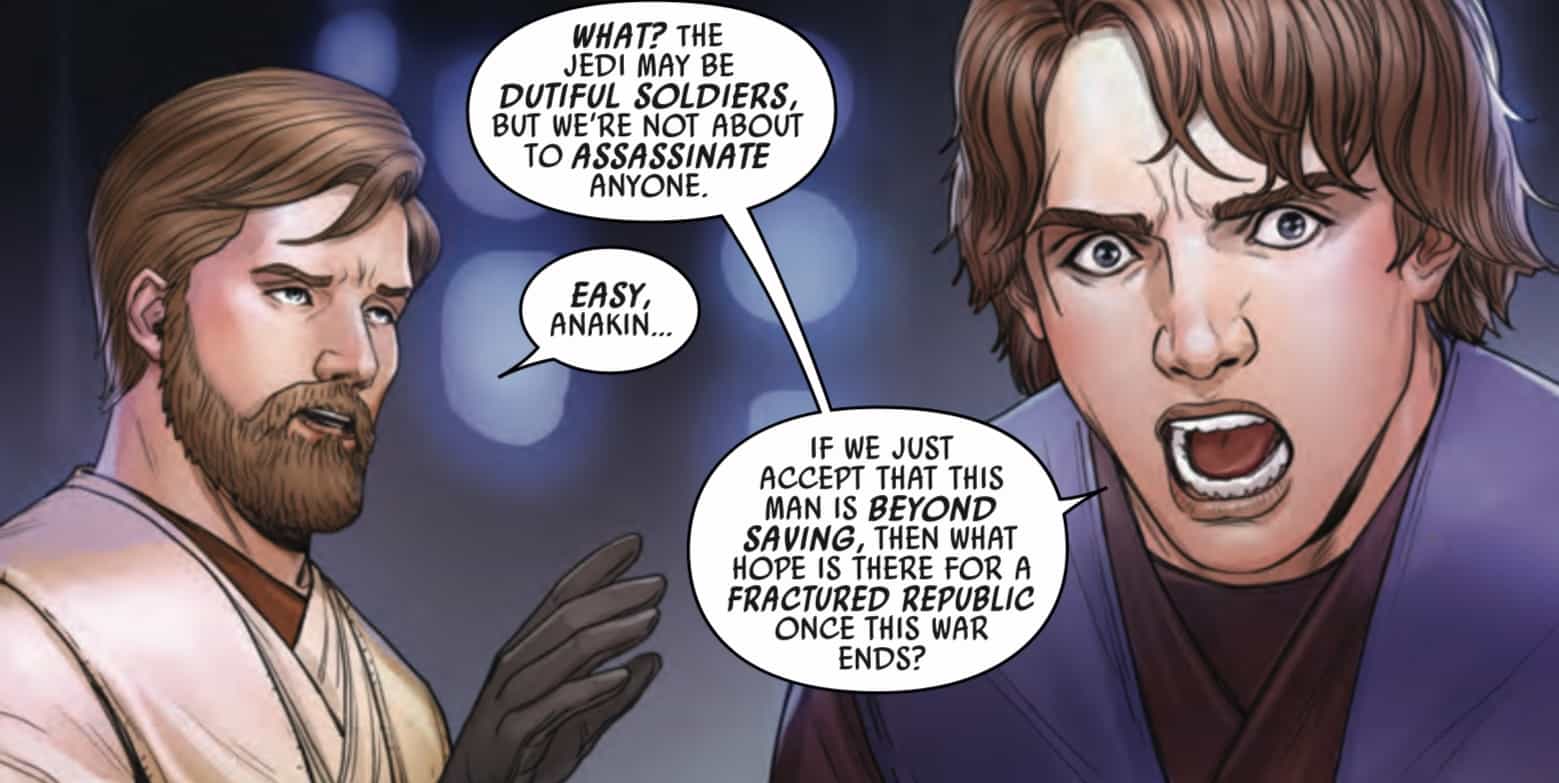 Each element in this issue is very well crafted. The story and its interpretation of a classic tale to Star Wars adds much to the greater saga. It forces readers to see Kenobi as he was and as he is and the subtle differences between them. On top of that, the issue also features some of the best art of the series. Madibek Musabekov was brought on to do he art and its is quite impressive. It manages to capture some of the looks of the Clone Wars series and combine them with cover art from recent Star Wars novels like “Brotherhood” and “Stories of Jedi and Sith.” There is a lot of detail and deep colors that are coupled with fantastic lighting and ink shading, which sells a dark jungle or the inside of a Star Cruiser well. Facial expressions are also very well done, and a lot of emotion is able to come from it at jut the right times in the tale. Beside the great art on the inside, The cover by Phil Noto is particularly compelling. This series was already pretty impressive, but this issue really shines.

The storm continues to beat down on Old Ben’s small hut. As the hermit feels the physical effects from the pummeling sand outside, he digs deeper and deeper into his own memory while trapped in his own home.