Star Wars – The High Republic #14: A Station on the Brink 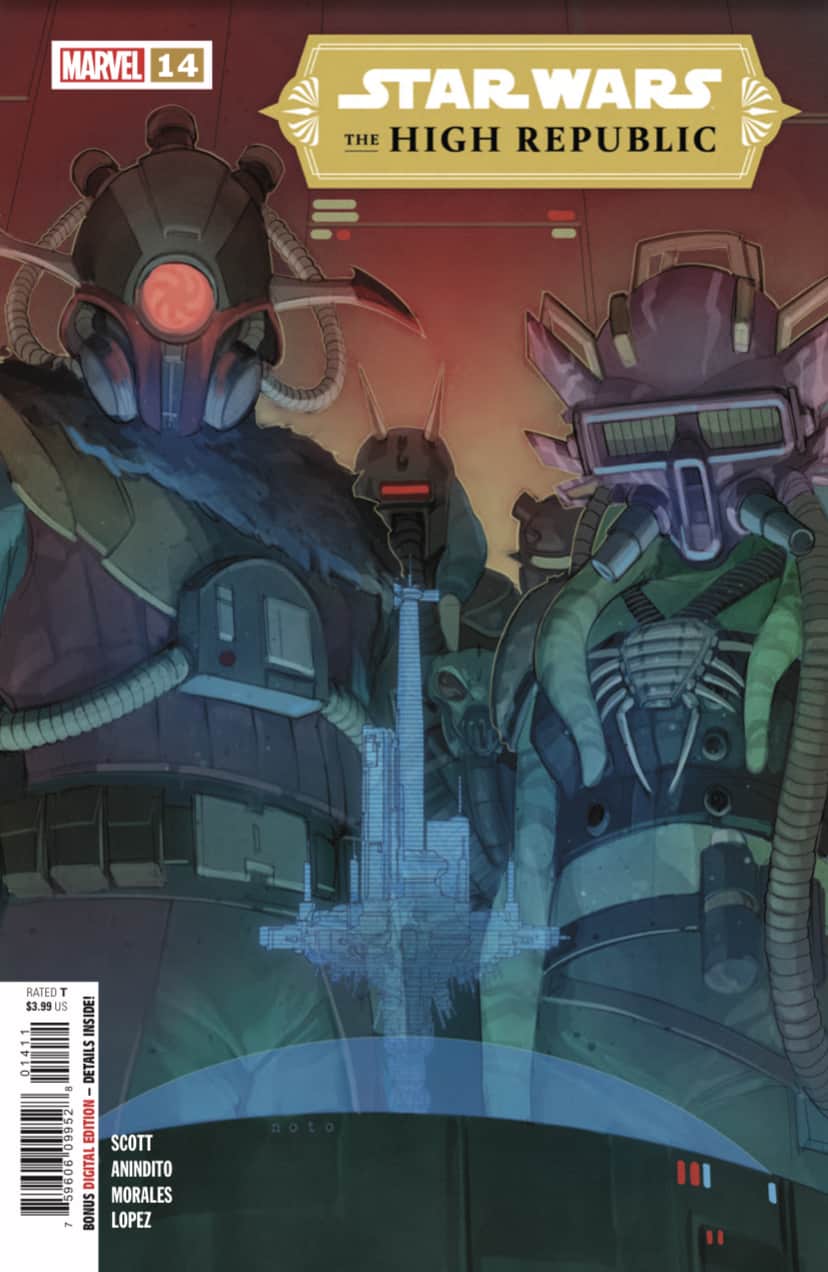 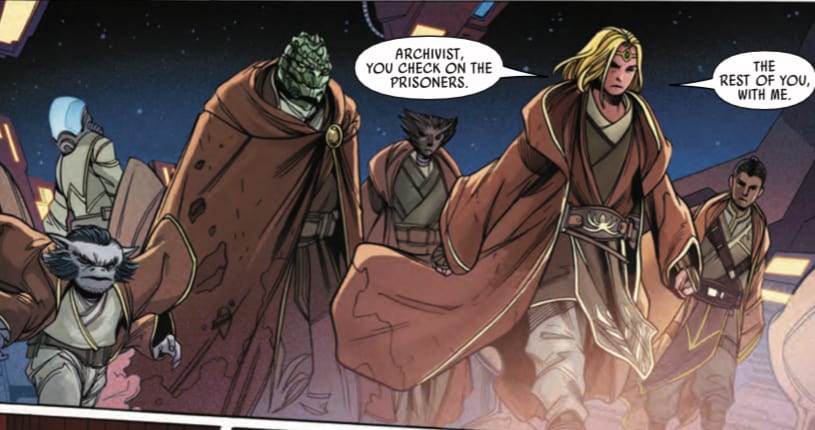 Avar Kriss believes she has captured the Nihil leader in Issue #14. Unfortunately the costly war with the Nihil has weakened her spirit and she may not be able to stay her blade. Once down the dark path, forever will it dominate her destiny.

“The High Republic” saga continues in it flagship comic series to remain one of the most important pieces of the overall story. In the previous chapter, the Jedi of Starlight Beacon had tracked the Nihil to their home base and quickly dominated the marauders on their own turf. The only problem is how close Avar Kriss comes to crossing the line into The Dark. This issue picks up right almost where the last one ended, right before Avar is about to strike down the one she believes is the key to saving the Galaxy. Avar has ignore the council, abandoned he post, and acted out of revenge. She has pulled every trick Jedi are never supposed to pull, and in the end finds herself and her squad victorious. As is a common theme in this series, after a great victory by Avar and her band of Jedi comes a crushing blow. This time it isn’t like the Nihil attacking a galactic fair but a direct attack on the newest and greatest symbol of the Jedi Knights, Starlight Beacon itself. This is Avar and her Jedi’s home base. Now things are really about to get personal. 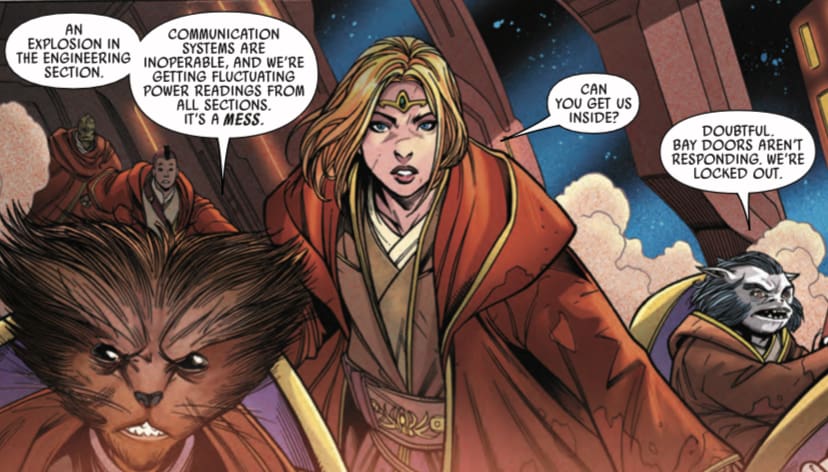 This particular issue plays with a lot of reflections, both literal and metaphorical. First off it mirrors the “High Republic” adult novel “The Fallen Star” which was released a little less than a month prior to this series own release by revolving around the same event. Because the comic series and various book series all take place simultaneously, major events and locations often act as a lynchpin to all stories released at the same time. This series and the current novels all deal with separate groups of characters during the attack on Starlight Beacon. This issue even has the same bit of dialogue between Avar and Stellan Gios that is directly from “The Fallen Star.” In this way, this chapter in particular furthers and deepens not only its own plot, but the plot of the entire “High Republic” saga. On top of that, there are times when the events seem to mirror the Star Wars films. Avar disarms her opponent and must struggle to hold back, just as Luke Skywalker did in Return of the Jedi. Sskeer and Keeve Trennis share a moment of a master and former apprentice taking Jedi wisdom like Ben Kenobi and Luke Skywalker or Qui-Gon Gin and Obi-wan did. Avar must cut a hole through a looked door like so many Jedi have had to do in countless stories. One last little bit of psychical mirroring occurs as well. Although not necessarily intended, the image of masker Sskeer reflected in Master Orbalin’s helmet hammers the point home. 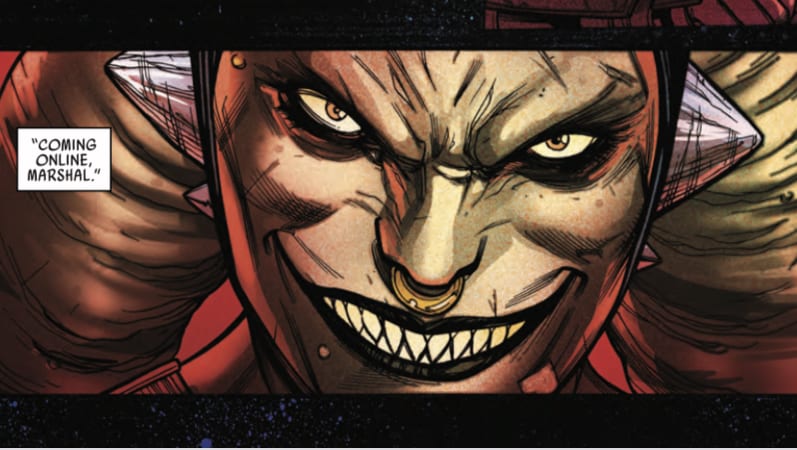 The art in this issue almost doesn’t stand out at all. It is not that it is poor quality, far from it. It’s just that the art in the entire series has been so fantastic that it is hard for any one issue to stand out. This issue continues that, but does layer on a very important element. There is a very great usage of facial expressions that define this chapter. It is clear on Avar’s face when she is enraged, tired, worried, thankful, or exhausted. When she briefly speaks with Stellan Gios, it is clear that they are both uncharacteristically angry with one another. Even among the Nihil, the cold plotting Lourna Dee expressed disgust and malevolence at times. Keeve is trying to understand through a furrowed brow, and Master Sskeer almost seems calm. When the secret weapon of the Nihil is used, the incredible strain on the Jedi is abundantly apparent on their faces. The coloring and ink work are also quite impressive, but not something that sticks out as much. The common use of green in the issue has been used throughout this story arc, and this issue keeps that up. Cavan Scott and his crew working on this series seem to run like a finely tuned machine to repeatedly bring out one great issue after another. 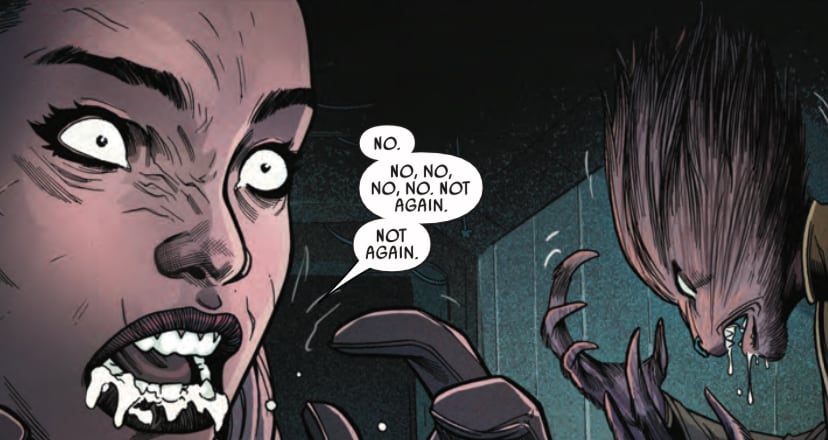 As Starlight Beacon threatens to tear apart and fall into the closest planet, beings aboard start to panic. Separated from the other Jedi, Avar and her squad must confront new dangers on top of the ones that they are currently in. How can they stand against a weapon that can drive them mad?

Star Wars – The High Republic #14: A Station on the Brink