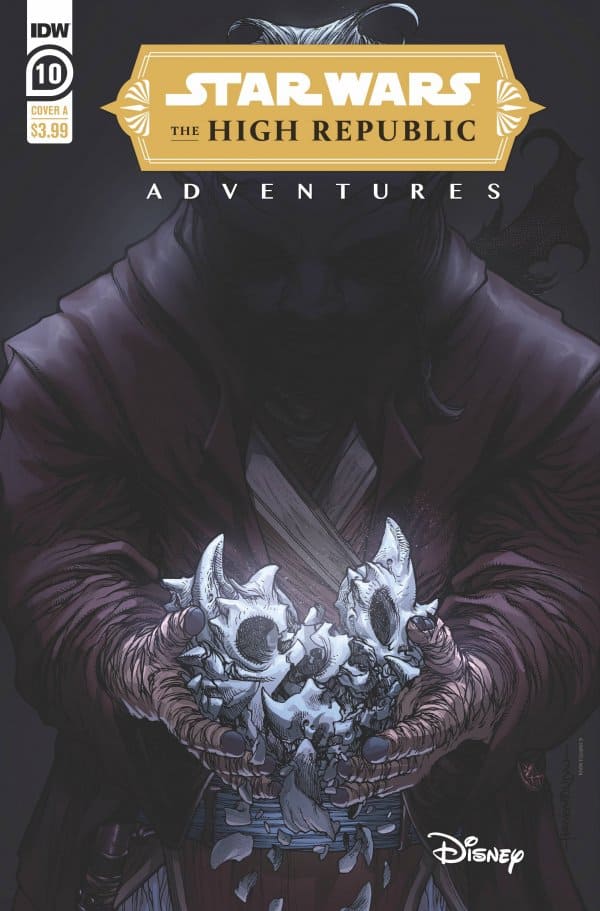 Chaos at Takodana! After the Nihil have attacked the Jedi temple, the Padawans must face them once again. Overwhelmed and outnumbered, the heroes are backed into a corner until an unlikely Padawan among them unmasks their full potential and saves the day!

Star Wars The High Republic Adventures #10 opens up with an adorable flash back of an even younger Qort being trained by his master, then later handed over to Jedi Master Yoda. As cute as the flashback was, I did feel the three pages it took was a missed opportunity to give more backstory of Qort. We did learn Qort has had an attachment to his mask from a young age, but that was it. It was a bummer to not learn more of why the mask meant so much to this young padawan.

As for the rest of the issue, we get a fun battle on Takodana. It’s very interesting to see a battle that is reminiscent of the battle that happens on this planet in “Star Wars Episode VII: The Force Awakens”. It gives the Jedi Temple on Takodana more history and backstory of what it has stood through.

The story itself felt a bit short. This issue read very quickly, even for a comic meant for a younger audience. The action was fun, but the battle was simple and felt a little dull. As fun as it was seeing Qort getting the spotlight, it would have been nice to see a little more involvement from the other Jedi that have been in this story arc.

Aside from my mixed feelings of this comic’s issue, the art was fantastic. Toni Bruno does a great job illustrating facial expressions and body gestures that allow the art to tell the story more than just the dialogue. Bruno’s style is cartoony enough to appeal to young readers while still remaining clear in showing off an epic battle. Bruno’s style also depicts Takodana beautifully. The scenery felt woodsy, yet bright, just like it did in the movie. Combined with Rebecca Nalty’s colors, every panel looked colorful and vivid. I love how Bruno didn’t take shortcuts drawing the rubble by just filling it with textures like some artists do. It felt like every stone was on the ground without the panels feeling too overdrawn.

Overall this issue was fun but missed some opportunities to really develop on Qort. I also feel that the pacing felt rushed and the story itself didn’t have much development. So far this has been a good series but this may have been its weakest issue.