Star Wars – The High Republic: Eye of the Storm #1: Brutality, Thy Name Is Ro 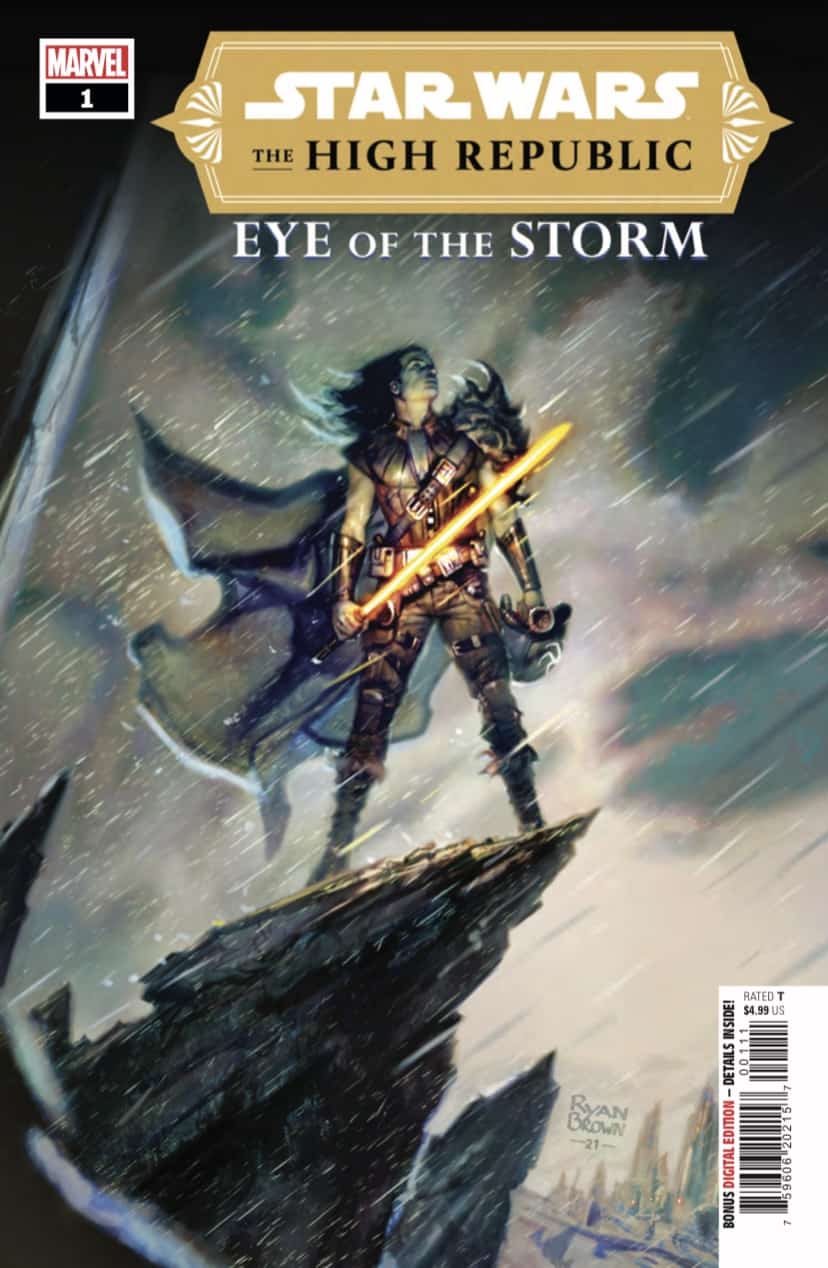 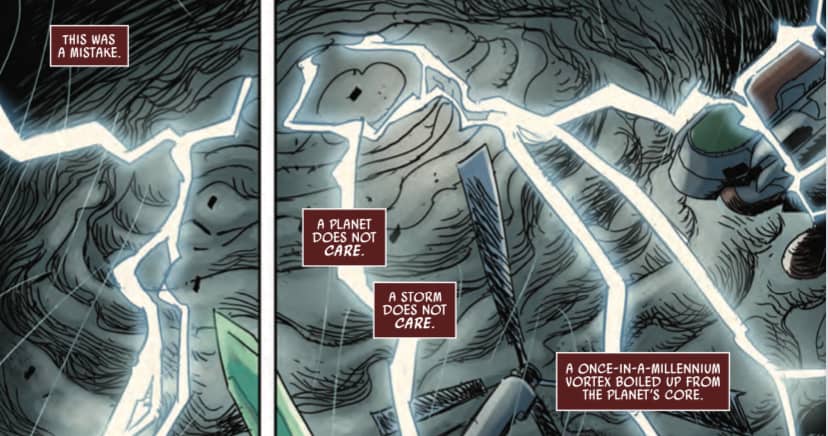 It is a time of peace and prosperity in the galaxy during the era of the High Republic. Jedi are at the height of their power and it would seem there is no storm they cannot weather. But on the horizon clouds are forming that will bring destruction and pain, and the center of that tempest is The Eye, Marchion Ro.

The multi-platform series of “High Republic” has just celebrated its first anniversary, bringing with it tons of novels, comic, manga, and even children’s books. It has been a banner year for Star Wars literature, and it has mostly been due to the increasing popularity of the “High Republic.” The team of writers that bring fans this epic endeavor have carefully crafted a new world in which to play in. Having New Canon stories that take place far removed from the era of Star Wars films allows them the freedom to carve out a new part of star Wars history. A staggering amount of new Jedi are introduced in the first chapter of High Republic, “The Light of the Jedi” as are the new villains known as the Nihil. At the center of the Nihil is their leader, Marchion Ro. As far as Star Wars villains goes Ro makes a lasting impression right off the bat, conjuring recollections of other famous Star Wars villains such as Grand admiral Thrawn, Enfys Nest, and even Darth Vader himself. At time he is cool and collected. At other times he is brutal and seemingly unhinged. However he is always calculating and planning, the hallmark of any great Star Wars bad guy. 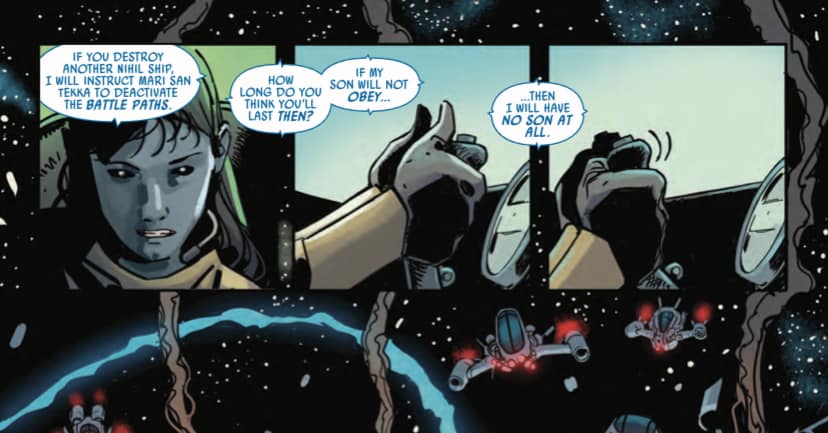 This first issue reads like a play. It is titled “Act I,” and the three sections of this longer than normal comic book is sorted out into three “scenes” as if it were a script. Scene I explains the backstory of Ro’s people. Scene II involved Ro’s father’s rise to power, and scene III covers Marchion’s rise. The last scene crosses over into events of “The Light of the Jedi,” making this issue a very great companion piece to that first novel. This is unlike other “High Republic” stories. Everything that has been brought out so far, has been in the overall saga’s chronological timeline. Each book released follows the previous ones, with the various comic series running parallel to them as they are released. This issue runs way back to well before the “High Republic” series even starts and well before Marchion Ro even exists. This issues weaves a tapestry of events that ultimately hone Ro into the brutal warlord he is. It cleverly exposes the meanings of the various ranks of the Nihil by explaining that Ro’s ancestors came from a stormy planet. The Nihil use ranks based on weather terms like tempest runner, strikes, clouds, and storms, the highest rank being the Eye of the Storm. The issue goes on the use those images throughout it wherever it can. Lightning, steam, clouds, thunderous explosions, and even a literal eye of a storm are implemented to drive that message home in a brilliant way. 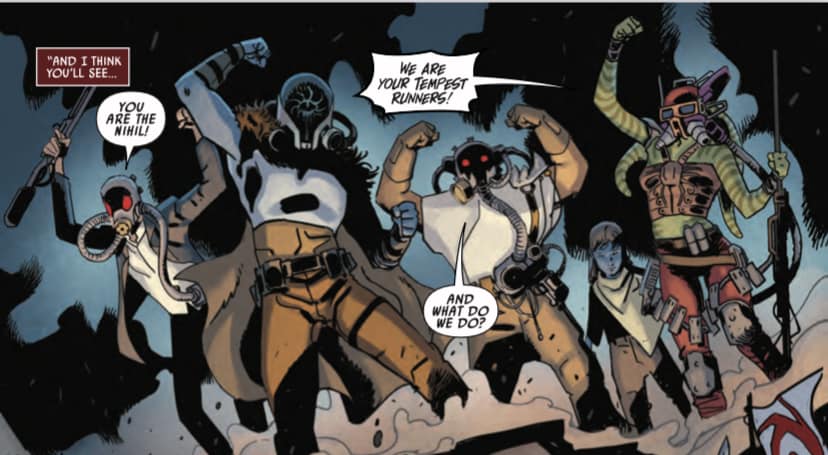 The only downfall of the issue is the fact that there is so much going on in every panel that the art suffers for it. Characters, ships, and setting lack the fine detail that Star wars comic books are usually known for, especially in the later Dark Horse Comics days. However this mirrors the beginning of the Dark Horse run in “Dark Empire,” which relied on the story to drive it more than the art. The coloring follows this pattern as well, choosing a simpler palate of just a few colors per panel. However it is at least more colorful than that “Dark Empire” series. The main reason the art and colors do not stand out as much as they do in other Marvel “Star Wars” titles is because they just do not have to. Whenever a previously known character shows up it is very clear who they are by their species and costumes, as they have already been well established in previous “High Republic” comics and books. The real gem in this issue is the cover art by Ryan Brown. Ro appears almost as a hero, looking up into a storm while standing on a rock peak as if he was Beowulf or a Greek hero of legend. To the Star wars fans who just love villains, Ro is very much almost like a hero and absolutely on track top become a fan favorite. 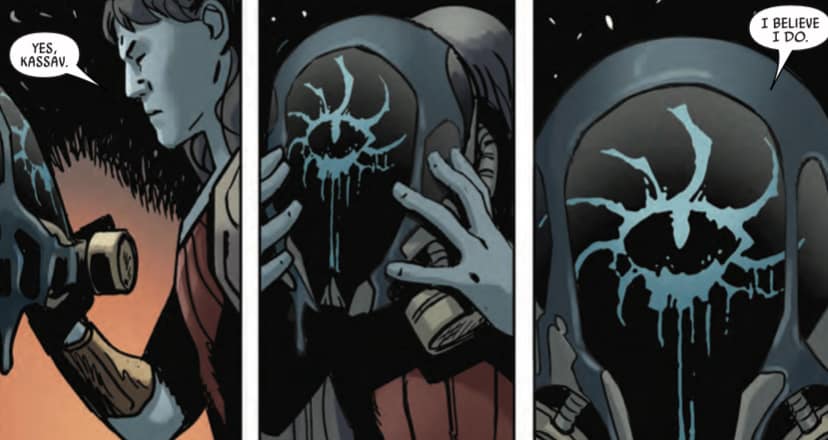 Marchion Ro has seized power of the dreaded Nihil. He now plans to unleash them upon the galaxy. The Jedi and the planets of the Republic wont know what hit them as they get caught in the storm created by the Nihil with Ro in the center.

Star Wars – The High Republic: Eye of the Storm #1: Brutality, Thy Name Is Ro