Star Wars – The High Republic: Trail of Shadows #4: A Tale of Two Chadra-fans

Star Wars – The High Republic: Trail of Shadows #4: Chapter IV: Whatever it Takes 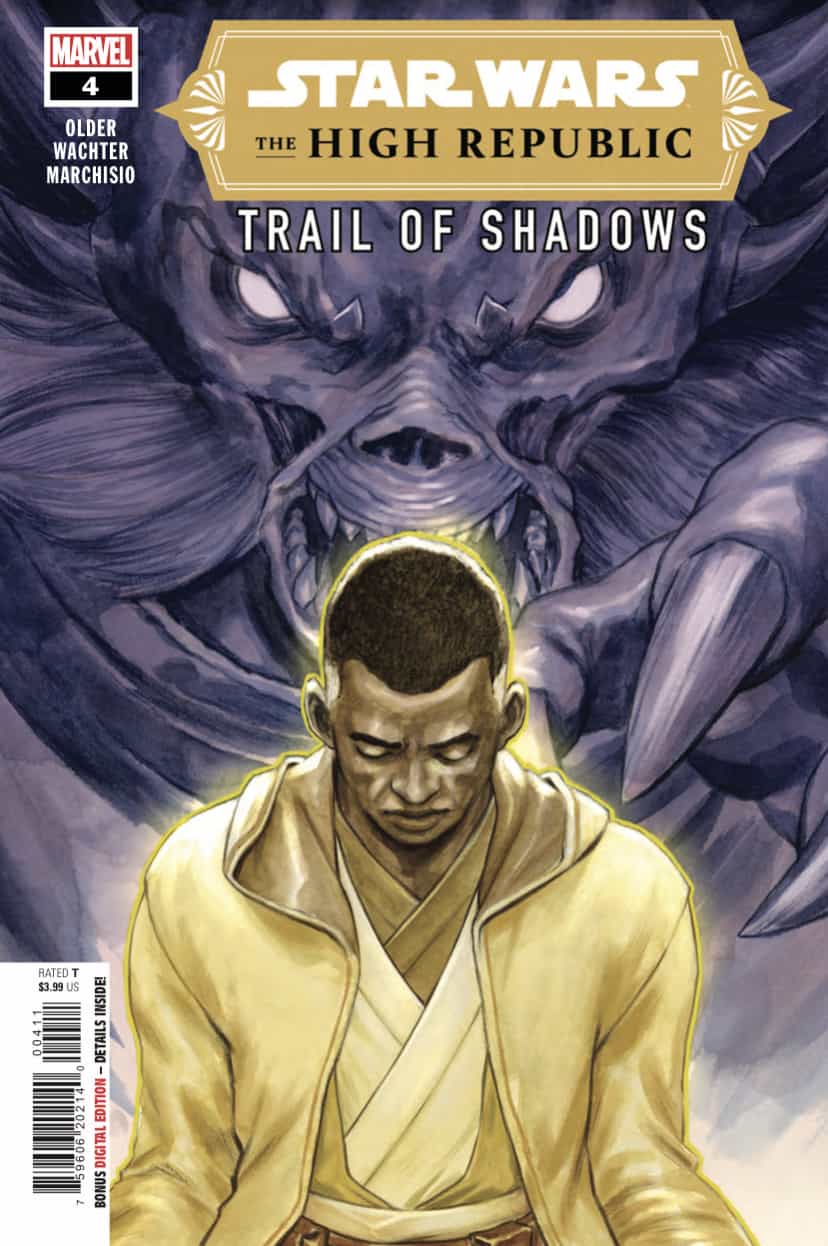 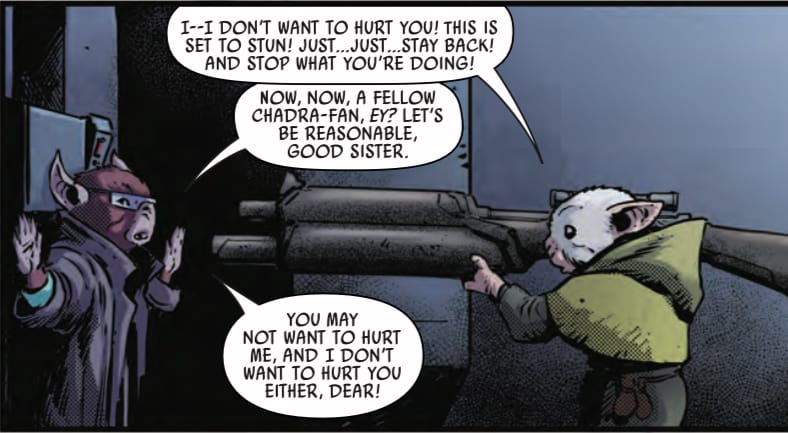 Sian Holt and Emerick Caphtor have set up their network of spies across the galaxy, but all channels have been silent. Meanwhile the disgruntled Doctor Uttersond plots to betray the Nihil, who he has been working for until now. Both of the investigators and Uttersond want to bring down the Nihil, but will they know each others allies of enemies?

This series has done a fantastic job of being fully rooted in the larger “High Republic” series of various comics and novels while remaining a very unique tale. This issue continues and expands on that. The beauty of reading all of the different “High Republic” stories as they are released is that they have mostly been released in chronological order. Books will reference thing happening during comics released at the same time, and vice versa. This chapter works double duty at that. Emerick Caphtor has gained a bit of mystique by being reference in the books. In the novel, “The Fallen Star,” released after this series began but before this issue came out, Emerick is mentioned as a master investigating Jedi. The character was established just prior to the release of the novel, so anyone keeping current to “High Republic” stories would be able to enjoy the Easter egg of reading his name in these momentary references. On the other hand, this issue is able to return the favor in kind by directly referencing events from “The Fallen Star.” This kind of cross referencing is something that the entire series is doing, making each story being released a real time chapter of a much larger epic story. This element is quite impressive considering that the various writers and publishers from multiple companies had to all come together to plan out this multi-year even many  months in advance. 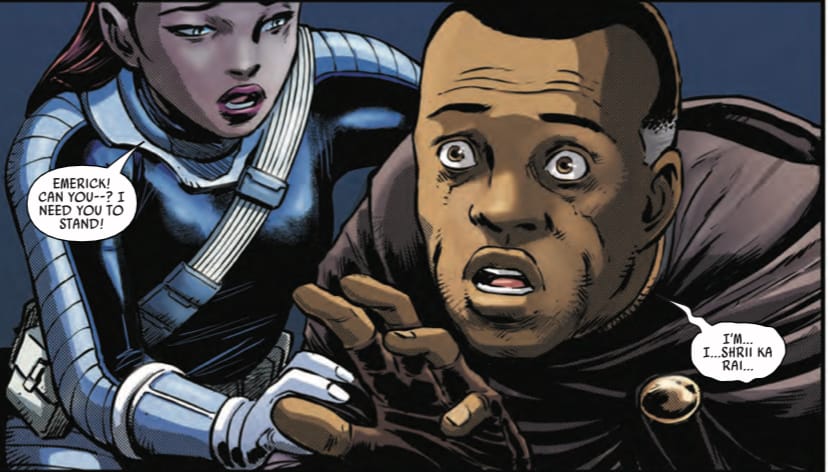 As much as this series does seem to focus on Emerick Caphtor, this issue does not in a way. At the beginning he is frustrated with the slow speed of his investigation. Later he is called to action, but after a short time he is essentially rendered powerless. This gives three other characters a bit more time to shine. Two of them are members of an unusual but ever-present alien species that goes all the way back to the original Star Wars film. Fans of the bat-like Chadra-fans will be pleased to not only have the two present as predominant character, but even more of them are shown in this chapter as well. The first of the two is Doctor Uttersond of the Nihil. This character has been present in “High Republic” stories since the beginning. He has appeared in multiple books as well as IDW’s “Star Wars: Hight Republic Adventures” comic series. However it was not until this particular series where he has decided to betray the Nihil. The second Chadra-fan is Beesar, a new character. Beesar is an older Chadra-Fan who has become a spy for the Jedi. She is driven to avenge a loved one killed by the Nihil. She is a brave hero, although she would be the last to know it. The third character to get a bit of spotlight in this issue is Sian Holt. She has remained the co-star of this series, but in this issue she gets a change to carry the story. She starts off consoling Caphtor and offering advice, which is followed by her daring participation in a space battle. Finally after Chaptor is incapacitated, she has no problems taking charge and even wielding Caphtor’s saber in the process. She has hardly been useless in this series already, but this chapter shows just how capable she really is very well. 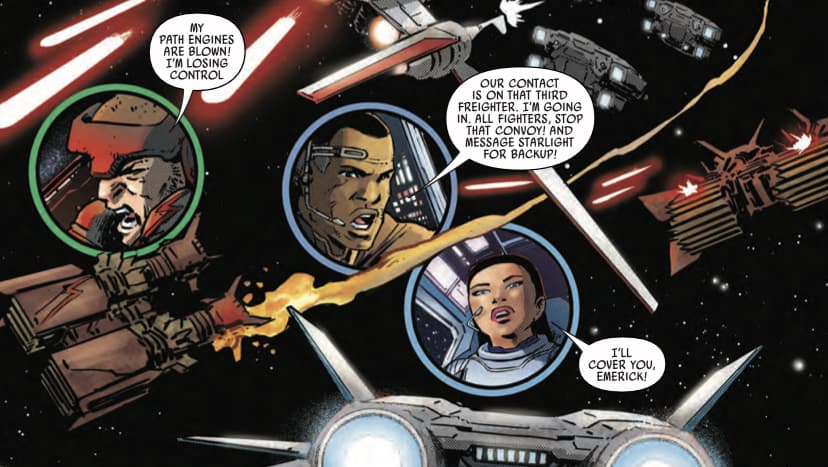 This issue continues to offer amazing highly detailed art. This is complimented by the exquisite coloring and shading that the entire series has favored. The color palette favors bold and interesting choices, reminiscent of many great DC graphic novels of the 80’s like “Watchmen” or “The Dark Night Returns.” The shading remains in the same dot pattern used in previous issues, which gives the series a further classic comic book feel. One of the greatest accomplishments in this issue specifically is a fantastic space battle. Its not at all easy to write space battle, or even depict them in comic quite the way they look in movies. It’s hard to get the right pace while also showing the excitement of guns firing and explosion. This issue does a really good job with it. It basically just shows one large two page spread panel with many ships enguaged in star-fighting with small circles of character heads and dialog to tell whats happening. Usually this is done with many panels of character dialog and single ship maneuvers to tell a complicated series of events that takes much more time to read then the events would be folding out. As a result, this one giant two page spread tells the whole battle in one picture and doesn’t miss a beat. This is yet another trick from classic comics like “X-Men,” which had to show many characters all acting as one in sperate engagements. In a lot of ways this series has the most classic feel to it than any other “High Republic” story, and that’s still on top of the spy/detective/pulp noir elements that define it. Daniel Jose Older is certainly a great asset to the overall “High Republic” creative team. 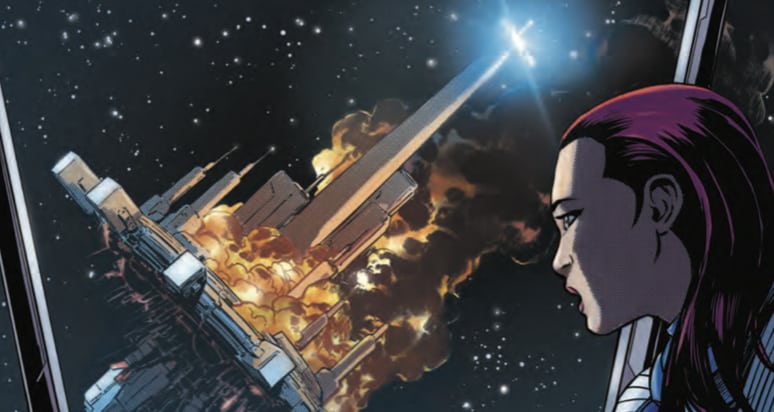 The events of “The Fallen Star” have caught up to this series. Caphtor needs help, but it looks like the assistance required is tied up in a larger conflict. Only one issue left in this series and still a few mysteries to solve too. If the first four issues of this series in any indication on how that last one will be, it should be a doozy.

Star Wars – The High Republic: Trail of Shadows #4: A Tale of Two Chadra-fans