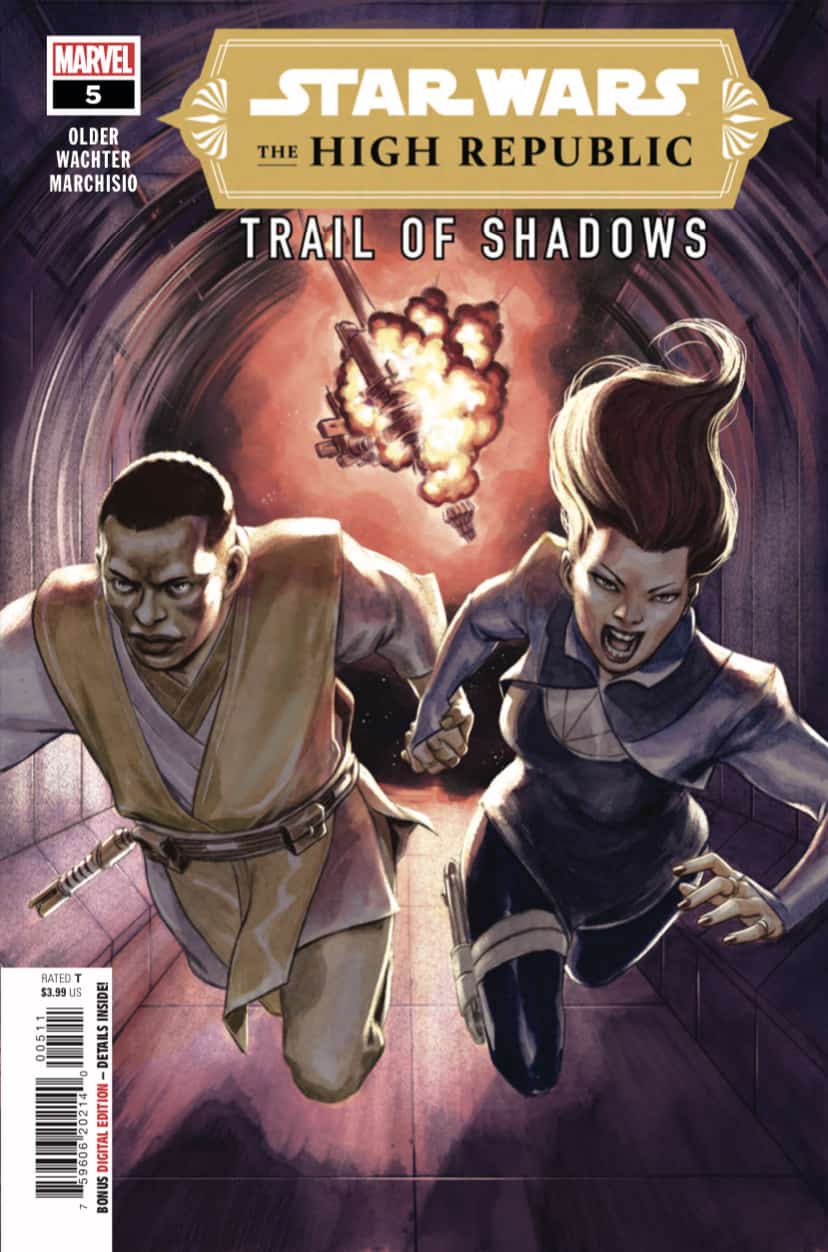 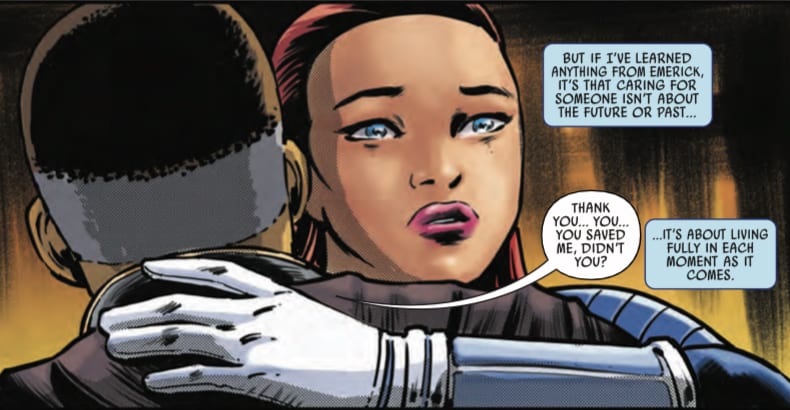 After hitting a dead end in their search to find out what killed the Jedi Loden Greatstorm, Sian Holt and Emerick Caphtor found answers in a former Nihil associate. Their investigation leads them to Starlight Beacon which is undergoing a massive disaster of its own.

“Trail of Shadows” has reached its end in this, the final issue. The entire series has been a standout story among all the other “High Republic” series. It used a film noir classic detective narrative coupled with some classic comic art styles to create a unique piece of the over all “High Republic” saga. As this was a story surrounding an investigation, it certainly ended with some answers but not all of them. This is a smart move. It allows for the rest of the answers to be told in other “High Republic” tales and it leaves an open gate for Sian and Emerick to possibly return in the future. The duo makes for quite a team, not only as investigators but for the possible hinted romance between them. They certainly deserve more stories. 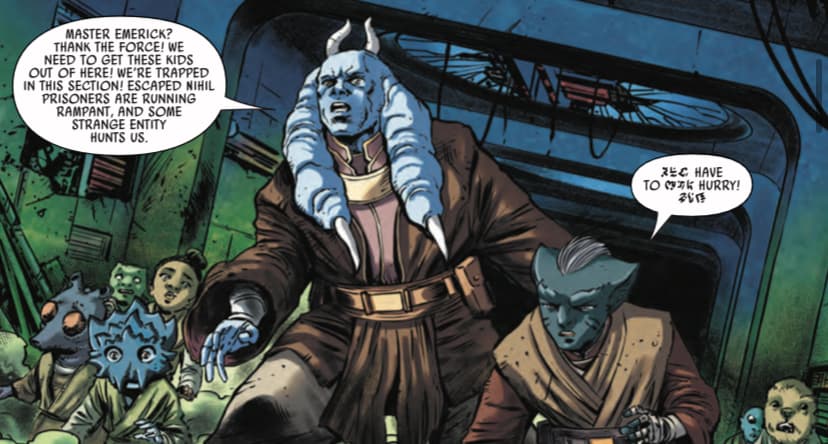 This issue acts as a kind of cross-over issue. Star Wars comics are brought out by both Marvel Comics and IDW Publishing. Marvel has their own running main “The High Republic” series as well as a couple mini-series like this one. IDW also has a main series called “The High Republic Adventures” and a couple min-series of there own too. The storylines are very different but revolve around the same main events just like all “High Republic” stories. Because they all involve different sets of characters, not every character group gets to interact with the others much as they are involved in their own stories. However when common disasters occur, it is not uncommon for those separate groups to interact, bound together by whatever cataclysm is affecting the galaxy. During the assault on Starlight Beacon, Sian and Emerick run into a group from IDW’s main series. This group is lead by Torben “Buckets of Blood” Buck and Qort. Both characters have had well established stories revolve around them in their own right, so this team up is almost like a meeting of the mighty. This adds the further unification of all “High Republic” tales, but it is especially nice to see it happen with the two comic legs of the overall saga. Of course it helps that this series and IDW’s “The High Republic Adventures” were written by the same guy, which only lends to the natural blending of these two groups. 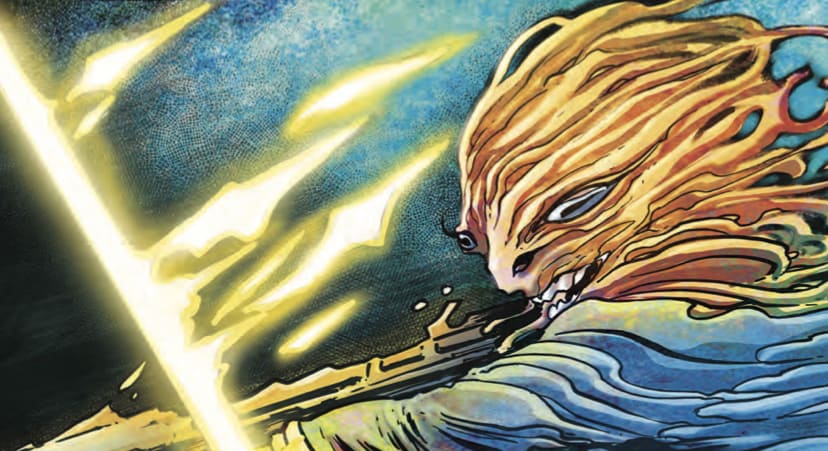 Daniel Jose Older and crew have done a fine job with this book. The art and coloring have been fantastic. Even though it is a side story basically, it still manages to play an important part in the overall saga. The attention to the genres it references like noir and classic graphic novel art is sublime. This issue continues that well, yet it gets to add this entirely new element in this last instalment. There are a few moments where Emerick is experiencing vivid hallucinations. In the issue this is depicted by elaborate pieces of art that very much looks like melting faces in a truly menacing atmosphere. It is such stark contrast to the clean and precise art of the entire series that is has an appropriately jarring effect. This effect has been used by other artists in the main “High Republic” comic series, but in a very different style. This issues version seems to bump up the surreal a few notches to provide something uniquely eerie. 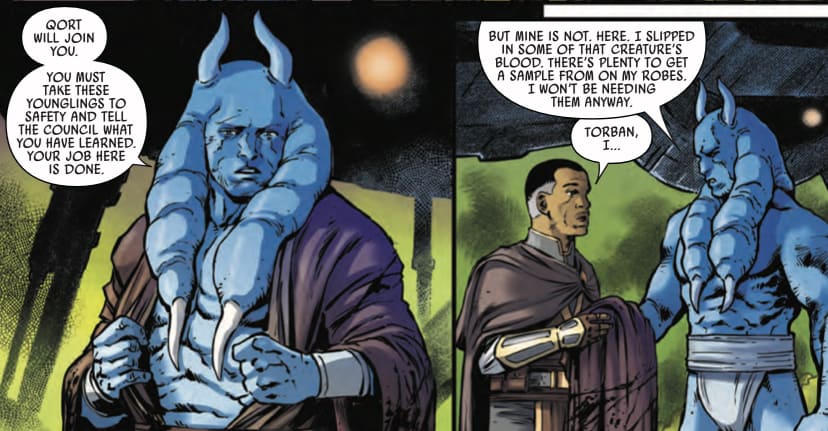 The investigation is over for now. All the information Sian and Emerick have gathered is now up for the Jedi to review. The “High Republic” saga is no where near over though. It seems almost certain that this dynamic detective duo is bound to return eventually to solve another case.