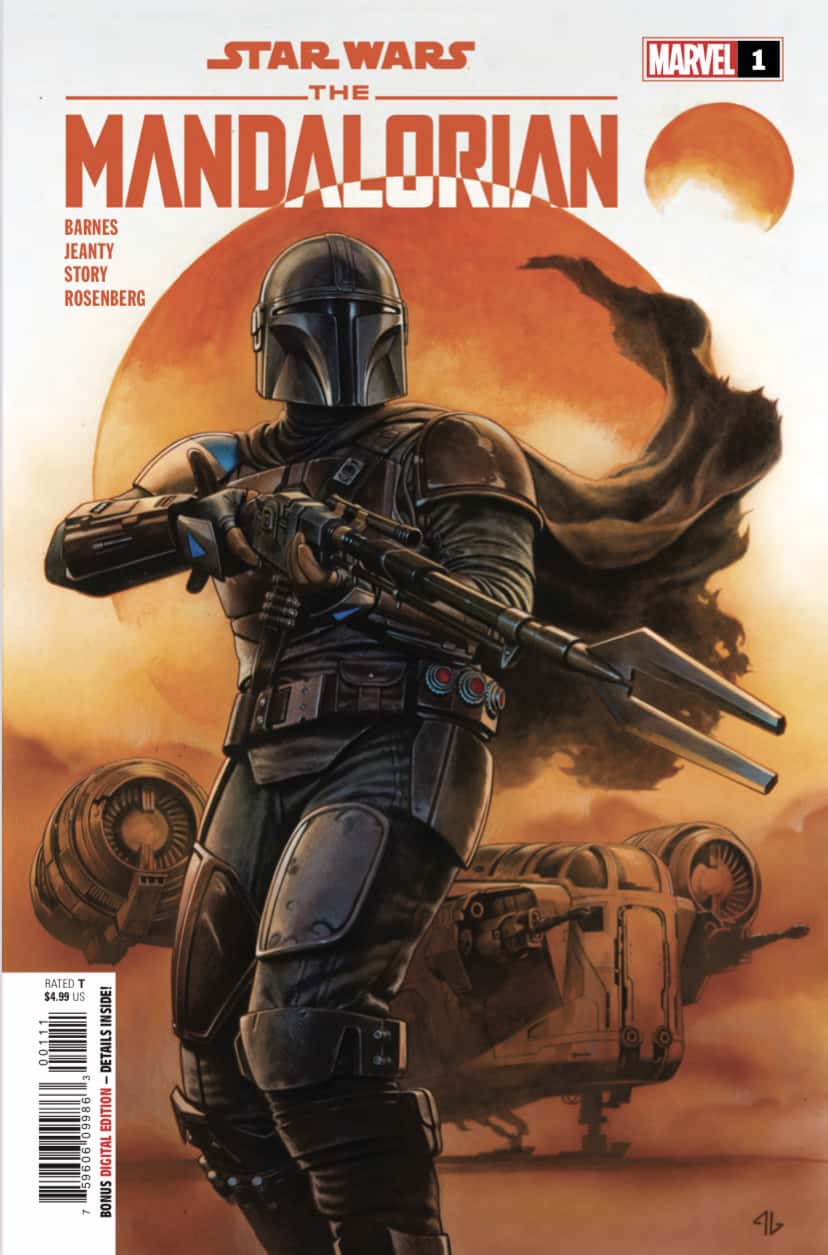 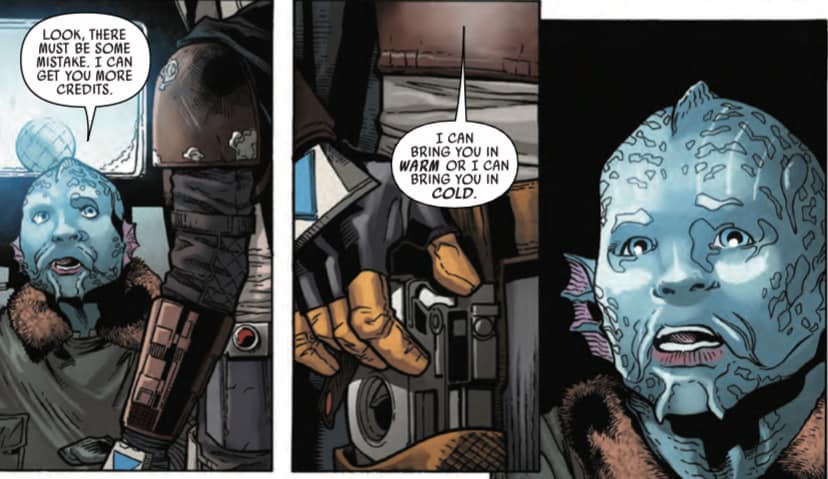 The Empire is all but a memory as the Outer Rim becomes a lawless place where beings live out their lives in fear, constantly fighting to survive. For some, like the Mandalorian, their purpose is to be that constant fight or source of fear for the criminals of worlds relatively unpoliced. Meanwhile his people live underground and try to remain true to their religious warrior ways.

This comic series is, in a word, problematic. New stories about characters from The Mandalorian can’t be told because the writers for the show need the freedom to mold their world their own way. And why try and stop that? The show was a phenomenal success, even overshadowing the final feature film of the Skywalker Saga, The Rise of Skywalker which came out the same month it premiered. The creators of the show have delivered what is mostly considered a very engaging experience. They have every right to be able to control even side stories into what is essentially their territory. There was a “Mandalorian” novel expected out last Fall that was suddenly cancelled as well. This was due to the everchanging nature of writing a show season by season. That novel conflicted with those change, so it had to go. What becomes the result of this is that the show’s story gets adapted and retold over and over again. There are versions of The Mandalorian as told through a junior novel adaptation and even a “Little Golden Book” version. The natural next step is a comic adaptation, which unfortunately adds nothing to the story and coming far too late. 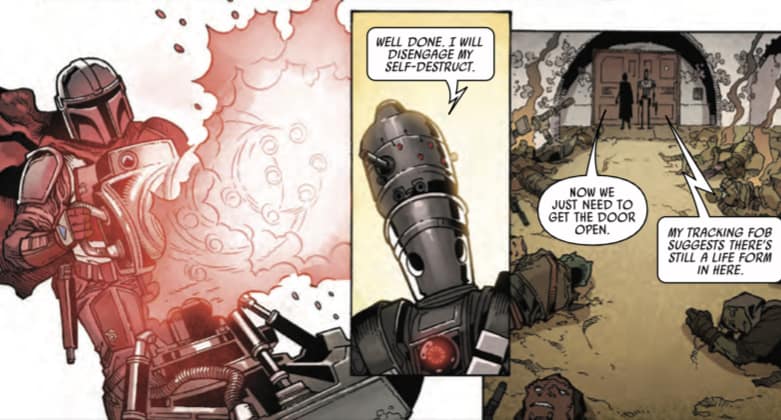 A lot of what does not work with this adaptation has little to do with its writing or art. It is the nature of what is being adapted and how it has to be adapted in a specific way. The first issue stays strictly to the script and does not add a thing. The settings, lines, and characters are incredibly faithful to source material. That causes a problem. Why do fans need this story retold if it doesn’t add anything to it? On top of that, it comes out almost three years after the show began. Many fans are craving stories beyond not only the first season, but the second as well. This almost feels like a step backwards in a way. The things that made the show so great were the music, cinematography, acting, and action choreography. None of that is easily accomplished in a comic books format. The absence of those elements makes this issue almost boring. Even at over 30 pages, more than a regular issue, the story seems rushed too. What was a wonderful and complex ten minute scene with the Armorer in the first episode, it crammed into only a couple of pages. Even the Mandalorian’s flashback to being found as a child himself is told through only a single wordless panel, albeit a big one. A huge detractor in this issue is not being able to hear the dialogue. Readers might have Warner Herzog’s voice in their heads as they read his character, but that’s a pale imitation to hearing him. The same can be said for every character. All in all this issue falls short of being great, although it is certainly hard to call it bad. It just cant live up to its live-action predecessor. 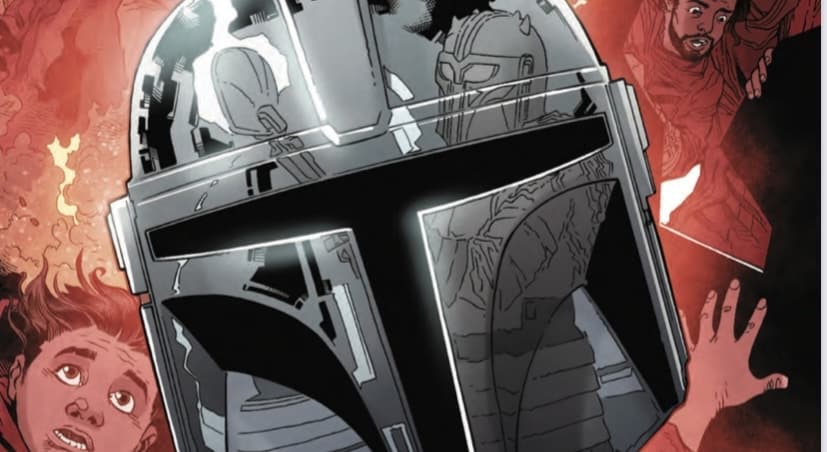 The art is very detailed and captures the show well. The backgrounds and characters are very recognizable, even if the likenesses to the actors who portrayed them is not. One huge plus to this issue is that the character designs are pretty consistent throughout. Having actual footage to go off of helps with this certainly, but every time you see a charter they look exactly the same in previous panels, only from different angles and in different poses. This often gets lost in other “Star Wars” comic series because they don’t always have photographic references. Even the overall color scheme matches the tones of the television series. It is not over the top bright, but neither was the show. Despite the fact that this series wont be furthering the plot beyond the show, it is impossible to deny that it does capture it as well as it can. Unfortunately for this series, there isn’t a lot of extra stuff to throw in. There is very little in deleted scenes or other material to draw from. This is frustrating because Marvel decided to skip doing an adaptation of The Rise of Skywalker, which had loads of deleted scenes from the film and novel versions that could have added to the story. However it is always safer to go with what is the most popular property at the time, and The Mandalorian is unarguably the most popular modern Star Wars property. 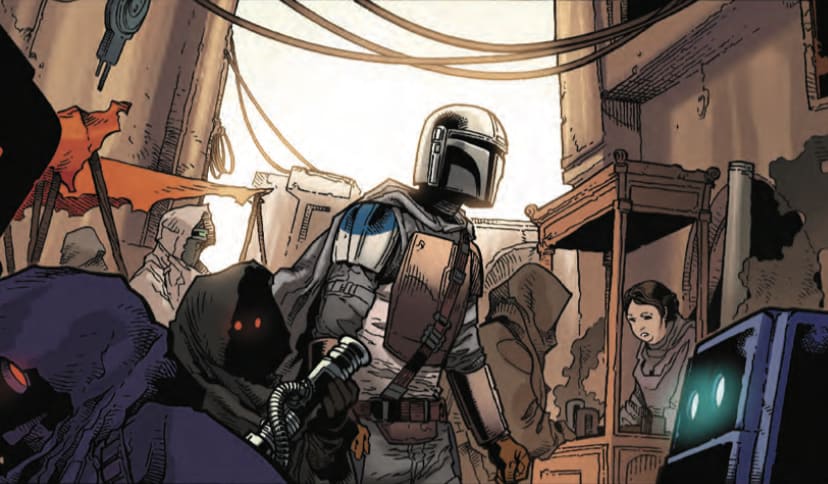 The Mandalorian’s armor keeps him safe, but his heart provides a weakness in it. Growing up and orphan himself, he must choose to betray everything about who he is or to protect a child in need of a home.