STAR WARS: VADER DARK VISIONS #2 (of 5): The Power of Fear is a Curious Thing… 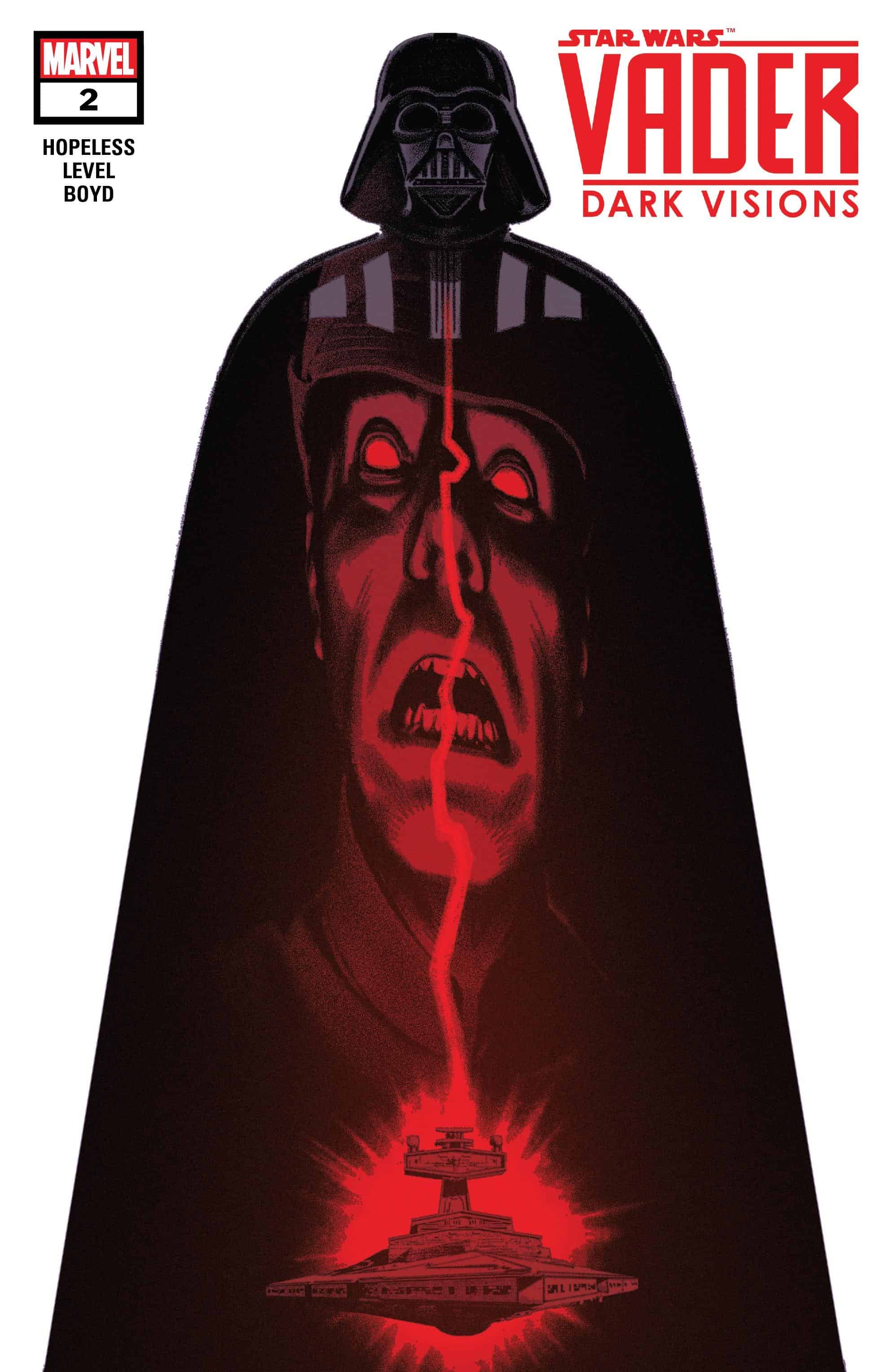 He does not accept failure! His demonstrations of displeasure when Imperial officers fail him are well known and never end well for those involved. Learn how far one such officer will go to avoid displeasing the Sith Lord and the risks that officer will take to avoid facing the ire of Darth Vader!

This second part of this five-part anthology focuses less on Vader himself but on the fear that he inspires amongst imperial officers who are sent to do his bidding. The story revolves around Imperial Commander Tylux, a Star destroyer commander, that fails to capture a rebel spy who has made off with secret plans for an imperial factory. Tylux omits this detail in his report planning to somehow find a way to explain it later. However, he doesn’t get the chance as Imperial high command sends a missive that Lord Vader himself is on his way to retrieve the spy! 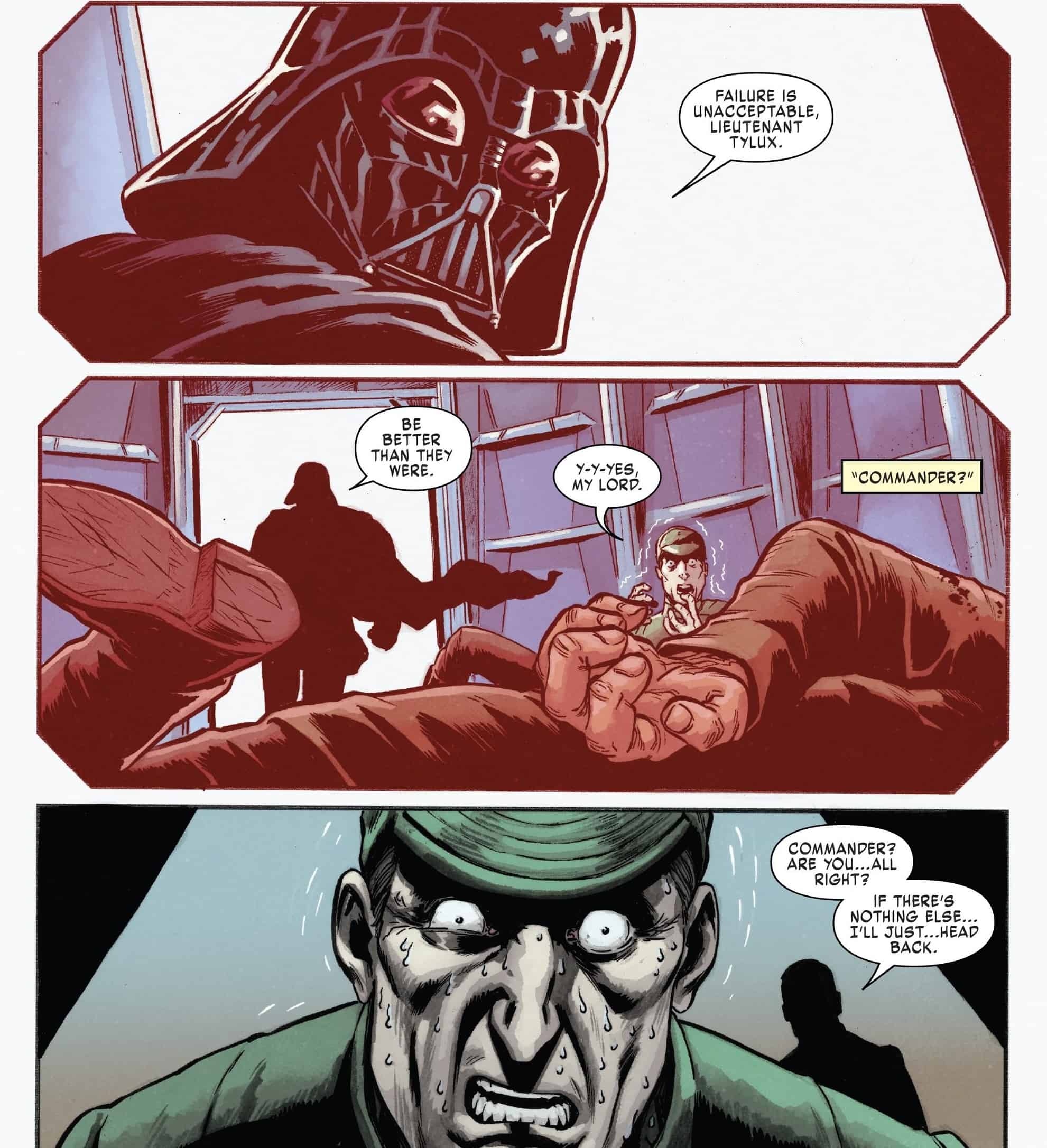 This throws Tylux into a panic as we learn through a flashback that he has born witness to Vader expressing his displeasure with officers in the past that failed him…and it’s made very clear through the art that the event had a deep and abiding effect on Tylux. 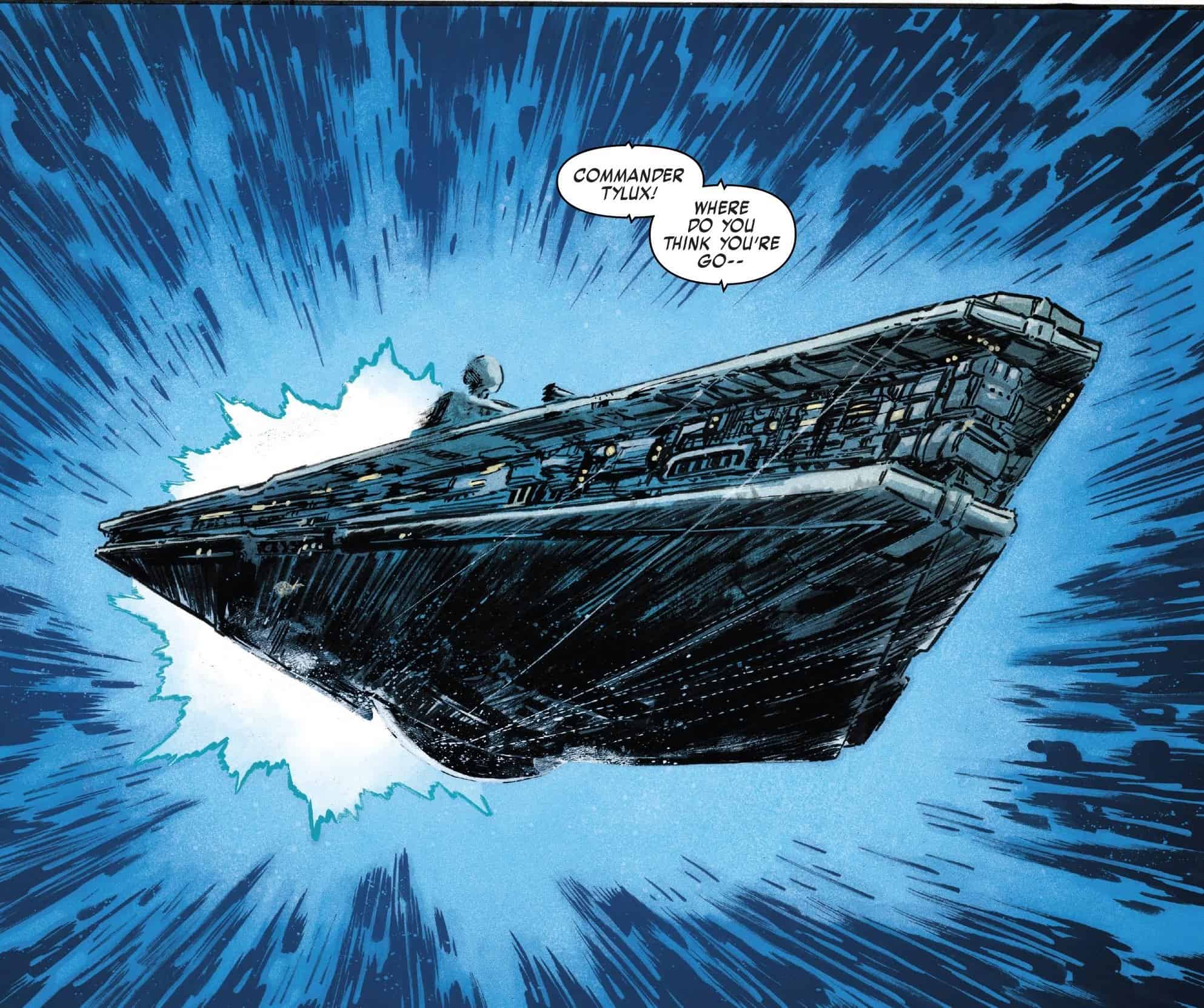 Hopeless spins another great yarn here. The main character Tylux and all the others, even minor characters like imperial pilots and the rebel spy along with his droid, who the imperials pursue recklessly driven by Tylux’s fear, all feel real and organic. The fear of failing Vader is really the theme here and it’s superbly communicated through both dialogue and the art and really jumped off the page for me in the story. The shout out to Empire Strikes Back is both clever and well-executed while at the same time taking the familiar scenario to a whole new level. 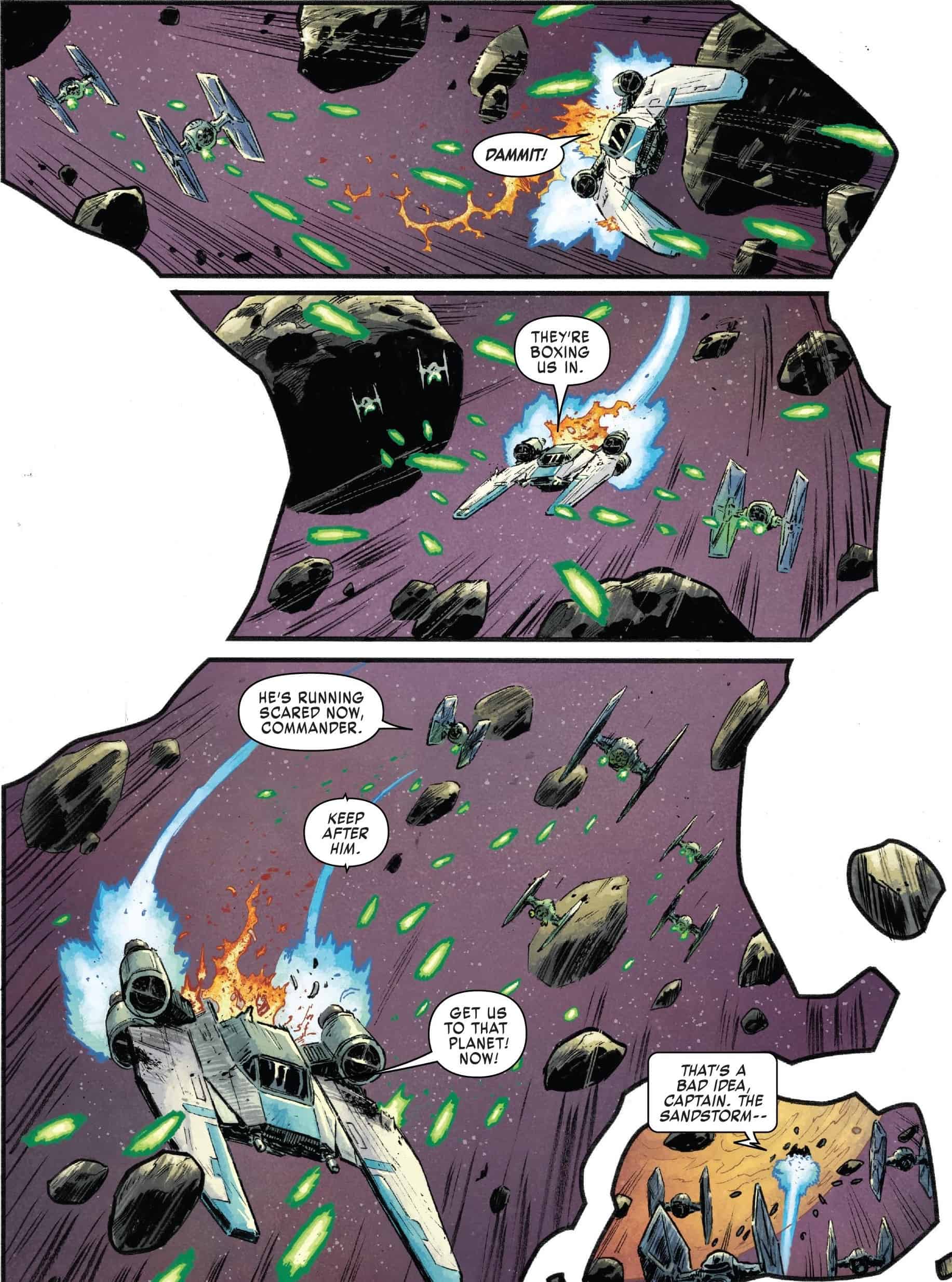 Brian Level’s art is on point and as stated before the art hand in hand with the writing communicate the dread that Tylux feels. There are some key panels and a particular splash panel that are absolutely awesome (trying to stay spoiler free here) but what I really loved and what stood out for me was the paneling!! 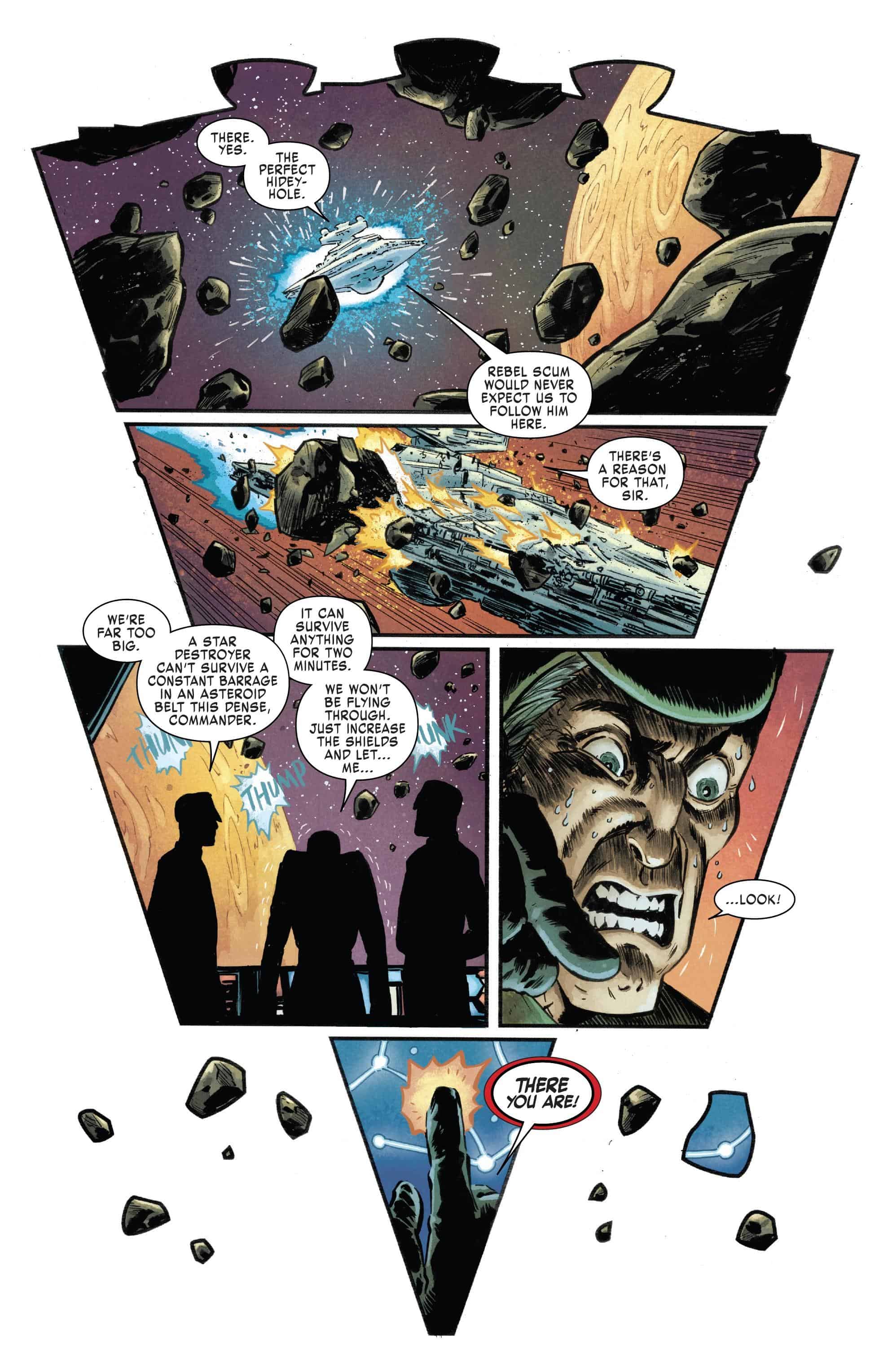 The paneling starts very geometric but then does some crazy things as the pursuit is on bouncing between geometrics and the much more fluid paneling layout also incorporating negative space that works particularly well for conveying the rapid motion of a high-speed space pursuit! It adds a great dimension to the issue actually using shape on the page to communicate pace and mood. The second last and last page are particularly brilliant at communicating from both a look and mood point of view as Tylux ultimately comes face to face with his fate. The coloring is solid from Jordyn Boyd and overall I liked the art which combined with the clever paneling elevate the art from just good to actually something excellent. Once again lettering is spaced as it should be by Caramagna, tight in smaller panels but never feels cluttered and the issue read easily for me.

Another great sliver of  Star Wars entertainment from the whole team on this issue. All the boxes are ticked. Great writing from Hopeless combined with very cleverly paneled, well drawn, solidly colored and lettered pages make this second chapter in this anthology series a thoroughly entertaining and enjoyable read. Hopeless really seems to be on his absolute A game with these self-contained single issues so far. I highly recommend it.

STAR WARS: VADER DARK VISIONS #2 (of 5): The Power of Fear is a Curious Thing…