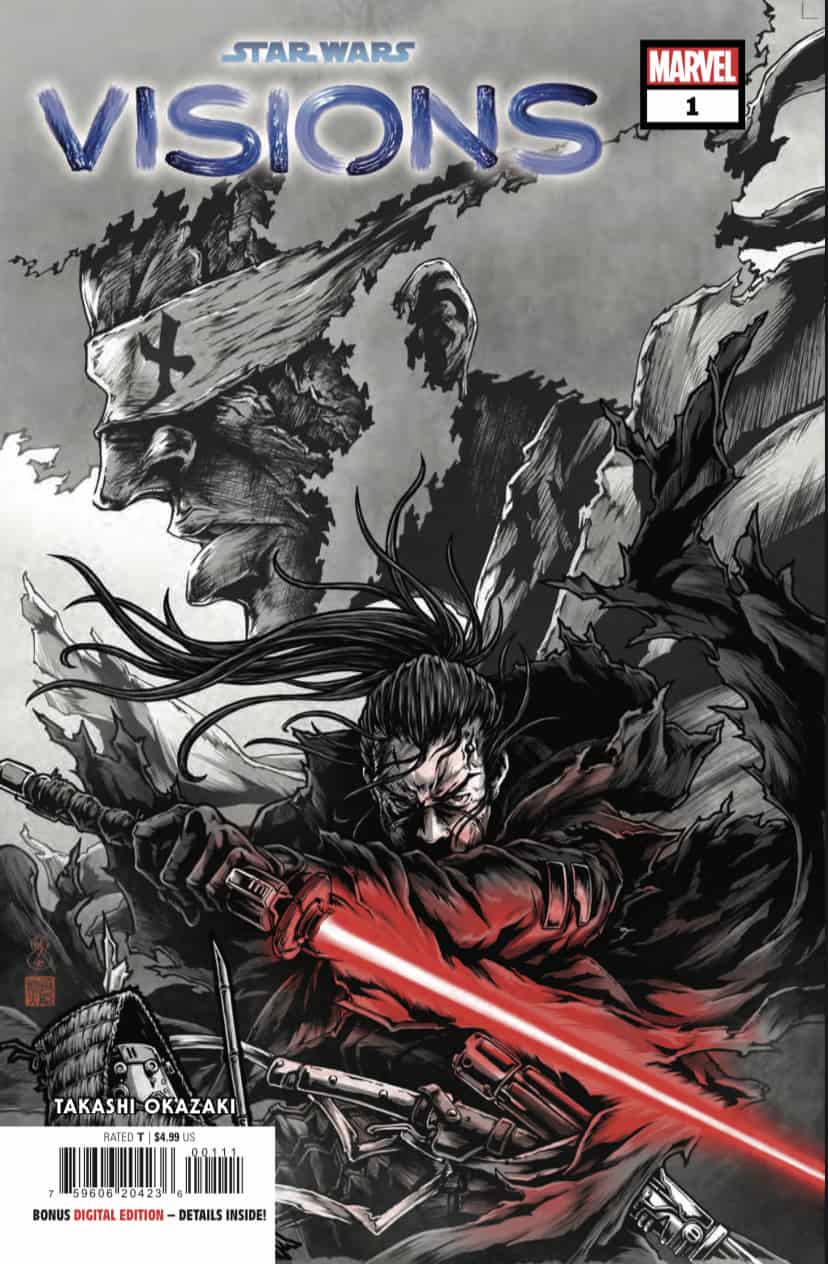 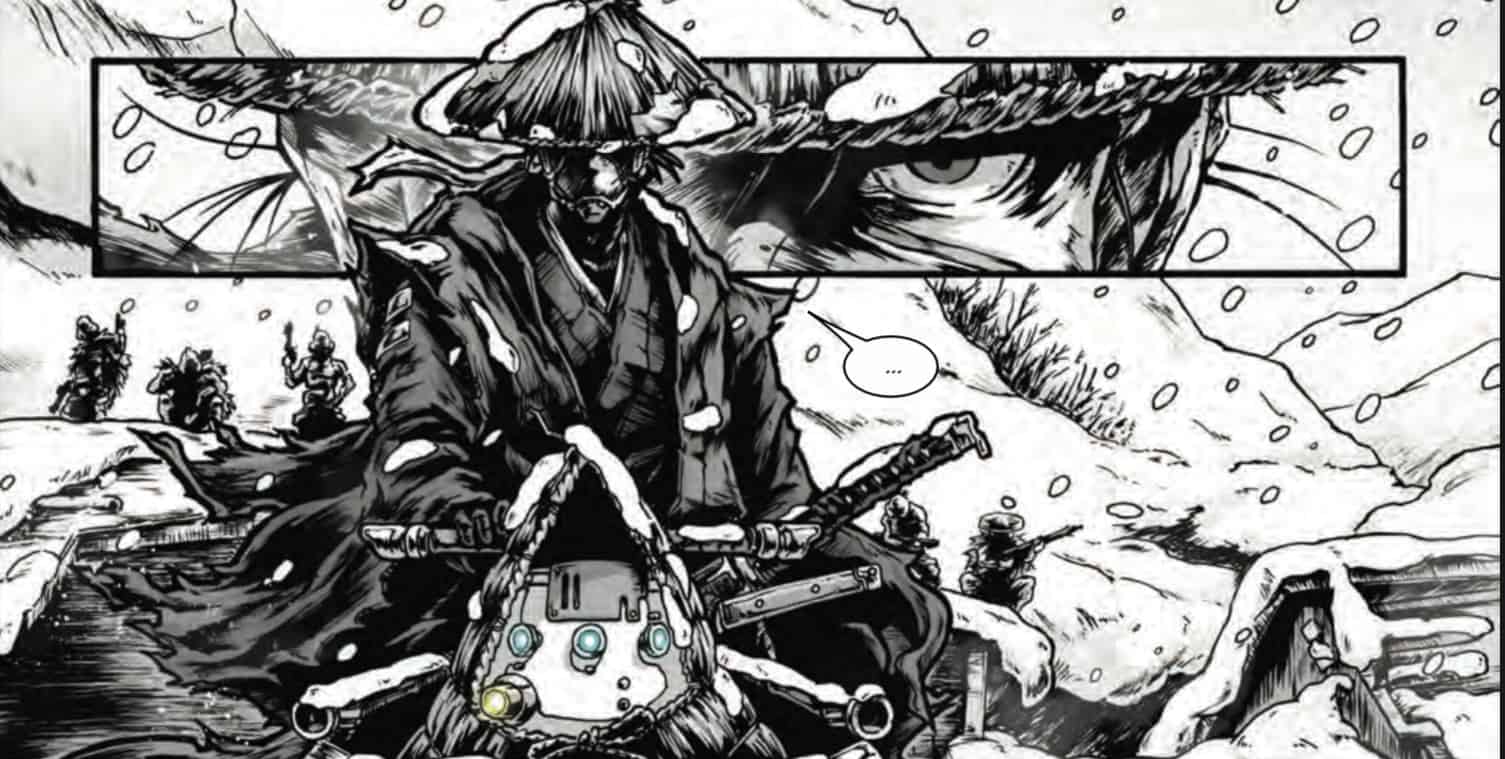 The anime anthology, Star Wars: Visions began with Kamikaze Douga’s “The Duel.” The short featured a heroic former Sith trying to atone for his violent pass. The Ronin returns in this comic story taking place prior to that tale.

About a year ago Disney+ releases a series of shorts called Star Wars: Visions. It featured various non-canon stories from a variety of animators. The showrunner was “The Duel.” This short featured a heroic warrior with Sith powers defending a village from a handful of bandits and their Sith leader. The short featured black and white animation, which was purposefully grainy looking to resemble legendary filmmaker Akira Kurosawa’s film style from the 50’s. The original Star Wars was partially based on the Kurosawa film “The Hidden Fortress,” so this short was more than an appropriate mash-up. Leaving out the grainy film style, but still focusing on the deep designs, this comic story blends the established style with rich manga ink-focused art. This blends both the Japanese styles of black and white cinematography with the also black and white world of magazine manga in the world of the most popular sci-fi/fantasy ever made. The results are stunning. To add a further connection to classic Japanese cinema and manga, when Ronin and his droid first appears here, he is pushing a carriage with the droid in it like in the famous series, “Lone Wolf and Cub.” The Mandalorian has evoked that image of warriors with a capable baby in a stroller look, but “Visions” furthers the image by showing a cart with many hidden weapons. 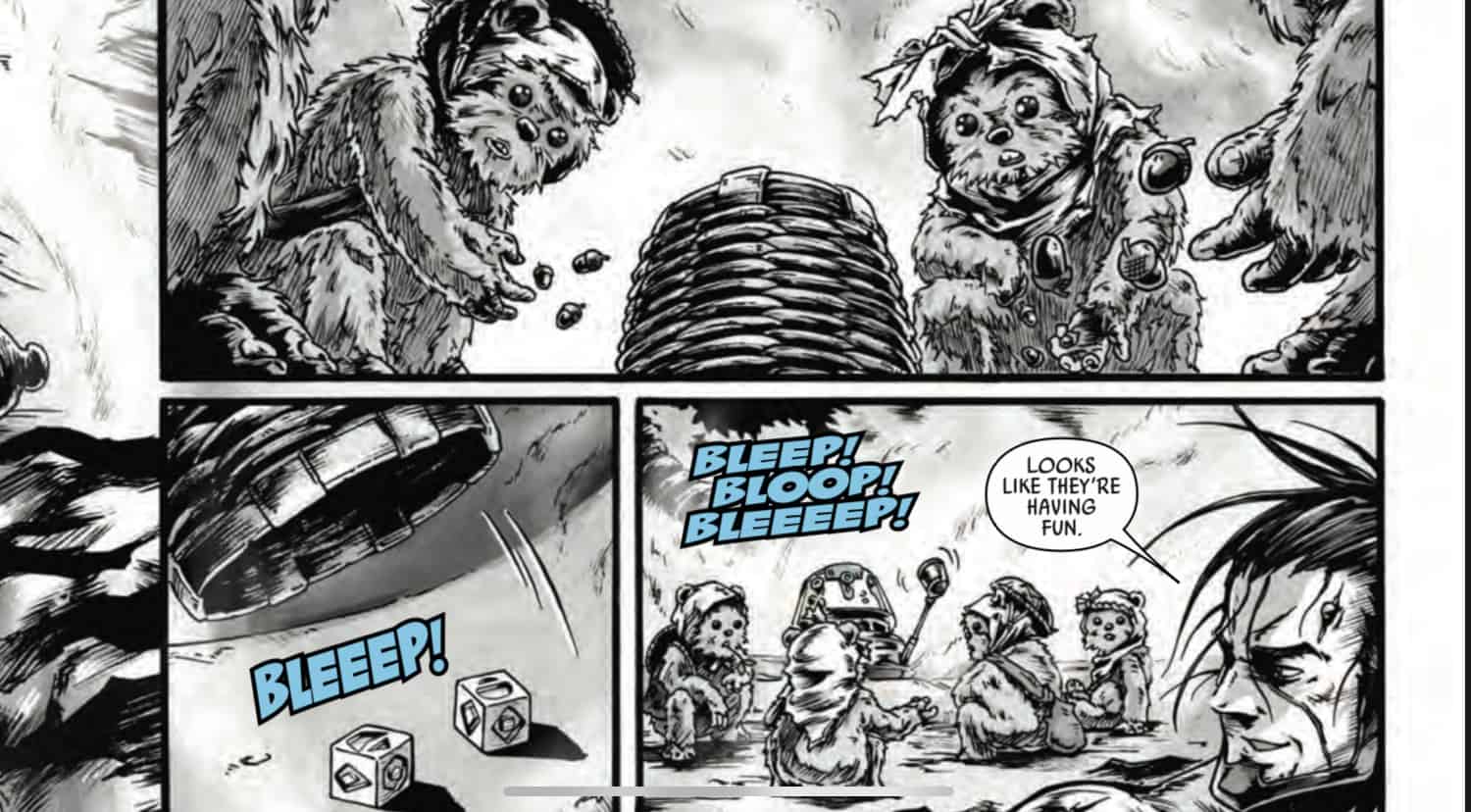 For all intents and purposes, this story is a prequel to the animation. It does not at all touch the novel “Star Wars: Ronin, which is a retelling of the short and the adventures Ronin has later on. What this is a chance meeting with a fellow traveler. That’s this issue’s charm. It takes momemts to show these characters enjoying sake and relaxing in hot springs. There are sweet moments like Ronin’s droid gambling with a band of Ewoks, and lighthearted conversation. The two men have an instant comradery. But as is the way of anime and manga, the climate goes from light hearted to serious in a mere second. As much as the lightheartedness is so very pleasant, when action does start it is hard, intence, and very satisfying. 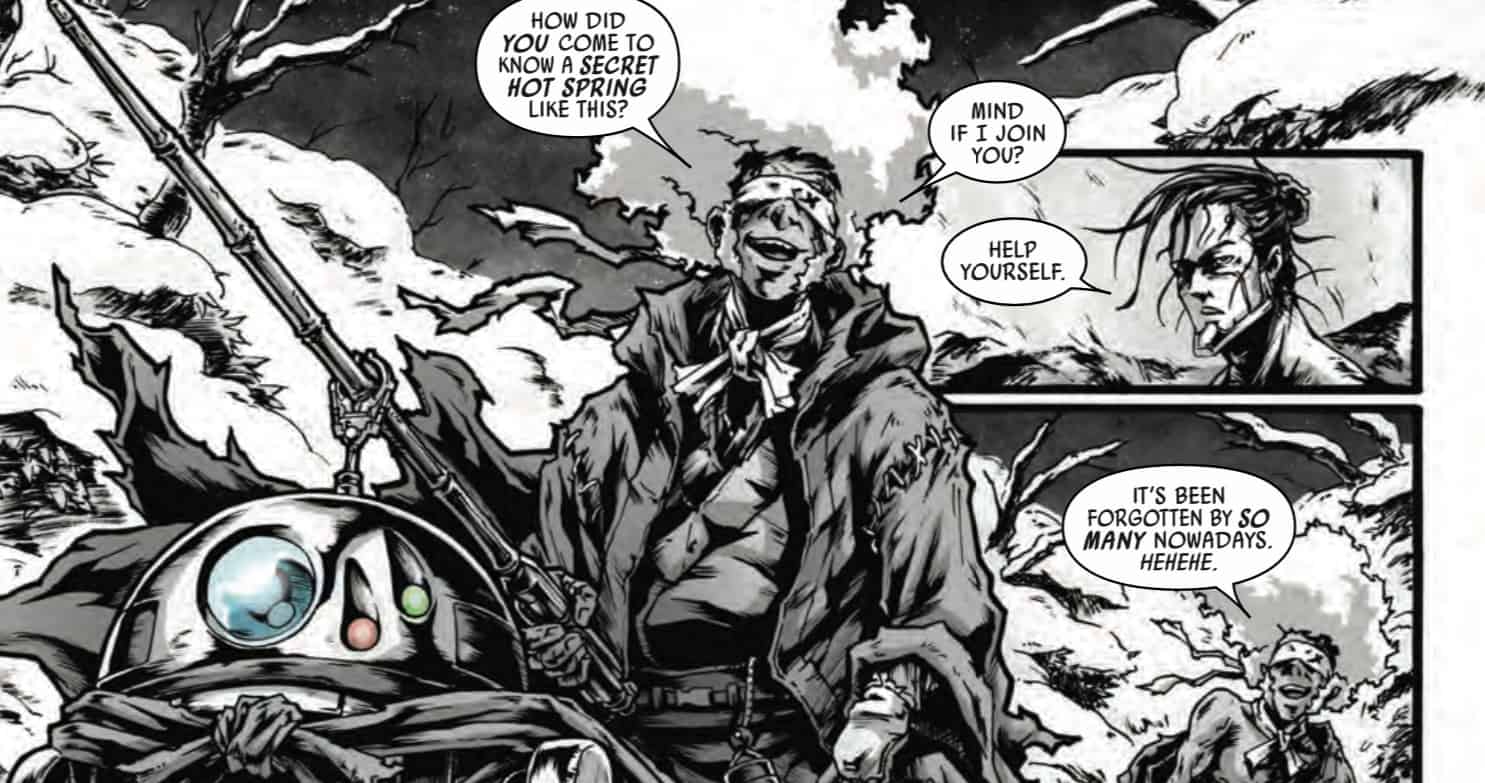 The art in this issue is just one of the highest levels ever achieved. The deepness in detail is simply dizzying. Fabrics, snow, rocks, and even metal show their true forms expressed in ink, no color. The only color in the issue is limited to energy like droid lights, lightsabers, and even loud sounds like shouting and droid bleeps. When lightsabers come out, the color comes alive. Not only do the blades shine, but they reflect onto the still black and white characters. This gives the art a stark contrast that adds a surprising level or realism onto an ink drawing. It is said that wolves do not see any color but red. At times this issue replicates that and it certainly adds to the mood. The only problem with that it is superfluous. Since it takes place outside of any real continuity. However since this is essentially a third instalment to this short after the animation and novel, this Ronin is creating a continuity of his own. 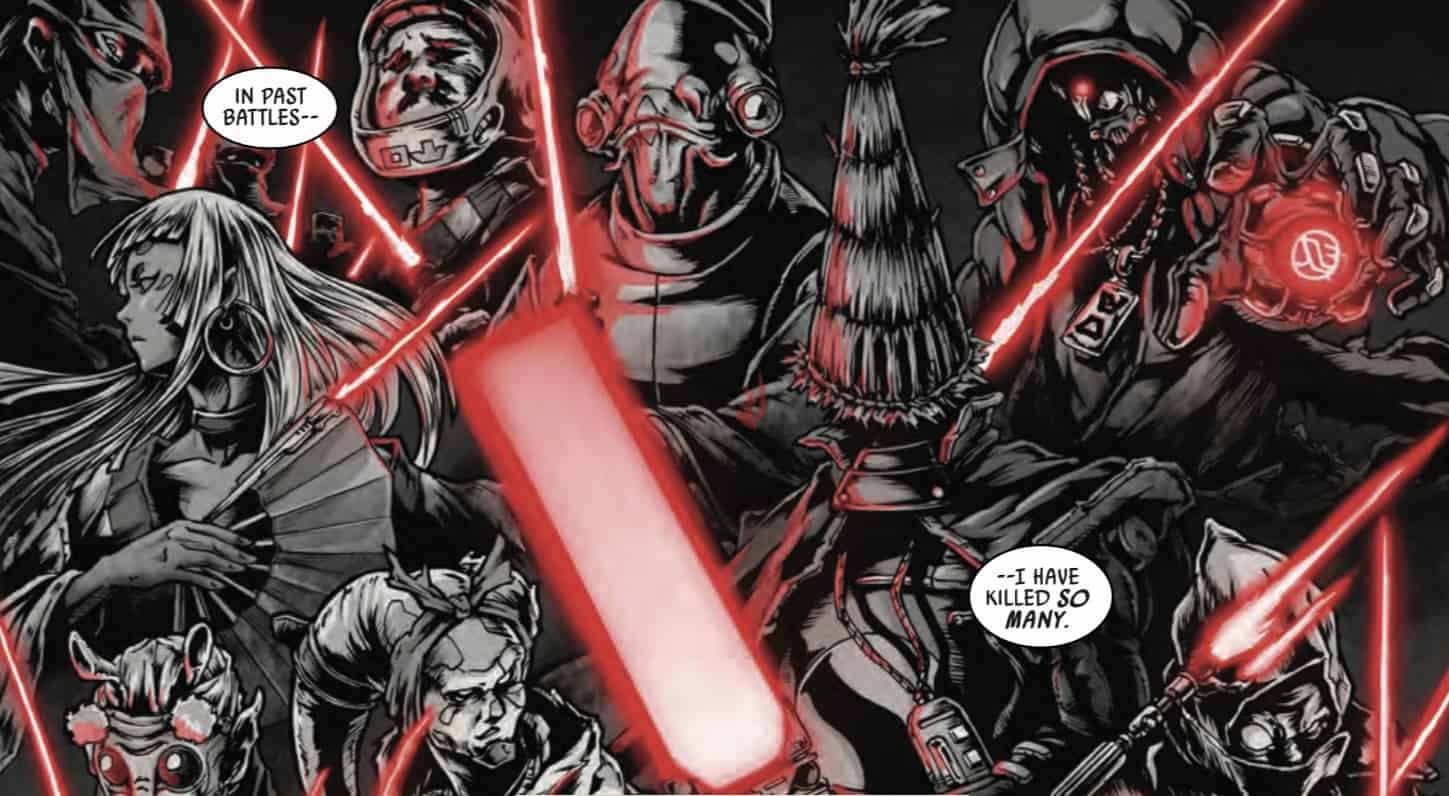 Sadly, this was just one story, one issue. It is hard to say what could come next, if anything. It could be more about Ronin. It could be further stories from other Visions shorts. Maybe there will never be another Visions issue. Only time will tell.