Stargirl: The Lost Children #1: I’m Wishing on a Star, To Find Out What It Means… 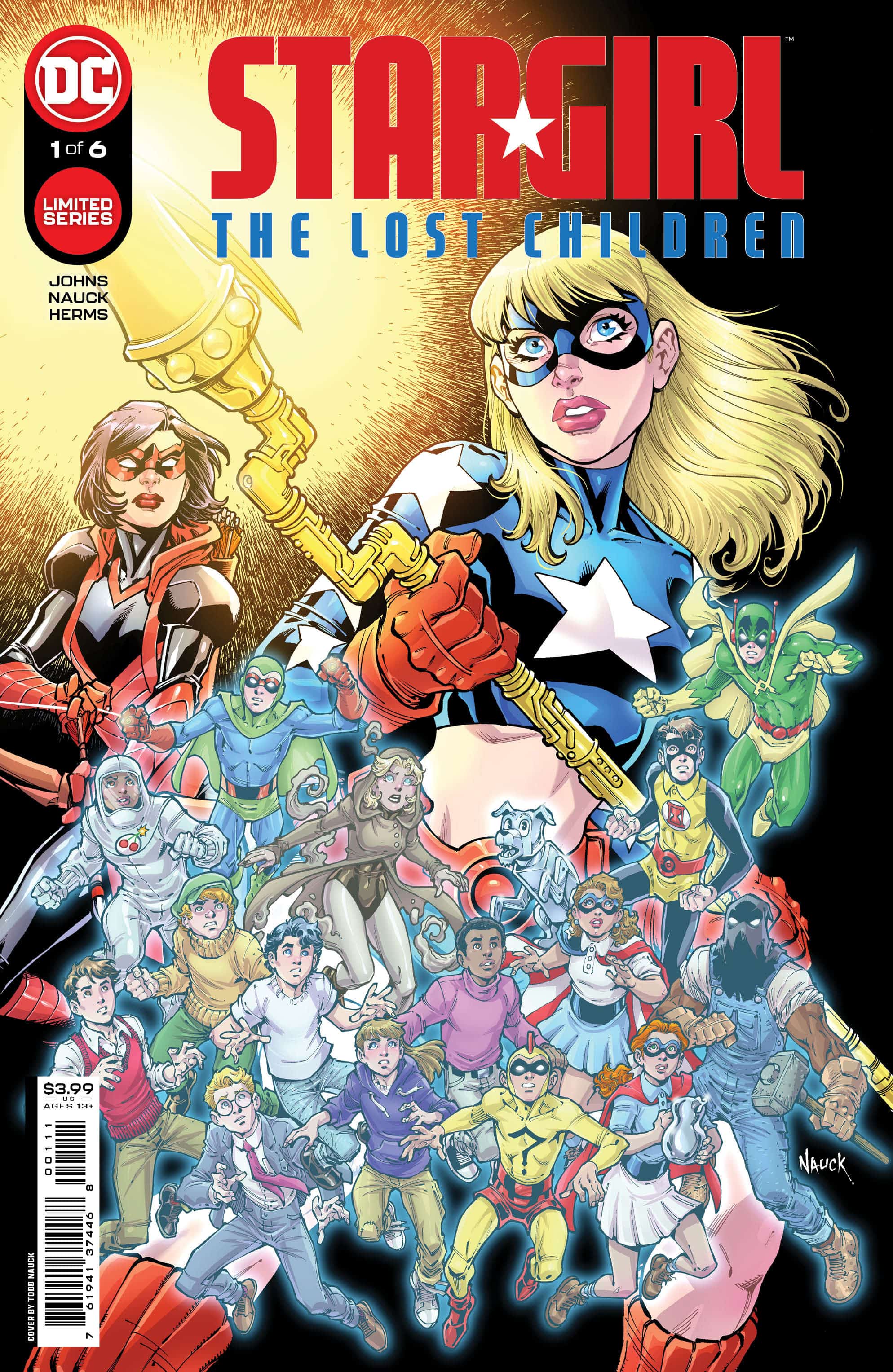 An epic teenage DC hero event brought to you by Teen Titans writer Geoff Johns and iconic Young Justice illustrator Todd Nauck! When Stargirl of the Justice Society and Green Arrow’s ally Red Arrow discover a tragic teenage hero from the past has gone missing, they set out to find him…only to discover he’s not the first teenage hero of the Golden Age to have vanished without a trace. But where have they gone? Who are they? And what does the Childminder want with them?

With last week’s New Golden Age one-shot dropping, Geoff Johns has already started this weaving stories between the JSA series coming, and this fifteen-issue Stargirl maxiseries, that’s dealing with a mystery that swirls around the child sidekicks to these Golden Age heroes, who have been missing, with Red Arrow and Stargirl leading up the investigation. On top of this, there’s another character, Dan the Dyna-Mite, former partner of Silver Age hero TNT, involving the rash of missing child sidekicks. This looks like a mystery that’s going to dig deep into some of the most obscure continuity that’s been neglected for so long.

The story starts off with Courtney (Stargirl) and her friend Emiko (Red Arrow), have been playing hookie, and Court’s mom is livid. Grounding here, and limiting her activities as Stargirl. It’s a fun little situation, because teen sidekicks often were orphans (not always the rule. Wally West being the most memorable), so seeing her family who fully supports her life as a superhero, as long as it doesn’t interfere with her education. The energy this team has given Courtney and her family gives me that warm fuzzy feeling. After getting grounded, (MOMS ARE THE WORST!!) Emiko sneaks into Court’s room, when they’re given just another clue that will lead them down this rabbit hole, and considering it’s fifteen issues long, it’s gonna get deep.

Todd Nauck’s back on art here, and his style is well suited for this book. It gives Courtney, Emiko, and the rest of the kids pictured youthful, and energetic. Nauck got his start with the X-Men-adjacent Image title NewMen (I told you), from Rob Liefeld’s Extreme Studios, who’d eventually join legendary comics writer Peter David, on the teen team of Young Justice. Young Justice would in time become the precursor to Geoff Johns’ Teen Titans, so having him on art duties for this book seems like a natural fit. I’m eager to see how his style will look on the missing Golden Age kids.

Stargirl has been one of the best developed teen superheroes since her creation, with the majority of that development being under Johns’ pen, which makes sense, as a sister who passed away was who he based her character on. Courtney’s come a long way since her days as a teen superhero, with her stepdad, Pat Dugan, to a fledgling member of the JSA, to the Young All-Stars, before everything was reset, and the Justice Society was erased from continuity at the beginning of the New 52, where she became a member of the Justice League of America, as well as the Justice League United, before fading into obscurity, to come back in the Stargirl Spring Break Spectacular earlier this year, by Johns and Nauck, where the announcement of the JSA returning to the DC universe was trumpeted.

While there was a lot that I liked about this first issue, there was a lot that just rubbed me the wrong way. The biggest thing for me was, where is this story taking place? Like with the New Golden Age one shot, I’m not exactly sure which Earth this is taking place on. It almost seems like it’s on the Earth that her canceled show (boo) is on, but nothing has been set in stone. Luckily this is something that can, and I’m hoping will be revealed, in the coming months, so to that I say hey, Stargirl, hey.

Stargirl’s back in her own book, or rather her own teen team that’s in the development stage, that looks to be filled with teen sidekicks of Golden Age, as well as their younger legacy characters here, building around a mystery that goes 80 years back. Court and Emiko are fun, and Johns handles the family chemistry well here. As a continuity buff, it’s always a treat reading stories by Johns, Waid, or Busiek, who really know their stuff. Add in Nauck’s penchant for drawing young characters young. If this team can make this mystery something to draw readers in, this could be a big hit for DC.

Stargirl: The Lost Children #1: I’m Wishing on a Star, To Find Out What It Means…