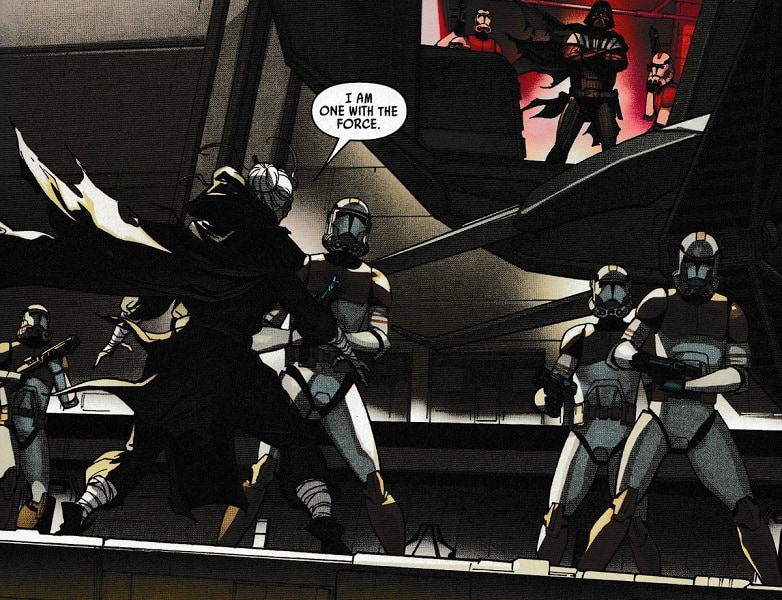 Before Jocasta Nu can escape, she must face off against the deadliest foe she has ever met:  Darth Vader.  He wants her alive.  She wants to protect the information only she has at any cost.  Can Jocasta safely escape from the man who helped to slaughter her entire order? 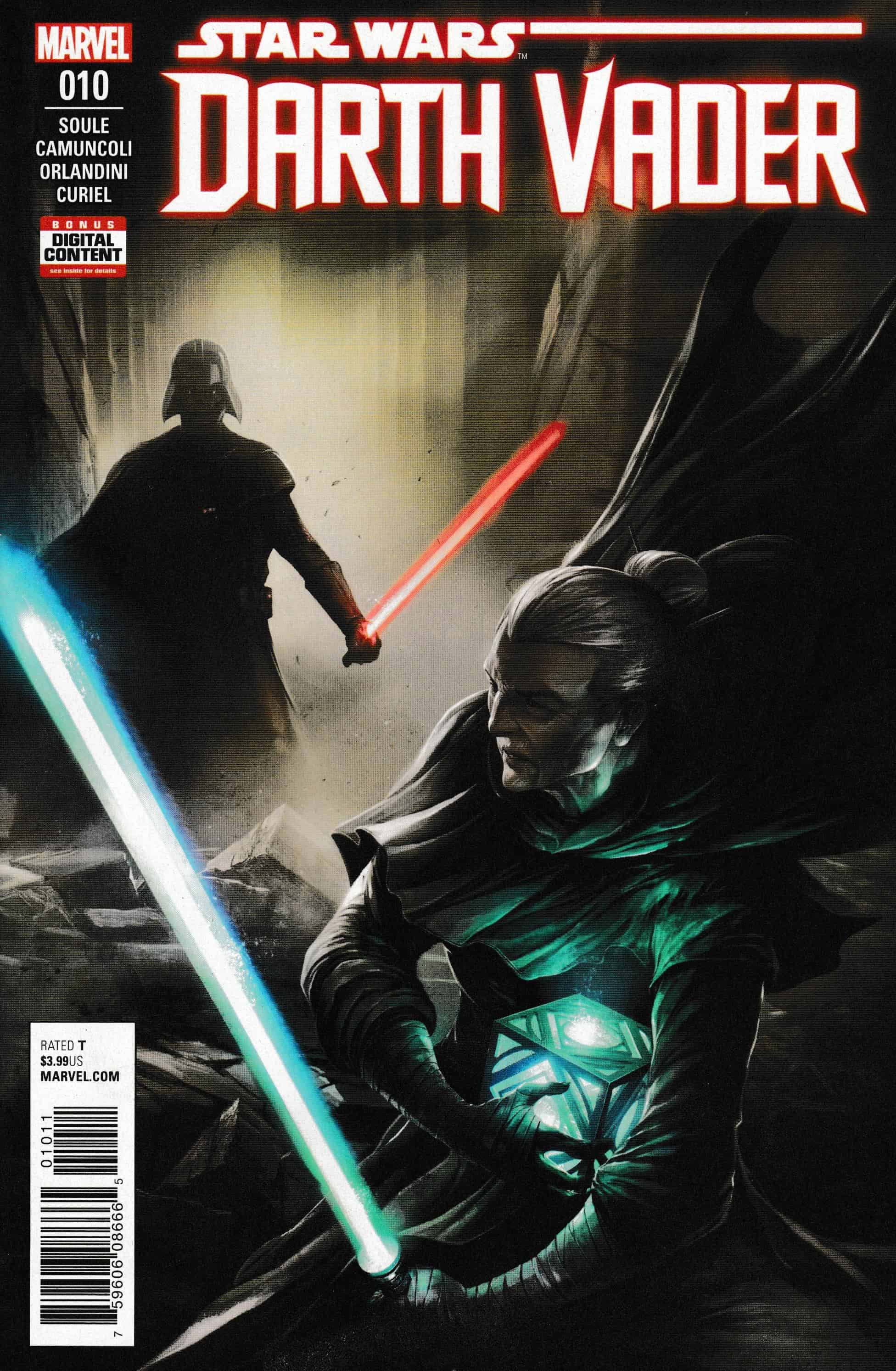 The Emperor has decreed that Darth Vader let a particular Jedi live:  Jocasta Nu.  Vader doesn’t know why, but he doesn’t question his order.  Jocasta Nu, on the other hand, has infiltrated the Jedi temple to purge the library of all its information.  She is successful in wiping everything clean except for a single data chip she carries with her.  But Vader has tracked her down and she now must get past the Dark Lord of the Sith.

Jocasta fires her rifle again and Vader dodges.  Each blast he dodges or deflects.  She tries to distract him with words.  She now knows that he is Anakin Skywalker and suddenly all things make sense.  She continues to taunt until when she pulls the trigger, the gun doesn’t fire.  Her lightsaber that was powering the rifle is used up, broken and melted.  She hurls the rifle at Vader as it begins to overload.  As Vader catches it with the force, she also hurls the (now empty) data books off the shelves.  The gun explodes, knocking both combatants off their feet.

The explosion tears through the wall and the troopers outside notice.  Jocasta sees the hole now made and grabs a spare lightsaber.  The stormtroopers (or are they still clone troopers at this point) see her as a Jedi and open fire.  The commander of this particular garrison receives the report and is on his way, but not before Jocasta knocks down several of the troopers.  Others notice another figure in the hole, brandishing a lightsaber.  They identify him as another Jedi and open fire on him as well.  Jocasta seems amused at Vader now having to fight her same battle.

The commander arrives and orders his troops to stop firing on Vader, but the Dark Lord isn’t too pleased nonetheless and snaps the commander’s neck.  Meanwhile, Jocasta is losing her battle.  Her lightsaber is knocked away and she is backed against the side of her building with a sheer drop behind her.  Faced with no way out, she backs off, falling to her death. 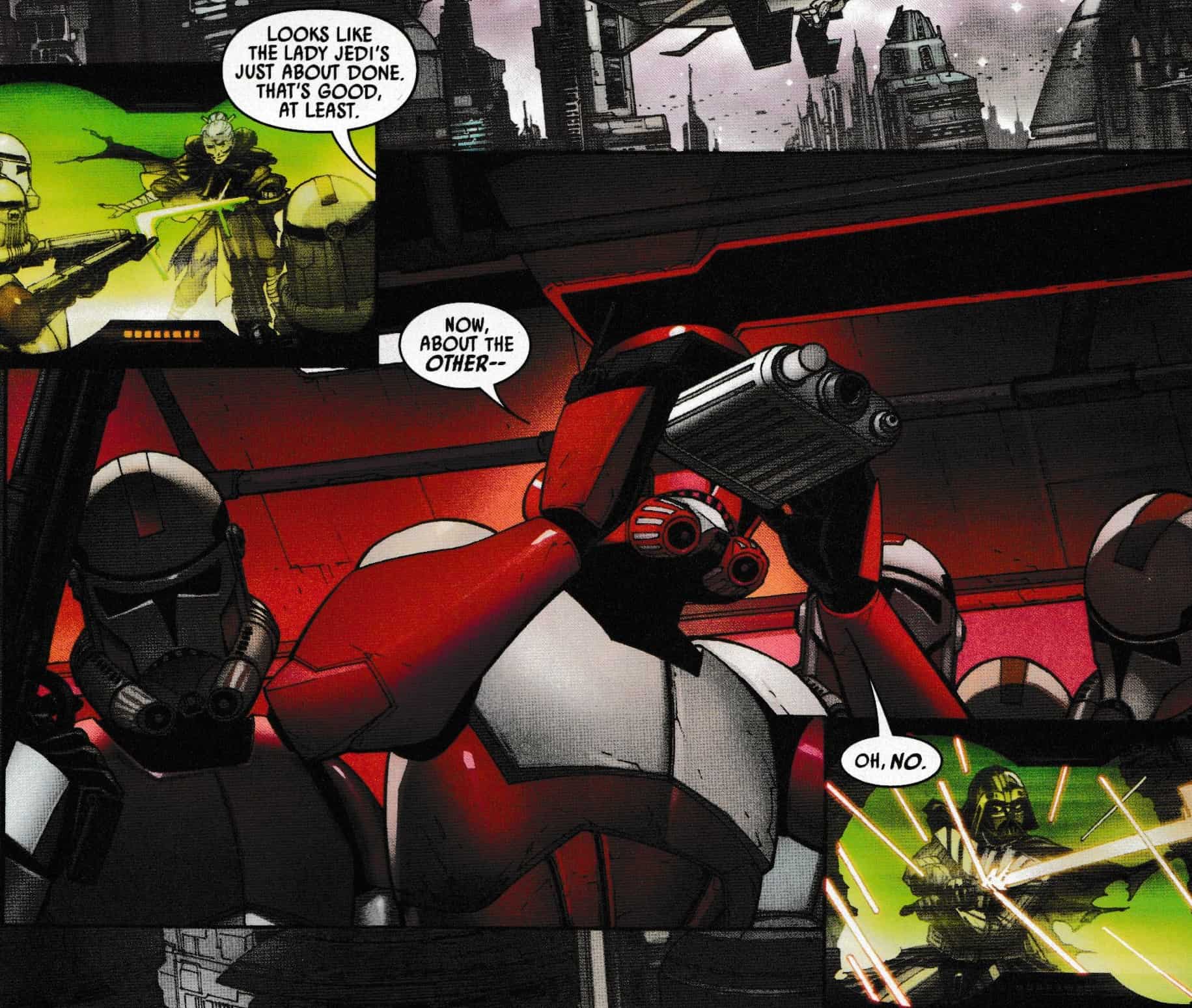 Or at least she would have…but Vader catches her.  He brings her on board his craft where the troopers give him the data chip she was carrying.  But when Jocasta reveals that Darth Vader is also a Jedi, Vader tosses the troopers out of the ship.  Vader explains what was on the chip, a list of force sensitive beings.  But the question is why the Emperor wanted Jocasta alive.  She knows it was for that information.  Maybe Vader wasn’t as special as he was led to believe.

With a flash of his lightsaber, Vader ensures his unique position in the galaxy.

A few things to remember…  Darth Vader is not widely known as the ex Jedi Anakin Skywalker.  The only troopers who may have known this were his 501st Legion that helped to invade the temple.

Second, Vader has no problems lying to Palpatine.  He’s done it before, he’ll do it again.

And third, it’s human nature to want to feel special and Palpatine exploited this with Anakin.  And let’s face it, Vader needs to feel unique.  He needs to feel like he occupies a special place in the hierarchy of the Empire.  After all, he helped to slaughter his friends, accidentally killed his wife, and completely destroyed the government that took him in.  And he knows the type of man that Palpatine is.  There can be no replacement for Vader.  If there is, he knows that Palpatine would replace him in an instant.  He was horribly damaged and is only a fraction of the “Jedi” that he was before he fought Obi-Wan.

This series so far is all about Vader finding his place in this new order.  And here, he is forced to face the fact that Palpatine may be looking for a “better” Vader.  Someone who doesn’t let his limbs get chopped off and burned. 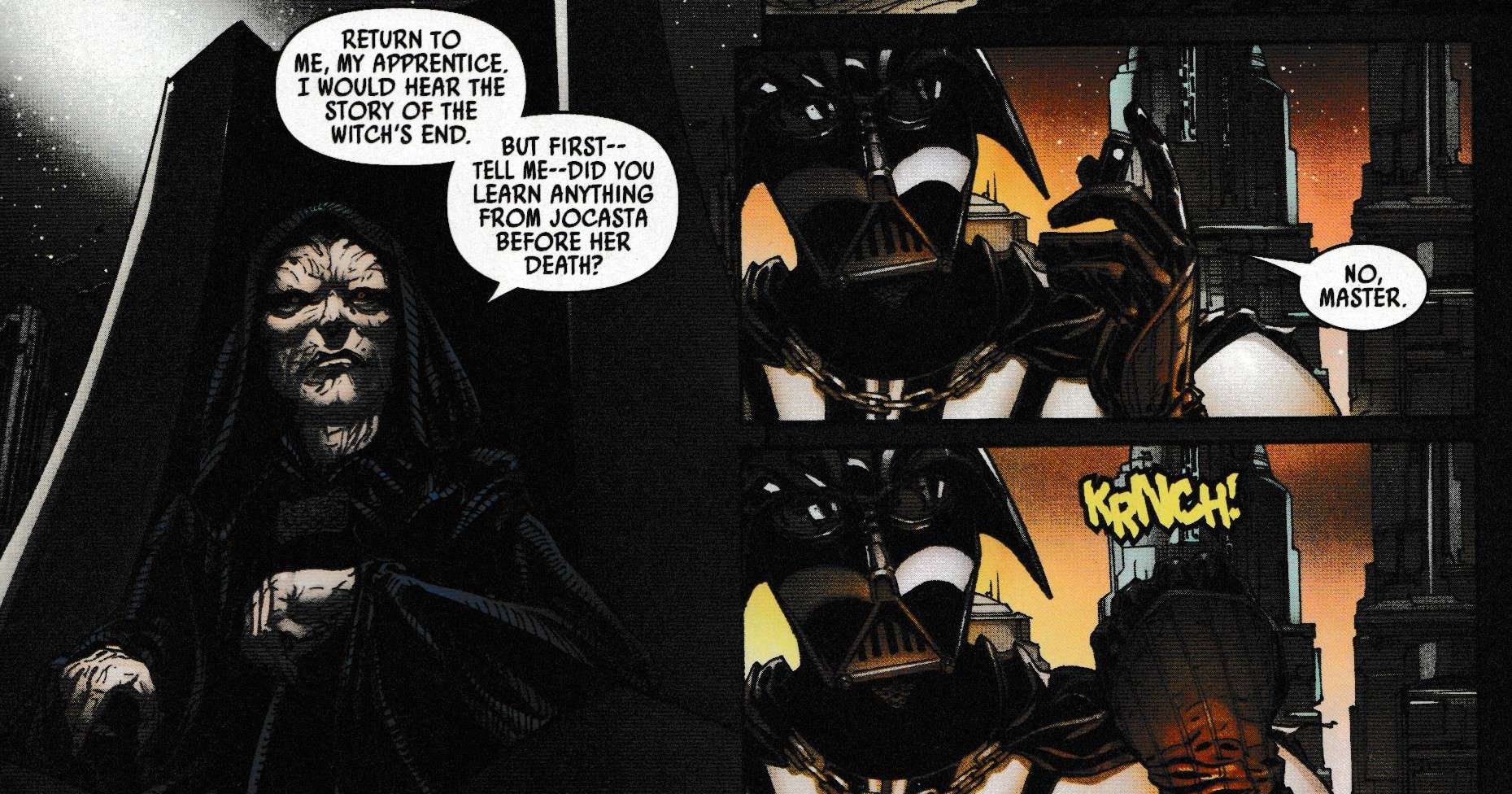 In the original movie, Darth Vader was just a big bad guy.  In the prequel movies, he was revealed to have once been this wide-eyed child with hopes and dreams who was willing to sacrifice everything for power.  Soule continues this exploration of Darth Vader with what is an absolutely amazing tale.  Most of this book is not centered around the lightsaber fights or the blaster bolts going back and forth (although I do love the idea of a lightsaber powering the rifle and Camuncoli’s art definitely gives the up-close feel of a well-directed action movie).  Instead, it’s the dialogue that goes back and forth.  It’s the small scenes like Jocasta accepting death (and quoting “Rogue One”) or the glare of Vader’s lightsaber before a Jedi’s off-panel death.  Vader may have a mask but you can really tell the inner conflict in his expression (another testament to Camuncoli’s art considering you can’t see anything but the mask).