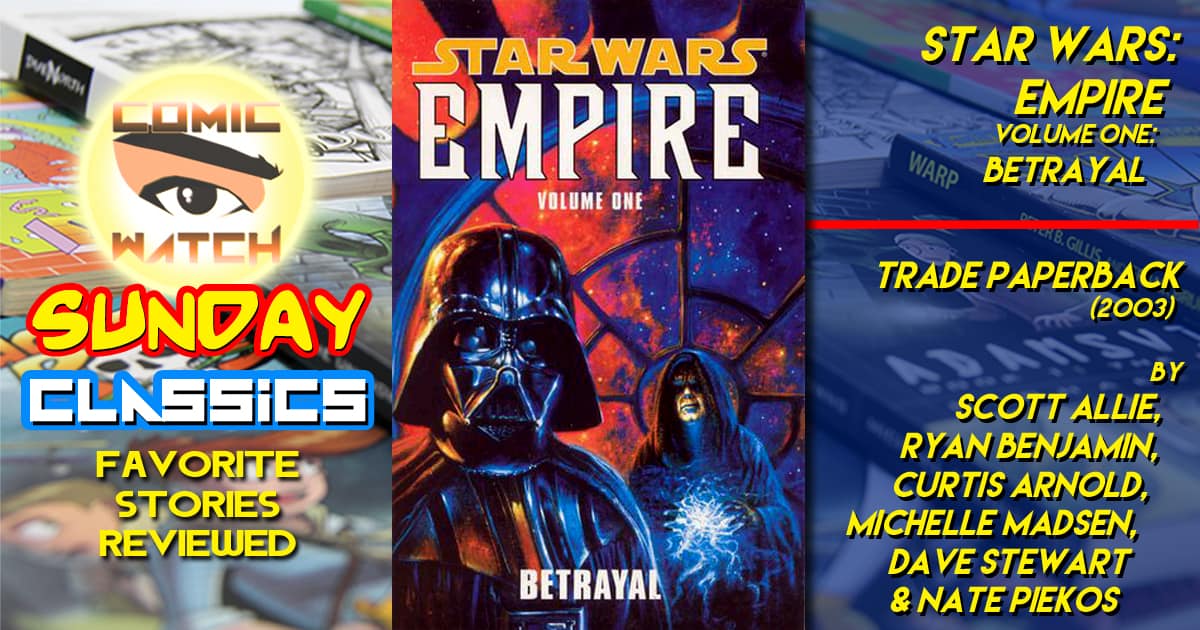 “Pursuing rumors of a lone Jedi living on a distant planet, Vader is separated from his master and plunged into a battle with an army of bounty hunters, including the infamous Boba Fett!” 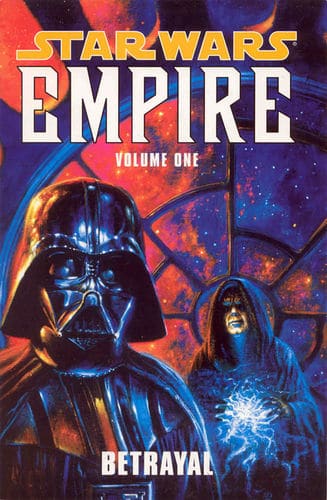 The Empire is in turmoil, Darth Vader and the Emperor are opposite ends of the Galaxy and there is a new plot afoot, the enemies of the empire are consolidating power, the time is ripe for a CRACKDOWN! This transgression will not be suffered by the undisputed masters of the galaxy, the Sith!

(This book takes place a few weeks before A New Hope and has been partially retconned by the current slate of movies, which disregard all EU lore besides their own)

We open on a training exercise, with dozens of Stormtroopers taking on Darth Vader. (one of them even almost hits him, and is rewarded with a reflected Blaster bolt to the face, who said Vader was a bad boss?) He compliments them on their marksmanship and assigns them to Governor Tarkin’s transport. The base commander, Kadir, protests and is swiftly and hilariously shot down by Vader, who tells him to accept his offer or share his predecessor’s fate (early retirement on a beach?) 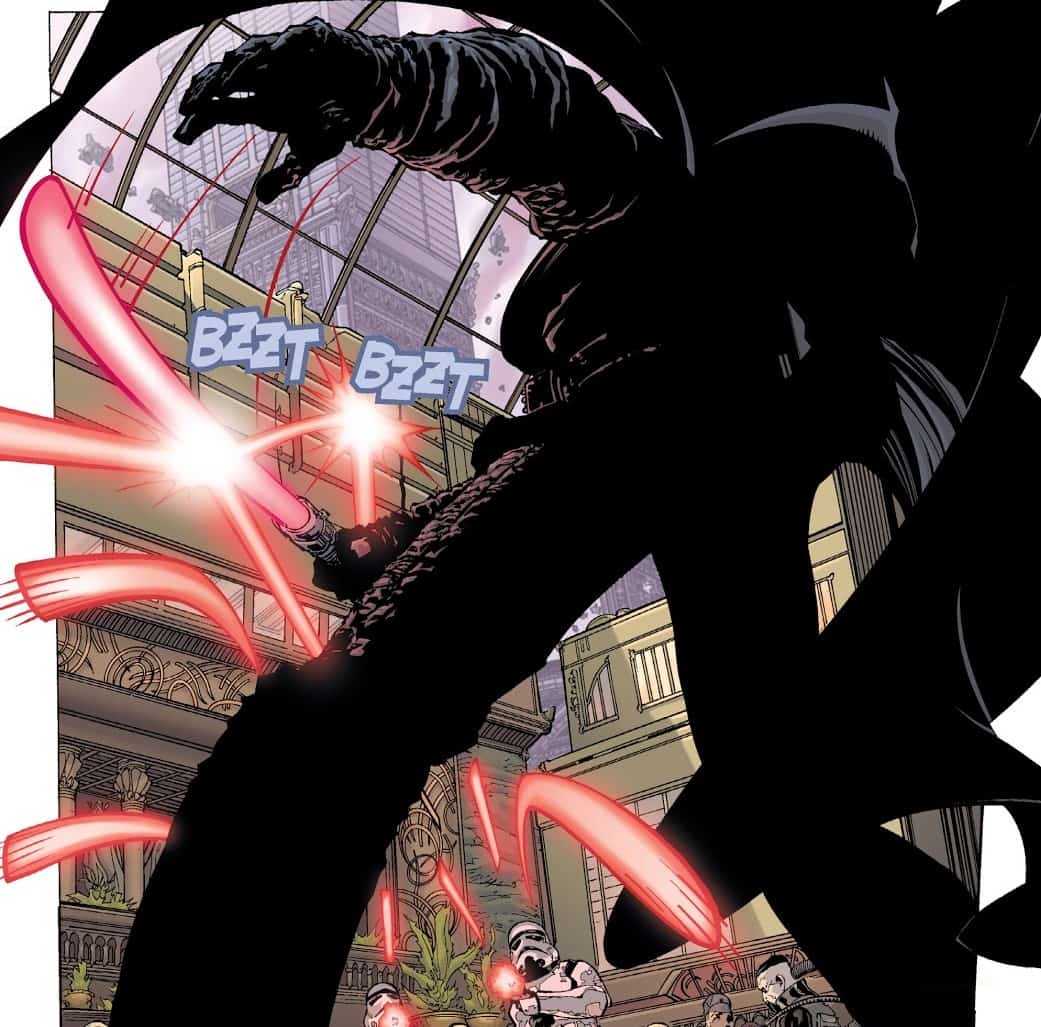 Vader walks out on a balcony to reveal we’re on Coruscant, nearby a plan is being hatched between Kadir and Grand Moff Trachta, a high up commander in the Empire, or so it would seem. He walks into the next room to find the Emperor, postulating on his 31 years in power, he tells his Officer he is preparing to leave Coruscant to be aboard the Empire’s new superweapon, The Death Star! Suddenly Palpatine calls Vader into the throne room, he has a project for him. 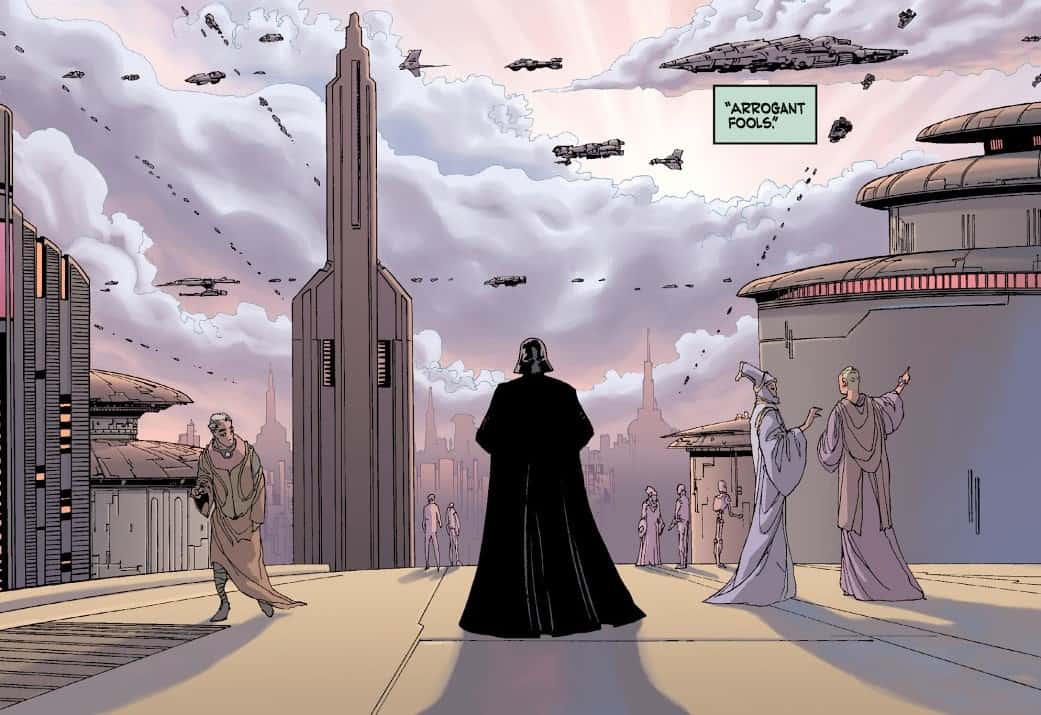 We move back to the Grand Moff, clandestinely moving across the city to a secret space, where he meets an officer of the Empire, he enquires how the reconditioning is going, the officer shows him a Legion of reconditioned Stormtroopers, suddenly the Grand Moff yells for the troopers to arrest the Captain, as the Captain protests he commands them to shoot him, were he capable of grinning I’m sure he would as the captain dies. 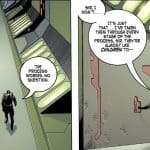 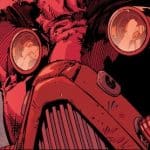 We jump back to Vader and Palpatine, Palpatine is saying that a party of Stormtroopers was annihilated by an unknown party on the planet Dargulli, and reports say this vigilante was wielding the weapon of their sworn enemies, a lightsaber! Vader expresses apprehension leaving his master’s side, he feels he still has so much to learn. Palpatine instantly rebukes his apprentice, he’s a dark lord of the Sith, not a dog, he should hold his head high! Besides, who’s to say who this lightsaber wielding maniac might be, it could be the vengeful offspring of a fallen Jedi, perhaps even Skywalker!

Elsewhere the Grand Moff Trachta is meeting one of his compatriots, Grand Moff Bartam, they are conspiring against their superiors. Bartam seems a bit apprehensive but doesn’t exactly run off, Trachta tells him they don’t need to openly challenge the Sith, they just need to subvert the military enough to upset power in their direction, they clearly don’t know who they’re messing with. He introduces Bartam to Moff Kadir and tells him the plan, eliminate the Sith and save the Empire! Master and apprentice are about to be separated for the first time in years, the plan? Make sure Vader never makes it back! Simple! 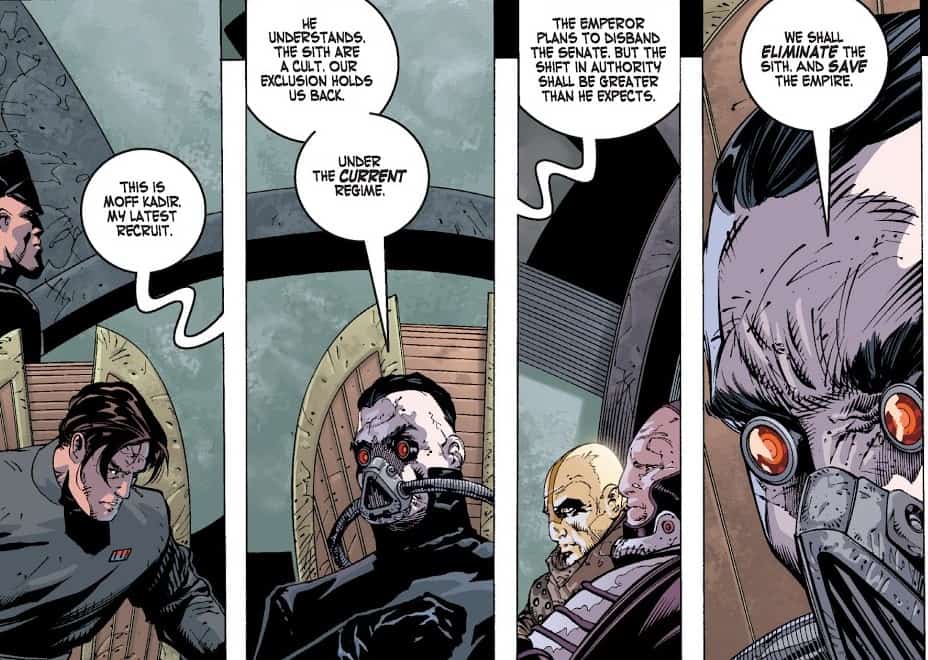 We pull back to Vader, aboard the Star Destroyer Mathayus with the Admiral Coy. Coy questions why an entire regiment is required to cull one planet, one person? Vader chokes his backtalking butt like a good Sith Lord, and acts like a total jerk after (haha! love it!) 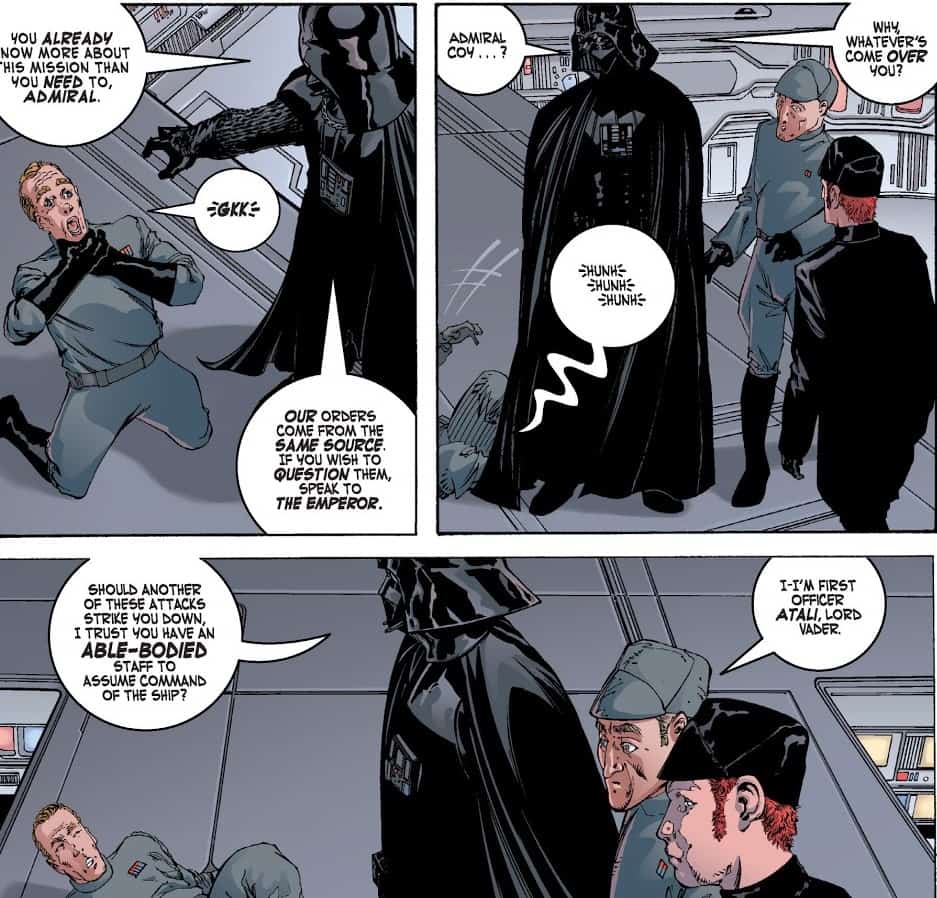 Oh no, you fell! Whatta jerk.

Back on Coruscant Kadir and Trachta are discussing their meeting, Trachta isn’t sure Bartam is on their side, no matter, what’s another high ranking official to kill when they’re already ending an empire? When Kadir protests Trachta enlightens him on one inescapable truth; (that I myself stand by) You can always trust an enemy to attack, you never know what your friends might be planning. 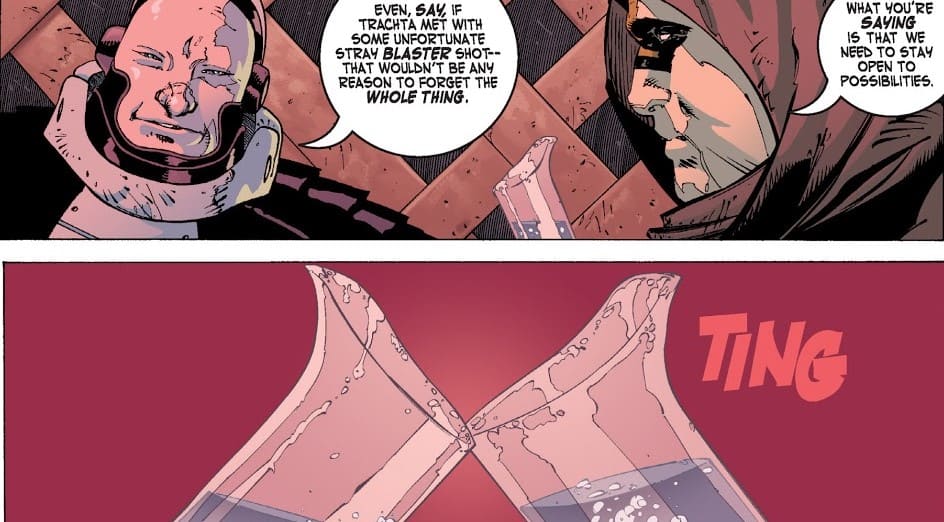 Back on Vader’s ship, a rebel transmission has been intercepted on a nearby planet, the Admiral wants to check it out, hoping to bag an enemy commander or something, initially, Vader ignores him but decides it might be worth checking out. 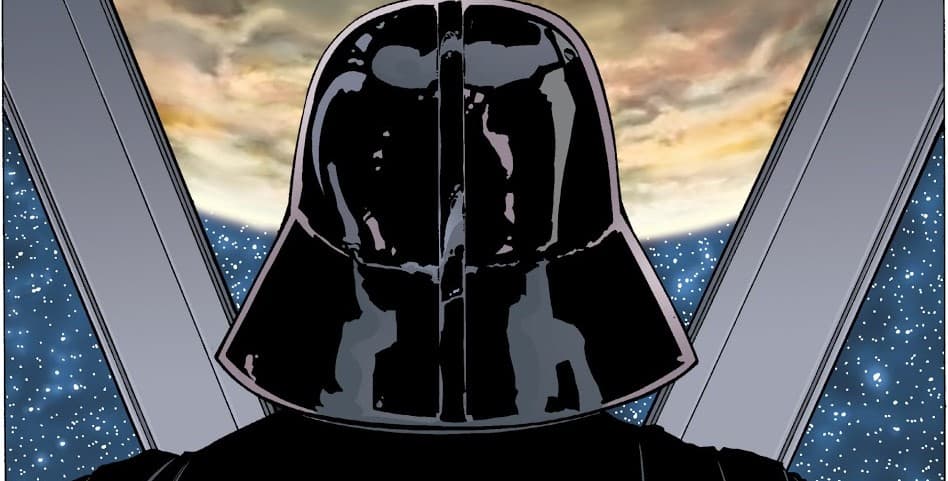 We move over to Grand Moff Bartam meeting with another officer in the imperial army, discussing Trachta’s plan, Bartam says were Trachta to meet an unfortunate end, that’s no reason to let the plan die…

We head back over to the Mathayus bearing down on a Rebel vessel, which has been emitting a distress signal and is refusing to accept their hails, they lock the massive ships tractor beam on the small vessel and pull it aboard, though Vader feels no major significance on the small ship, he believes there might be another coming they need to be ready for, first step is scuttling the little freighter. As soon as they cut the door open a giant thump is heard, they seal the airlock, but it’s too late, faster than you can say IT’S A TRAP the ship explodes! 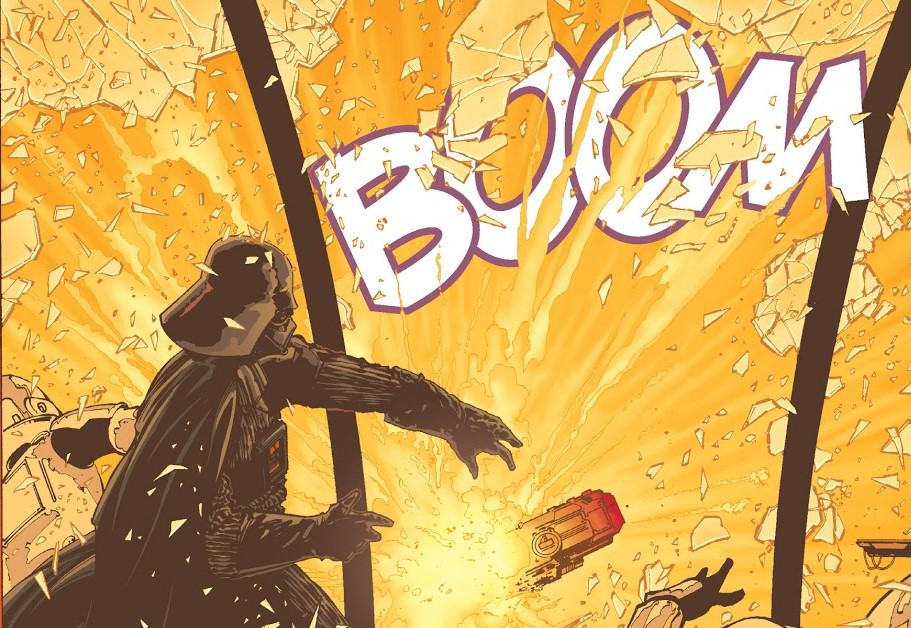 We cut to the bridge, where we’re told the damage is catastrophic, true to the luck held only by Sith Lords and Batman Darth Vader is unharmed, he apologizes for the loss of life and tells the Admiral they need to find the other ship, this one was empty, which means the other one won’t be…

We go back to the Moff triumvirate (I just made that name up, LOVE IT, running with it from here on out!) The first step of their plan (assuming Vader blowing up wasn’t step 1…) is about to occur as the Emperor heads to his shuttle and prepares for his journey to the Death Star a case of “refreshments” (didn’t know the Emperor was a party hound) is placed aboard his ship. After it’s onboard the Emperor himself walks up with his honor guard and Grand Moff Trachta himself, suddenly the Emperor pauses, halting his entire party without a word. The conspirators pause as well, holding their breath seemingly. Suddenly the Emperor’s shuttle explodes! Taking the flight crew and half a regiment of Stormtroopers with it, the Emperor turns away and leaves with his personal honor guard without a word. 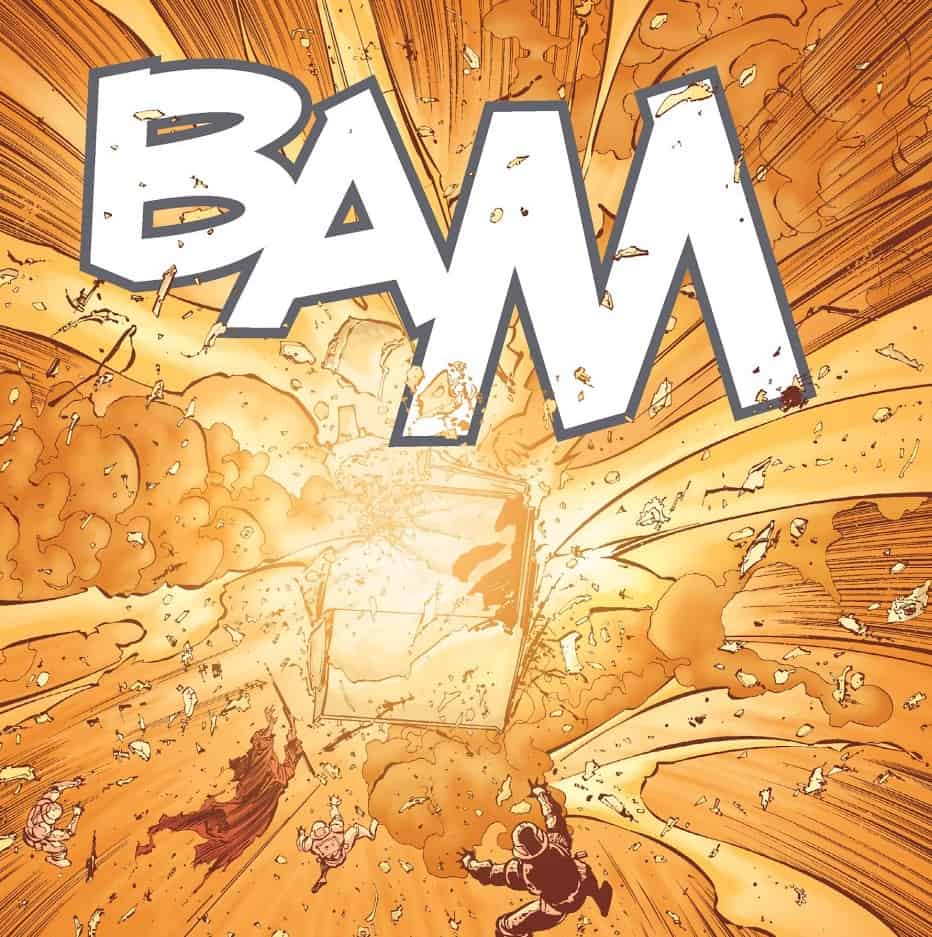 The Star Destroyer is in hot pursuit of the second rebel ship, which is preparing to make a jump to hyperspace, Vader tells the crew to hold their fire until he says, then uses the force to fire into their engines at the exact second they start to make the jump, as the ship is obliterated he calmly says to resume course for Dargulli.

The conspirators meet after their failed attempt. Trachta says now the Emperor will need more troopers, an order that will be filled with their reprogrammed troops, Bartam asks what the rest are for, Trachta tells him they are already dispatched! On Vader’s ship! 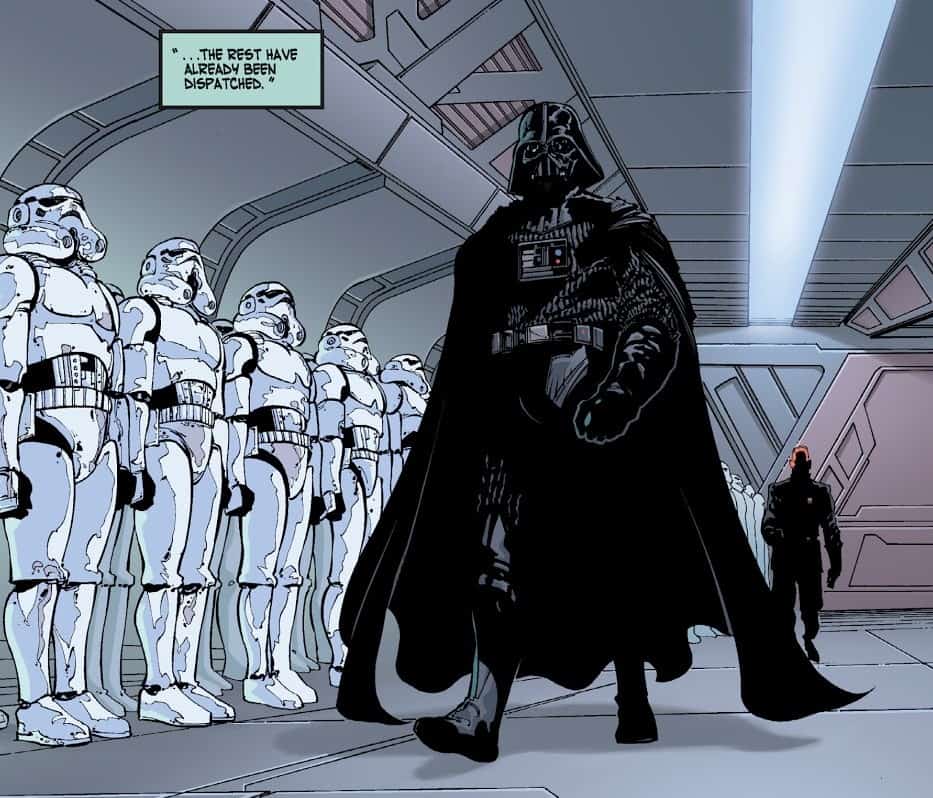 Back on Coruscant the Emperor is overseeing the introduction of his new palace guard, in the midst of the ceremony Trachta calls General Skosef to his side and tells him the bomb has been traced back to him, which alters plans a bit. On the Star Destroyer, the traitorous first officer addresses Admiral Coy in his quarters, telling him he thought he might be worth recruiting at first, but he’ll never have the guts to stand up to Vader. He guns down the Admiral, saying he doubts Vader will even notice he’s gone. 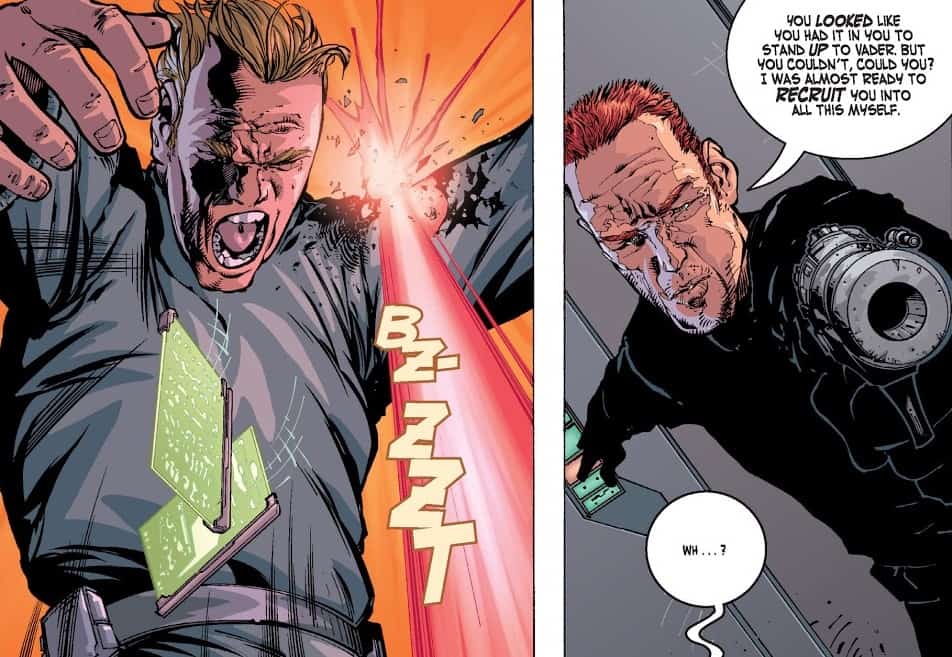 I absolutely adore the next ten pages, where the conspirators bump each other off one by one and attempt to make their move, to literally zero surprise from Palpatine, he grins as his royal guard begins to tear the regiment of Stormtroopers apart! I’m going to let you guys discover that for yourselves!

Vader’s Star Destroyer reaches Dargulli, he gives the inhabitants one chance to give up the Jedi, or wannabe Jedi, or whatever they are, they decline that chance and elect to attack him, the fight is incredible! I made you a slideshow below, enjoy. 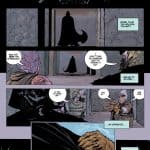 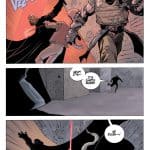 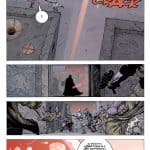 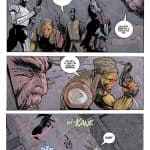 A conversation is taking place in a bar nearby, a bunch of bounty hunters is debating whether to take jobs for the rebellion, lest they are branded traitors, suddenly a man runs in and screams that Vader is down the street, the first person to take him out will definitely be rich! A certain familiar figure turns silently away and heads towards the fray… 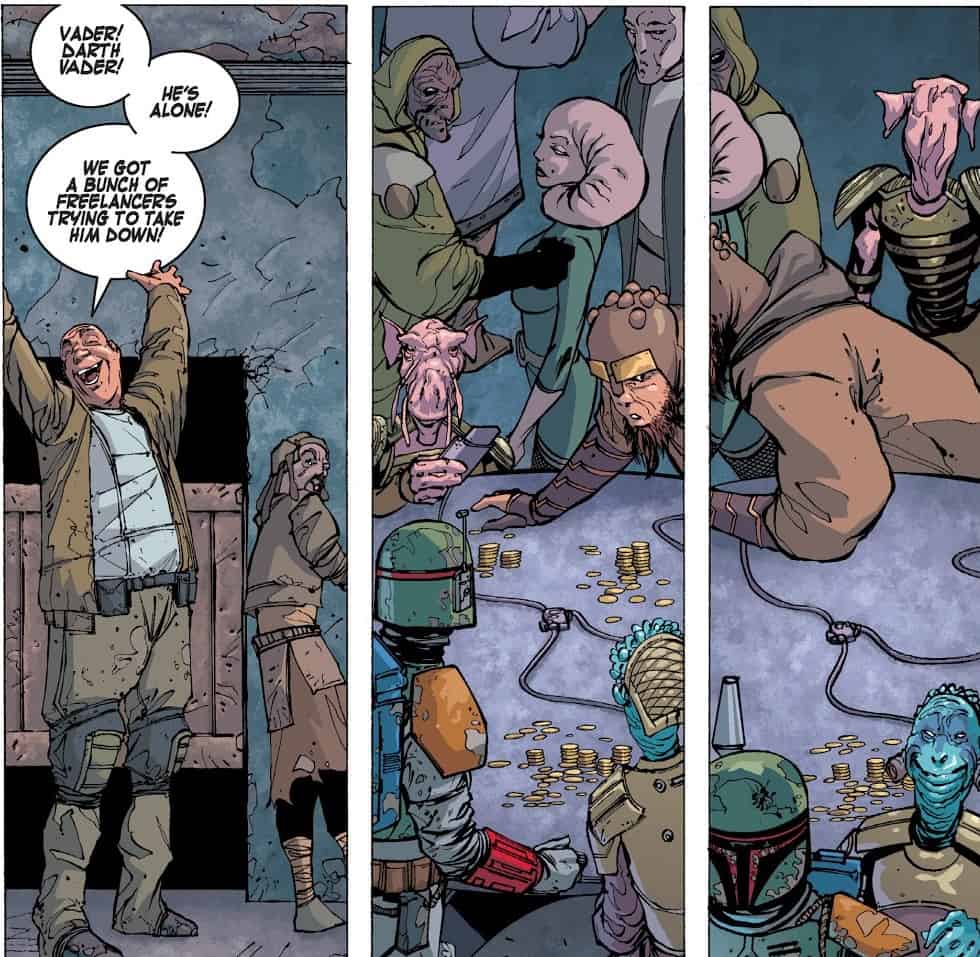 The bounty hunter gets to the fight, Vader is fighting dozens of enemies (and kicking their butts!) Boba Fett looks around, and makes a calculated decision, he starts shooting the other bounty hunters, taking Vader’s side in the team up we’ve always dreamed of! 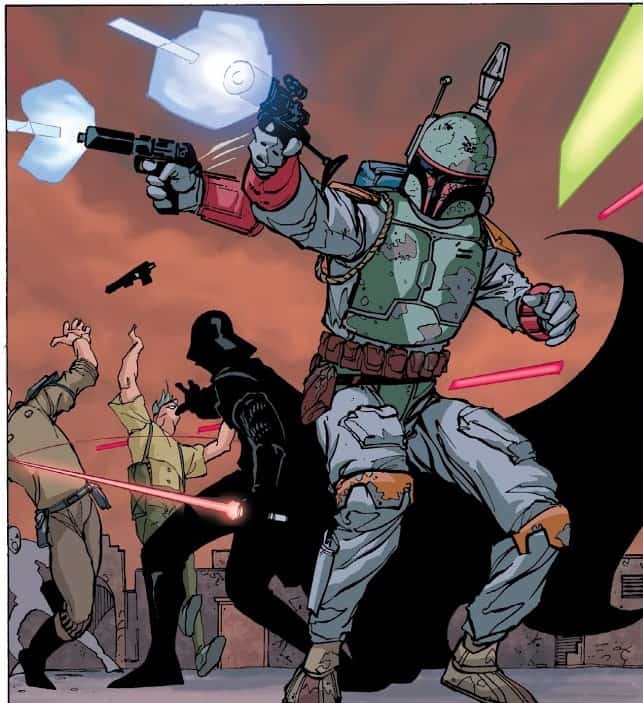 What happens next! Who survives Palpatine’s onslaught?! Do Vader and Fett become BFFs? Find out for yourself, pick up a copy of Star Wars: Empire Vol One today! (It’s seriously like 3 dollars on Amazon, or contained within the Star Wars: At War With the Empire pt 1 mini Omnibus for like 15 bucks)

I exist in a largely nonexistent subset of fans that more or less only like the Dark Horse Star Wars Universe, I watch the original trilogy sometimes, and basically nothing else, as such this arc is a favorite of mine, Marvel or Dark Horse, this whole series was pretty solid and I like the focus on the Sith, which hadn’t been overly done yet. (this book came out 2 years before Revenge of the Sith)

Likewise, the plot from within against the Sith is hilariously doomed from the start, but it’s still fun to watch them try. Palpatine’s total lack of surprise when they finally make their move is hysterical, and he annihilates the conspirators almost as an afterthought, especially after they helpfully thin their own ranks considerably and hilariously.

Vader’s final fight with the legion of bounty hunters is seriously insanely cool, and the team up with Boba Fett is out of nowhere and awesome, they exchange words at the end I left out for you guys benefit, as well as the ending.

It’s important to mention this book does contain some weirdly compelling flashbacks set within the prequels, that almost make Attack of the Clones seem like it might be worth a rewatch, (not falling for that trap again) I wouldn’t be surprised if Lucasfilm required them to acknowledge the prequels as part of the licensing agreement.

I seriously hate that this section of the EU has been retconned in an obvious political move since the owners of the property were bought out by the owners of another property, likely almost solely due to taking place during the EXACT TIME Rogue One is set.

The art does go in some strange directions at times, but it doesn’t derail me from the story, and for the most part, characters look good. Fight scenes look great, particularly when Vader and Fett team up.

If you like Star Wars, this book is far better than the masturbatory fanservice that passes for Star Wars movies these days. On the other hand, if you love those movies, you’ll probably still like it, it’s a great book on its own merit despite not being part of continuity.

If anyone ever wants to contact me, look me up in my group for the love of comic books , I also have several comic pages dedicated to my various true loves, Batman, Spider-man, Marvel, Oldie Goldies, and Hats! (Long story on that last one haha) or on Twitter @johnbatusijack