Static: Season One #3: Snitches Get Stitches 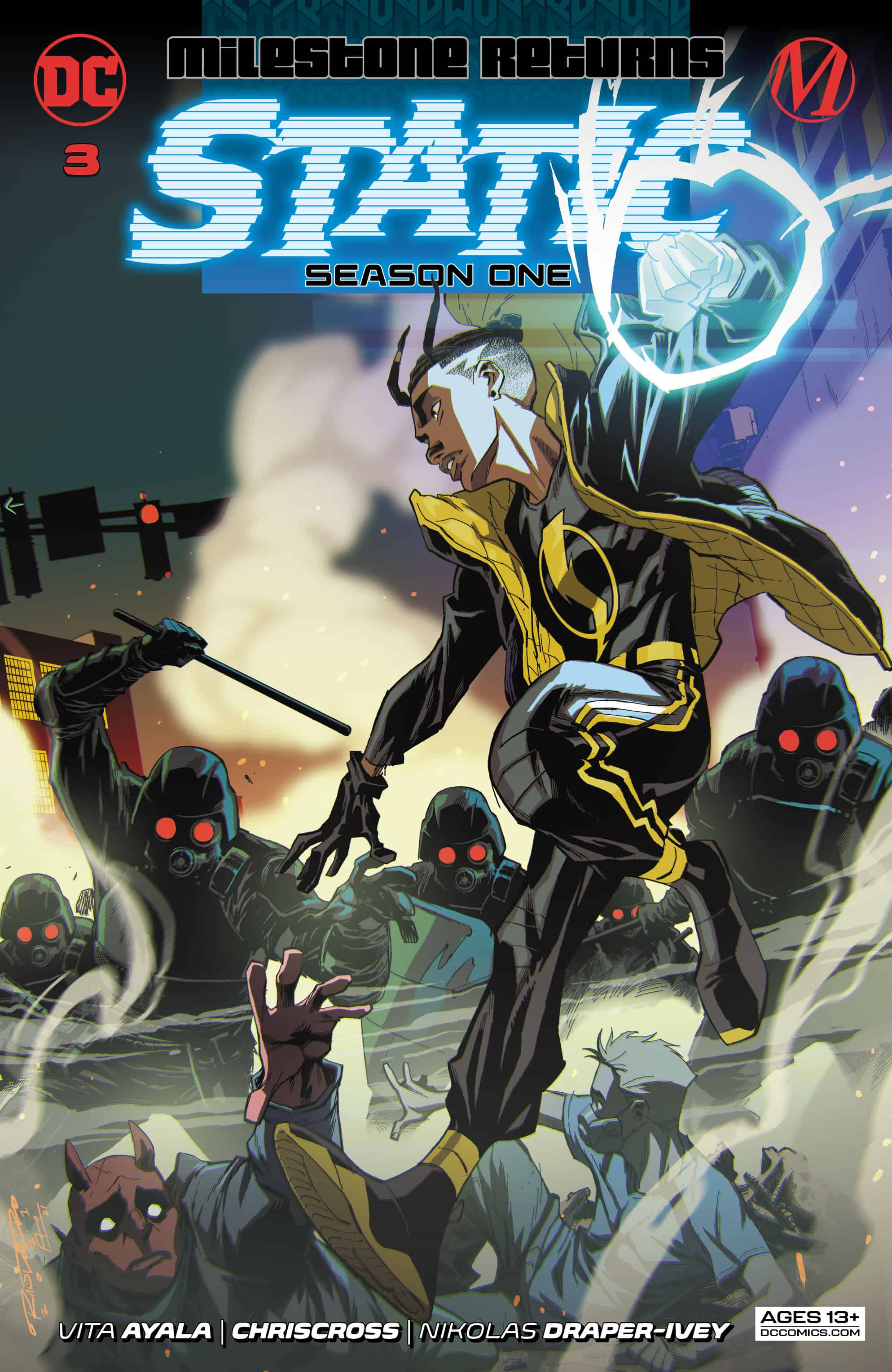 After making his way to Hardware’s lab, Virgil has to contend with a small force of police that believe he’s the tech-based hero. Can he manage to avoid serious danger and injury with the use of his electrical abilities? And what other looming threats are waiting in the wings for him?

This issue was a bit more mellow than the first few and sometimes a break is good. 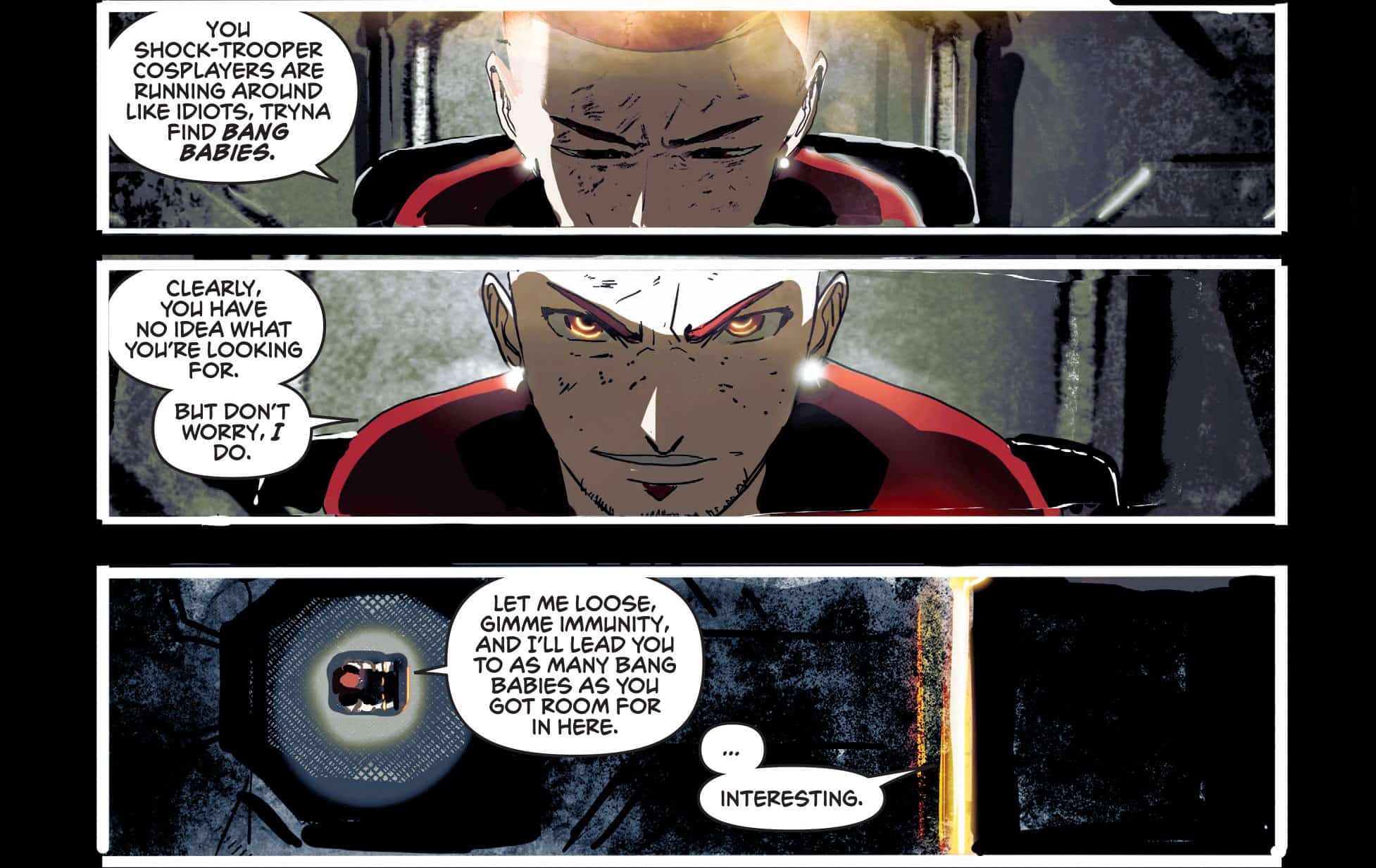 While this issue does have a small bit of action, it seeks to move along some of the more character driven aspects of the story to great effect. Vita Ayala is really great at making everyone a different kind of charming. Virgil’s dad, Robert, is a loving and caring man who seems to be a jack of all trades. He taught Virgil small technical skills and fighting abilities and offers the same sagely advice that all hero mentors do, giving Virgil the confidence to become something greater for the benefit of all of Dakota. Frieda and Richie are simply the best friends Virgil can have and seem to be the main crutches that Virgil’s going to lean on throughout the series, much like they were in the original series as well.

However, the real leap in characterization comes from two of the least expected characters: Hotstreak and Darius. Seemingly invoking the recent trial of garbage rapper, Takeshi 69, Hotstreak is taken into federal custody and makes a deal to walk in exchange for the names of other known Bang-Babies. This further turns him into a despicable character, especially as he is dressed in a suit and tie as he rats out his classmates. Darius on the other hand, while obnoxious in his interactions with Virgil, is still doing whatever he can to help the misunderstood Bang-Babies. His podcast addresses the negative press these people are getting, so much so that Daisy Watkins comes to him about the powers that she began expressing last issue instead of Virgil who was next to her in the protest. 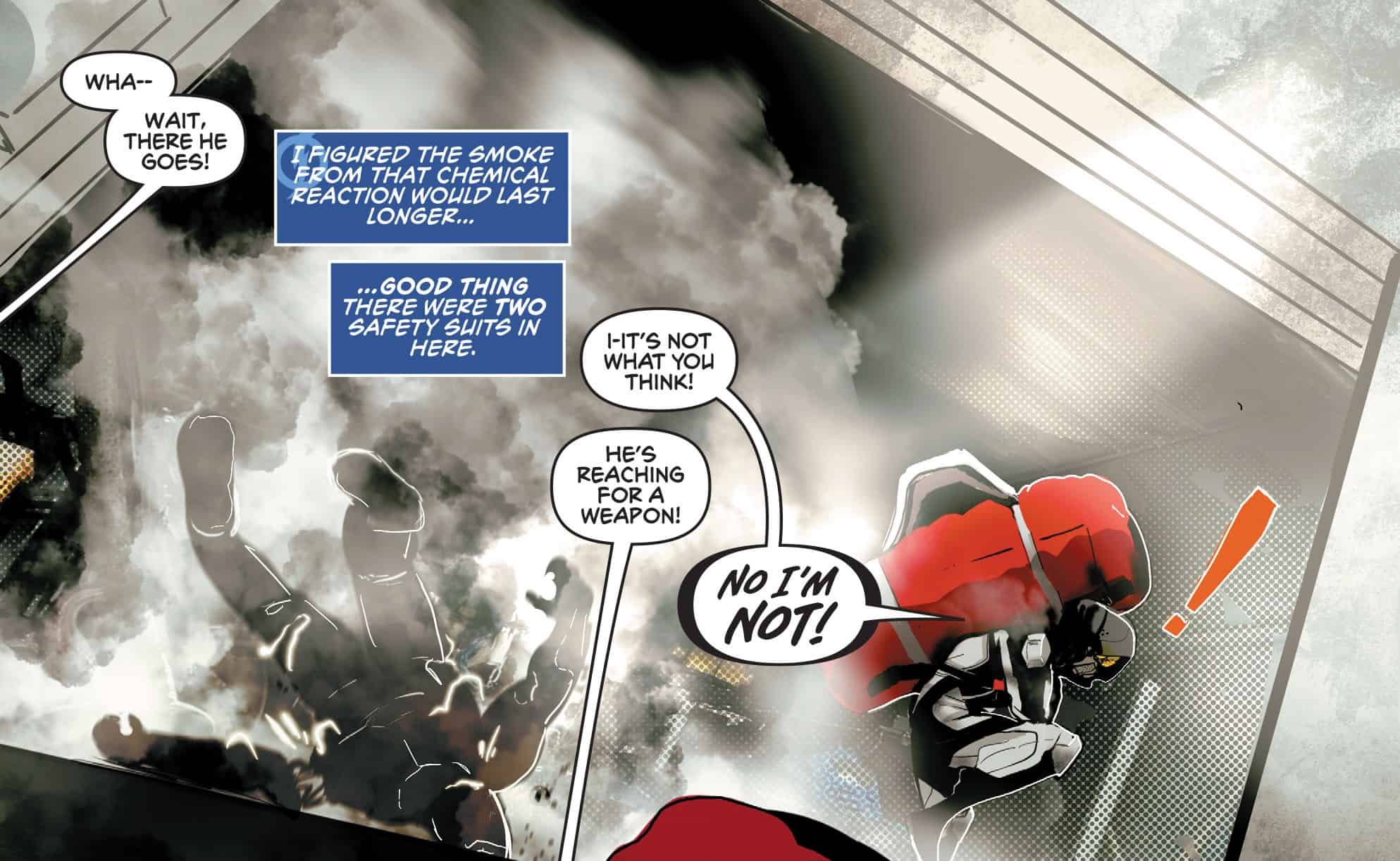 This shows that Ayala understands that not everything has to be completely centered on Virgil and allows for Dakota to become its own living, breathing entity with stories going on outside of his superhero adventures. It’s good world building and shows that Bang-Babies aren’t a monolith and that even worms like Hotstreak will find ways to come out on top. However, worms get crushed under the feet of giants, one of which seems to be Holocaust as his shadow grows ever larger with each passing issue.

Nikolas Draper-Ivey and ChrisCross, with Will Quintana on colors, divide up the art duties in this issue and work in tandem to keep the feel and tone of the book consistent.

Draper-Ivey takes the first half of the book and explores Virgil getting used to the gear that Hardware gifted him and exploring other uses of his powers. It was a fun romp that allowed Draper-Ivey to use a little bit of quirkiness alongside what was a very tense stand off with the police. He has a very kinetic style as he shows that Virgil has the ability to use a magnetic field to stop bullets and then later hops over cars and uses a sewer lid to fly, showing that Virgil has only scratched the surface of what he’s capable of. 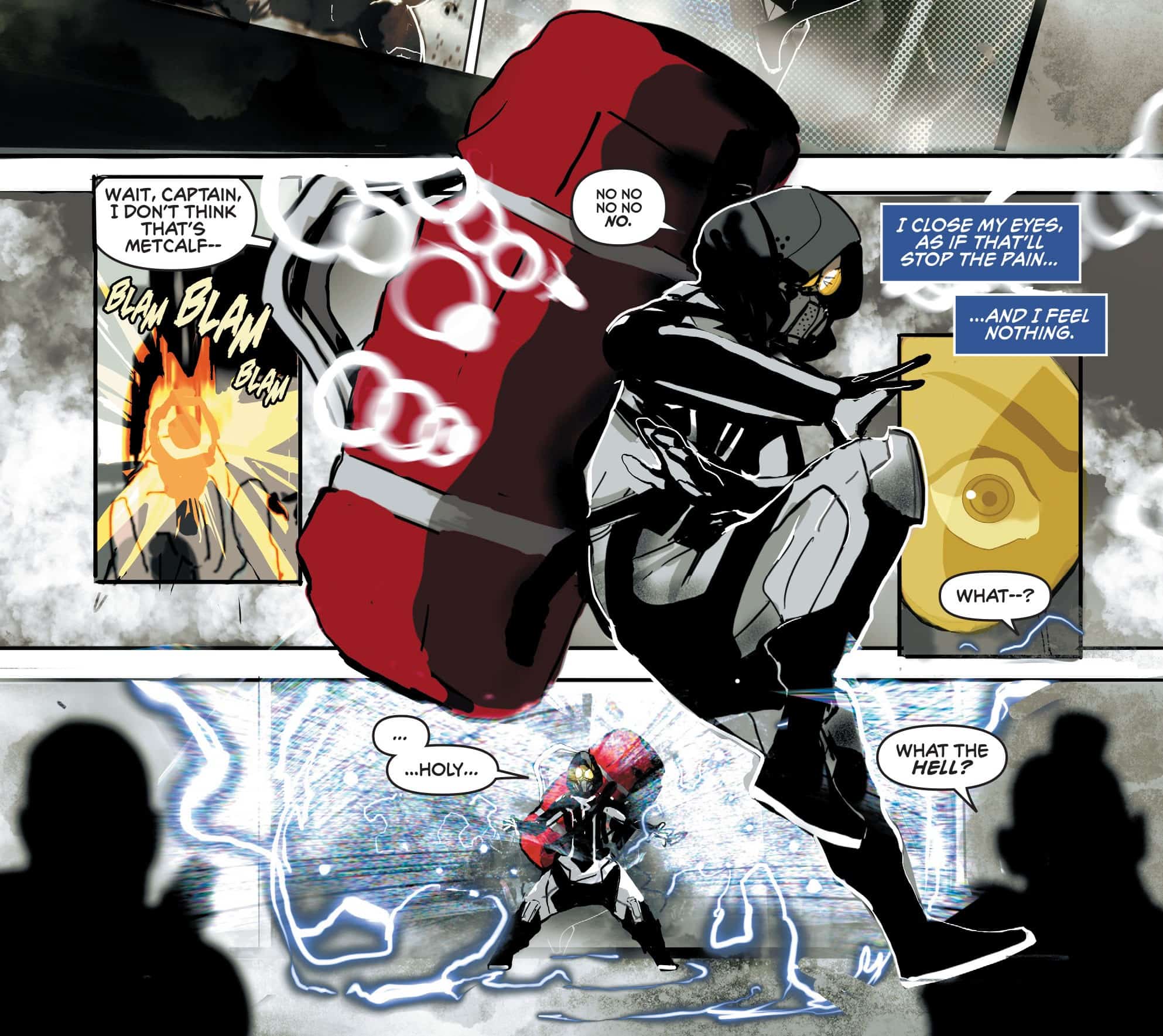 My favorite scene in the book however, was the montage of Virgil finally putting together his suit and using a makeshift one from a few materials in Hardware’s hideout. It was a cool moment that showed a little bit of Virgil’s happy childhood and how his sister taught him to sew. There’s even a small shot of child Virgil doing a Henshin-esque transformation pose from old anime he used to watch and that kinda made me misty eyed from my childhood. Draper-Ivey gives Virgil a natural smile, the kind you get when you’re reminiscing over an old memory and shows that Virgil makes use of every lesson he’s taught. The final shot of Virgil wearing an updated version of his original costume with the X Hat was amazing to see.

When ChrisCross takes over, the scenes are slowed down in terms of action, but feel a lot more grounded in comparison. ChrisCross seems to have a particular knack for facial expression and body positioning. In the scene where he finally talks to his father after storming off in the last issue, he looks down initially, like he’s disappointed his dad, but the old man gives him a smile and pats him on the head, showing that he’s not afraid to be an affectionate father. It’s warm and gives Virgil some much needed reassurance of what he’s doing. And later on when he reconciles with Richie and Frieda, everything is laughs and smiles and fist bumps like a bunch of geeky teenagers. 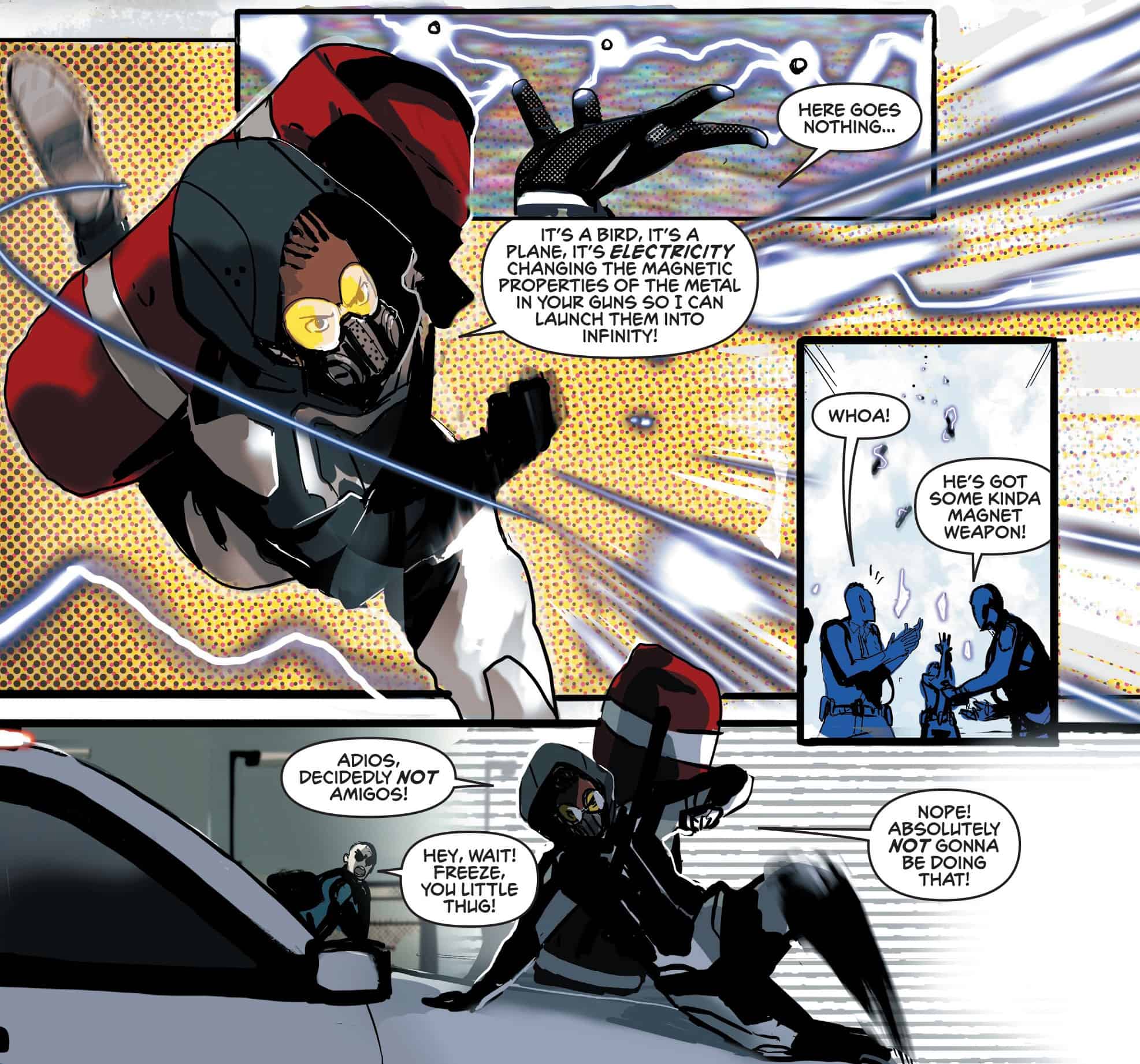 The coloring in this issue continues to be bombastic. From Draper-Ivey’s stylish colors that make the lightning feel like they’re coming off the page with vibrant blues and whites to the pop art style that he makes use of when Daisy shows off her powers in a dazzle of bright purple in a rainbow background, everything feels amazingly different page to page. Even with Will Quintana’s more non-saturated colors, things get a very natural feel, even if the backgrounds initially feel very overpowering with a bright and irritating glow of white. The glow from the inside of the house, being a warm afternoon orange, shows the brightness of the rekindled friendship between Virgil and the gang.

Vita Ayala, Nikolas Draper-Ivey, ChrisCross, Will Quintana and AndWorld Design continue to build on to the world of Dakota through Static. The series is gripping, entertaining and absolutely fantastic in every avenue so far and I can't wait to see how far they can go from here!

Static: Season One #3: Snitches Get Stitches