Stillwater #12: The Revolution will be Immortalized 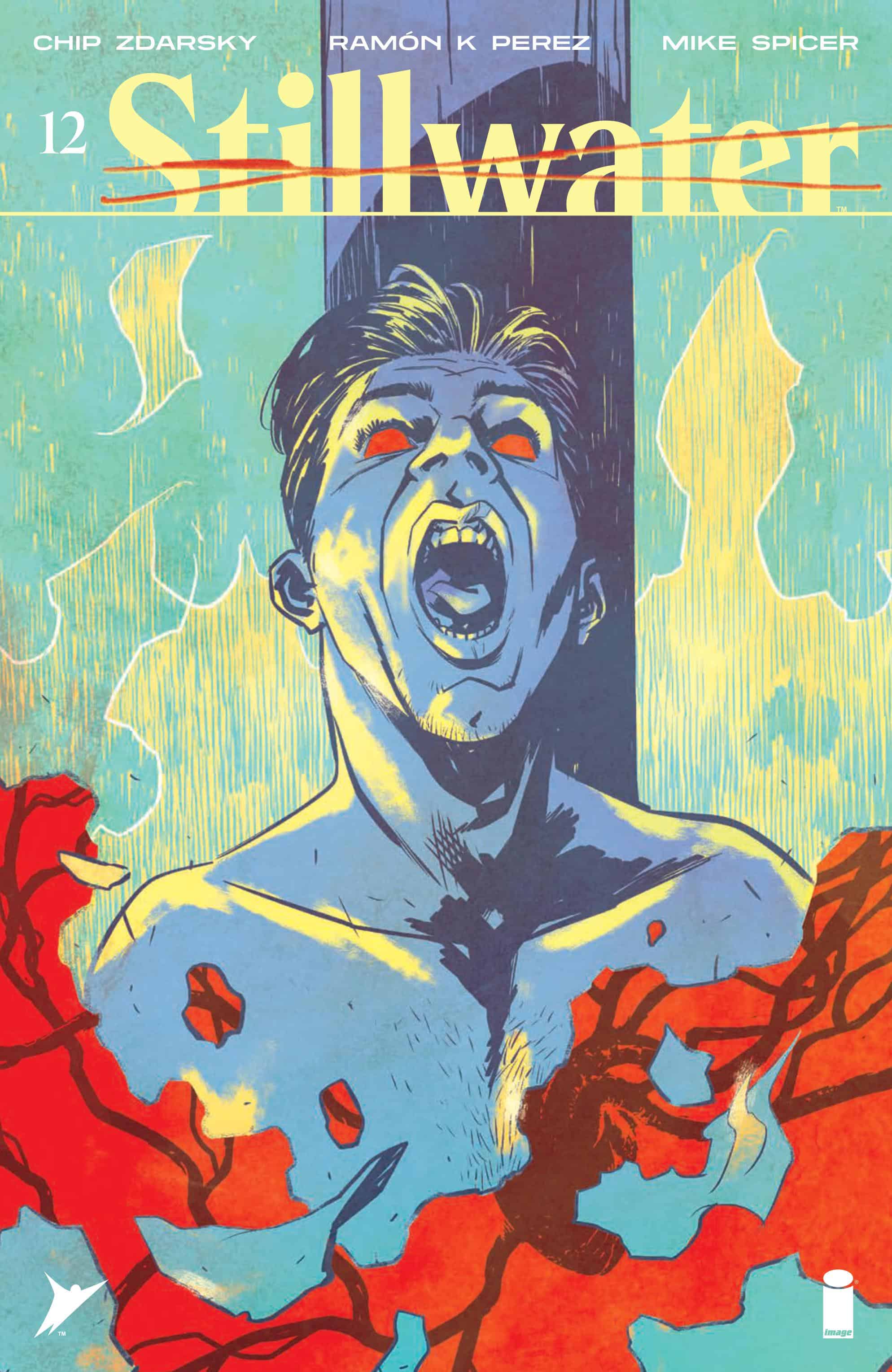 Ted and the Marines. Galen and the children. Caught in the middle, is Daniel prepared to die? Can he?

It’s a little sad that George Lucas’ quote about the structure of Star Wars has become such a joke. The idea of a story being “like poetry, it rhymes” is a novel concept that feels like the watermark of a master craftsman, mirroring the natural rhythm of a story without it feeling like it’s just a boring reuse of narrative beats. A work that employs that internal rhythm of plot, character, or theme feels plotted with a strong trajectory. Stillwater #12 written by Chip Zdarsky with art from Ramón K. Pérez, colors by Matt Spicer, and lettering from Rus Wooton, is a book that interjects that internal rhyme scheme with its strong, economical storytelling and art.

Issue #12 picks up on a spark that was lit in a previous arc, that has reached the end of its fuse, and the quiet town of Stillwater explodes into the chaos of revolution. Zdarsky’s script moves at a hurried pace, jumping from the calm before the storm in terms of Daniel, Laura, and a stall crew planning a surgical plan to free the town from Galen and the marine’s control. It’s a tense table-setting scene that knows to keep the pace hurried, choosing efficiency over lingering dialogue or drawn-out story beats.

It’s an excellent choice on Zdarsky’s part, as it lays the groundwork for the back half of the book, and flows perfectly into the split action of Daniel attacking the leader of the marines while Laura leads the attack on Galen the child, and City Hall. The parallel structure that Zdarksy’s script employs in the latter half of the book ensures that the book works as a page-turner, while actions taken in one plotline influences the other. The last few pages sync back up and decisions made in the two plotlines again upturn the status quo of the series.

Pérez is a perfect creative partner for Zdarsky, rendering visceral and weighty violence that otherwise would feel hollow due to the immortal premise of the series. The same grotesqueness that Pérez employs to reveal character in his art makes the violence used in the book feel meaningful like there is a real consequence of every wound inflicted, even if the damage generally repairs itself within the borders of the town. Pérez’s pencils are harsh and complex in a simplistic style, working with fairly conventional panel compositions to bolster the economic storytelling of the issue.

The composition of the panels feels like a formalist approach to telling a split narrative, mirroring Daniel and Laura’s attacks on the various deep-rooted institutions of Stillwater. The beats mirror each other both in the two respective storylines, but with one another as well. Pérez doesn’t break into complex or loose panel structures but keeps all of the action and violence focused in the frame. It’s an effective technique that keeps the reader’s eyes on the violence and forces the issue to keep moving forward as that action progresses.

Pérez’s art paired with Spicer’s colors is a match made in heaven, with the color emphasizing aspects of the action like the spray of blood or the intensity of flames that can burn a human body. Again, there’s a strong sense of technique employed in a restrained palette of color, only pooping in those occasional moments of violence. There’s something oddly compelling in the way that Spicer brings color to the flames that burn a person alive or the burst of light from the muzzle flash of an assault weapon firing. Spicer knows how to guide the eye in Pérez’s wonderfully composed frames, using the limited colors to make what’s important truly stand out.

With issue #12, Stillwater continues to be one of the most formalistic but innovative comics in Image’s line-up. There’s something about the simplicity on the surface of the book that draws a reader in and reveals a much deeper reflection of time, immortality, and the testing of human nature when forced to weather the stillness of longevity. The team employs that simplicity and turns it into economic storytelling, utilizing every panel, word, and color to highlight just how much has changed in Stillwater, and the weight of violence in an invulnerable society.

Stillwater #12: The Revolution will be Immortalized