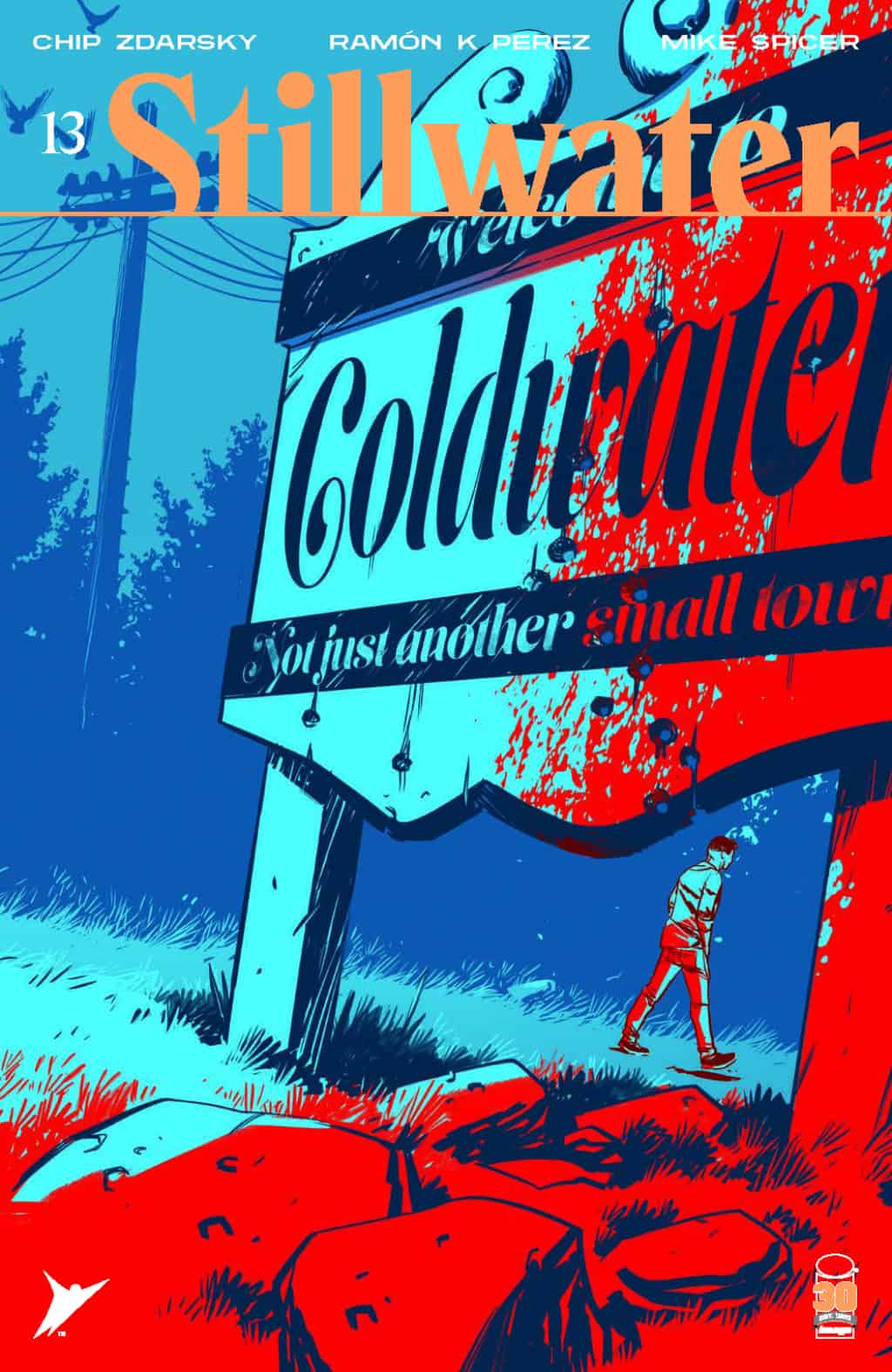 Daniel now holds a special place in Stillwater. Can Galen’s hold on the town stand up to a new challenger?

The dichotomy of abstract and concrete is the fine line to walk for art. Moving too far into the abstract turns the work into a textbook or philosophical thesis while operating wholly in the concrete results in a technical manual. The best stories will weave the two together and allow them to feed into one another, using the concrete to give stakes and anchor points to the more abstract concepts. A series like Stillwater deftly handles both ends of the spectrum and grounds its examination of immortality through the cyclical violence that humans are willing to inflict on one another, and how the mind fractures because of that. From the way characters talk, are rendered and emote, and take action, that abstract core is pushing and pulling the characters, and by extension the world around them.

Stillwater #13, written by Chip Zdarsky, art from Ramón K. Pérez, colors by Mike Spicer, and letters from Rus Wooton, picks up from its last issue’s cliffhanger as Daniel survives being burned alive on the outside of Stillwater’s border. He rises and fights his way from his would-be murderers as his mother and the small resistance group also fight their way from city hall. Daniel gets to survive as the town begins to see him as a miracle stacked on another miracle. The back half of the issue deals with the fallout of the map changes and the failed attempt to overthrow Galen and the other children. The end of the story promises another zag, and a clear expansion of this miracle town thanks to the revelations of the last two issues. With the knowledge this is the last arc for the series, the endgame has come into focus, and the scale of the world is about to expand further than seen before in the series.

Zdarsky’s script starts to dig into rich thematic content in this last arc, with a burgeoning religious angle and the speculative discussions of cartography. The book has played with the horrific implications of immortality in its first two arcs, and Zdarsky has proven himself more than capable to handle these abstract concepts while still rooting them in character and story. The fact that the child antagonists revealed themselves through the course of the story and were molded by the supposed miracle of Stillwater is not lost this far in. It’s a resonant case of cause and effect, and Zdarsky willingly jumps into those what-if questions without hesitation to tell the best story possible. The only thing that is left to be desired from the series is more explorations of those themes and fallout in the town. Hopefully, the series will get another one-shot or tales from Stillwater in the future.

Combining Zdarsky’s excellent script with Pérez’s twisted and grotesque art is a visually rich story. The way Pérez renders anatomy reveals the disturbing and the macabre, mostly because it flirts with style while still delivering those disgusting images. It’s the artist’s equivalent of taking those abstract concepts like immortality and playing with the real-life implications. Seeing Pérez’s pencils working in tandem with Spicer’s colors to render the physical harm repeatedly done to people’s bodies is refreshingly twisted. The standout example of this is Daniel coming from having his entire body burned. Daniel’s figure is the opening image of the issue, and it’s more wax statue, and less a man’s figure. Pérez’s pencils blur the line between regular human features and an unrecognizable mangled corpse. The dichotomy of the issue, and by extension, the series is on full display in that single image.

Stillwater #13 balances the abstract and concrete in both its writing and art, bringing the concepts of immortality, theology, and borders on a map to play out in the lives of townsfolk whether they believe in them or not. Zdarsky, Pérez, and Spicer come out swinging in this issue, and tackle those bigger questions with stunning writing and grotesque art. Whether it's the revelation that maps can be changed, or that immortality will only lead to pain and suffering, the thematic tapestry of Stillwater is an enthralling thought experiment brought to the page.