Stillwater #14: Next Town Over 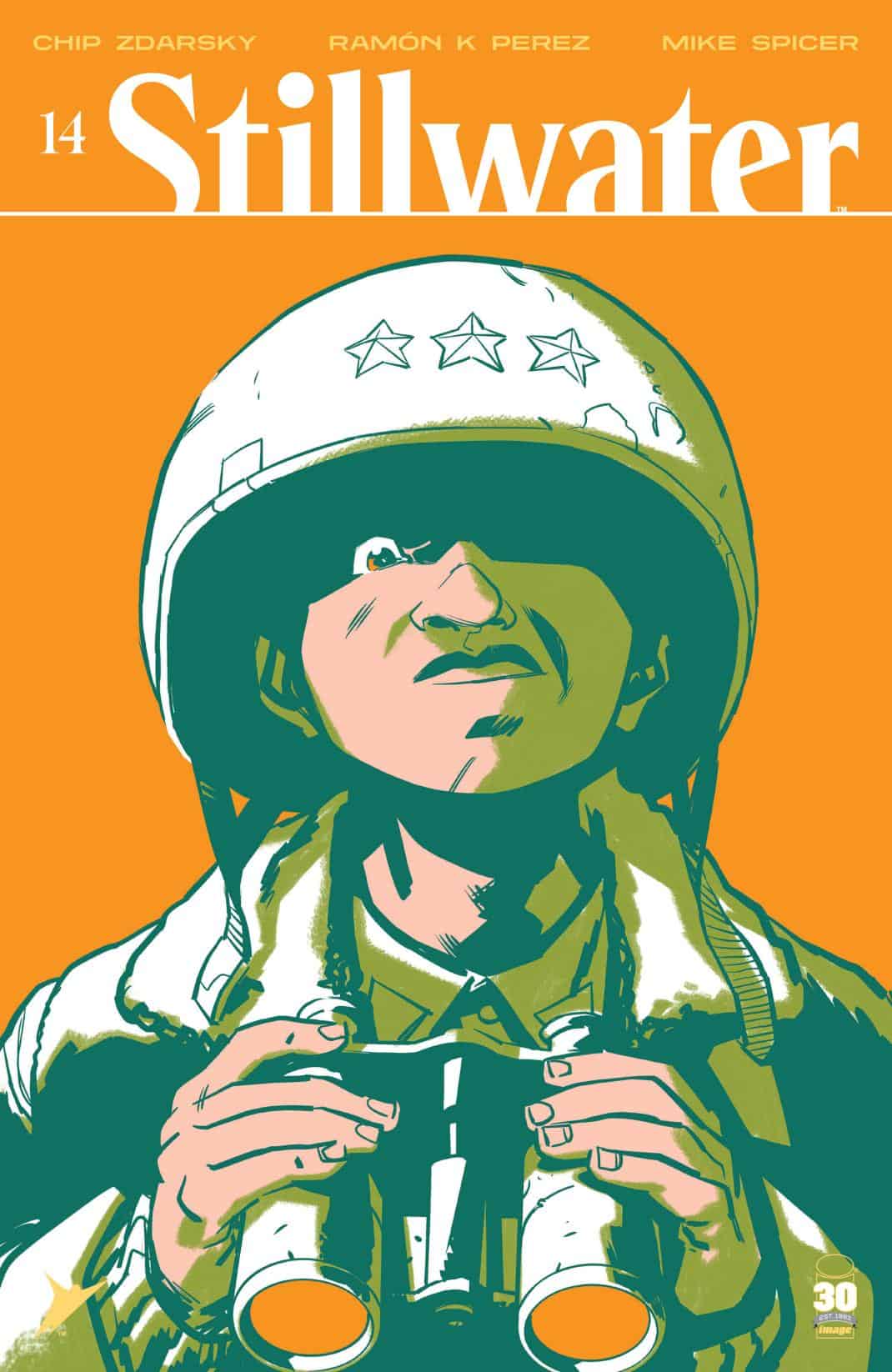 Stillwater is unique. Stillwater is immortal. But miracles can happen more than once. Will the town be able to accept that?

Stillwater #14 – scripted by Chip Zdarsky, with art by Ramón K. Pérez, colors from Mike Spicer, and letters by Rus Wooton – opens on Galen’s military-inspired operation to expand the border of the Stillness. He and the Marines retrofit a humvee with an EMP that shuts down the town’s modern electronics so that Coldwater (the town seen in the special one-shot issue) becomes locked in the same timeless status as Stillwater. After the plan works, the issue unfolds as Galen proves to the residents of Coldwater they are now immortal and invulnerable and explains the conditions they’ll have to live with. From there, the issue rounds out its plot with the fallout of the choice and, finally, the return of the Three.

Zdarsky’s script makes a smart decision to hold the reveal of The Three (Daniel, his mom, and Tanya) until the last page, giving a sense of scope and time passing across a series based on the concept of immortality. The choice to give the trio a messianic look, one that’s a cross between cult leaders and zen figures, in which they’re literally bathed in light with on-lookers crying in reverence. In a series dealing with immortality, Zdarsky has figured out a fascinating way to imbue that sense of timelessness into his plots. This issue, in particular, moves at a slow pace, but that doesn’t mean it is uninteresting or dull. The characters and concepts extend themselves to a slower pace, thanks to the examination of the tortuous reality of never aging or changing.

The most propulsive action of the issue is when Galen enacts his plan, and the Stillness absorbs Coldwater. The town is forced to reckon with immortality like the citizens of Stillwater had to but on an accelerated timeline. The way Zdarsky frames the issues with an objection to immortality is brilliant, calling back to the one-shot where Galen and Mrs. Wilton – the waitress of a diner in Coldwater – talk over burgers. The conversation is an excellent callback to the issue, which prompts a reread of the special and deepens the lore and thematic resonance of the series. It’s a short scene but holds more weight than any moment in the issue, thanks to the foundational work dealing with the notion of worth in relation to time and need. It also serves to indicate just how far Galen has shifted throughout his extended life, twisted not only by the passage of time paired with his torment of being stuck in a child’s body. It’s the grotesque realization that Galen can no longer enjoy the little things in life, and he’s doomed another group of people to the same fate.

Pérez gets to shine in his grotesque art and expressions; the standout sequence is watching the Coldwater police shooting the Marines from Stillwater. There are a couple of panels where the actual shootings occur, but they quickly become inconsequential as the Coldwater townsfolk express horror at their new reality. The faces and reaction panels Perez illustrates sells the spectrum of emotions in the Coldwater folks. Paired with Spicer’s strong color palette that gives bright flashes of yellow and oranges, contrasting with the idyllic greens and blues of small town Americana.

As Stillwater gets to enjoy a finite time that its characters do not, its themes solidify and proves it can still deliver some unexpected twists. Zdarsky's deep character work and steady pace paired with Pérez’s eerie expressions and callous action reinforce the horror of immortality. With the series working through its final arc, the secrets of the Stillness are surely coming to a head just as Daniel returns to Stillwater for a second time, threatening plenty of carnage and chaos to come.

Stillwater #14: Next Town Over