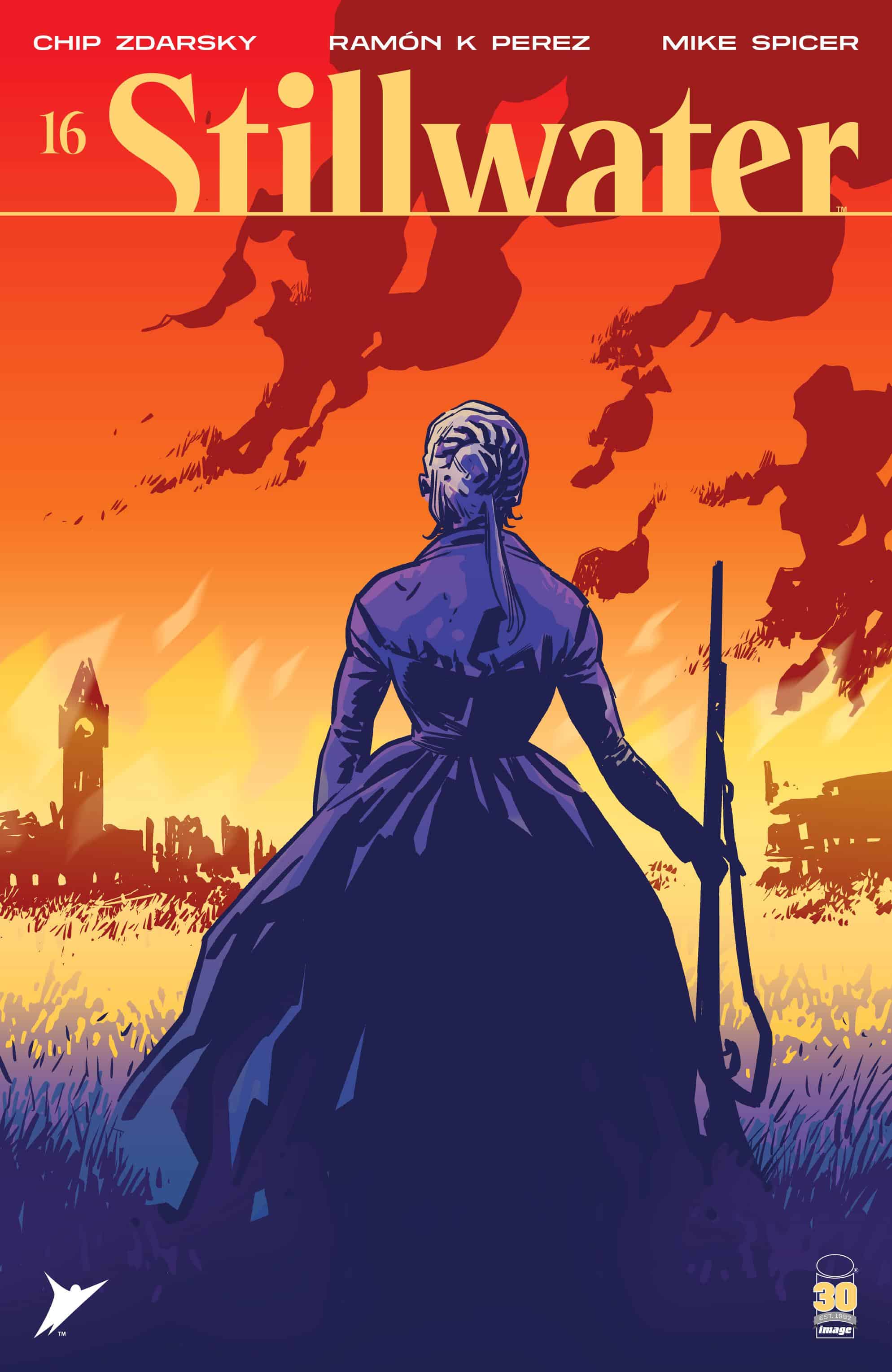 The secret of the curse revealed!

There’s something about fiction set during and around the Civil War that creates a unique tone. It might be thanks to the era’s bookending to the mythic quality of the Wild West, but preceding to the “modern” age that comes with the early 20th century. A work succeeds in using the era as a setting when it captures the tragic but slightly mythic setting while ensuring it avoids romanticizing the period.

Stillwater #16 – written by Chip Zdarsky with art by Ramón K. Pérez, colors from Mike Spicer, and letters by Rus Wooton – mostly diverts from the ongoing story in Stillwater and Coldwater to reveal the origin of the towns’ immortality. In 1842, Clara Sheridan gives birth to triplets, but only two survived, who grew up into the Civil War. One son goes off to fight, while the other stays home as Clara offers to draw maps for the Union army. The war comes to Stillwater, and Clara loses another son, and in a moment of weakness, evokes her stillborn child’s name. A specter appears and offers her a chance to stop the suffering of her remaining son, and creates the curse of immortality that infects the town. Clara finishes her map of Stillwater using her blood, and the border for immortality is set.

Clara is deemed a witch for this and is buried alive as the soldiers are trapped in an endless cycle of violence. As Clara is buried, she watches as her last son is stabbed, and once she is underground, dies. It takes 120 years for Clara to claw her way out, bringing immortality with her. This occurs in 1985, and history repeats itself, with the town once again losing its ability to die. This leads into the present day, and Galen gets wind that someone has died in the borders of the town, adding an accelerant to the last few issues of the series as he plans to kill Daniel, Laura, and now Clara as well.

Zdarsky’s script for this issue brings a tragic edge to the series, with the flashback to the Civil War era adding a layer of pathos. This is thanks to Clara’s narration, which has a remorseful tone that speaks to the diction and tone of the era combined with Wooton’s lettering. The extended flashback and its lettering choices give the feeling of old letters collected from the time, which speak to that wistful and fearful tone of a parent hoping a loved one will survive the war.

Much of the series to this point has been predicated on the horror of immortality and the stagnation it creates. Here, Zdarsky subverts this by showcasing the terror that comes with mortality and the pain it can inflict. It’s an excellent reversal of the themes of the series and creates a question of which is worse, the mortal coil or the endless cycle.

Pérez’s art gets to play in that new space as well, moving away from the elevated body horror of the previous issue to showcase a more subdued style. The expressions are less grotesque in the flashback scenes, and the acts of violence don’t reach the twisted levels of gore and viscera seen previously. Instead, the tension and horror come from the internal and emotional damage, as Clara is destroyed by each son taken from her. Pérez uses more close-ups and reaction shots to frame these moments, giving insight into the harrowing acts committed. Towards the middle of the issue, Pérez lets loose the most chilling series of panels in the sequence.

Clara is being buried alive, and Pérez lays out three vertical panels that show just Clara’s eye, then the vision of her having been stabbed, and finally darkness as she’s buried. It’s an effective bottom third of the page that exemplifies the power of the restrained art of the issue. Pérez could have shown more of Clara’s buried body or more of her son’s murder, but the condensed layout of the issue creates a striking sequence that moves quickly right before she becomes trapped in the ground for what seems like an eternity. The next page switches to an overhead shot of the battlefield and the aftermath of the murder before going to utter black once again. It’s an excellent contrast of those images on the page, using the red backdrop of the conflict to clash with the blacks of the dirt encasing Clara.

Spicer’s colors add to the shifted tone, working with a much more muted palette that feels in line with the Civil War era. Gone is the soft but warm Americana color scheme, replaced by muddy browns and grayish blue of Union soldier uniforms. That choice in palette gives the issue a sense of history, working with Zdarsky’s captions and Wooton’s coloring to cement the tone and emotion of the times. Shades of the typical coloring come into play once the war reaches Stillwater with blood, fire, and carnage infecting the calmer town.

Spicer’s colors are strongest in the burial sequence, contrasting the endless blackness of Clara’s perspective with the bloody violence of the soldiers topside, creating a coloring dynamic that speaks to the dichotomy created by Zdarsky’s script. The red signals the reality of mortality, as time is allowed to pass even if it’s cut short while the inky black signals the burden of immortality, an endless expanse of darkness that can never truly end.

Stillwater #16 is a flashback issue done right, taking the opportunity to reveal the origin of the town’s immortality and shifting the book’s sensibilities to match the time. Zdarsky’s script and narration from Clara channel the tone of letters from the Civil War, capturing a longing and sense of tragedy for the loss of sons. On the art’s side, Pérez’s linework pulls back the grotesque to play in a more subtle style that speaks to Clara’s tragedy. Those elements are reinforced by Spicer’s muted palette and Wooton’s lettering choices for the narrations, creating a new aesthetic for the issue that feels both in line and innovative for the title.