Strange #5: A Knight On the Town With Doctor Stranger 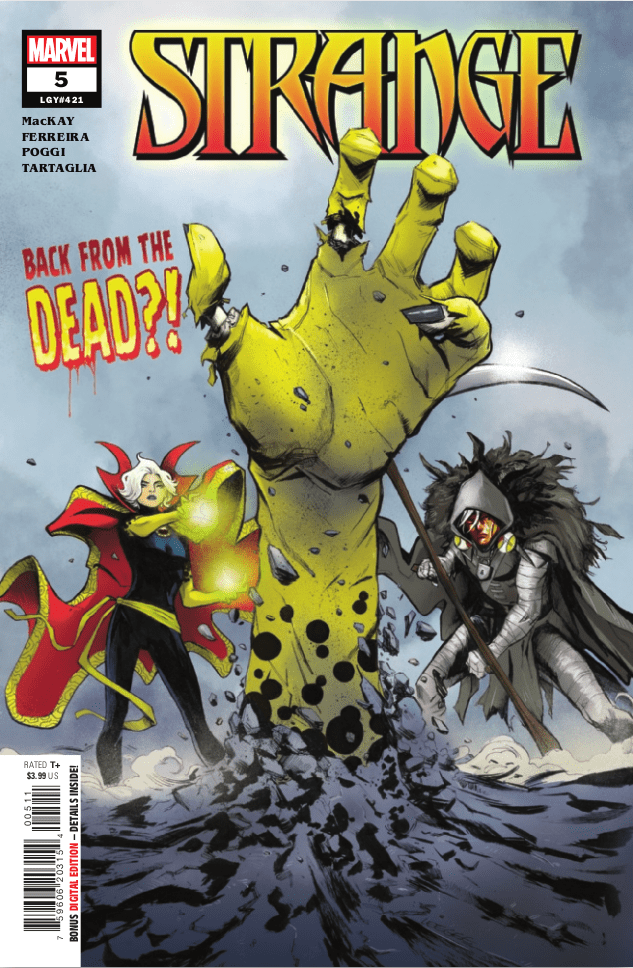 When Clea entertains her mother Umar The Unrelenting, there is only one thing to offer as dessert to a fellow Warlord. Cannon fodder in the form of the Blasphemy Cartel. As she herself dispatches the undead Shadow Knight her mother polishes off the magical soldiers. And after another tête-à-tête with the Harvestman she decides to interview others who have made the difficult transition back from the afterlife. It’s only while literally painting the town red with Moon Knight something he says triggers an epiphany and she realises the identity of the Harvestman was under her nose all along. 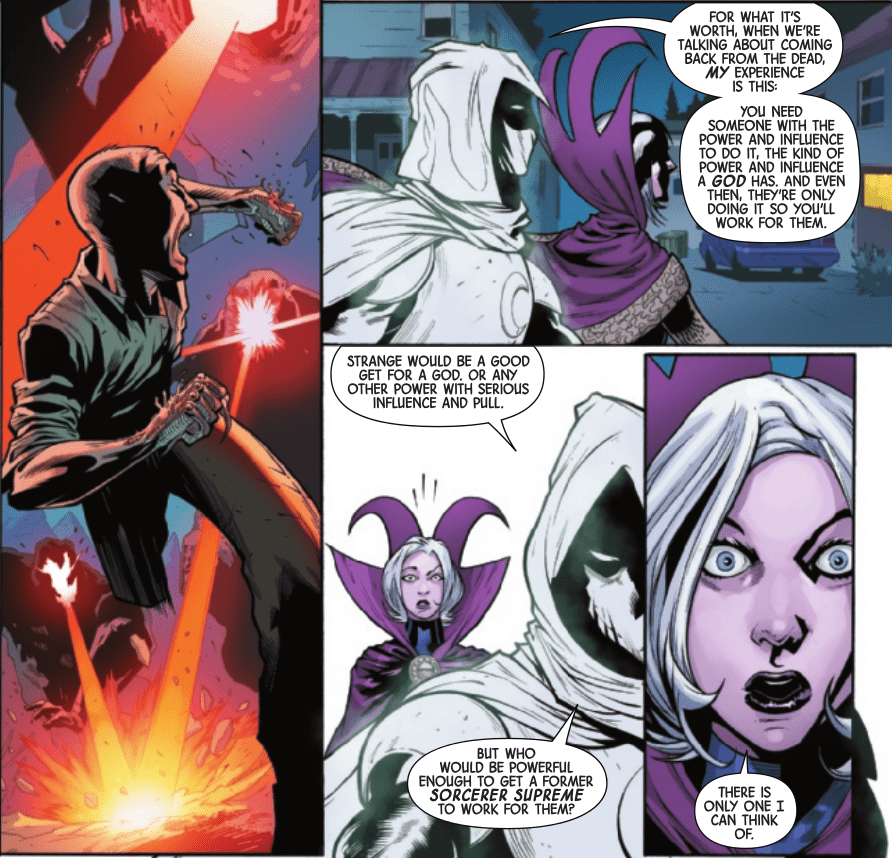 It was only when Clea’s mother sees her with Harvestman and comments on her taste in men that it suddenly dawned on me who he was. And I immediately stopped and looked back, re-reading from the start of the issue and the inkling became a certainty. And I guess in hindsight there were clues in previous issues all along. In almost every encounter with him we see trigger words or loaded statements, virtually screaming the answer. Such as the final pages of Strange #1 where she seems to sense the arrival of Strange himself and calls out “Stephen” and the Harvestman appears. DOH!!! And I can’t believe I didn’t pick up on it. Right up until Umar spoke of him and I had that Sixth Sense bomb drop and almost heard Haley Joel whisper “I see dead people”. 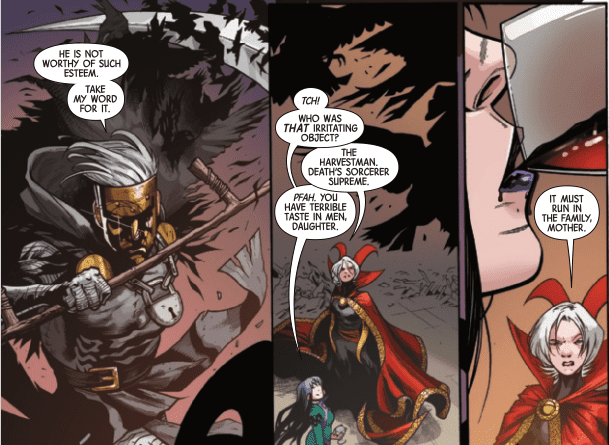 Even then I almost hoped we would have to wait at least another issue before finding out who it was for sure. But at least now we can see the glimmer of hope that she will find a way. And if the progression Jed MacKay has given her in this book is anything to go by it’s going to be a rip roaring adventure. So far we have seen Clea really come out of her shell and of the shadow of her former teacher. Once the meek and mild assistant, she has become her own master. And in my mind she has proven herself to be more than a supporting character. And this issue was no exception. In each encounter I have been looking at how she acts and reacts and (possibly unfairly) comparing her to Strange himself and wondering if he would deal with the situation any differently, or any better. And so far my conclusion is that she is doing it with more gusto and less concern for the repercussions. Not in a reckless way, but in a way that shows she is more determined to get the job done in a balanced way, while ensuring no one sees her as underachieving. Even her own mother has finally accepted there is some strength in her and admires her. 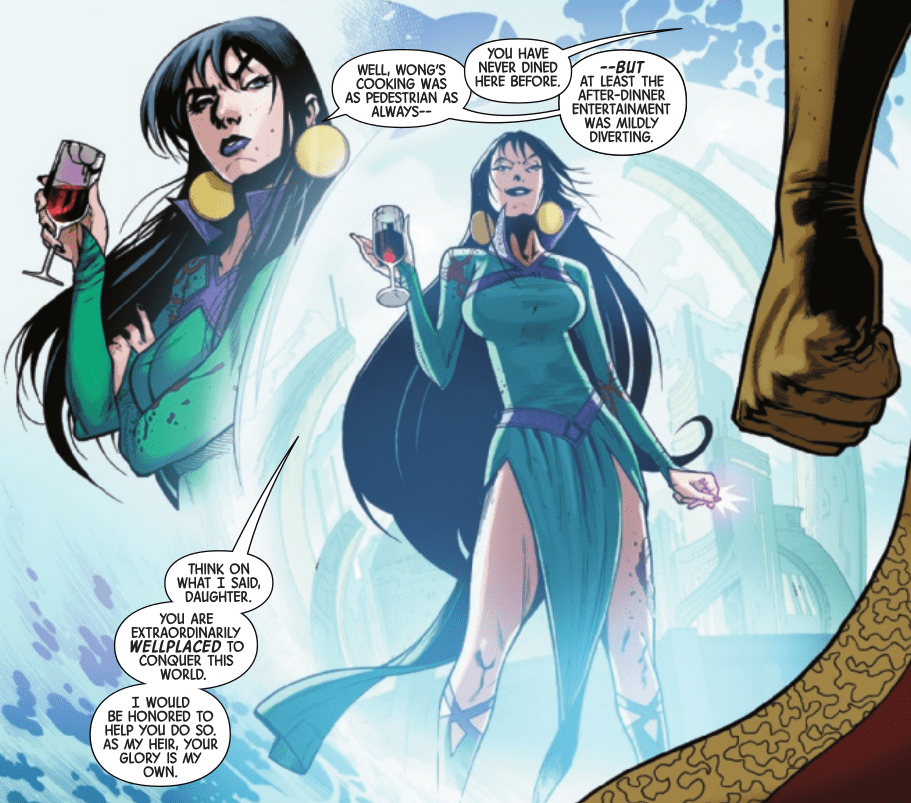 And so I think even though part of me can’t wait to see him back, there is an equal and opposite part that doesn’t want this to end. This issue alone showed her really letting go and giving the villains something to think about. And as she backs up Moon Knight’s play I couldn’t help chuckle at how she deals with them. Especially dropping off Dr Paine into the dimension of the Mindless ones. Something Strange himself has been known to do to his opponents. And visually I enjoyed Marcelo Ferreira’s rendition of Marc Spector in his various guises here. Be it the Fist of Konshu in action mode, or the more sedate suited Mr Knight in thoughtful repose I couldn’t get enough. And Roberto Poggi beautifully inked the set piece, as Clea is shown reclining in Moon Knight’s office while declaring his house doesn’t like her. This image alone displayed them in a perfectly conspiratorial situation, that showed they are comfortable in each others presence. And so allowed for ease of transition to the action scenes that followed. Certainly an uncommon opening for a Team-Up. 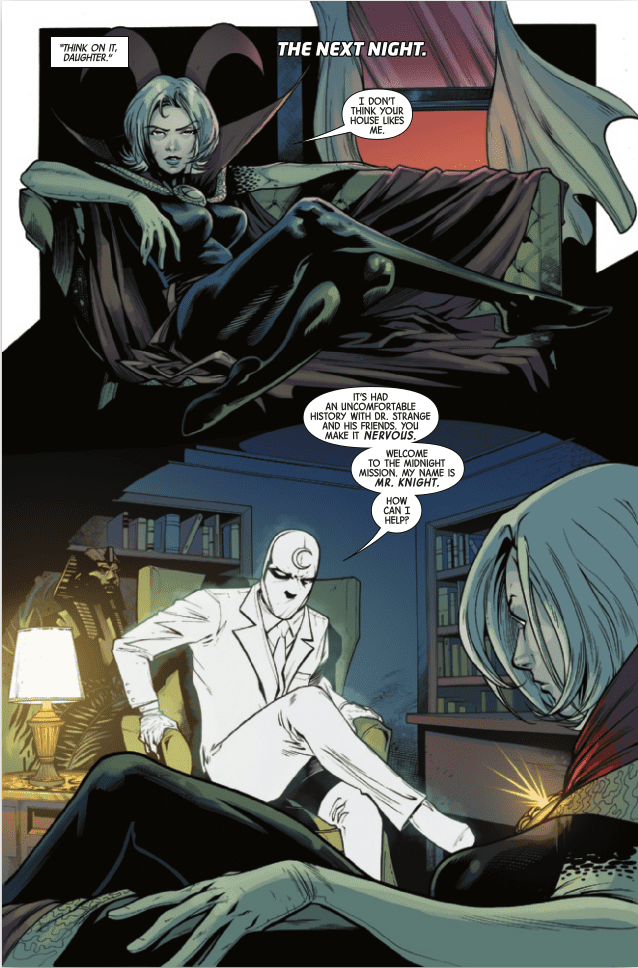 And Javier Tartaglia does wonders with the coloring, going from the muted shades in the stuffy office to the bold brash nightlife as they soar through the sky looking for answers. It was also hilarious to see the duo dipping in and out of windows and scaring the bejeezus out of 8 Ball. And it all added the perfect element of whimsy laced with menace that I expect from a night out with Moon Knight these days. Overall I have to say this issue had a little of everything for everyone. An action packed fun team up. An angsty family reunion. A knock down drag out brawl. And last but not least a cliffhanger end-of-issue reveal that drops a ma-HOOSIVE bombshell. What more could you ask for?? Oh yeah. A zombie inspired cover by none other than Lee Garbett that manages to bring the drama without giving the game away. Major kudos all round folks.

And so finally we have a hope that Clea can do what she has set her mind to from the start and bring Stephen Strange back from the dead. All she has to do is wrest control of him from the cold grip of Death herself. Easy...right? This is going to be FUNNNN!!!

Strange #5: A Knight On the Town With Doctor Stranger