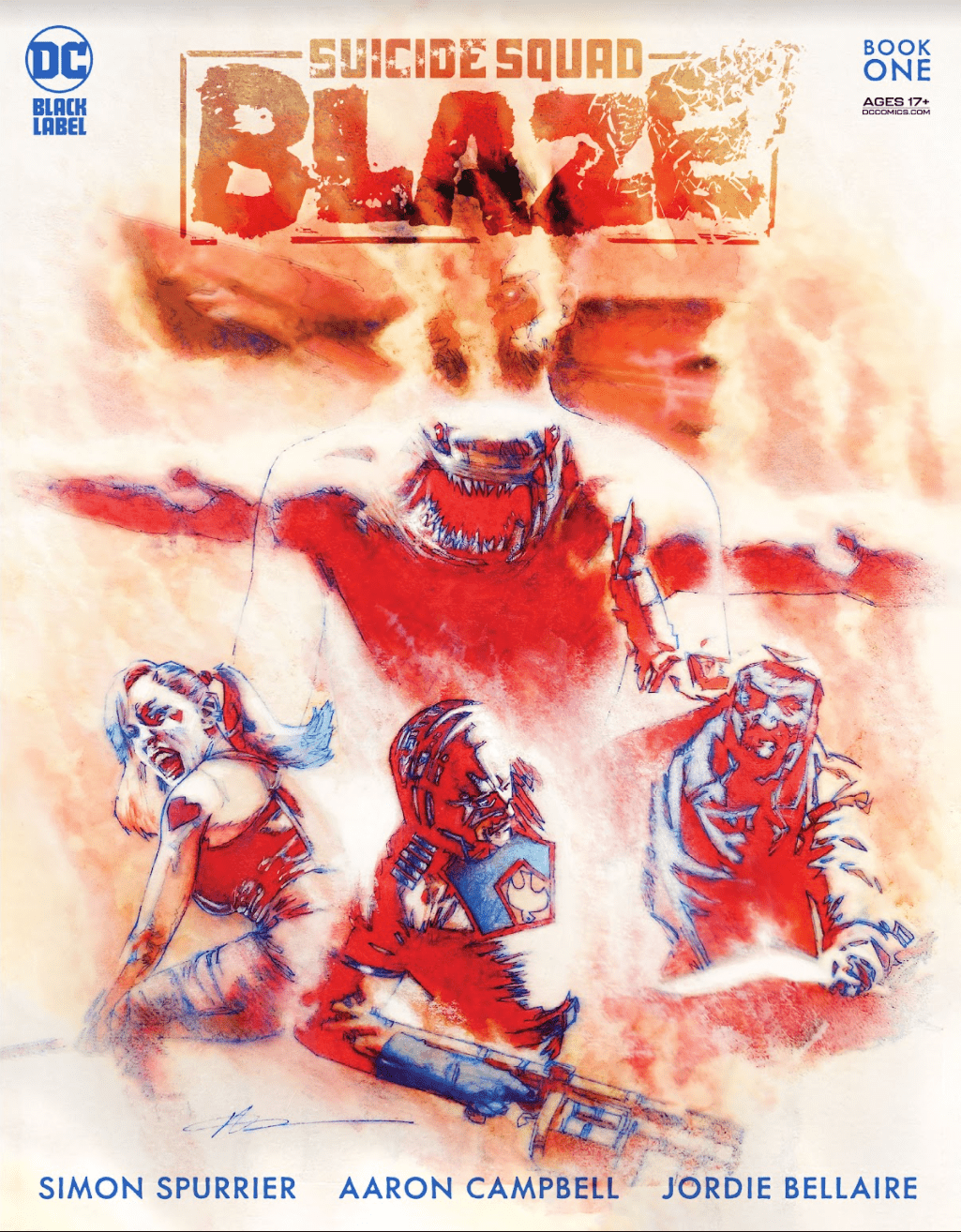 A rogue superhuman is on a global, random killing spree, and only the Squad can possibly stop him, using down-and-dirty tactics that only Amanda Waller would dream up. To pull this mission off, they'll need help from some rookies, though - subjected to an experimental treatment that's possibly the best and the worst thing that could have happened to them! 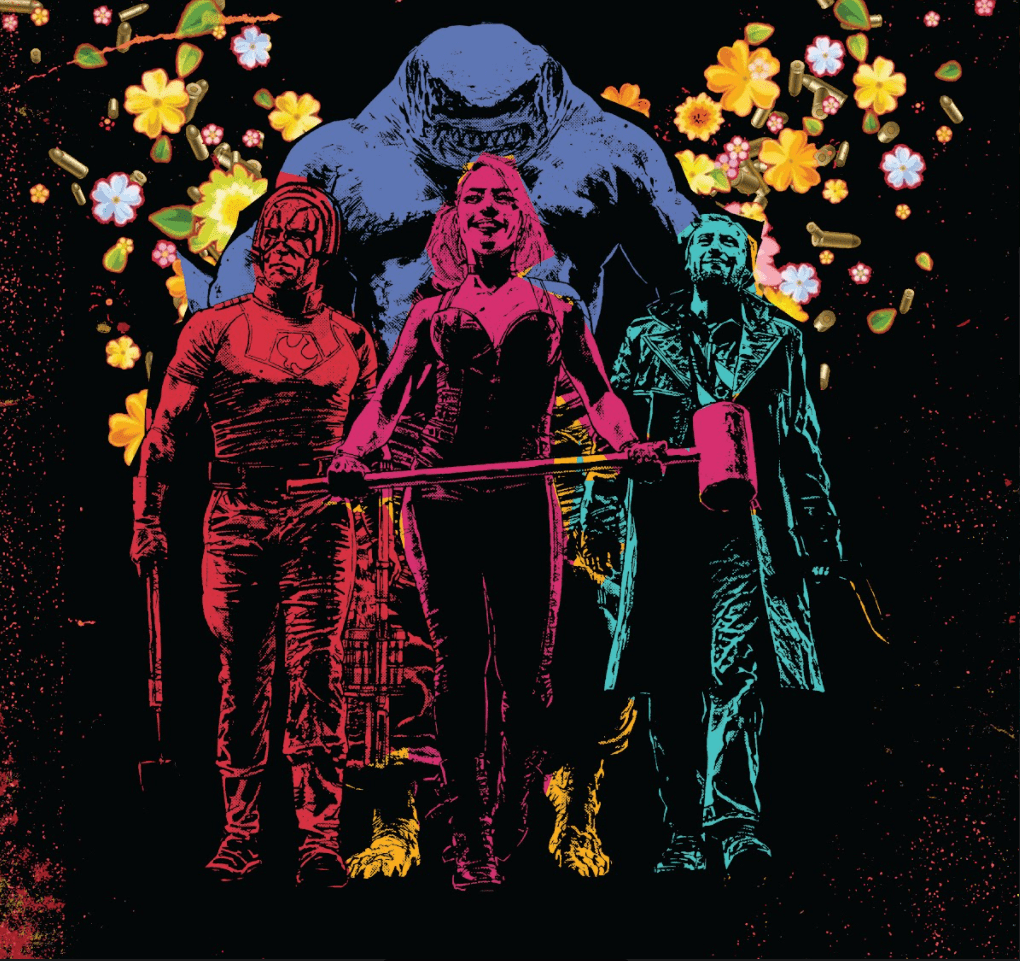 Call it an exercise in cross-IP marketing, but damn, Suicide Squad: Blaze is an unexpectedly terrific comic. Coming right out of nowhere with little hype (especially considering industry darling Si Spurrier is writing it), Blaze hits the ground running at breakneck speed to deliver a tale that delivers on every possible storytelling aspect.

Let’s start with the art, though. Aaron Campbell (Image’s Infidel) is an absolute master of the craft. Every single page is stunning, and begs to be pored over long after the dialogue has been read. Campbell is a cross between Tim Bradstreet and Alex Maleev, and deserves to stand shoulder-to-shoulder those titans. His art is gritty without being dirty and ugly while still powerfully visceral. His people look like people – and that’s an extremely harrowing thing in a story as dark as Blaze. Campbell’s Harley Quinn, especially oozes equal amounts of charm and psychosis – just wait ’til you get to the eyeball scene. In Campbell’s hands, Harley’s full lethality is on full display in the blink of an eye – highlighting just how dangerous she is. If you were to buy this comic for just the art, you’d absolutely have your money’s worth. Aaron Campbell is just that good, and deserves an Eisner at some point in his career.

But… Campbell just so happens to have the good fortune to be working with Si Spurrier on this particular project. Spurrier, no stranger to the more horrific corners of DC (thanks to his criminally cancelled-too-soon Hellblazer revival), isn’t the first author I’d have automatically thought of for a Suicide Squad comic. Spurrier tends more toward intellectually highbrow fare like Coda or The Dreaming or flat-out head trips like X-Men Legacy: Legion. Those are all fantastic comics, but action-oriented they are not.

Spurrier’s take on the Squad, though, is to lean into the psychological impacts on those in Amanda Waller’s clutches. These aren’t the ha-ha-they’re-so-nuts Suicide Squad members of James Gunn’s superb, eponymous film; nor are they the glossy-sheened iteration from comics over the past decade or so, wherein certain ringer characters (ahem, Harley) were guaranteed safety throughout the storyline. Si Spurrier’s Suicide Squad is replete with legitimately damaged, fundamentally unlikeable people, whose job it is to do terrible things. And it’s a job they excel at.

Along for the ride is one Michael Van Zandt, one of a small coterie of would-be supers joining the Squad as they hunt down the rogue, predatory supervillain on the loose that’s leaving a trail of mutilated corpses the world over. Van Zandt and his four fellow prisoners are given a choice: join the Squad using an experimental process called Blaze; gain super-powers.

Van Zandt is our POV character for the whole world, and through his eyes, we see just how fittingly grim and dark the world of the Suicide Squad really is… especially with someone as sociopathic as Amanda Waller pulling the strings. He’s also a basically likeable guy with a crush on a girl who doesn’t reciprocate but uses him just the same – which I’m sure won’t come back to bite him in the butt before it’s all said and done. His fellow cronies are a somewhat more cannon fodder-esque by design – that’s not to say they’re completely expendable, but let’s be real: this is absolutely a Suicide Squad book, so expect a body count.

Si Spurrier, Aaron Campbell, Jordie Bellaire, and Aditya Bidikar deliver the best Suicide Squad book in years in Blaze. The art alone is enough to drop jaws to the floor, but the story is sneakily brilliant in its own right!