Back in the eighties, THE NEW TEEN TITANS became DC’s most popular title and a huge sales success. The series reached its greatest heights with the Judas Contract storyline--a multipart epic that played on comics readers’ expectations and offered shocking revelations and surprising twists at every turn. From the retirement of Robin and Kid Flash, to the birth of Nightwing and the introduction of Jericho, to the ultimate betrayal of a Titan, “The Judas Contract” kept readers positively riveted during its initial run, and still has fans talking today. 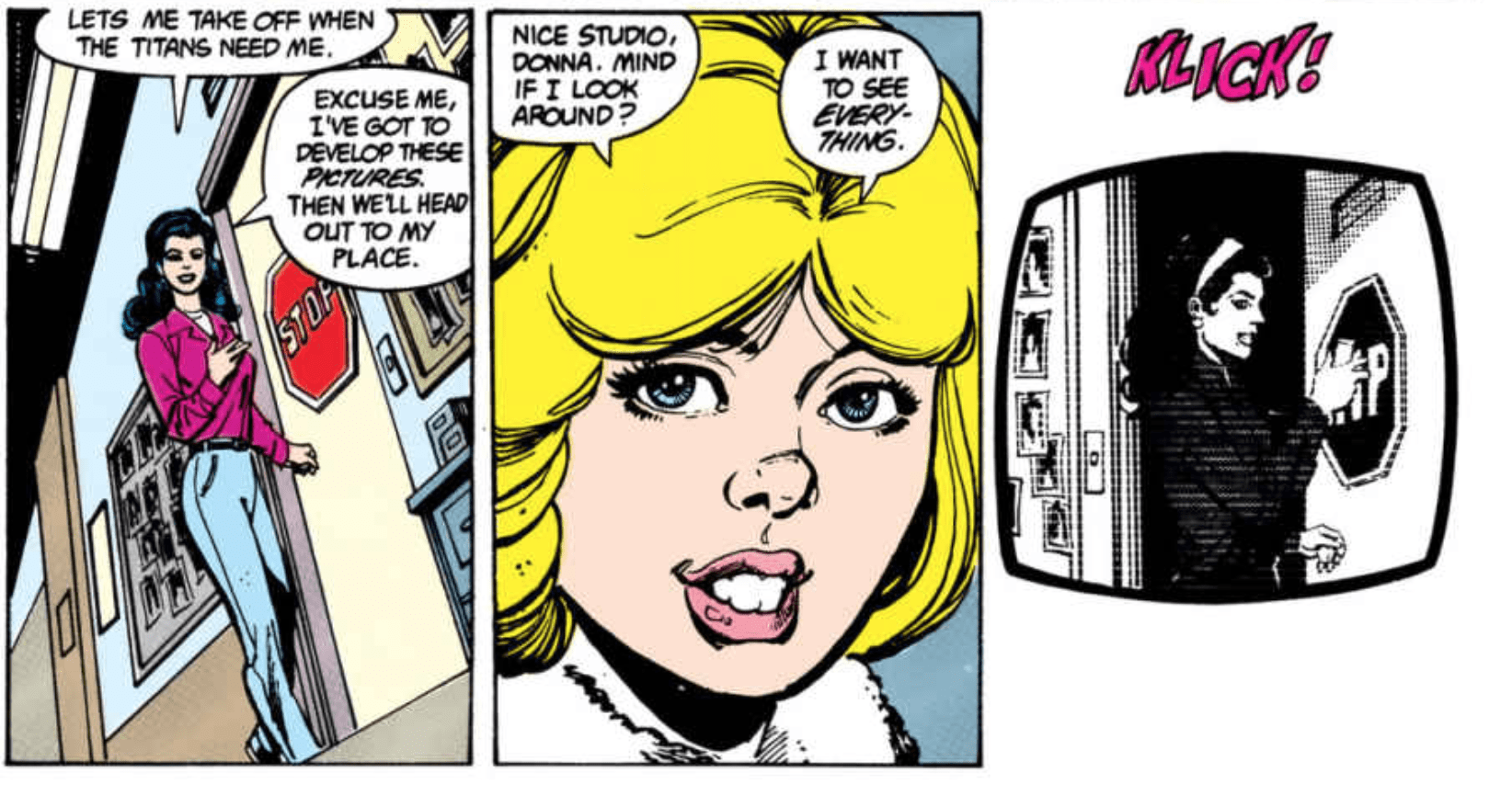 The issue is divided into 4 parts. In part 1, we see what a day in the life of the Teen Titans is like through the eyes of Tara Markov. For months the Titans have been hesitant to tell Tara their real names until they were sure they could trust her, and that time has come. They reveal to her, their names, their homes, and their loved ones. She sees everything about them, and through her, so does the Terminator. Tara has camera contact lenses that record everything she sees.  Most of the team sees Terra as a friend, and Changeling sees her as much more, growing closer even sharing a tender moment and a kiss. Only Raven remains unconvinced, able to sense Tara’s evil, but no trusting herself completely because of her father’s evil influence growing inside of her. A pivotal moment occurs when Tara loses control after Gar (Changeling) pushes her too far in a training exercise and she tries to kill him.

Terra manages to convince the team that she was suffering from PTSD due to the terrorists tormenting her, and her secret is safe. But it does give us a glimpse at just home much Terra hates the Titans and how hard it is for her to hold back from killing them. The end of Part 1 ends with two mysterious figures spying on the Terminator and Terra, two more players…..But first onto Part 2.

Part 2 opens at the end of the action. The Terminator attacks Dick Grayson in his apartment, smashing through the window and looking for a fight. Dick manages to escape and quickly heads off to find the rest of the Titans. As he searches for them, he finds that each of them have one by one fallen into various traps, and it appears he is the last one left. As he moves from scene to scene, piecing things together, he’s followed by a mysterious woman and an even more mysterious man.

The two finally make themselves known at Titan’s Tower, the team’s headquarters. They introduce themselves as Adeline and Joseph and drop the bomb that the Terminator has been working with Tara the whole time. As the Terminator delivers the Teen Titans to H.I.V.E. at their base, we also learn that Adeline is the Terminator’s ex-wife!

Part 3 picks up with an incredulous Dick Grayson faced with the prospect that one of his friends is a traitor, that she’s helped one of their worst enemies capture the team and that his only ally right now is the ex-wife of the Terminator himself. This issue shows us in flashback and through the eyes of Adeline Wilson how she met Slade Wilson. We learn that Adeline was, in fact, the one that trained the Terminator-to-be, who later became her lover and then husband. We find out how he became a mercenary and how he became super-powered through an experimental program. We find out that Joseph is also her son, in addition to Grant whose death started the Judas Contract.

Adeline recounts how Slade’s mercenary work resulted in Joseph being taken hostage and having his throat cut. Now Joseph is mute, but because of the experiments on his father, he was born with the power to possess anyone through eye contact. Dick decides to trust Adeline and Joseph, but can’t break into H.I.V.E. as a civilian and so he becomes Nightwing. Joseph introduces himself (through his mother) as Jericho. The two go off in search of the Titans.
In Part 4, the captured Titans come face to face with their betrayer. And here they see her for the first time. The angry, mocking, bitter child that she really is come through, baring her hatred for everything about them. Nightwing and Jericho make their way into the base, but are eventually surprised and then captured by Terra. Things get complicated when the Terminator recognizes his son, and so does Terra. Terminator demands a deal for his son’s life, now forfeit since he has teamed with the Titans. Looking into his son’s eyes……Jericho takes control of his father. Freeing the Titans, he begs his son to release him. Jericho eventually leaves his father, but the damage is done.

The idea that the Terminator had gone soft because he cared about his son is enough to unless all of the hate Terra feels for no real reason, and she brings her full powers to bear. She downs most of the Titans, only Raven manages to subdue her for a short time. In an explosive display of power, rage, and hatred Terra creates a calamity that the Titans can only shelter each other from as Terra destroys everything around her, including herself. The Titans bring Terra home to her brother, Geo-Force of the Outsiders, and tell him Tara died fighting the Terminator, sparing him the pain of the truth. As the issue closes, the Titans are left heartbroken but with a new member, the son of the man that tried to kill them. Will the Titans be able to trust him? That’s a story for another day.

This story is the culmination of a story that began 40 issues prior with the Ravager’s death and has been building in earnest for about 20 issues since Terra first appeared. It also contains several milestones — The first appearance of Jericho, the Terminator’s origins, the death of Terra, to name some major ones. The most enduring of these is probably Dick Grayson’s new career as Nightwing, the persona he’s been known by since this time. This story leaves a lasting impression on this team though, and they are driven to seek out and destroy H.I.V.E. for the pain they have caused. It takes a long time for them to recover, and arguably they never do until Crisis on Infinite Earths changes everything a year or two later. We learned a lot about the Terminator too, his motivation and where he is heading as he goes further and further down a dark path.

This is considered one of the best story arcs of the series and of the 80s in general. And I pretty much agree with that assessment. Wolfman and Pérez were a powerhouse team, crafting stories that wound through years with purpose. Terra as a villain was pretty two-dimensional in many ways. She’s a “bad girl” so she smokes, drinks, wears makeup at 15. She sleeps with an older man, making him a predator and her more of a “bad girl”. Getting past the “eww” factor of a man with grown children sleeping with a 15-year-old for any reason, this two-dimensionality doesn’t fall flat or seem trite, because it works in the context of Terra being the purest kind of villain. 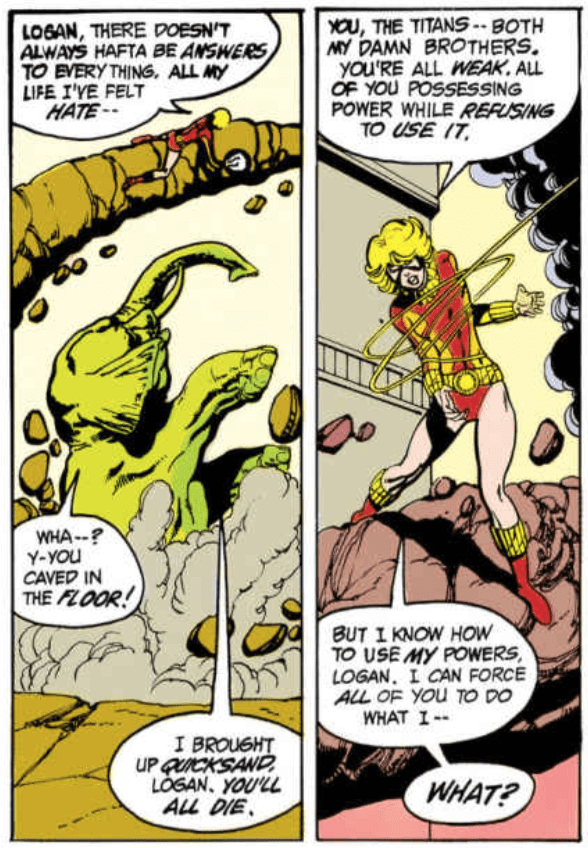 She does all of these things because that’s what bad people do, and she wants to be bad. Her childish attempts to show how bad she is in some ways obscures the true horror of her. There have been very few if any mortal villains that were as truly evil as Terra was. There was really nothing she felt or cared for except destruction and hate. Most villains have a motivation, a turning point that pushed them to be who they are, even a redeeming, relatable aspect. But Terra was born how she was and despite being surrounded by loving people, she felt nothing but hatred for everyone. It was a bold move to have someone so young be so deceitful, spiteful, and evil. And this was in an era were deaths were often permanent (or at least much longer term), so there was real weight to a character that had been so fully developed dying in such a manner.
The story does a great job balancing action and exposition. The first issue is mostly Terra learning about the Titans and their private lives, but there are several training and sparring fights that keep things lively. We see Dick Grayson’s detective and survival skills in full form in the second issue and we’re reminded that he’s one of the world’s greatest detectives as he pieces together how the Terminator brought them down. The third part is backstory, but full of action and adventure as befitting a mercenary’s life. The fourth and final part is practically non-stop action, but with a powerful emotional punch bringing everything to a satisfying if somewhat shattering conclusion.
This was the Titans’ high time, the writing, the art, the plot, the inking, the colors, every single thing about this book was at the top of its game. Wolfman and Pérez created fully three-dimensional character with their distinct personalities and looks. I’ve always been struck in particular by Pérez’s attention to detail, how he individualized faces, body types, clothing styles, everything. Even in street clothes or uncolored pictures, it was possible to identify each character. The art and the dialogue worked seamlessly together, giving a real sense of flow and reality to these characters. In terms of storytelling, it really doesn’t get much better than this in the world of comics. If you’ve never read this story, do yourself a favor and pick it up.

Grab your beverage of choice and settle in for another Sunday Classic with Comic Watch. This weekend: The New Teen Titans: The Judas Contract!