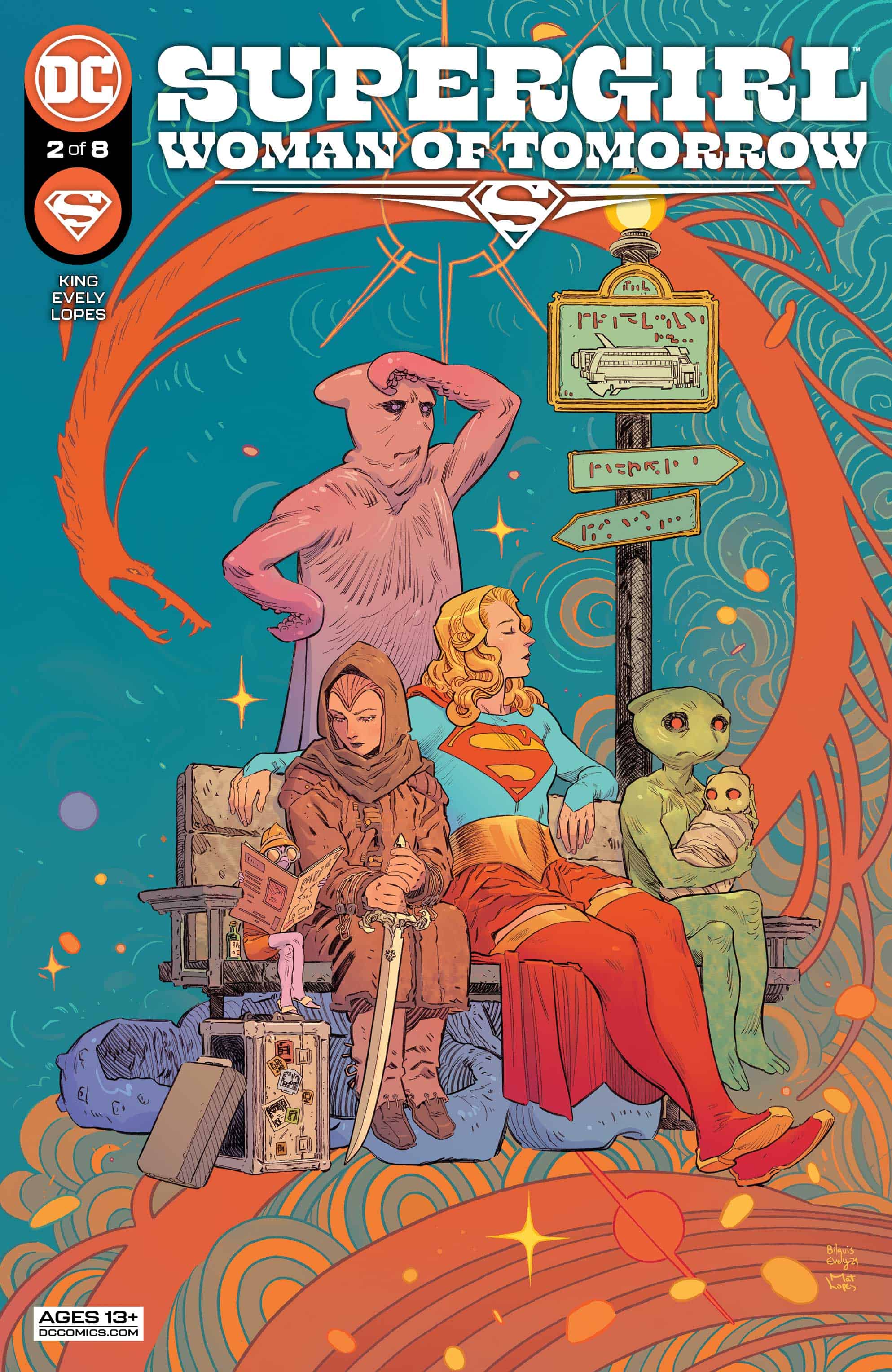 With Krypto injured and his assailant on the run, it's up to Ruthye and Supergirl to track down the villain so that the both of them can get their revenge, but first they have to get through the terrors of public space travel!

Talk about being absolutely phenomenal. 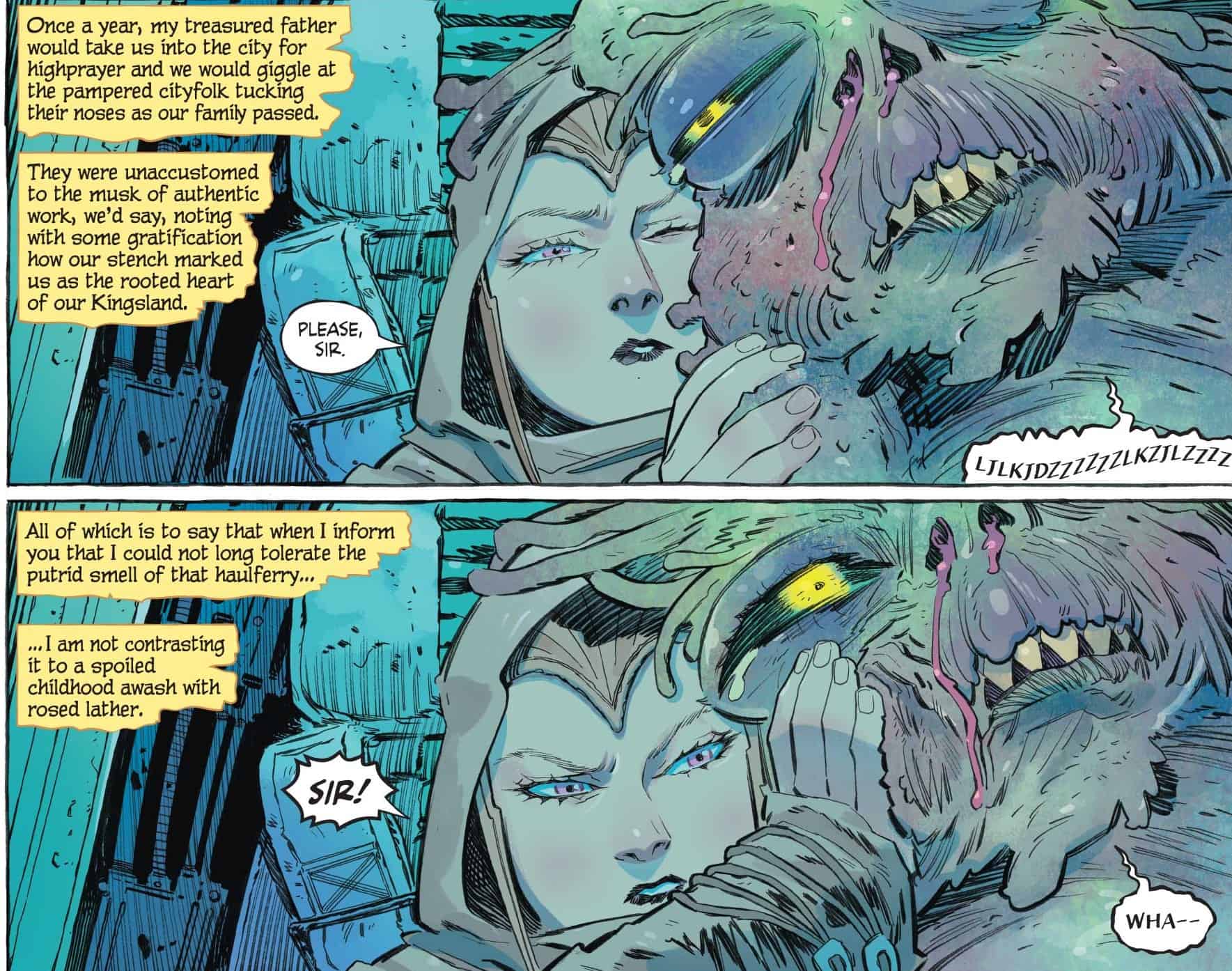 While I usually expect a turn of absolute despair in Tom King’s work after a certain amount of issues, Supergirl: Woman of Tomorrow has managed to become one of his most hopeful stories since Superman: Up in the Sky. Narrated by Ruthye, the young girl who has contracted Supergirl to help her take revenge on the man who killed her father, the book finds its emotional center as the child finds herself in awe of the strange nature of Supergirl and how other people view her as they make their way through the galaxy over a few weeks.

This works as a storytelling method because Ruthye, having never stepped off of her planet before, is new to the customs of people who have no regard to her personal space, people who have a vendetta against the Superfamily and the strange but forlorn kindness of Supergirl herself. Ruthye is a character with much room to grow and Tom King makes her naivete and warrior-like honor very charming. 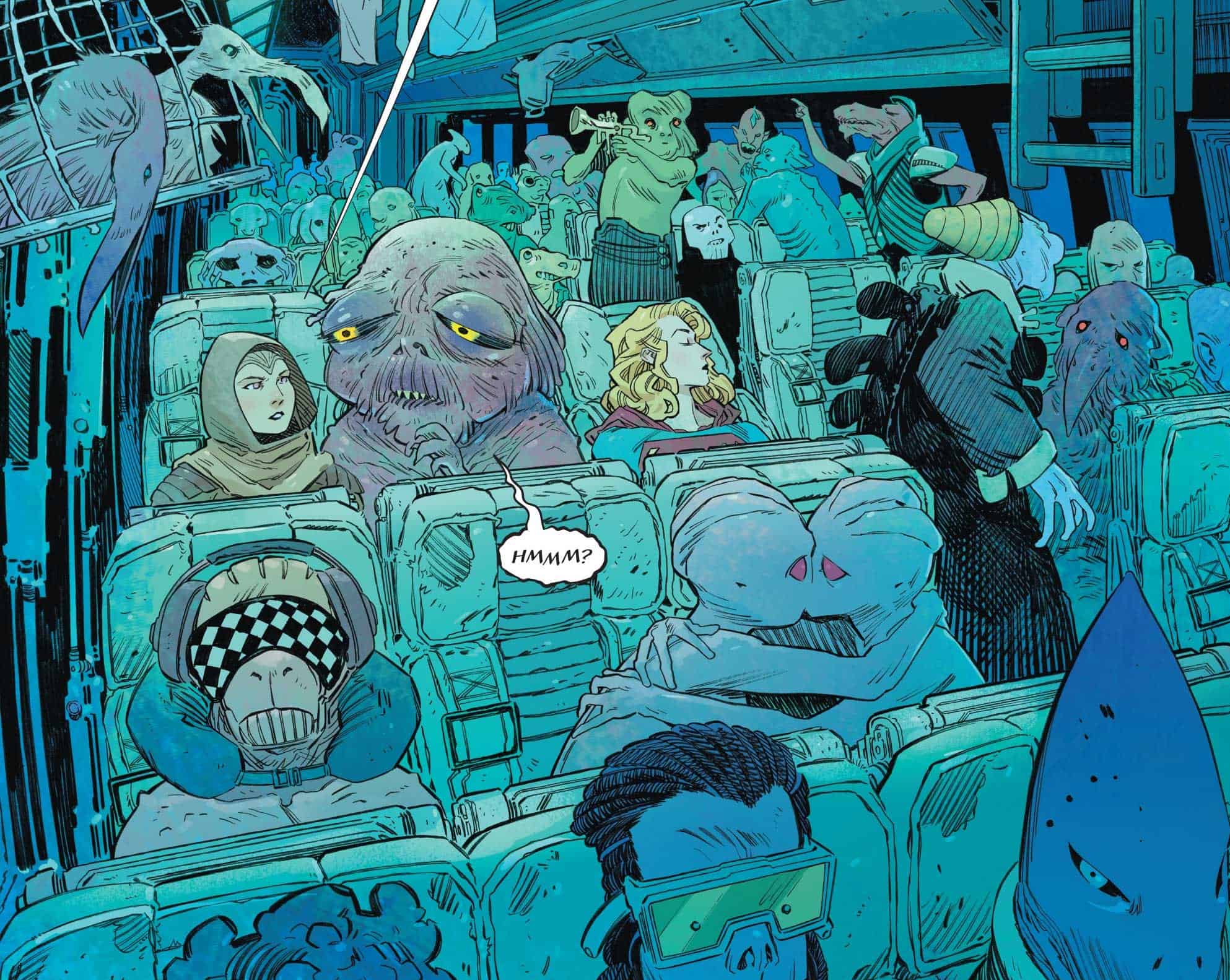 This is doubled by Kara’s own fantastic writing as a character. While Superman usually stands up to people with a firmness that makes them back down and cower away, Ruthye notes that low-life criminals and such approach Supergirl with “puffed up chests” and she swiftly takes them down with snark and light brutality that Ruthye didn’t expect – but then this is countered by a kindness that Supergirl shows Ruthye, showing her how to wash her hands with soap and water, one of the best scenes in the book.

Bilquis Evely was absolutely the most perfect artist for this book alongside Matheus Lopes on colors. 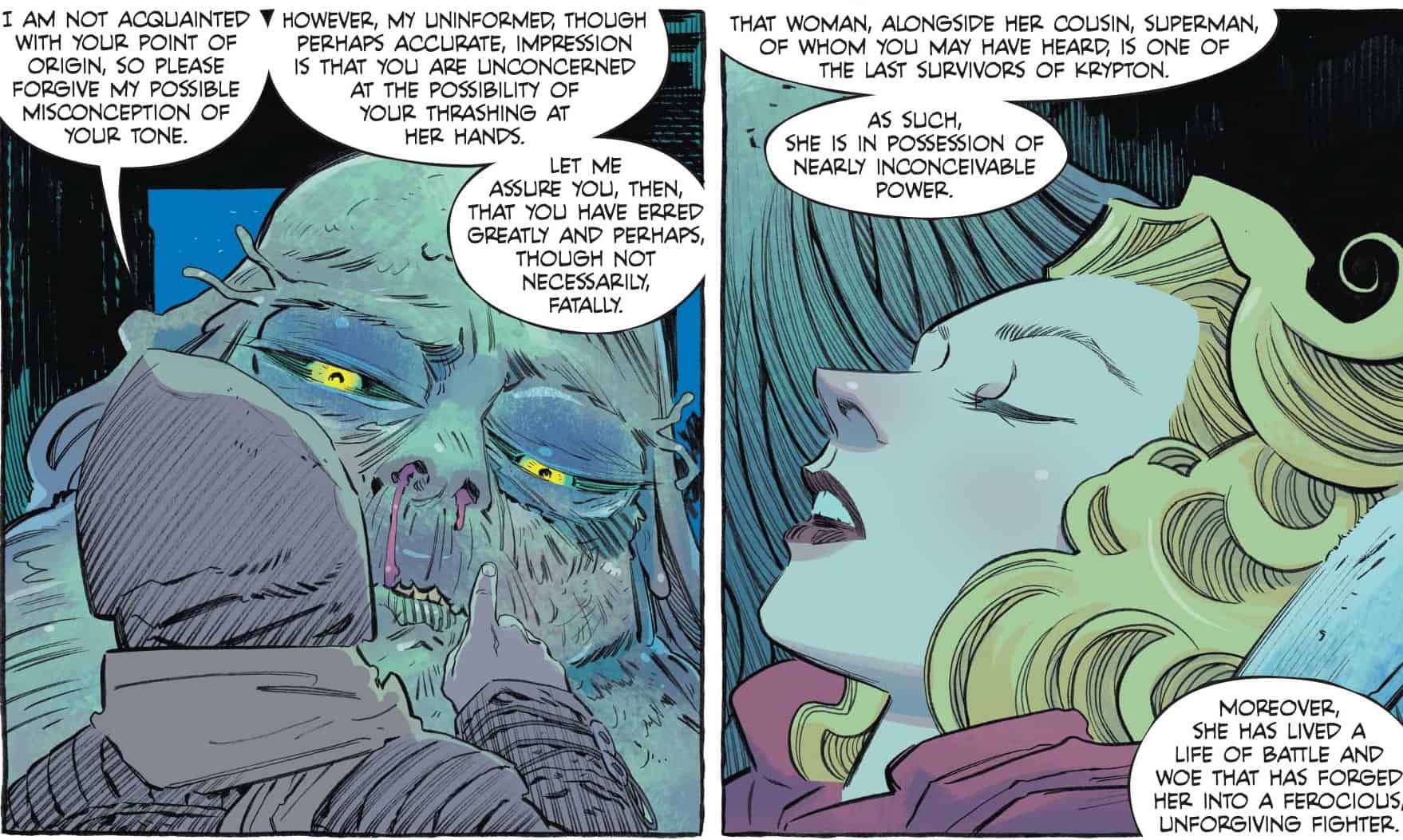 Fitting the motif of this issue perfectly, Evely manages to capture the claustrophobic nature of bus travel alongside the freedom of being able to stretch one’s legs after a long period of traveling. Some of her sequential panels feel all too real as aliens repeatedly lay on Ruthye’s shoulders, causing her to become disturbed and push them away for invading her personal space. Evely captures the sheer agitation of the event with Ruthye slowly losing her cool with each panel of these heavy beings in her face.

But the moments when she and Supergirl are free are absolutely breathtaking. Evely has an eye for scale and beauty as her art shows the diversity of the various races of aliens and creatures as all of them are packed tightly into these confined spaces and contrasts those visuals with the  absolute vastness of space by comparison when Supergirl and Ruthye are out and about. Two scenes in particular that stood out are one when Supergirl has to take some red kryptonite which allowed her to regain her powers to stop an attacking dragon and the one where she teaches Ruthye to wash her hands. 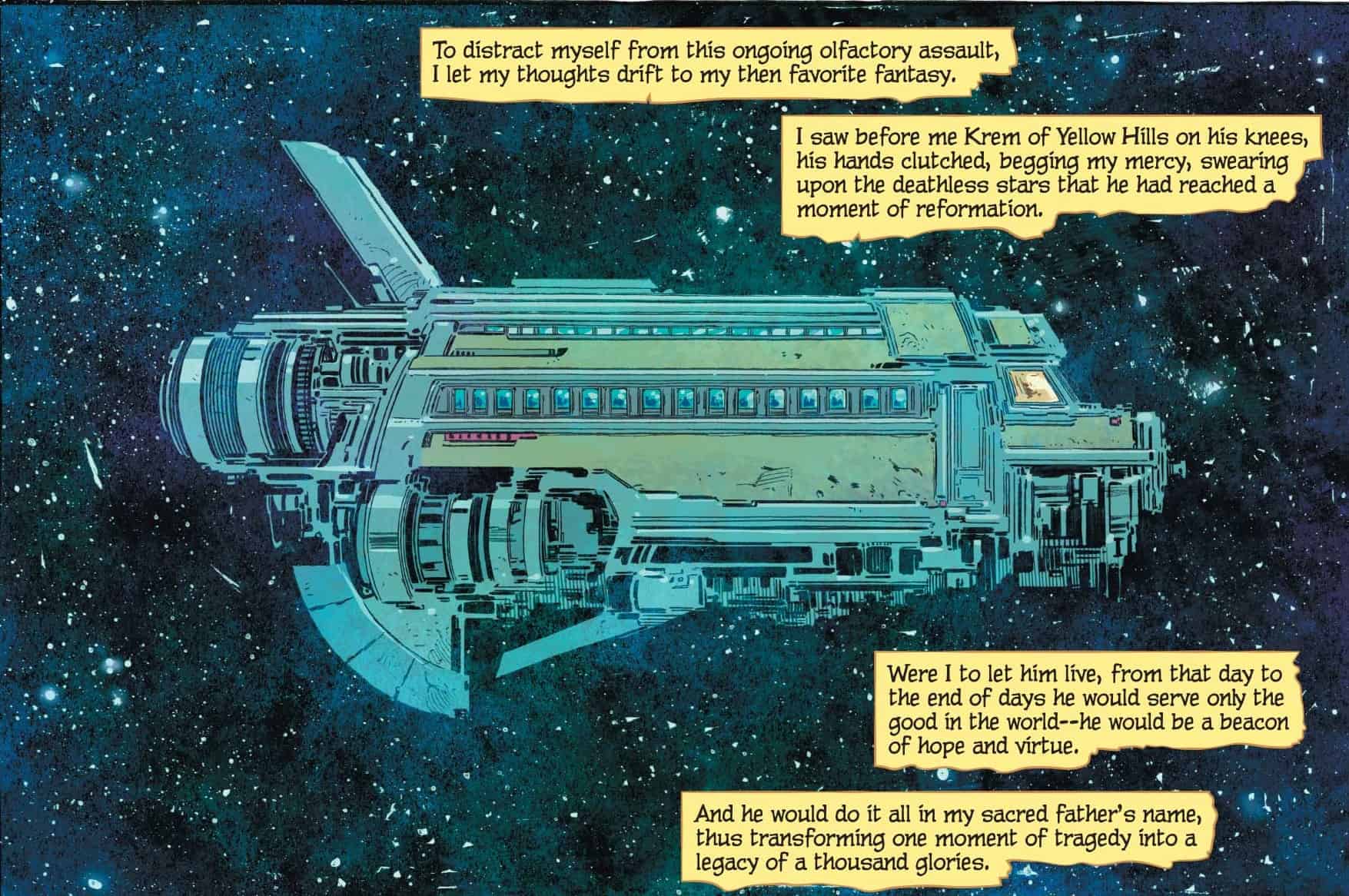 In the first scene, Supergirl looks absolutely amazing as her eyes are set alight and she radiates an aura like a phoenix, greatly accentuated by Lopes amazing and vibrant oranges contrasting nicely with the dark blue night sky and the bright blues of the dragon itself. The art and colors create an almost hypnotic effect as readers can get drawn into every single detail of these pages. They are beautiful in every way and this works even better with the short sequential sequence taking place afterwards where Supergirl’s kindness is brought to the forefront as she shows Ruthye has to lather, rinse and repeat, giving us the dual sides of Supergirl; the powerful warrior and the humble hero.

Overall, Supergirl: Woman of Tomorrow succeeds because of both great writing and even better art. I never thought I would be quite as invested in this series as I am, but this issue absolutely has me hooked. Supergirl hasn’t quite had this kind of focus and purpose for a long time and I’m excited to see exactly where this book is going. Tom King, Bilquis Evely and Matheus Lopes are absolutely killing it with possibly one of the best Supergirl stories ever written!