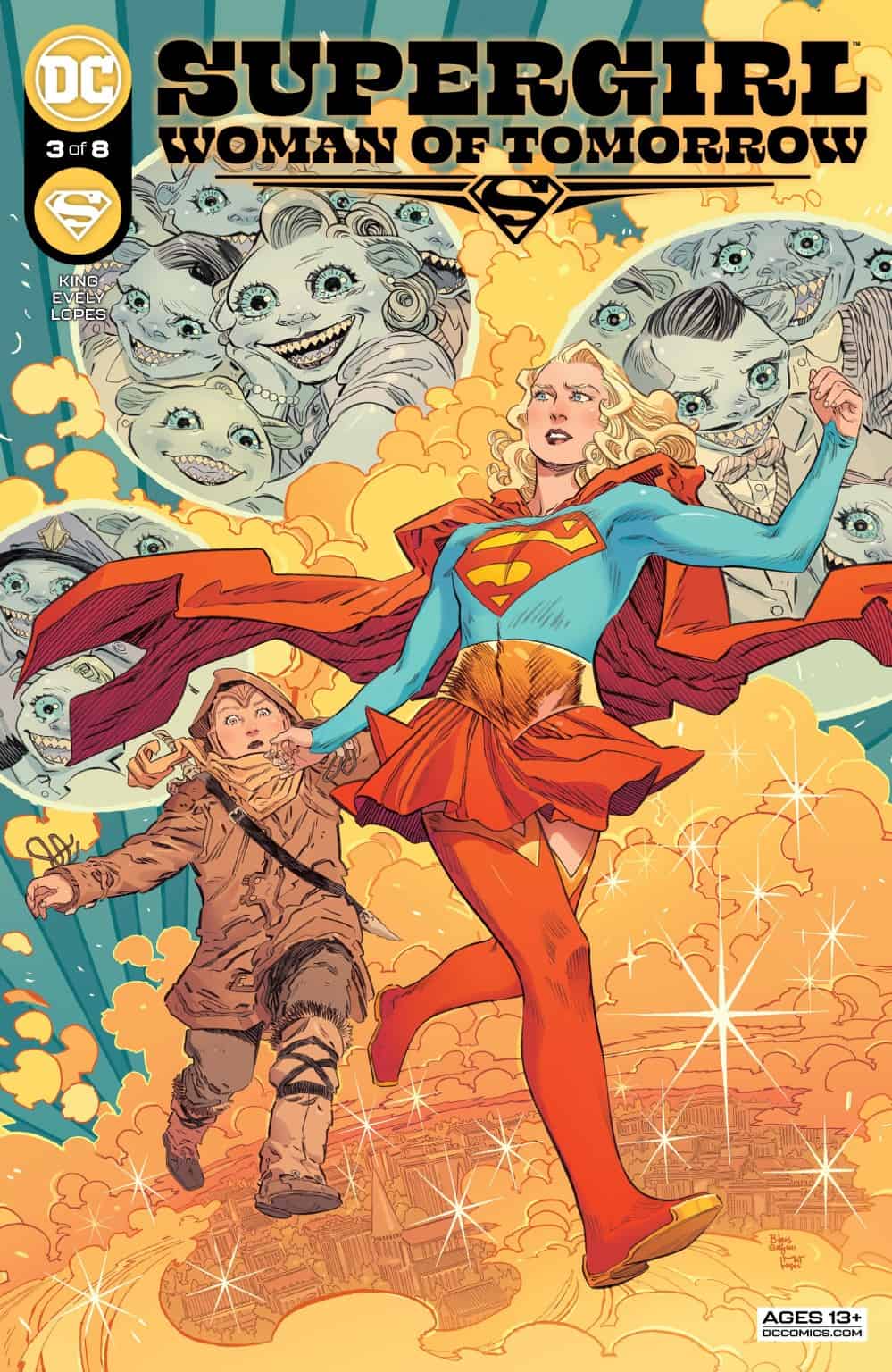 With another lead on the whereabouts of the villain Krem, Supergirl and Ruthye make a stop in a small town, but what secrets are they hiding and how is Krem involved? 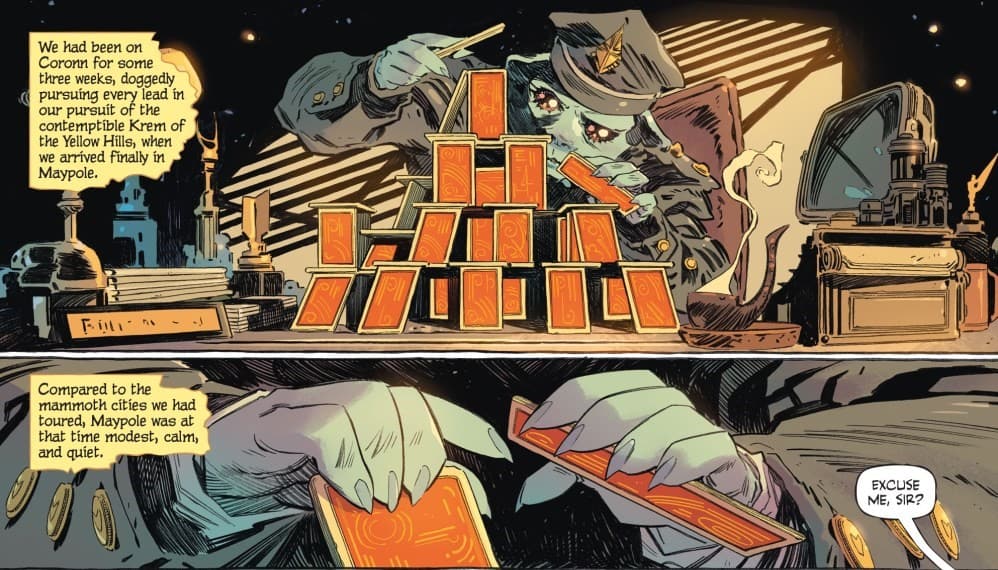 This is the hard lesson that young Ruthye has to learn as she continues her journey with Supergirl and finds that the man that they’re hunting for is even more evil than they previously thought. Tom King outdoes himself with this issue as he gives Ruthye her second taste of villainy overwhelming justice in a small town with a huge secret that makes her question if her quest for revenge will even be close enough to balance the scales of Krem’s bloodshed.

We’ve seen in Superman: Up in the Sky that King is very adept at telling a story of hope even in the face of terrible odds and using Ruthye as an anchor to the story while looking up to Supergirl was a great idea. She views Supergirl as this alien being with these great abilities, but is also opened to just how different Supergirl is compared to the lore surrounding her – she sees that Supergirl is just like everyone else, flaws and all, but uses her skills and talents to do good for the rest of the universe as well. However, her naivete also blinds her to the idea that sometimes bad people get away with terrible things and even the good people of the universe can’t be there to stop it all. 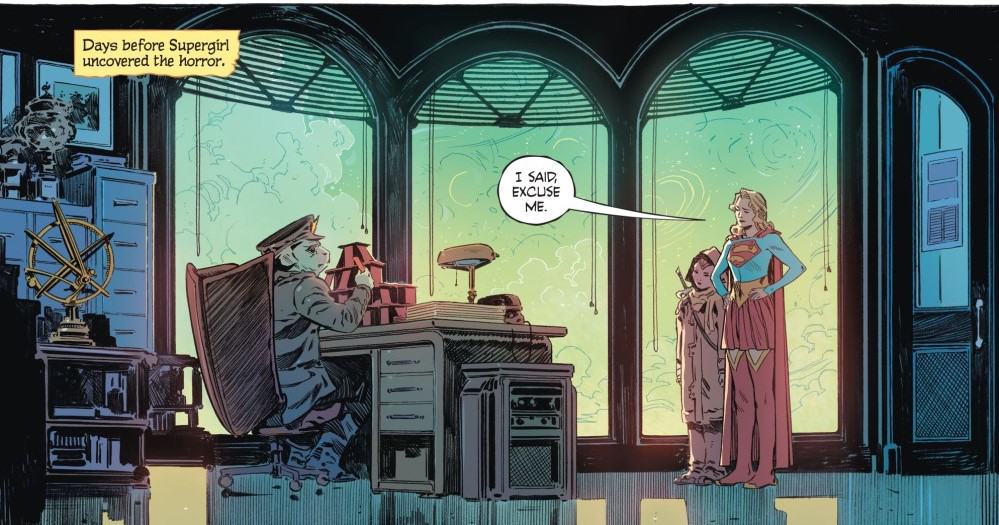 I normally criticize Tom King for having overly depressed protagonists so this story is a breath of fresh air. While I do love the stories that he tells with those haunted and dark main characters, Ruthye having this idea of honor and justice and slowly watching it get ground down is the opposite approach, but also has hints that while Ruthye will have low moments, she’ll learn from them and come back even stronger than before – this issue is the first of those moments and I am very excited to see just how far things can sink before the light at the end of the tunnel.

As always, Bilquis Evely and Matheus Lopes stun with their amazing art and coloring. These two are like a match made in heaven when it comes to creating beautiful and captivating scenes, showing grand scale and wondrous colors with each subsequent issue. The art for this one is particularly amazing as the pair have to work within the confines of a small town and still make Supergirl and Ruthye seem small compared to the underlying story of the town itself. 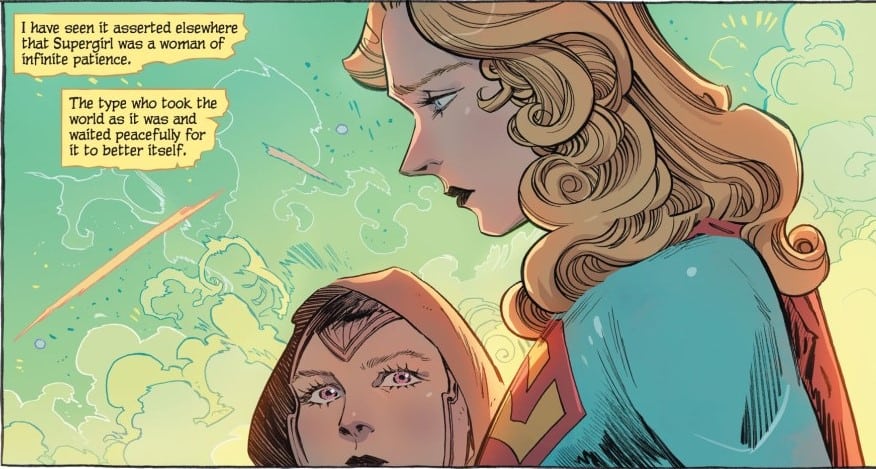 Evely’s line art is breathtaking with every issue. Though most of this issue is talking before the eventual horrific reveal, Evely makes use of excellent facial expressions – making the citizens of Maypole change from polite and charming expressions to absolute resentment and anger after being questioned about Krem’s whereabouts. Supergirl is given an unconvinced and suspicious look about her while Ruthye stares blankly, still acclimating to the larger universe around her.

Of course, the facial expressions are only the tip of the iceberg as Evely excels at these amazing single page splashes of Supergirl and Ruthye looking out into the very beautiful view of the town and later, possibly the best page of the entire book, Ruthye holding on to Supergirl as they fly to the outer edges of Maypole to the hidden ruins of what was once known as Purpletown. This page is beautiful as it captures Ruthye’s awe at the sheer speed of travel, Supergirl’s concerned face and beautiful cloud art. 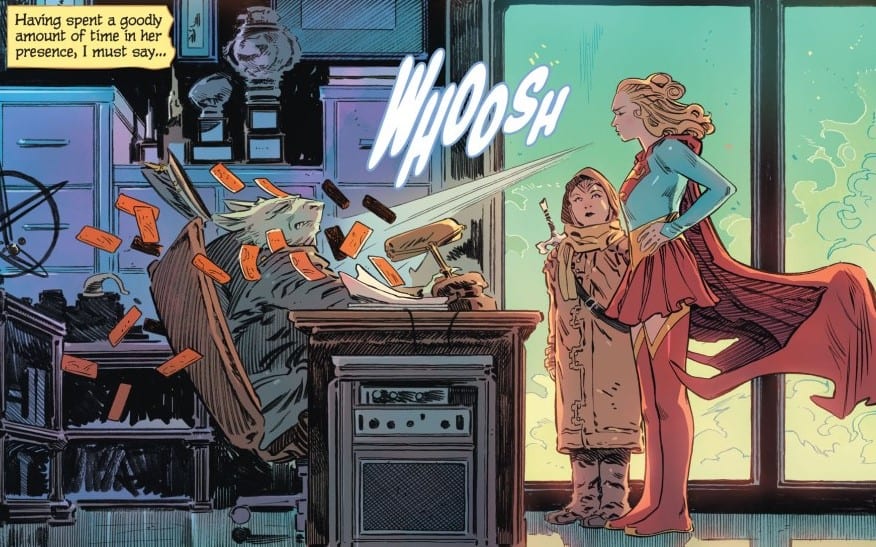 Of course as beautiful as these big moments are, the smaller ones are what give this book a sense of personality and weight. When assassins try to kill Supergirl and Ruthye at night, Supergirl holds Ruthye tightly to her to shield her from the bullets. The panels move closer and closer to Ruthye’s closed eyes to show that even though she’s afraid, she still feels protected by Supergirl. Not only that, but when Supergirl instructs Ruthye on how to hold on when flying, it’s almost feels like when a parent is teaching their kid how to ride piggyback (something Supergirl even says to Ruthye directly, but the young girl doesn’t know what piggybacking is.) It has the warmth of those action movies where the gruff, badass hero is learning how to deal with children and it is amazing.

Lopes accentuates Evely’s lines with striking and vivid colors. Lopes was the best possible choice of colorist for this series as his choices fit each issue thematically. Most of the book is bathed in a yellow that can signify abundance, such as abundance of happiness and tranquility, but can also double as the color of duplicity, something that Supergirl and Ruthye discover as they learn the town’s gruesome truth. When the skies aren’t yellow, they give way to hazy blues at night, which makes the planet seem like home, but also still quite cold and alien. In a town full of blue people, even the sky belongs only to them. It’s calm, but an eerie calm. 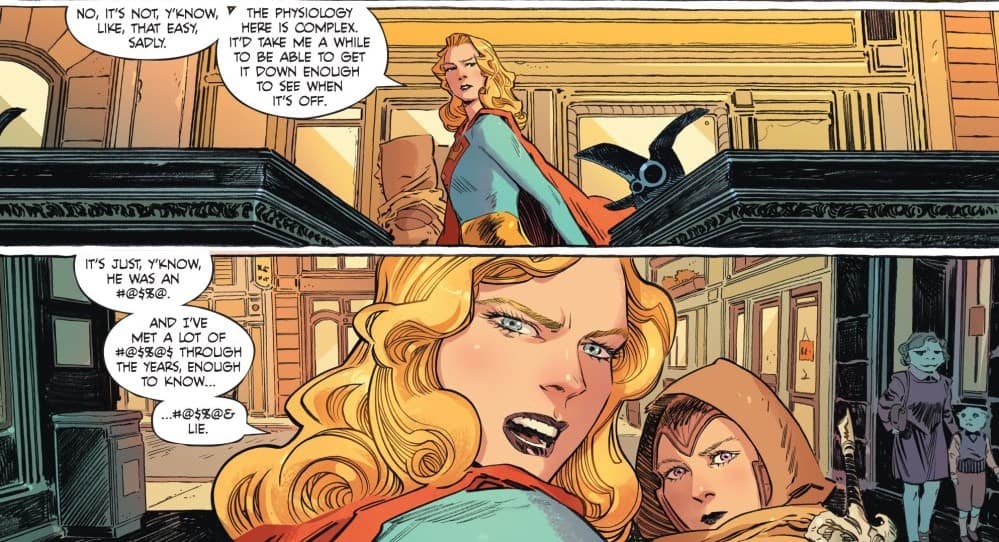 One of Lopes best use of colors comes during the aforementioned assassination attempt. While the page initially has the blue tint to it, one shot rings out and the panel is orange, then when the rest of the shots spray, the entire next page shows Supergirl and Ruthye showered in light orange and yellows as bullets with hot yellow outlines whiz past them. The background is inked completely black to show just how intense the other colors are. It’s very striking and so sudden that it elicits feelings of terror and makes you feel the heat of the moment. Matheus Lopes is VERY good at what he does.

Clayton Cowles’ lettering never fails to amaze! With most of the narration being from future Ruthye’s perspective, the narrative bubbles are mostly in the corners or closer to Ruthye’s position in the panels. They take up the proper amount of space and never feel too claustrophobic or excessive. However, the initial few pages have so much dialogue that the word balloons feel a bit bloated, but thankfully they level out as the book goes on.

King, Evely, Lopes and Cowles are an absolutely dynamic team and have breathed new life into Supergirl and have given us another amazing character in the young Ruthye. This book has great writing, stellar art, fantastic coloring and awesome lettering - I can’t wait to see how the rest of the story unfolds!