Supergirl: Woman of Tomorrow #4 – A Lesson in Pain 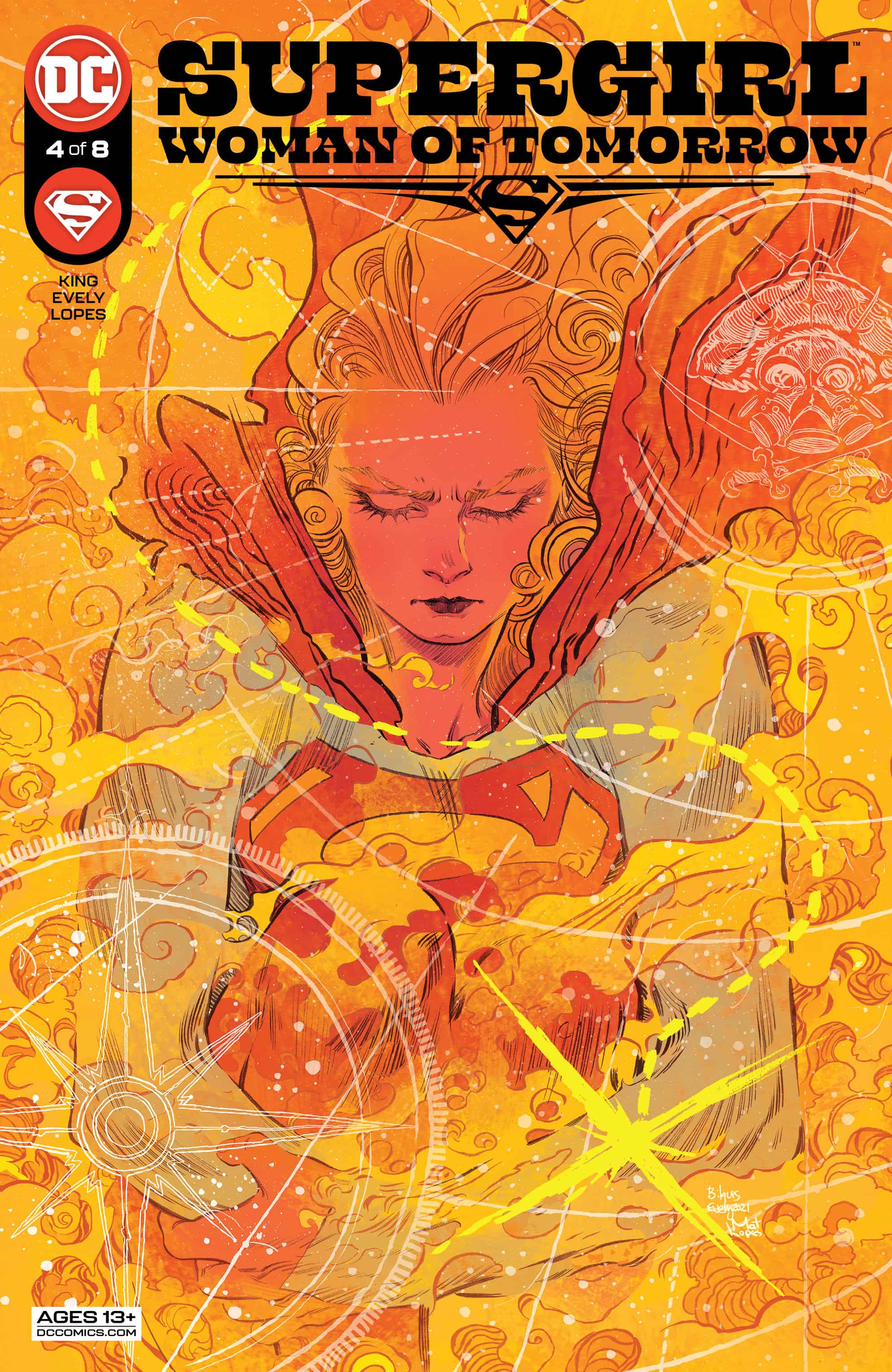 Hot on the trail of the villainous Krem, what brutal crimes will Supergirl and Ruthye come across in the wake of his path of destruction? How many lives will have been ruined in his wake and how will their views of justice effect the pairs relationship?

This issue was a test of endurance. 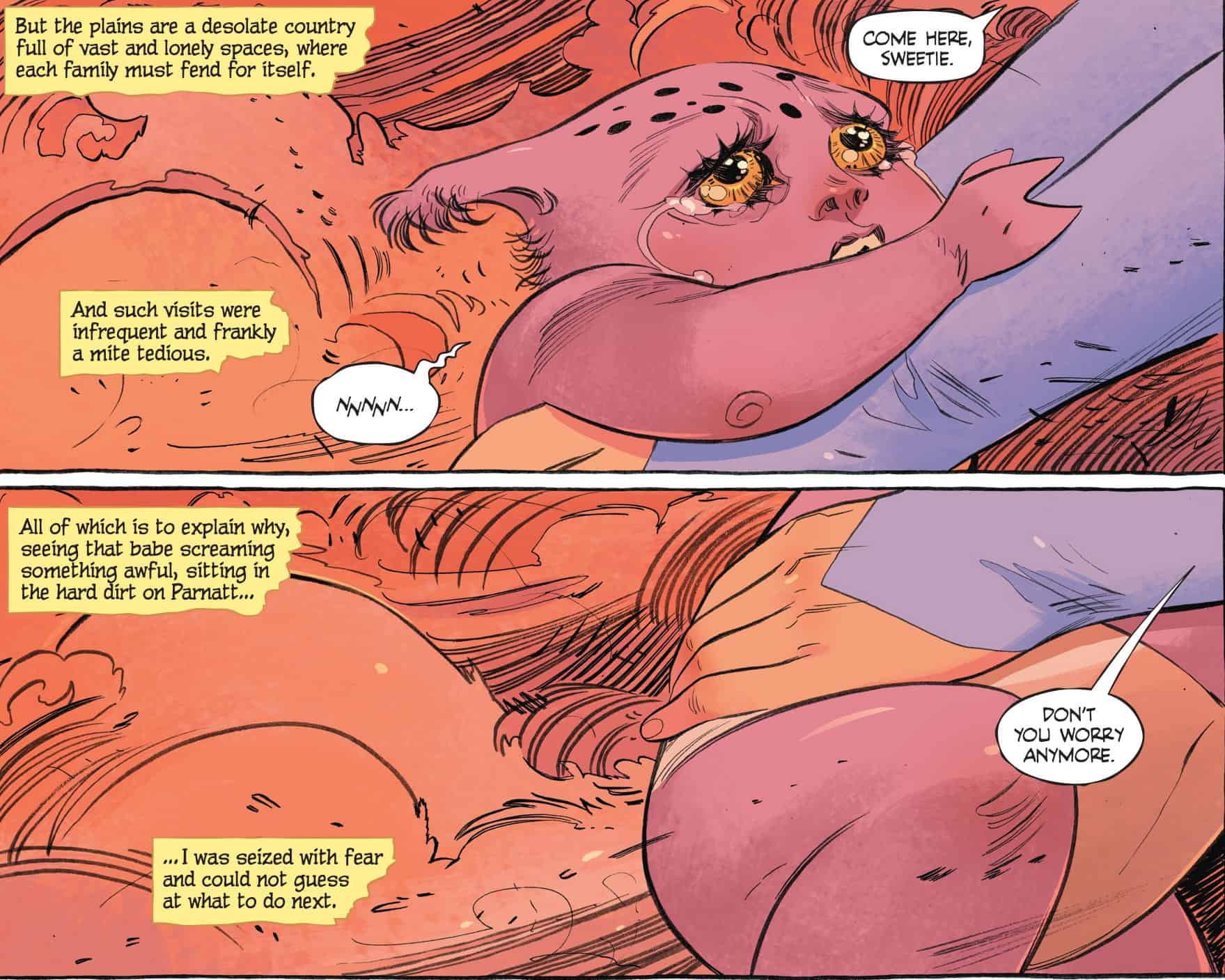 As if common with Tom King’s works, there absolutely has to be an issue dedicated to focusing on just how terrible and dark the main characters mission is and this is exemplified by how many people and societies Krem has destroyed since being released from a prison in Issue #3. Having joined with a group of Brigands, Supergirl and Ruthye follow the path of the villains as they cut a swath through the galaxy and talk to the various people that have been left behind in the carnage. This issue is absolutely depressing.

This might be one of the few times where I believe it is absolutely needed. The Super-Family is often criticized for how often they’re seen and portrayed as being above it all and never having challenges placed in front of them, but people don’t realize that their challenge is stymying the loss of life whenever they have the ability to do so. King presents that struggle through Supergirl who just gets beat down further and further throughout the issue, knowing that she has the power to stop things, but never being fast enough to catch Krem and end his reign of terror before he has the chance to hurt more people. As they travel from planet to planet, she sees mountains of dead at the hands of one man and his fellow murderers.

Ruthye, on the other hand, is presented as being one of the products of such destruction, having lost her father and being the catalyst for this adventure. She knows what Krem is capable of and being a child, she believes that she knows how to deal with Krem and process the horrific actions that Krem has committed, but Supergirl, acting as Ruthye’s caregiver at the moment, sees fit to shield her from such things. It’s a good dynamic that results in a bevy of tense moments between them, but shows that both of them want to mete out justice if they can. 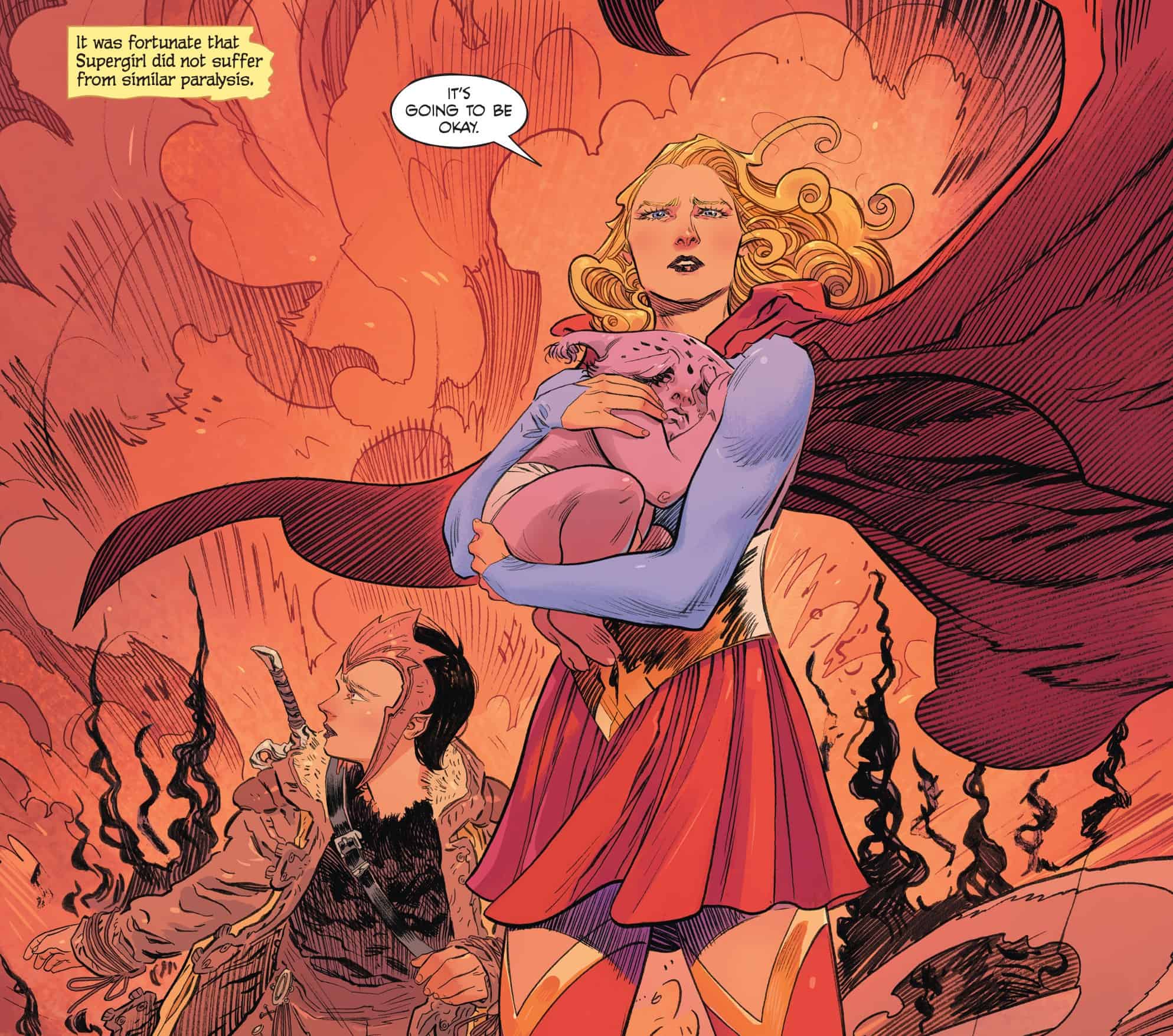 This issue also acts as something of showcase for the talents of Bilquis Evely, Matheus Lopes, in terms of scale, architecture, amazing use of color and fantastic word bubble placement.

Bilquis Evely is a master of line art, creating beautiful panels almost with ease. There’s such a variety in what she manages to draw in terms of backgrounds as this issue moves from planet to planet. There are fields of green with brown mounds for the many graves that needed digging; dark gray crags for rocky planets to convey the harshness of the environment and the few survivors of the area; a city that reaches high into the sky and past the clouds with destroyed statues covered in blood; and even a beautiful area resembling a bog with a building of intricate detail.

These environments only help to contribute to wonderful feats of Supergirl’s abilities where Evely is able to convey her speed as she buries bodies with a flurry of wavy lines going in many directions around the field. She’s able to show Supergirl’s strength as she trains one of the last survivors of a planet and is smashed through the ground repeatedly. There is also a particular instance where Supergirl’s anguish is so strong that she dashes into a nearby sun and we watch as she lies in it, crying. It’s a beautiful set of images in a book that is nothing but beautiful all over. 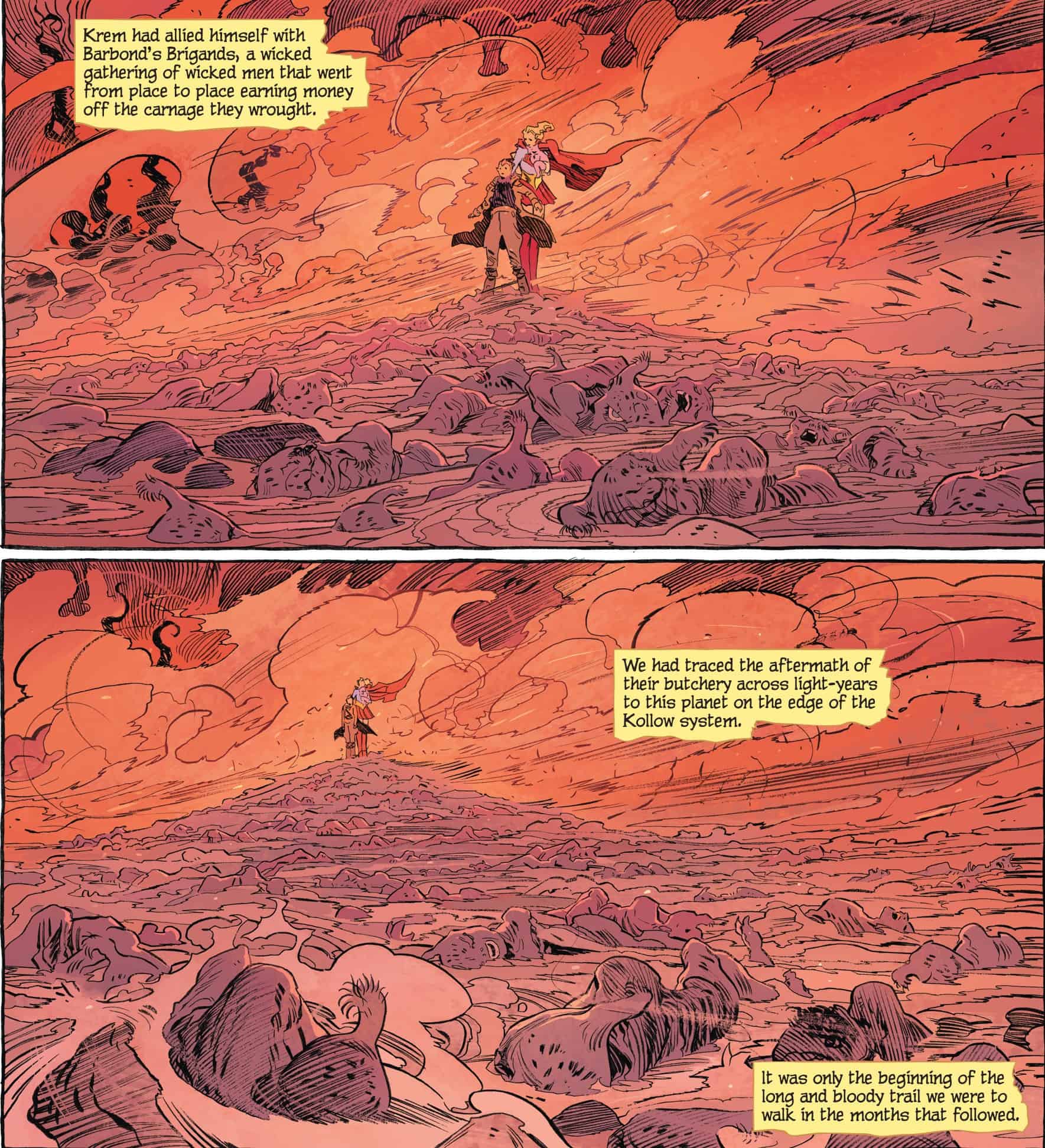 Matheus Lopes does an amazing job of conveying the emotion of each of these scenes through his amazing use of colors to accentuate the art. Color is, of course, one of the major things that makes a comic stand out to readers. If color is bland, then it will turn readers off quicker than bad writing will, so thank goodness this book is fantastic on both fronts. Lopes uses a variety of colors throughout this book for each of the different environments. On the first planet, Parnatt, Lopes shows the utter destruction and despair of a planet by coating it in a red tint almost as if the blood of the people has spread through to the very dirt that storms over Supergirl and Ruthye. Another planet, Tilluis, uses more natural colors; standard greens and browns to convey that with so many people dead, the people have to acknowledge that it happened as part of everyday life and that they have to continue on strong in the face of so much death.

The planet Urrralann resembles something that Jack Kirby may have come up with during his time with a lime green background and stipples throughout the background. It’s possibly my personal second favorite set of pages in the story – right next to the beautifully colored pages of Supergirl resting in the bright oranges of the sun that Supergirl decides to scream and cry into. In particular, they sell just how red hot her fury is and makes me think back to the era of Supergirl as a Red Lantern. Lopes does a great job of linking thematic elements to his use of colors and that helps to sell how important the girl’s mission is.

Clayton Cowles has an amazing pedigree as possibly one of the best letterers of the modern day. His placement of word balloons is always astoundingly well done. They always accentuate the page and make sure to show off the amazing art that they stand beside. His use of sound effects also actually made me laugh during this issue as one of the Brigands is captured and publicly stoned to death with CRACKs appearing in every area where a stone breaks his bones and painfully kills him. Cowles is a master at what he does and it’s his work that ultimately makes this a fantastic reading experience.

King, Evely, Lopes and Cowles have found a way to make me excitedly anticipate heartache! With such an intriguing story, it’s a wonder to what lengths Supergirl and Ruthye will go to to catch this madman and as long as the art stays as amazing as it is, then series could end up being a low-key classic!

Supergirl: Woman of Tomorrow #4 – A Lesson in Pain