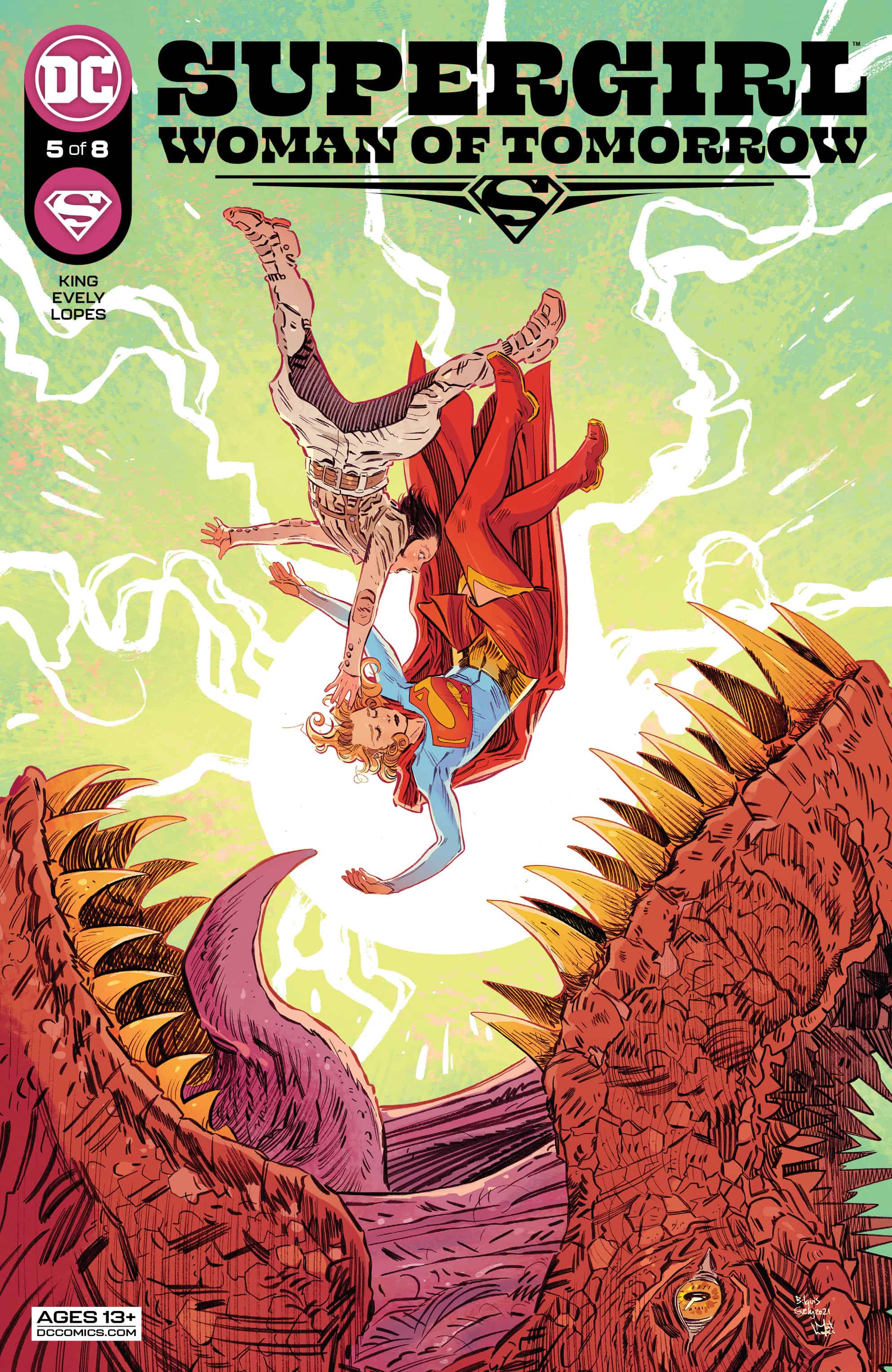 Hot on the heels of the villainous Krem, our heroes, Supergirl and Ruthye find themselves transported to a planet where Ruthye has to take up the sword to protect a weakened Supergirl. Will they survive the harrowing experience?

Supergirl doesn’t often get the respect that she deserves. 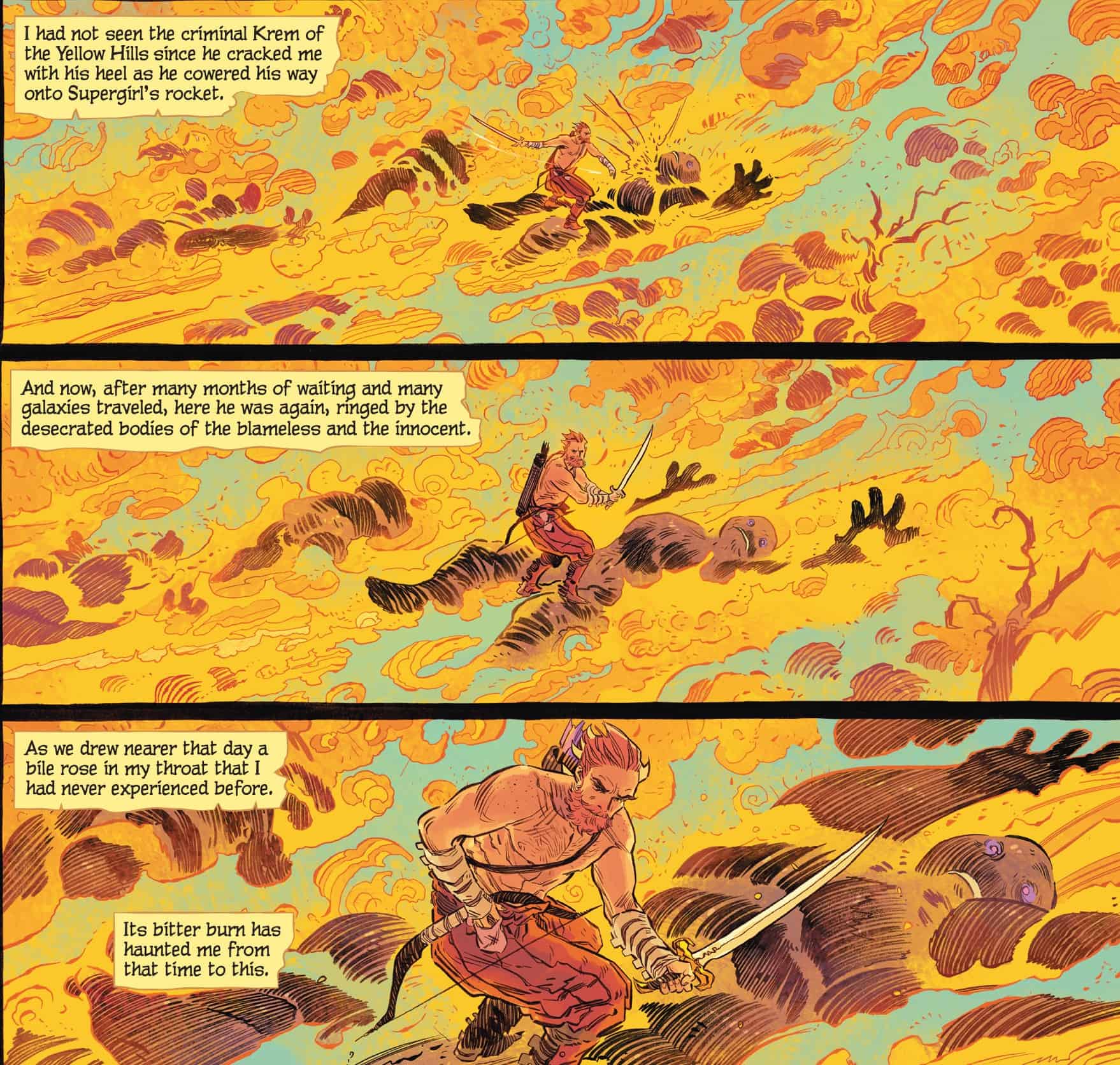 Always considered secondary to Superman, Kara Zor-El doesn’t often get thrown into the conversation of DC’s most powerful superheroes even though she is a part of the Super-Family. While ultimately Superman did come out on top in the few fights they’ve had (see The Supergirl from Krypton (2004) and Supergirl #1 (2011)), Kara has shown the ability to at least stand toe-to-toe with her cousin for a short while. This issue may add another layer to the idea that Supergirl may be stronger than we realize as Tom King seeks to show that she can survive harsher conditions for longer than her cousin.

Supergirl is shown to be powerful while being completely helpless and powerless as she and Ruthye are transported to a planet with a Green Sun by the villainous Krem. The planet immediately begins to sap Supergirl’s strength and power, gradually making her so weak to the point where she can no longer move. Supergirl recognizes the planet and says that Superman was trapped there for 45 minutes before the Justice League came to rescue him. Supergirl describes his condition as being terrible and that he was near death, so readers are left to assume the worst when we discover that she has to survive for ten whole hours.

While Kara is incapacitated, Ruthye acts as the actual star of the issue, carrying Supergirl like she’s been carried through the series so far and King does a very good job of giving her good solo character moments.One such moment is when a giant, dinosaur-like creature comes upon them as Supergirl is passed out and Ruthye has to overcome her fear to kill the creature. More than being a simple revenge story, Tom King has made this book into a coming of age story for both Ruthye and Supergirl as they both grow and take care of each other at their lowest points. And somehow, this has been one of King’s best stories for how consistent the tone has been. 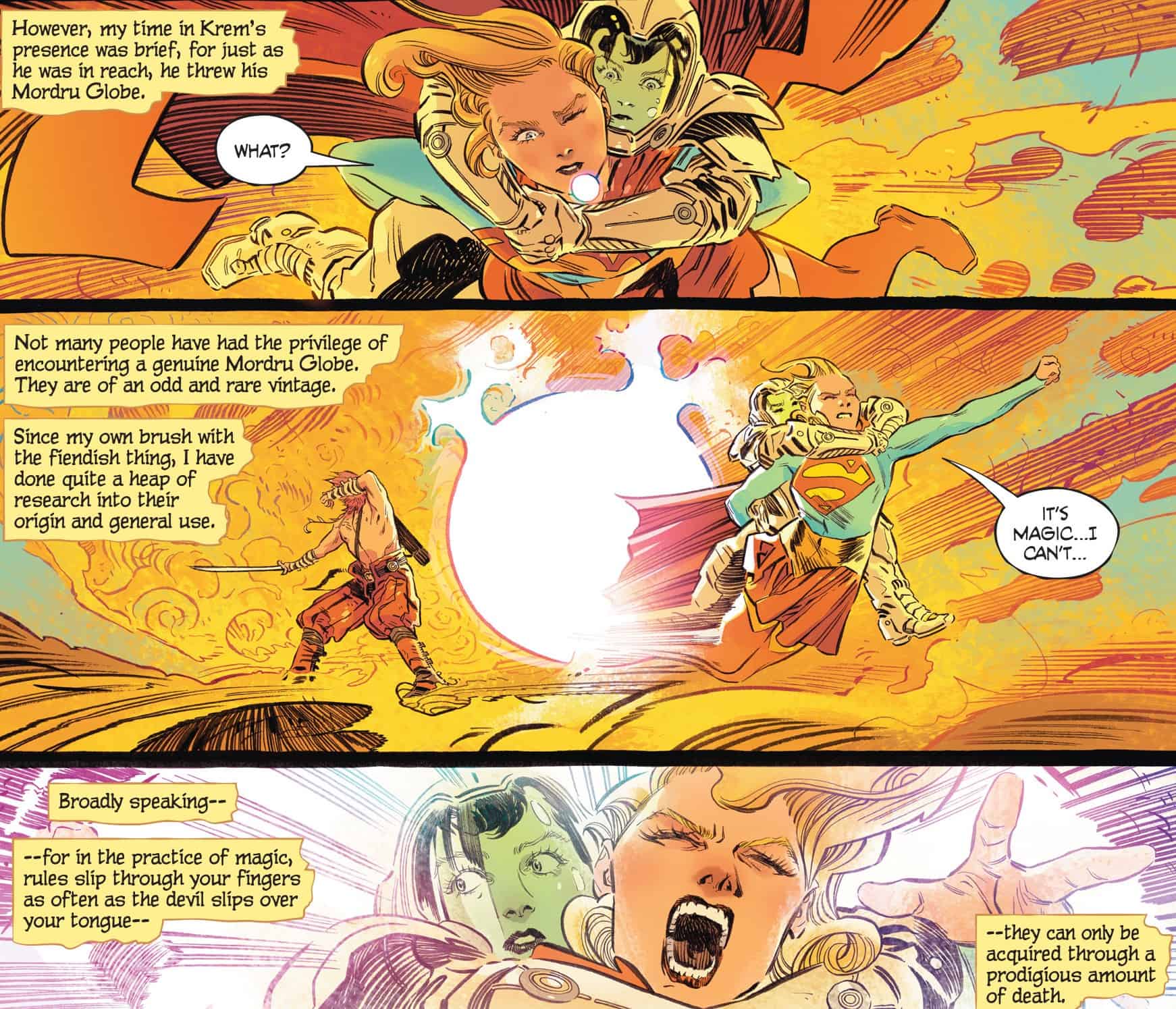 I love that the dynamic between Ruthye and Supergirl is flipped on it’s head with Supergirl being pig-headed about trying to continue on in her ragged state and Ruthye has to be the grown caring for this sickened adult. It’s in stark contrast to her own obstinance which has put her and Supergirl in danger because she steadfastly goes forward with revenge as her plan instead of thinking. This issue forces her to wait for a tactical advantage because Supergirl is incapacitated and also acts as a counter to the constant argument that Super-people have no weaknesses or problems because they’re nigh-invincible.

Bilquis Evely and Matheus Lopes art and colors remain beautiful and really showcase what they can accomplish with an issue that takes place in mostly a single area.

Bilquis Evely is very talented at drawing large, sprawling vistas – it’s something we’ve commented on before in past issues and praised in other stories she’s drawn and that only continues here. The planet of Barenton is, well, mostly barren. There are many open, cragged spaces that seem so vast when set as the backdrop between the many wide and full shots of Ruthye and Supergirl journeying for safety. Evely’s strong lines with hard hatched shading gives the environment a ton of depth and makes everything feel so alive. The dinosaur creatures she draws also feel so terrifying, huge and wildly threatening because of their size in comparison to the tiny Ruthye. 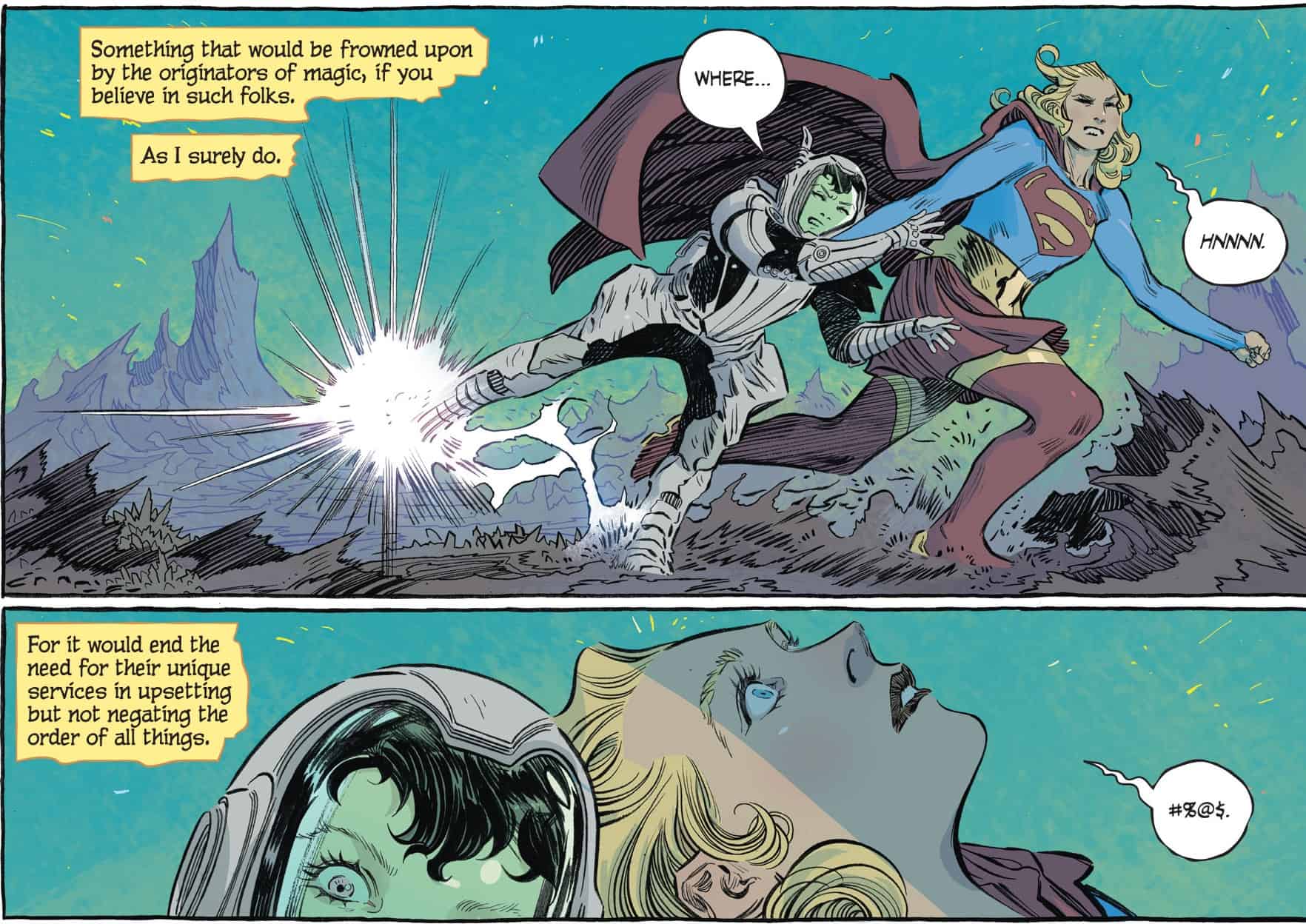 Where Evely shines in this issue, however, is through Supergirl and Ruthye themselves. Supergirl is drawn in such a way that you can feel how tired and drained she is. Even more so than when she was stabbed in the chest in issue #1, the bags in her eyes show how much the green sun radiation is taking her energy from her and when she sits up to protect Ruthye with her heat vision, she looks absolutely ragged with red eyes, messy hair and beads of sweat dripping from her face. Ruthye herself seems a bit tougher than in past issues, standing up to creatures far larger than herself, but never seeming to waver because she has something to protect, even though Evely shows just how much fear she has through the girl’s expressive face.

Lopes shines through his amazing coloring as he’s able to vary up the colors used as the locations and time of day varies through the issue. In the beginning, Supergirl and Ruthye catch up to Krem on a planet of fire and Lopes’ oranges, yellows and the contrasting sky blues capture the sheer heat of the area. When the pair of main characters arrive on Barenton, the colors resemble that of a desert, full of browns and a neon green for the color of the sun. 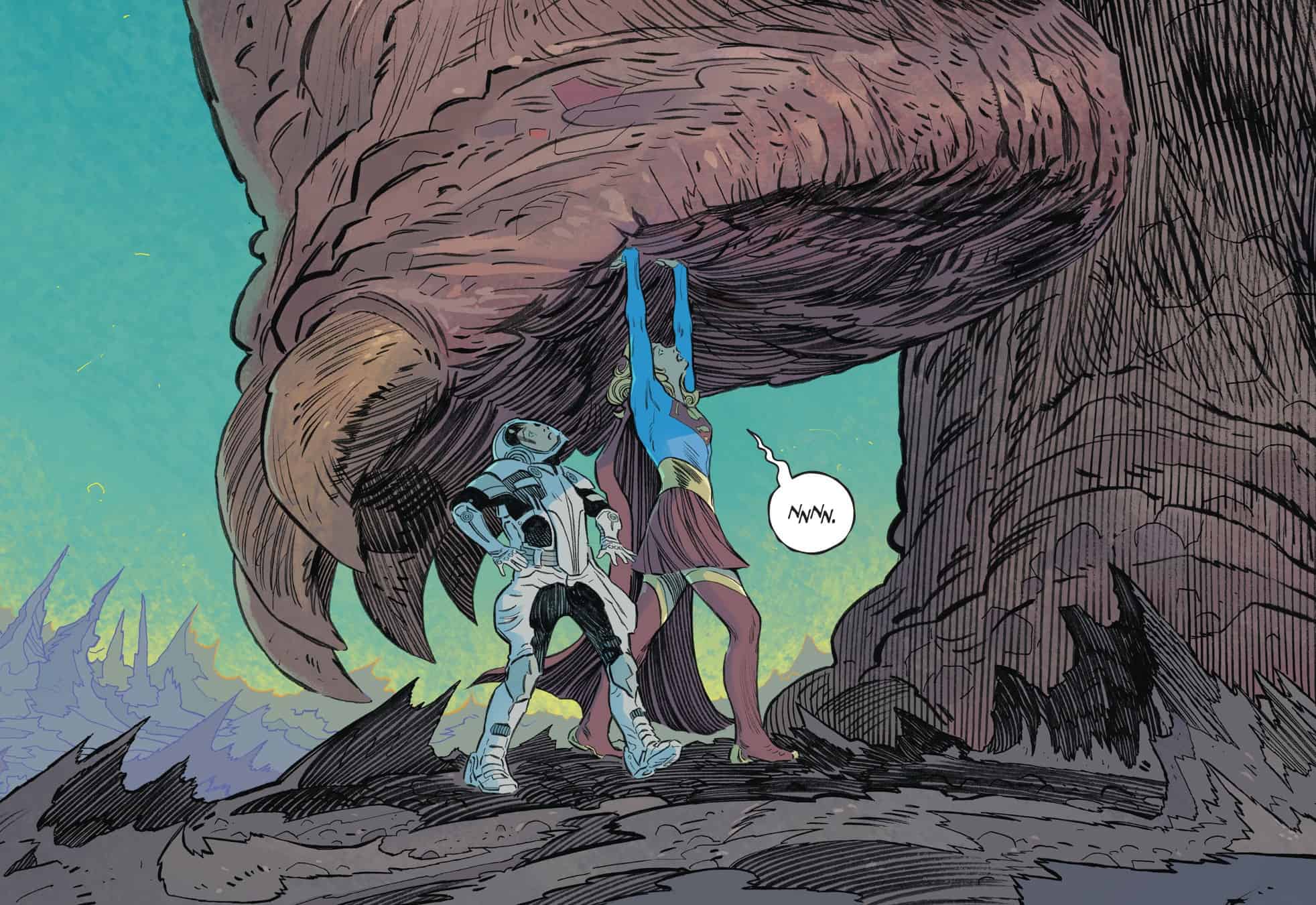 As the sun moves through its daily positions, the sky transitions from a reddish-orange color, to a yellow, various shades of green for most of the issue and then the reverse order as the sun gives way to night. It’s absolutely beautiful and stunning to see as he was possibly the best colorist for this book. And that doesn’t even mention his excellent use of dark oranges for the backgrounds of action-heavy panels.

And finally, Clayton Cowles absolutely smashes the lettering in this book. His placements have always been great, not only for word balloons and thought boxes, but also for his sound effects. Sound effects are always something I harp on when it comes to making a book great and Cowles makes excellent use of empty space on a page to convey the size of an animal’s STOMPs, the cacophonous nature of a group of pterodactyls CAWing and the intensity of big dinosaur ROARS one of them even takes up the entire length of a panel.

As a full package, this might be one of the best issues of this series. Tom King, Bilquis Evely, Matheus Lopes and Clayton Cowles have not disappointed with this series and mark my words, this will become one of the definitive Supergirl stories. With excellent writing, art and lettering, this issue is a slam dunk.