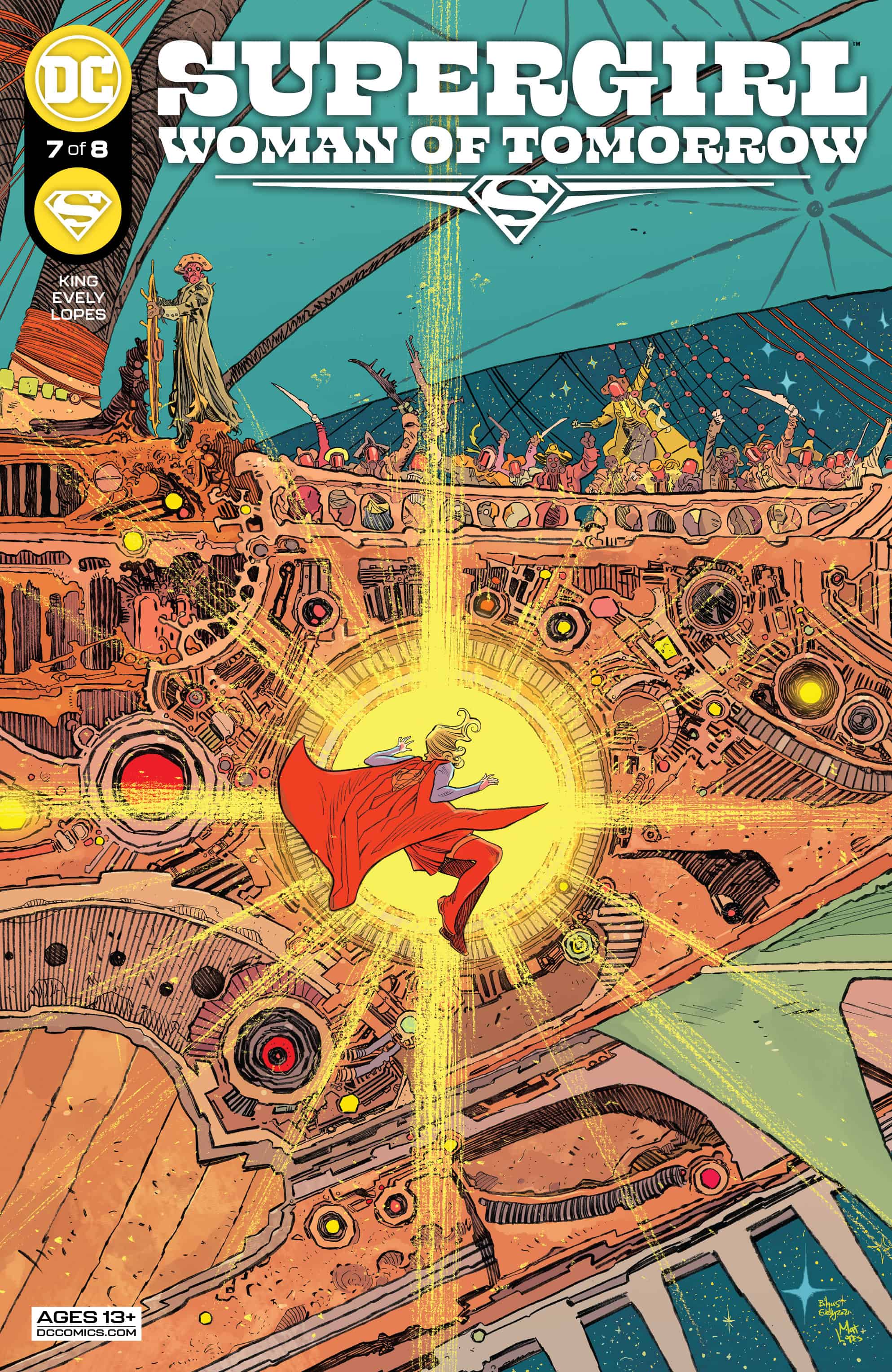 With Krem finally in their custody and a cadre of brigands on their tail, will Supergirl and Ruthye finally bring the dastardly villain to justice or will their crusade for revenge tear them apart right before the end of their hard fought journey?

This has been a revenge story from the very start. 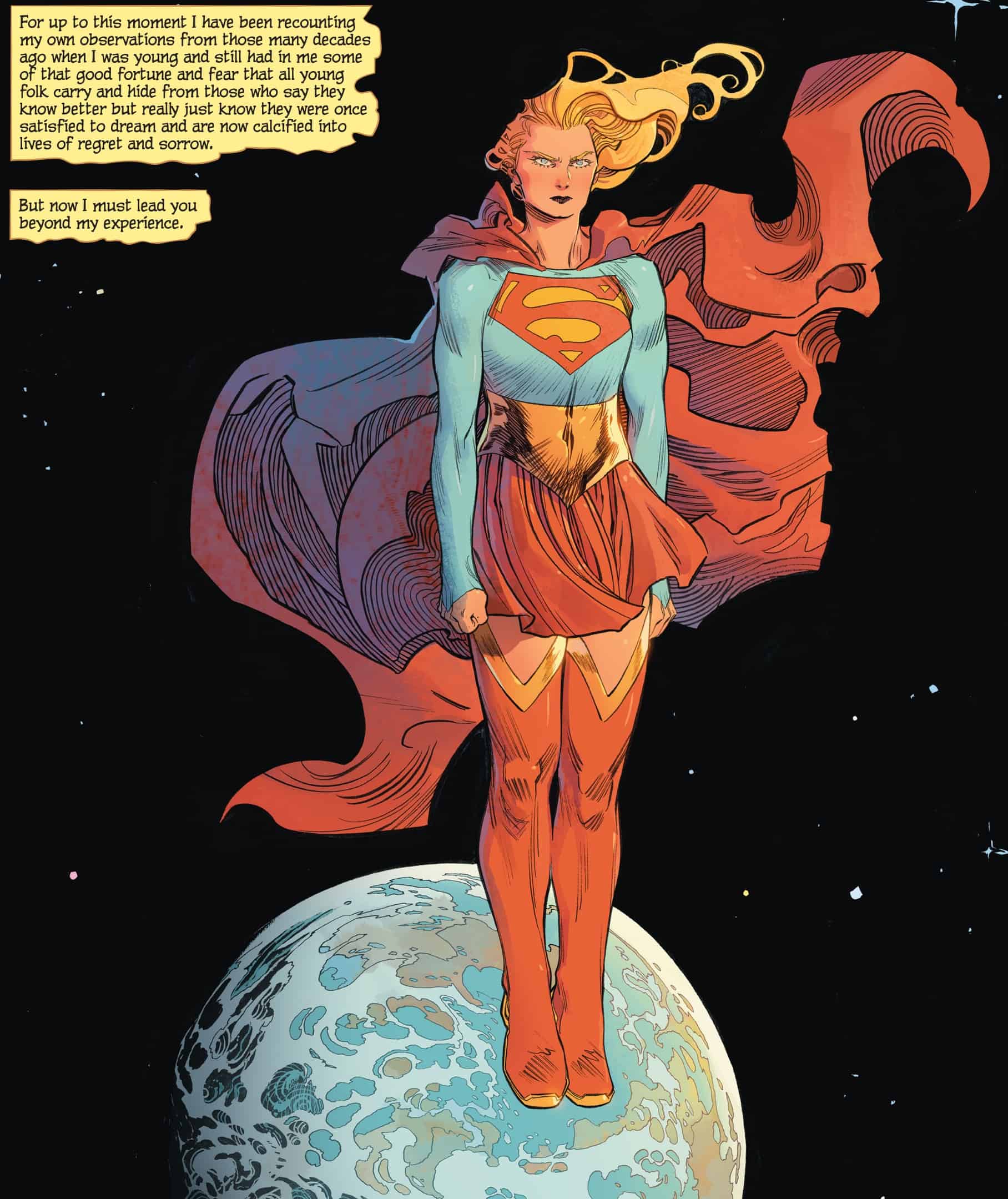 Ruthye set out on her quest to take revenge on the man who killed her beloved father, shrouding her heart in hatred and a sense of duty to her family. Supergirl is then dragged into the crusade because the villain injured and poisoned Krypto the Superdog, making the duo a reluctant team on the heels of the supposedly evil Krem. Throughout the story we are given background on events from Ruthye’s future self, but there’s always been this feeling of melancholy and rage in her narration that usually comes from losing oneself to revenge and regret.

Tom King has done a very good job on the front end, showing just how unrelenting Ruthye is in regards to her hunt for this monster and still characterizing her as a kid at heart, but hasn’t done the best job of fleshing out Krem until this issue. Up until this point, Krem has just seemed like a cartoon villain, doing evil just for the sake of it – he’s destroyed towns, murdered people, antagonized Supergirl and Ruthye at every turn, but in his moment of vulnerability we finally learn why. In the very first issue, Ruthye theorized that Krem was an agent of the King meant to test their loyalty and the villain confirms that to be the case, but says that he killed the girl’s father because his zeal and loyalty to the King outmatched Krem’s own. It made him feel like a worthless dog, so he became one out of spite. 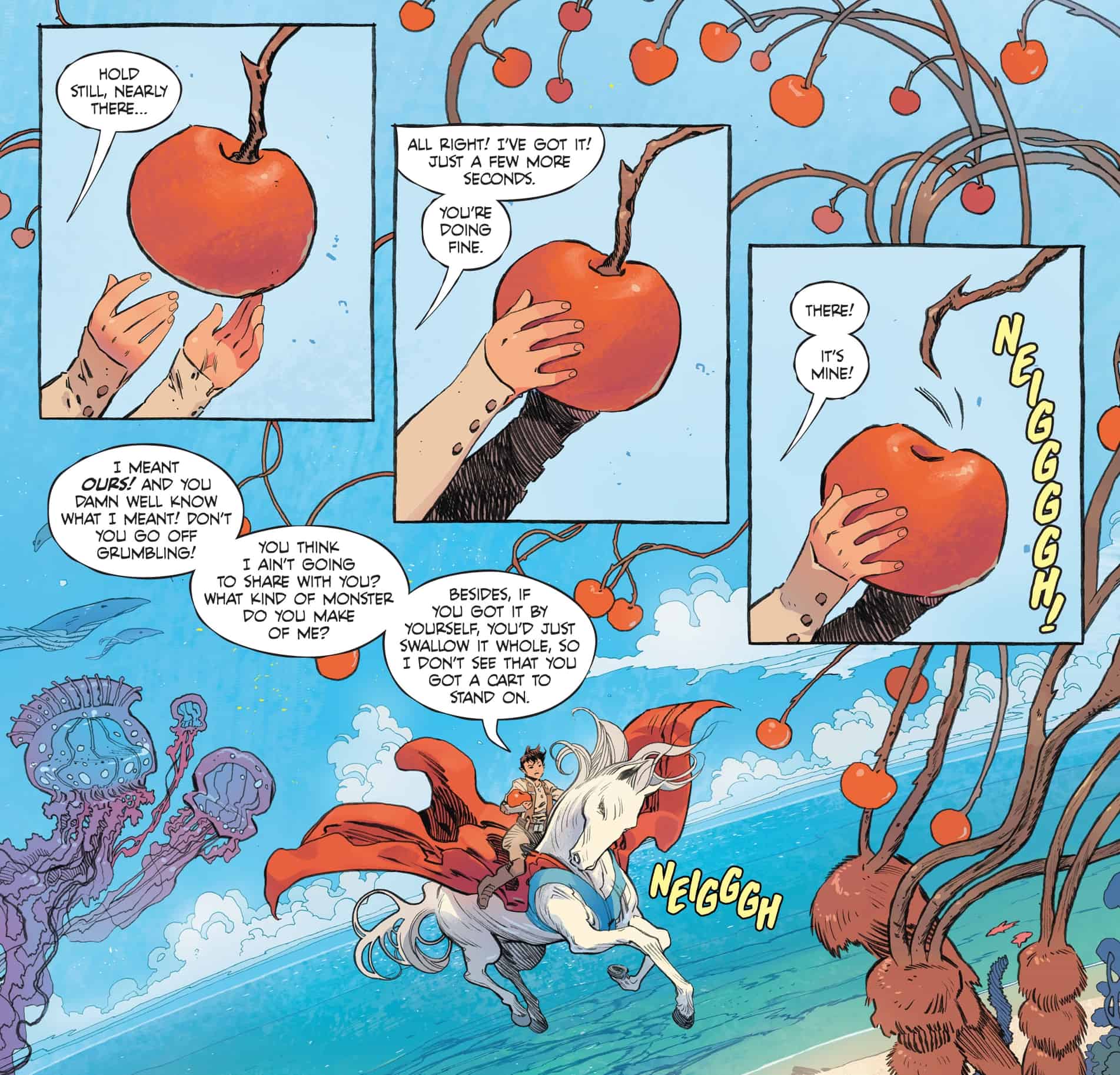 And this would have been great motivation if we had just a bit of it peppered in throughout the story, but in this penultimate issue it doesn’t feel as impactful as it could have been. Krem isn’t given any redeeming factors aside from being a man of duty and maybe that’s the point to show how twisted and angry a person like Ruthye can become when motivated by revenge, but it feels hollow when the man has committed nothing but atrocities for six issues before this. And with the final page stinger, I can’t help but wonder if Ruthye isn’t a small monster herself as she seems to throw away everything she’s learned from Supergirl throughout their journey together.

Of course, a comic is nothing without it’s talented art team and once again Bilquis Evely, Matheus Lopes and Clayton Cowles pull off yet another amazing effort in this book. 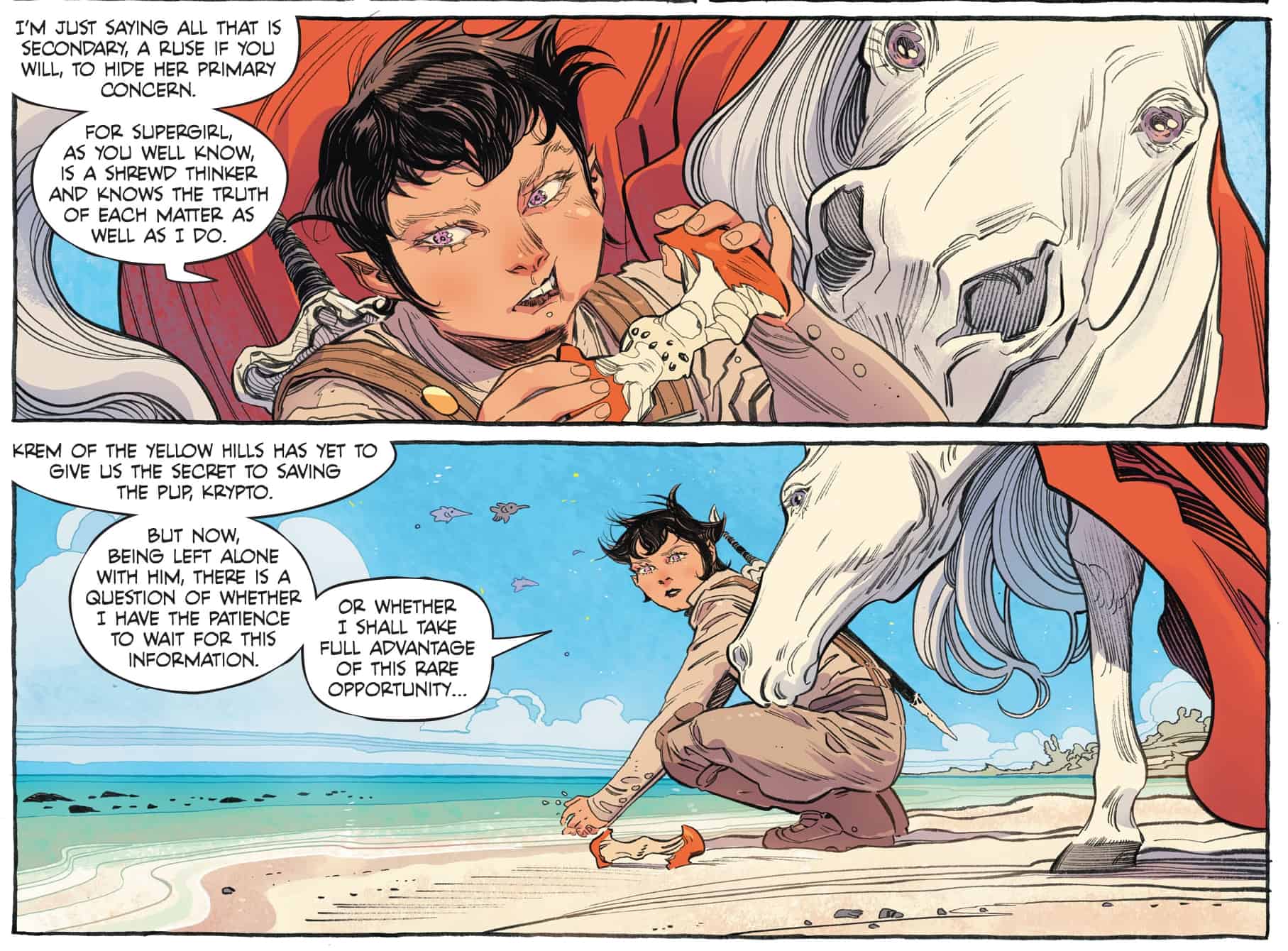 Bilquis Evely has this wonderful way of capturing contrast in a story. While Ruthye, Comet and Krem are on this beachlike environment for half of the story, Supergirl is up in space fighting for their lives against an entire ship full of pirates. The planet scenes are calm and serene with foliage swaying in the background and even Ruthye is chill in the face of a bound Krem, but the scenes in space are hectic, fraught with cannon fire and combat. Supergirl’s facial expressions are rife with determination and pain as she goes back and forth with the pirates, eventually being captured by them, showing that even though she’s as powerful as her cousin, she’s still vulnerable to the numbers game.

Matheus Lopes further lifts the art with his fantastic coloring. The planet scenes feel serene thanks to the light blue skies, soft white clouds, blue-green water. The environment feels like a tropical beach, albeit with aquatic creatures floating in the skyline and makes readers feel like Ruthye is finally safe and that nothing can ruin her victory over Krem. On the other hand, the space scenes are chaotic with the bright oranges of cannon fire pluming all around Supergirl and the blackness of space surrounding everything. These scenes have a sense of palpable danger as flashes of yellow coat backgrounds, giving Supergirl a sense of fear that she may not be able to overcome the sheer volume of villains around her. Lopes easily captures emotions and draws eyes with each color choice. 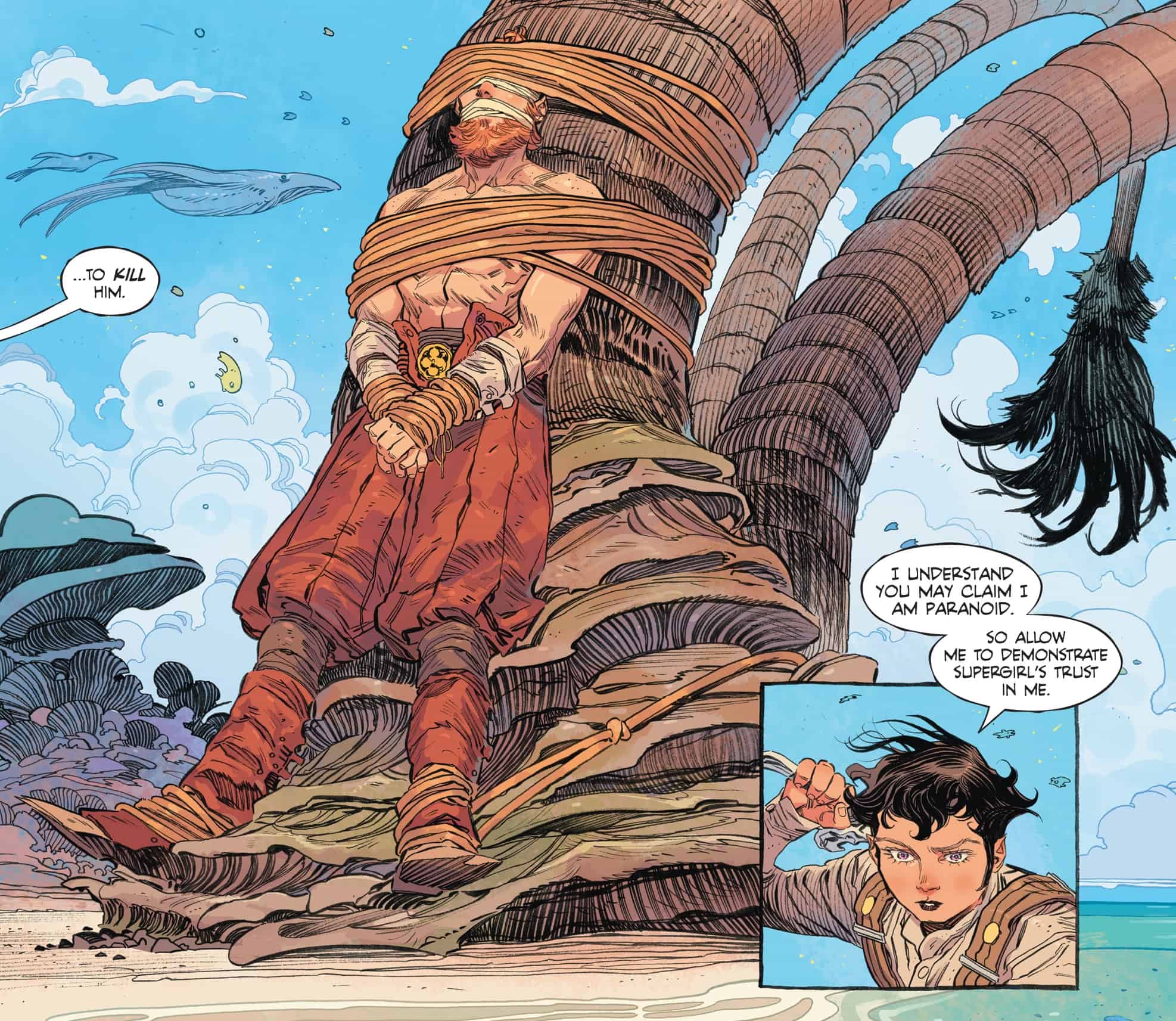 And much like the last issue, Clayton Cowles word balloons and narrative captions remain excellently placed. Because half of the story is without dialogue, Cowles does well with Ruthye’s narration, placing the thoughts in the corners and other empty spaces so as to not obscure the art or to enhance pages. They are very prevalent and only get overwhelming when there are rather large monologues unbroken between two smaller captions. Otherwise they do their job very well.

While this issue has its fair share of flaws, it still does a very good job of conveying its two central messages: Revenge can leave you empty, and even those with power can face defeat. Tom King, Bilquis Evely, Matheus Lopes and Clayton Cowles have produced an almost masterpiece, so we can only hope that its upcoming finale can wrap everything up very nicely.