Supergirl: Woman of Tomorrow #8 – The Sword Comes Down 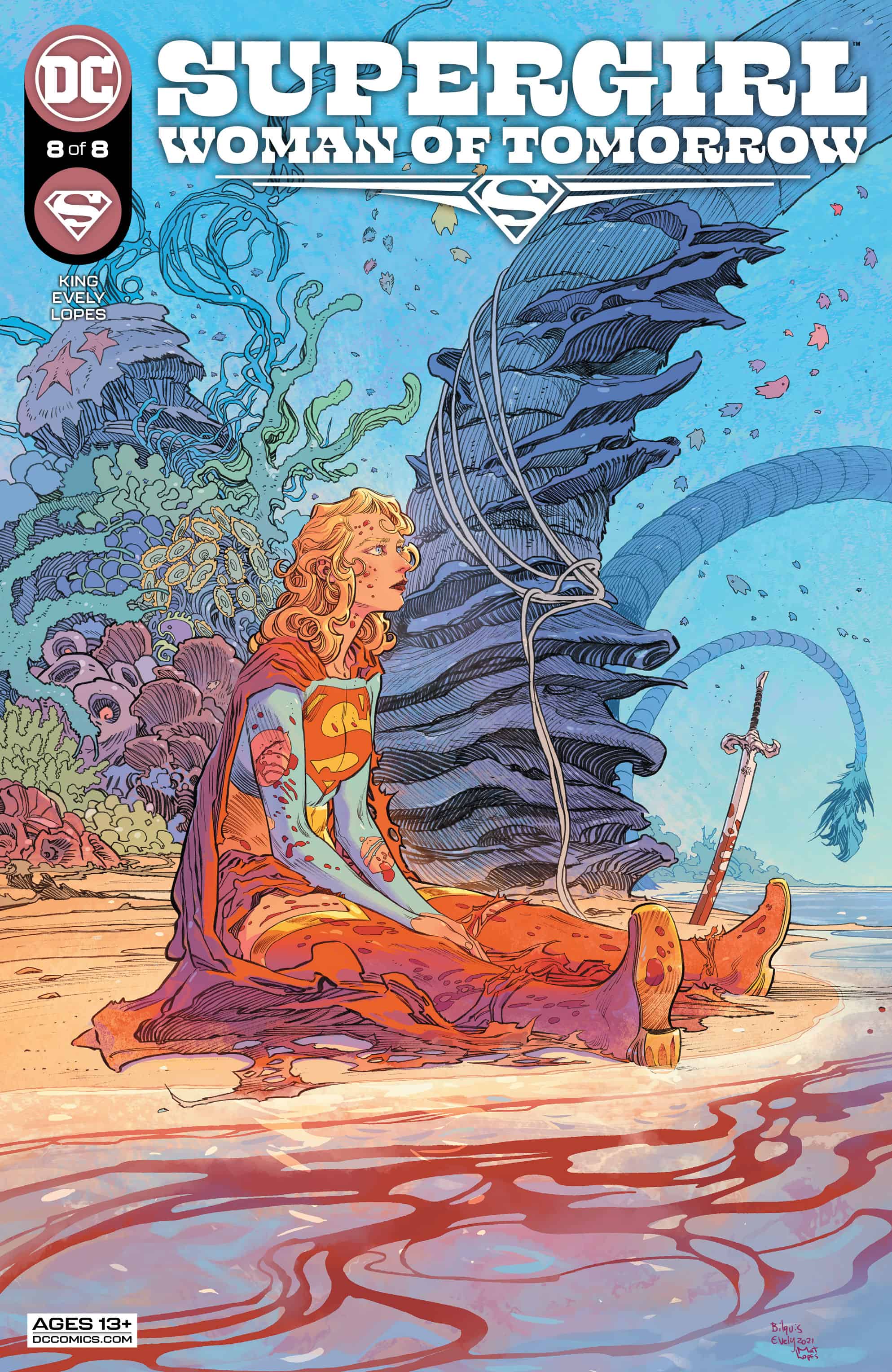 It’s the end of the line as Supergirl and Ruthye’s journey reaches its poetic conclusion. Can Supergirl survive the onslaught of brigands that have captured her and will Ruthye finally find some measure of closure from the man who murdered her father?

This story was absolutely beautiful from top to bottom. 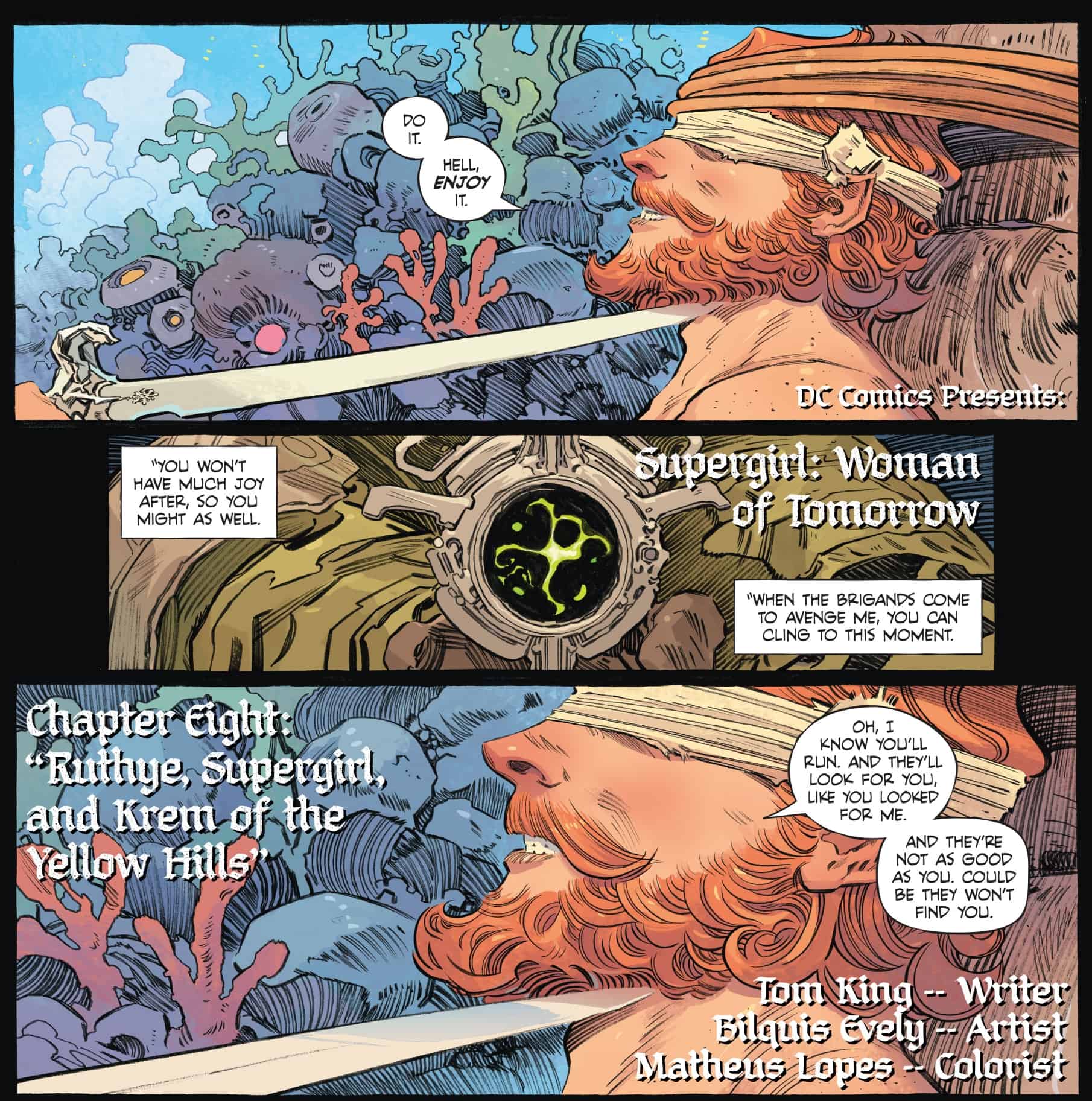 With characters like Wonder Woman, Batman and Superman, fans have expectations of how these characters are supposed to behave and what kind of stories can be told with them, leading to a lot of anger when things aren’t done the “right” way with them. Where Tom King succeeds with characters like Mister Miracle or Adam Strange is that he finds a way to deconstruct their very nature and reinvent them or further uplift their characters. That’s exactly what he’s done here with Supergirl.

Throughout the entirety of the story, Supergirl has been trying to show Ruthye that revenge isn’t the path that she should take, even against an amoral psychopath like Krem. Over the course of seven issues, we see as Ruthye’s walls are broken down and Supergirl’s influence works its way into her character and those lessons become paramount to the climax of this book. But what Tom King does especially well is flipping their characterizations –  as Supergirl is broken down repeatedly by the violence and death left in Krem’s wake the darkness starts to creep into her heart, marking the moment where Ruthye has to save Supergirl like she’s been saved the entire series. 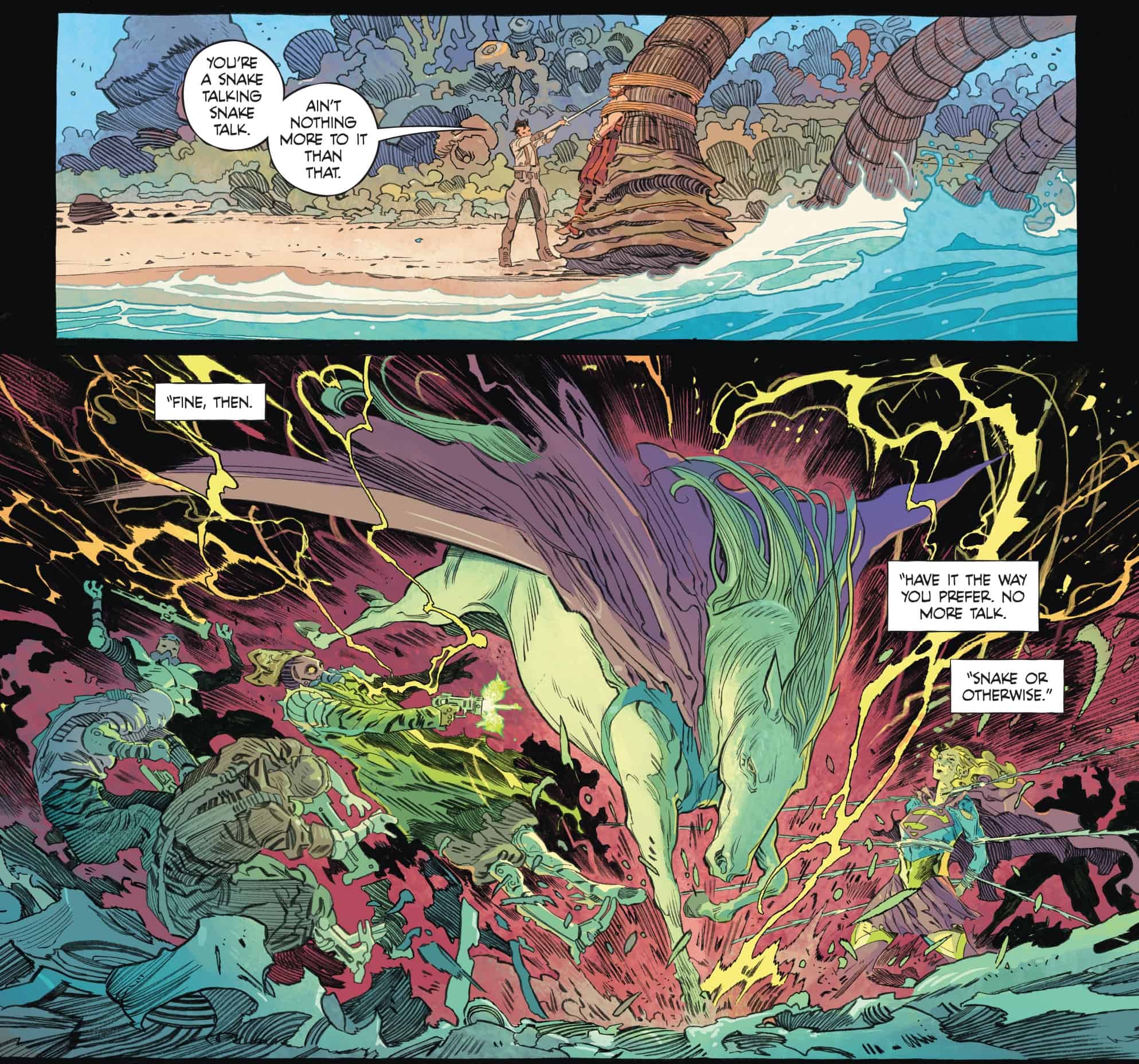 This entire book couldn’t have possibly been done without the amazing art from Bilquis Evely, Matheus Lopes on color and Clayton Cowles’ lettering.

Evely played a heavy hand in bringing this book up from pretty good to absolutely amazing. With every stroke of her pen, she helped to weave this tale of revenge, honor and friendship between Ruthye and Supergirl. I would say that I especially enjoyed  the final fight between Ruthye and Krem – with Ruthye wanting to stand on equal footing with the villain, she unties him and they have a knockdown, drag-out fight with each other and it is glorious. Evely draws these scenes with a sense of artistry that doesn’t betray the brutal and quick nature of a real fight. Ruthye repeatedly kicks Krem in the face, not like a trained combatant, but like a child that’s doing her best against a bigger and stronger adult. Evely’s speed lines sell the swiftness of the kicks and Krem’s twisted face make the impacts look even more painful as the wide boots connect with his face. 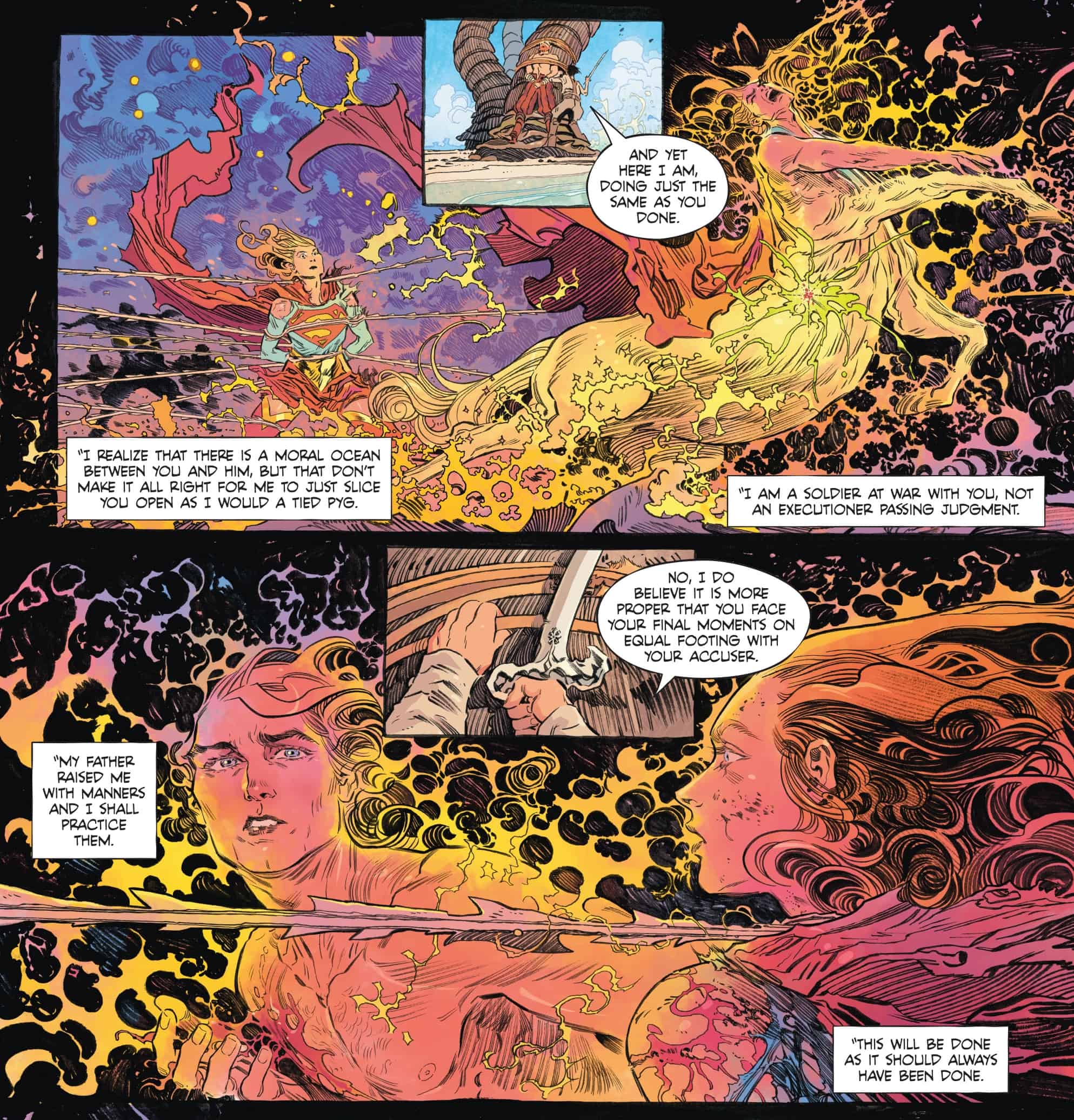 But no other scene in the book had the same resonance as the climax of the book. With Supergirl’s eyes dead from the losses suffered over the course of the story, Evely draws her with her costume torn to shreds, bloody, eyes looking dead and tired and shows Ruthye with a concerned expression, afraid of the monster that she’s almost created. They way that Evely pulls her shots in closer and closer as the tragedy of what Supergirl threatens to do to Krem looms and builds a sense of unease and anxiety. It’s a powerful few pages that really shows how far both characters have come from where they started.

Lopes Colors only help to make these pages even more beautiful to look at. While there’s not much in the way of interesting locations to experiment with different color schemes like in the last few issues, what Lopes accomplishes with the beach setting is still nothing short of amazing. The cool blues of the sky combined with the flowing whites of the clouds and crashing of the blue-green sea made the backgrounds a wonder to look at. During points of very intense action, Lopes employs yellows for backgrounds, likely symbolizing Ruthye’s ego for thinking that she can take on Krem in a fist fight and then later madness when she bites a chunk out of his arm to make him release his sword. But the best use of his colors comes towards the end when we return to Ruthye’s planet and watch as the red sun rises on her in old age, showing the courage that she’s maintained over the course of her journey, especially by standing by Supergirl to ensure that she maintained her ideals. 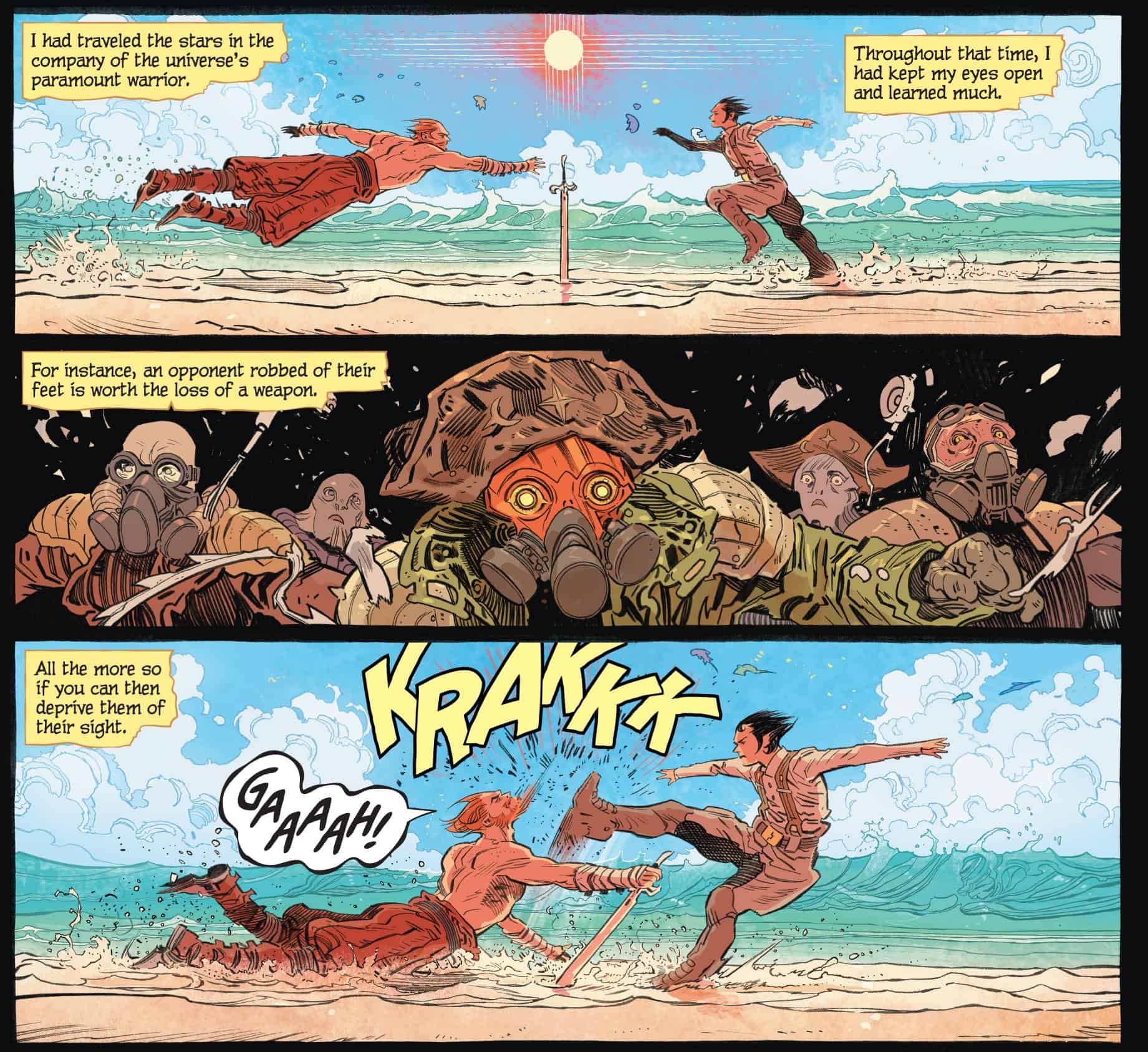 And no comic can succeed without an awesome letterer and Clayton Cowles did his job as well as always. Ruthye’s narrations in the corners of labels always felt like they were in the perfect place and in the perfect format. Once you learn that they come from a book recalling the adventure, their style makes perfect sense. They look like pages from a diary and remain aesthetically pleasing the entire way through. The same can be said for every single word bubble we get throughout the series. None of them obscure the action and are always additive to the pages.

Without a doubt, I believe this is the best Supergirl story ever told. Tom King, Bilquis Evely, Matheus Lopes and Clayton Cowles have created a masterpiece with Supergirl: Woman of Tomorrow. With beautiful art and masterful writing, one would be remiss to not pick up this series whether in single issue form or when it eventually comes out in graphic novel form!

Supergirl: Woman of Tomorrow #8 – The Sword Comes Down