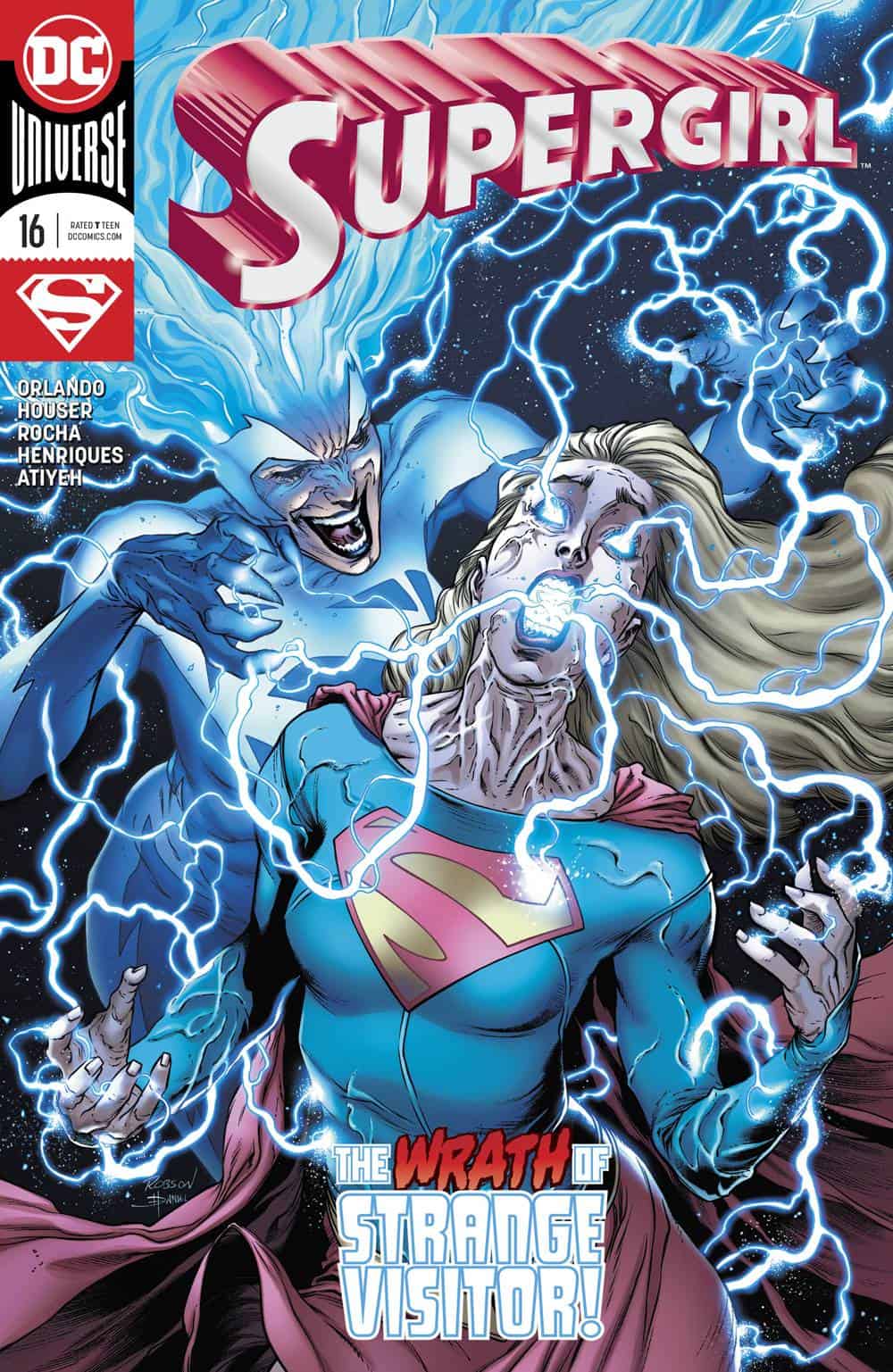 Mister Bones is the new Director of the D.E.O. and he’s got a plan to lure Supergirl into his clutches. And if Strange Visitor won’t do the trick, maybe his other secret weapon will!

Supergirl was at the D.E.O. (Department of Extranormal Operations) with her imprisoned father Zor-El (formerly Cyborg Superman) when the walls came tumbling down and everyone saw her standing beside the man who tried to destroy National City.  Now public opinion in Supergirl’s hometown is split down the middle—half the city hates and fears her while the other still loves her. Super-villain Mister Bones has replaced Cameron Chase as Director of the D.E.O. and his mission is to find the public menace that is Supergirl and imprison her.  However, records of the secret identity the D.E.O. created for her were erased so Bones sends his agents to scour National City and investigate everyone in order to hunt her down.

Sharon Vance AKA Strange Visitor has been brainwashed by Mr. Bones to hate Supergirl and wants to punish her because she brought her back to life against her will years ago.  The new regular art team of Robson Rocha, Daniel Henriques and Michael Atiyah turn in some truly gorgeous pages… 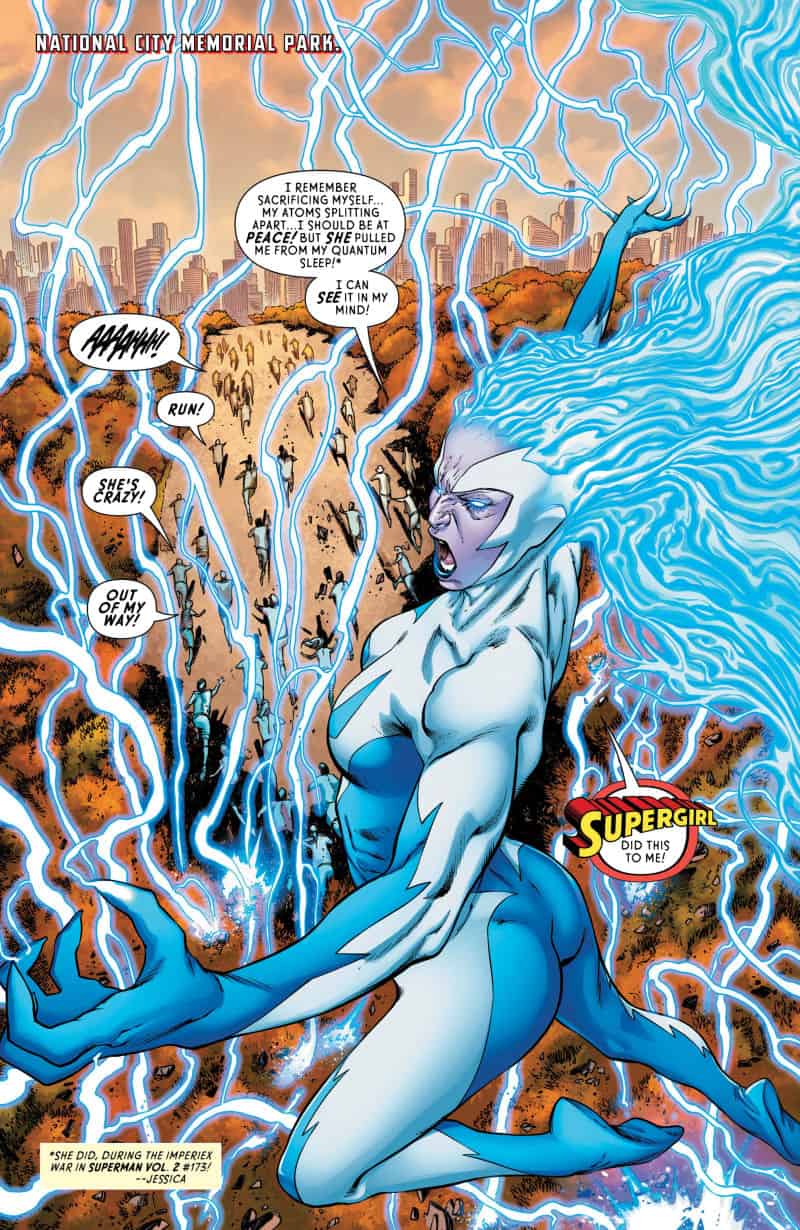 Supergirl AKA Kara Danvers is at home with her adoptive parents, Jeremiah and Eliza, watching Strange Visitor attack National City.  She debates with them about the D.E.O. now that they’re out to capture Supergirl.  They understand her frustrations about trying to keep a low profile when people are in danger but tell her some in the D.E.O. do want to do the right thing.

On television, Kara sees Mr. Mastrocola—a wannabe super-villain she fought in Supergirl #1—confront Strange Visitor in his battle suit.  He says he is now called Insight and he is here to stop her rampage.   She easily punches him down to the ground.  But in 2 beautiful pages of art by Robson, Henriques, and Atiyah, Supergirl shows up to tackle Strange Visitor before she can do further harm… 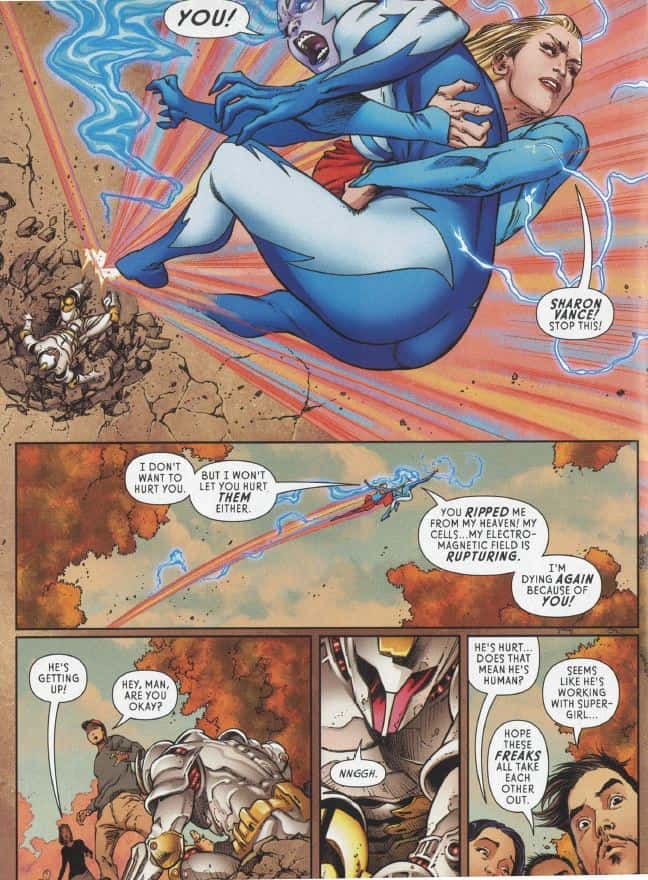 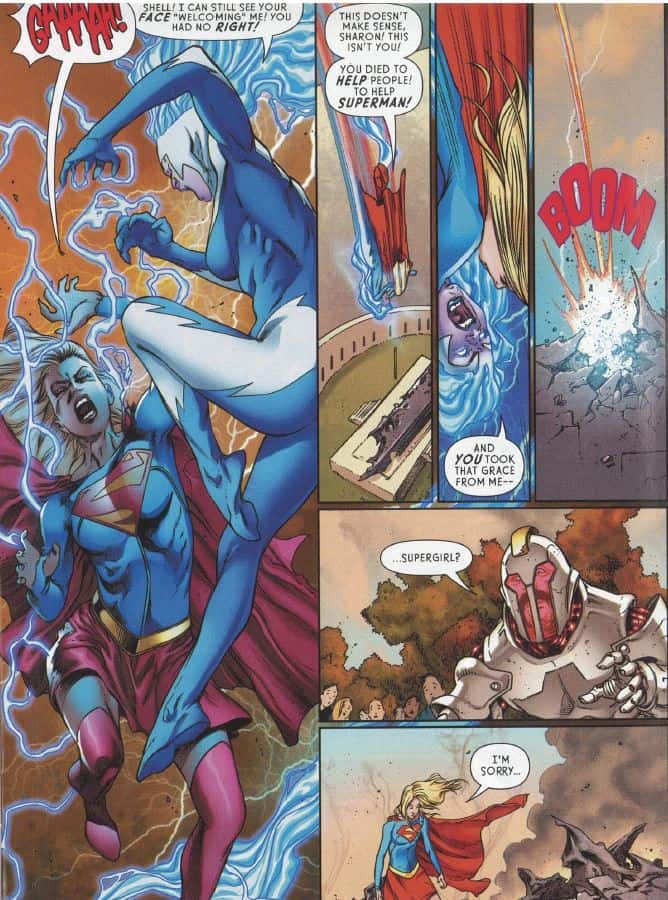 The D.E.O. agents suck Strange Visitor’s energy up and trap her in a magnetic bottle.  They point their guns at Supergirl who tries to reason with them to no avail.  Insight unleashes a flare which blinds them so Supergirl can escape.  Jeremiah and Eliza take Kara to get something to eat as they plead with her to try and find a safer way to act as Supergirl while not falling into the D.E.O.’s trap.

Back at D.E.O. headquarters, the Blade, Mister Bones toys with Insight and Strange Visitor.  Ms. Vance has broken through his brainwashing and threatens him, but Bones warns her he could dematerialize her in an instant.  That’s when he gives orders to his new secret weapon: an alien superwoman named Deceilia who has been brainwashed by Mokkari at Project Cadmus.

Kara now sits in the library at National City Technical High School with her friends Ben Rubel and Belinda Zee.  Belinda is quick to defend Supergirl’s actions and her honor, but Ben thinks Supergirl shouldn’t waste her time protecting the people of National City if they’re going to hate her like they do now.  Kara can tell Ben has a crush on Belinda.

At gym class, one of the D.E.O. agents who are trying to uncover Supergirl’s secret I.D. is suspicious of burns on her arm (which came from fighting Strange Visitor).  Kara hears someone attacking a boat on the lake so she uses her heat vision to set off the fire alarm and runs away in the crowd before the agent can question her further.

When Supergirl gets to the boat, Deceilia starts to strangle her: 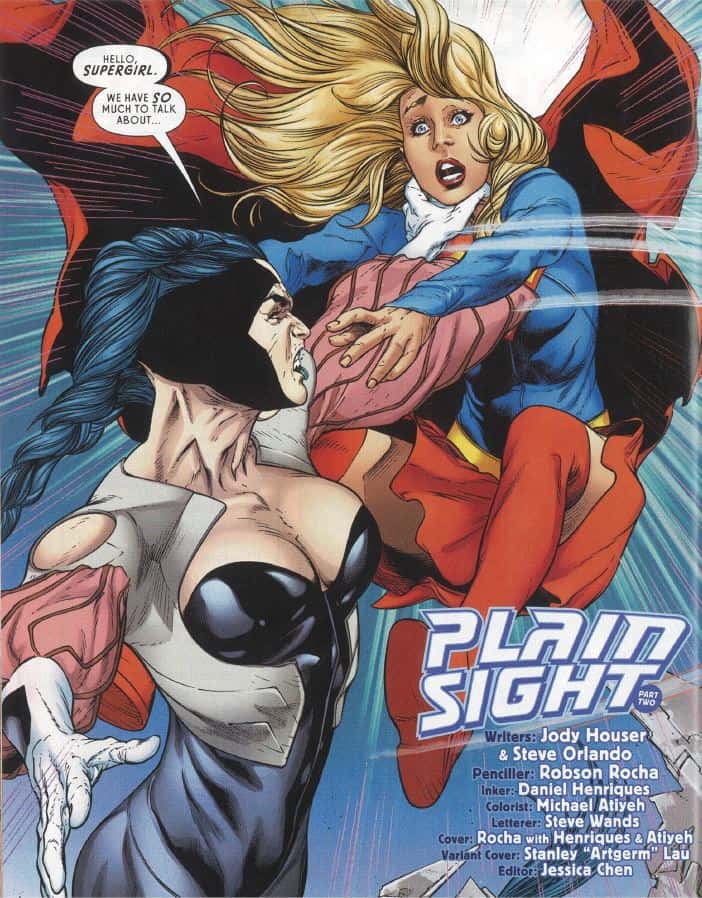 Supergirl is one of DC’s fastest improving books.  This issue was no exception.

Steve Orlando got this volume of the Girl of Steel off to a rousing start last year.  But the addition of Jody Houser as his back-up or co-writer has brought a different tone to the series.  The high school scenes which were once clunky now read more natural with the interactions between Kara and her classmates seeming more like normal teens.  The dialogue doesn’t read as strained or awkward anymore.

Even more welcome is that Kara doesn’t sound as sad or whiny.  Supergirl is still conflicted, but she has more confidence in herself and her judgment.  Her living with Jeremiah and Eliza Danvers has a similar feel to how Jeff Lemire wrote Connor Kent in the last Superboy series.  Kara and her adoptive parents feel more like a real family which is a nice change.

One other element of Orlando’s relaunch of Supergirl is that the villains have been a good match for her.  The fight scenes have been impressive.

I was skeptical when Cameron Chase was fired and replaced by old Infinity, Inc. villain Mister Bones. Surprisingly, though, the transition (which coincided with the change in artists) has gone smoothly.  Though for me the jury is still out on Supergirl being hunted by instead of working for the D.E.O., so far I feel some suspense about where Orlando and Houser are going with this idea. Having a stellar art team that’s taking their book to new visual heights doesn’t hurt either. The scripts have been good or a bit above average for the most part, but the new art team is raising it to an even higher level.

Oh, and let’s not shortchange the breathtaking variant covers from Stanley Artgerm Lau either. They’ve also significantly boosted sales for Supergirl on the Diamond charts.

Final Thought:  Supergirl made a big debut in shops last year, but slowly lost momentum as Brian Ching’s blocky pencils and scratchy inks didn’t win over many fans.  Steve Orlando, though, is one of DC’s brightest rising star writers and he’s kept this book on a steady path.  His co-writing with Jody Houser has made the high school elements more authentic and the relationship with Kara’s adoptive parents rings truer, too.

Top it all off with formidable super-villains, a new deadly status quo with the D.E.O. and breathtaking art on both the covers and the interiors.  And you have one of DC’s most improved books on the market.