Superman #31: You Are the Magnet, And I Am the Steel 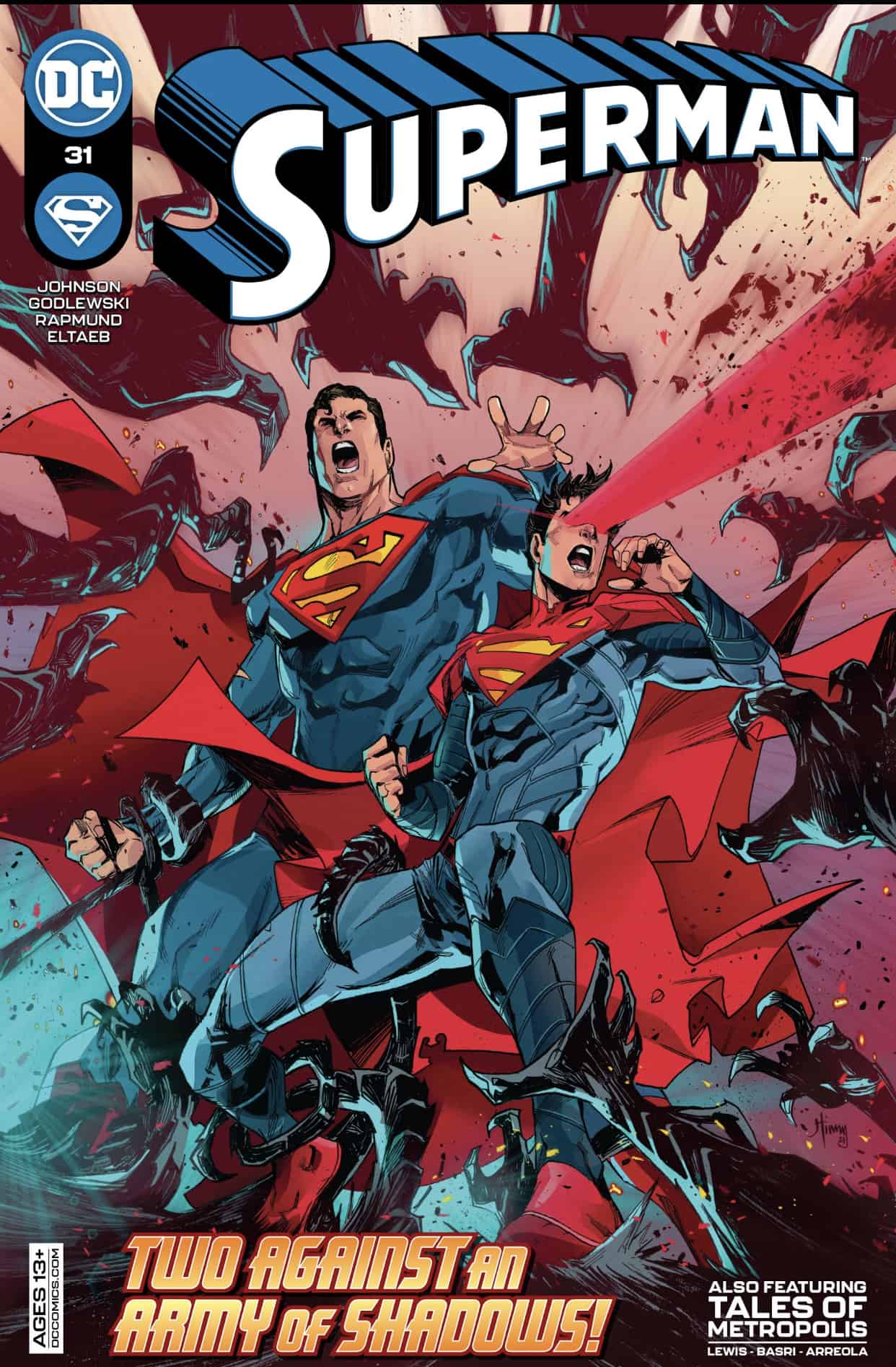 Thought to have been defeated long ago by Superman and his allies, the ancient Shadowbreed have returned in a horrifying new form, and Superman’s oldest ally has been assimilated into their ranks. As Jon and the besieged new Thakkramite leader search for the key that will help them defeat the creatures, Superman returns to the site of his first historic victory over the Shadowbreed in an attempt to warn the Thakkramites of the incoming threat. But Superman’s old allies kept terrible secrets from him, and both he and Jon are more vulnerable against the Shadowbreed than they know. 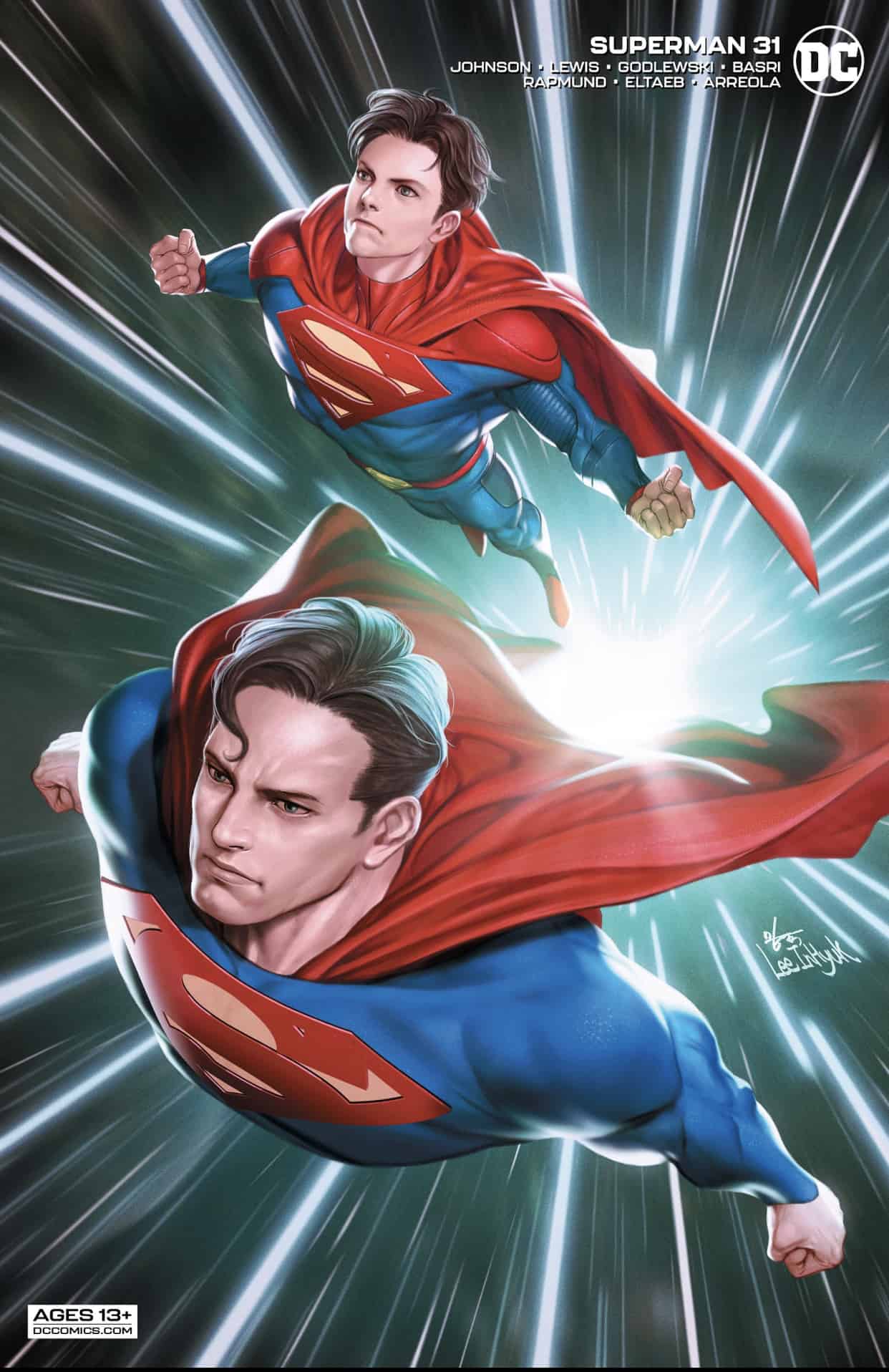 Part two of Phillip Kennedy Johnson’s storyline Clark & Jon’s adventure to save the Thakkramites from the parasitic Shadowbreed, a species of shadows that become a hive mind society of malevolent telepathic conquerors. Think a mix between Marvel’s Shadow King and Unity from Rick & Morty. It’s very clear that the intent is to show that Jon is worthy of the moniker of Superman, and while I’m totally not on board with the idea, I’m giving this creative team the proper respect to tell their story and sell me on the idea. 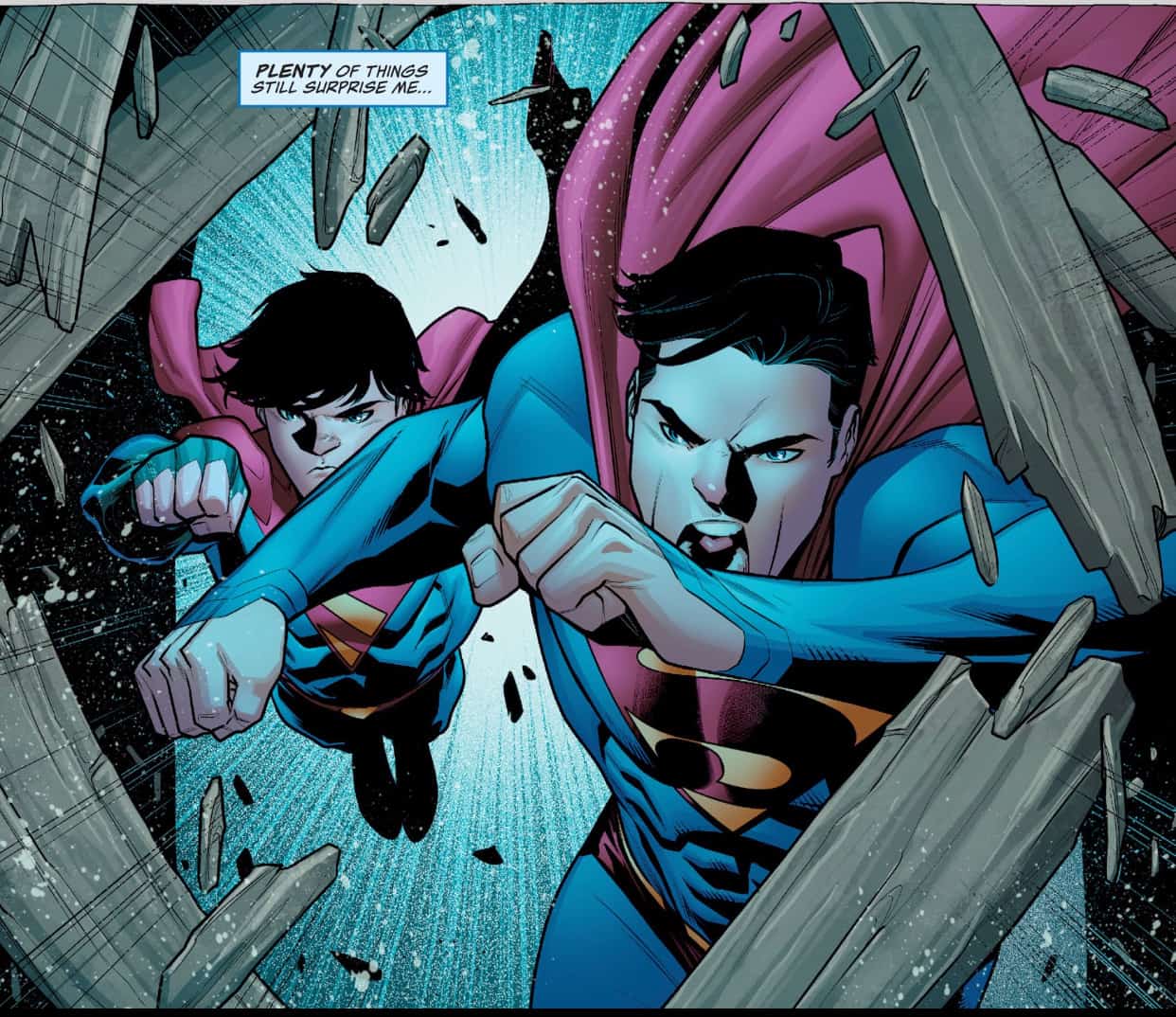 So far I’m not sold on the idea, but it’s to no fault of the writer and artists attached, because the story thus far is enjoyable on its own merits. It reads like a chapter from the Bronze Age of DC, where there’s much talk about the multiverse, and a sense of wonder. PKJ and Godlewski treat us to a very colorful adventure featuring father and son, doing things that Superman is supposed to do: Superman is supposed to represent the best of us. He’s kind for kindness’s sake. Not because he has to, but because he is. While Godlewski’s art is quite nice. I’m glad to see his work on this book, especially with his depiction of both Clark and Jon, but also the citizens of Thakkram, and the Shadowbreed. My biggest quibble regarding the art has more to do with the lack of a civilization. We see people, and the inside of a couple structures, but for the most part the planet is a wasteland. 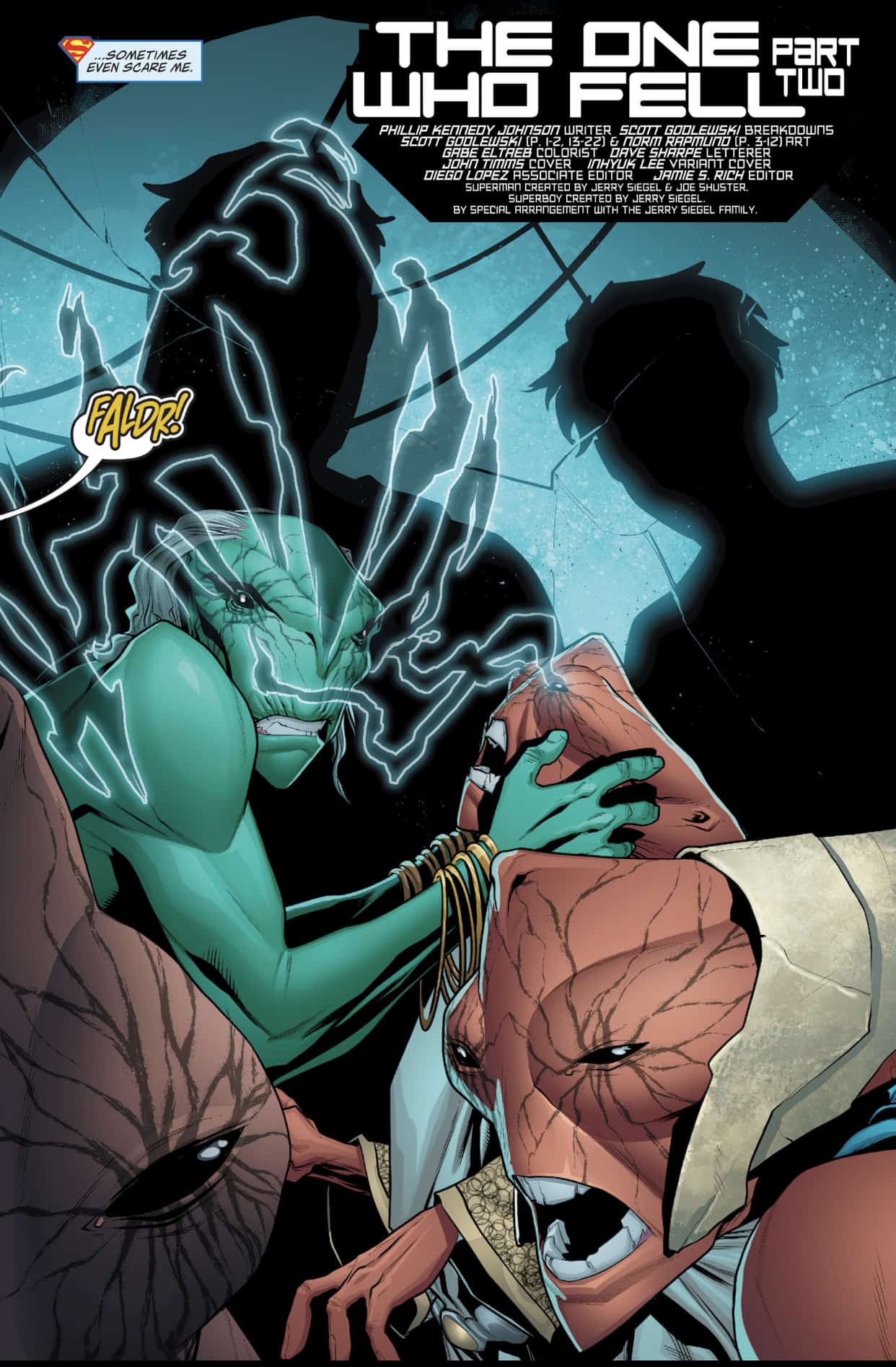 My apprehension has more to do with the rushed execution that DC has decided to go with. Sure, Jon has been a part of the DC Universe proper since the 2016 Rebirth light reboot of their continuity, but a large portion of that was as a young adolescent child. Then we had the previous Superman author aged him up nearly half a decade instantaneously—yet botched it. 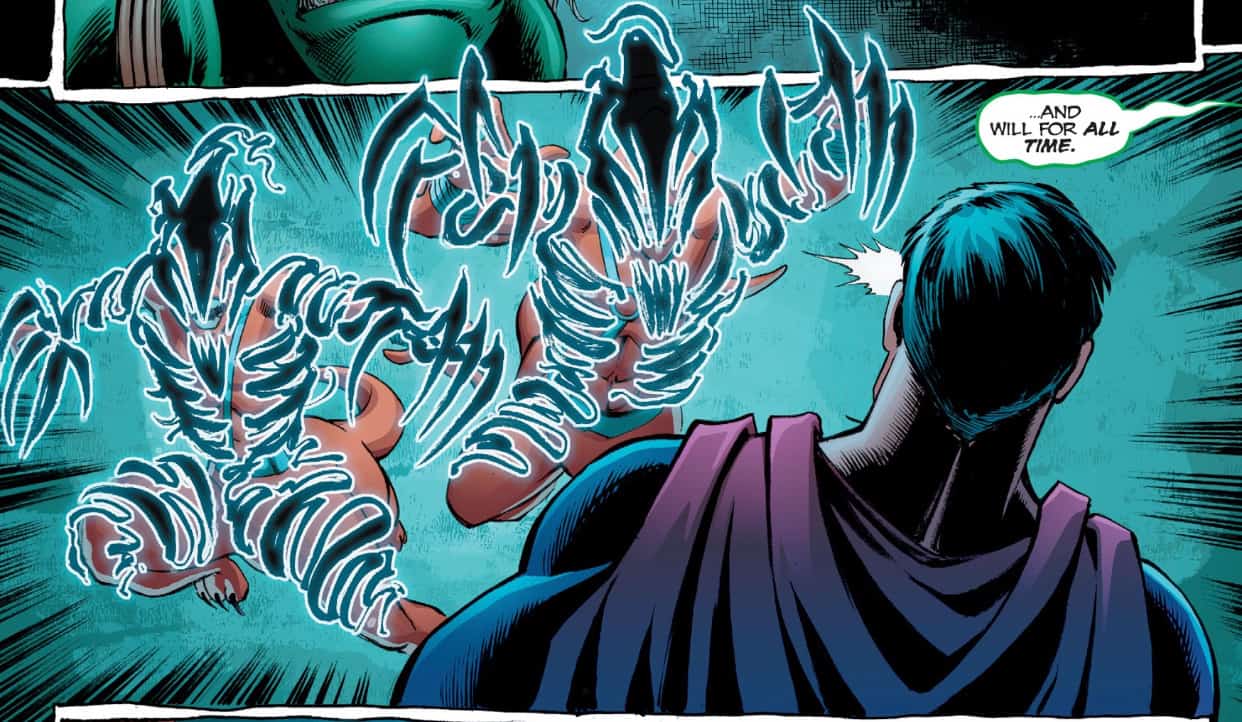 Now I’m not a novice to comics, so I completely understand many characters will always remain in amber, never being allowed to mature and evolve too far from their original status quo, but I’m not advocating that for Jon. I would be more than pleased with Jon eventually replacing Clark, if his evolution would have been handled better. I’m still giving PKJ his shot, and will even see how Tom Taylor and Grant Morrison take on Jon in the upcoming series featuring him, but I’ll remain to be optimistically apprehensive until then.

Finally we have another chapter in the adventures in Metropolis, where Jimmy Olsen and Bibbo have created an organization to safeguard the city during Superman and Jon’s sojourn. Written by Sean Lewis, with art by Sami Basri, is a story featuring the newest Gangbuster, and extra (the appointed vernacular regarding aliens by the team) Loose Cannon, who proves to be…well, a loose cannon. Their Gangbuster is very brutal, and not adverse to using excessive force, where LC proves to be the voice of reason regarding the behavior against the criminals. Something’s going on, as LC loses control. Almost as if there’s someone trying to instigate a hostile environment between the extras and the humans residing in Metropolis. This could be an interesting take on excessive force regarding authority figures, as well as the rise in hostility rising between groups targeting racial minorities in the US, and around the world. This could go either way, just depends on how the team handles it.

Superman and Superman Jr. are racing to save the Thakkramites from the Shadowbreed, but are they too late? Also—Jon learns a new trick with one of his abilities! Pick it up to find out which one!

Superman #31: You Are the Magnet, And I Am the Steel