Superman #8: The Hell Kind of Thing is That to Say to An Eleven-Year-Old?

The return of Jon Kent sparks more questions than answers. His return not only brings a plethora of questions but sensations of loss and grief. Clark and Lois have their son back but have lost so many years. Three weeks have passed for Lois and Clark, but for Jon 6 years have come and gone. He is no longer a pre-adolescent boy; he is a year away from being an adult. Jon tells his parents of the years lost the adventures and trauma that it took to return home to Earth.

Soon after Lois left for Earth, Jon was left with his Grandfather. Jor-El, Jon realized not everything was going to be okay. Jon was asked why he went with his Grandfather. Jon gives short answers before realizing why he really came. Jon is lost at 11; his father is arguably one of the greatest heroes the universe has ever seen. That is a lot to live up too. Jor-el is also questioning his life. 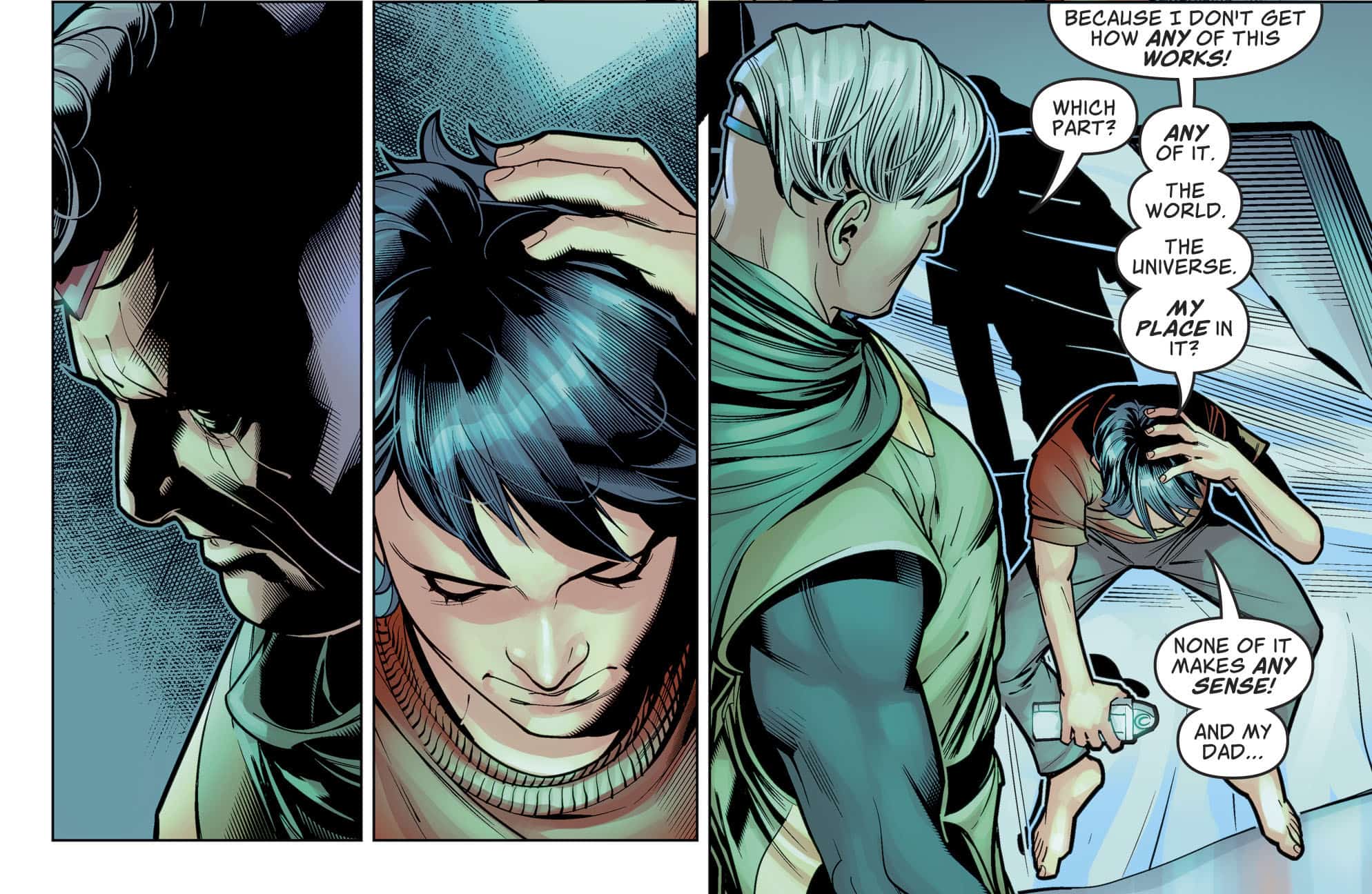 “The Galaxy is so big”, he tells his mother as Kelex examines Jon. Lois begins to freak out, which is understandable. She feels like a horrible mother. Not only has she lost several years with her son but feels guilt for the trauma that Jon has suffered. John reassures his mother that she did fine– she raised him to take care of himself. He is proud of himself, as she should be too. 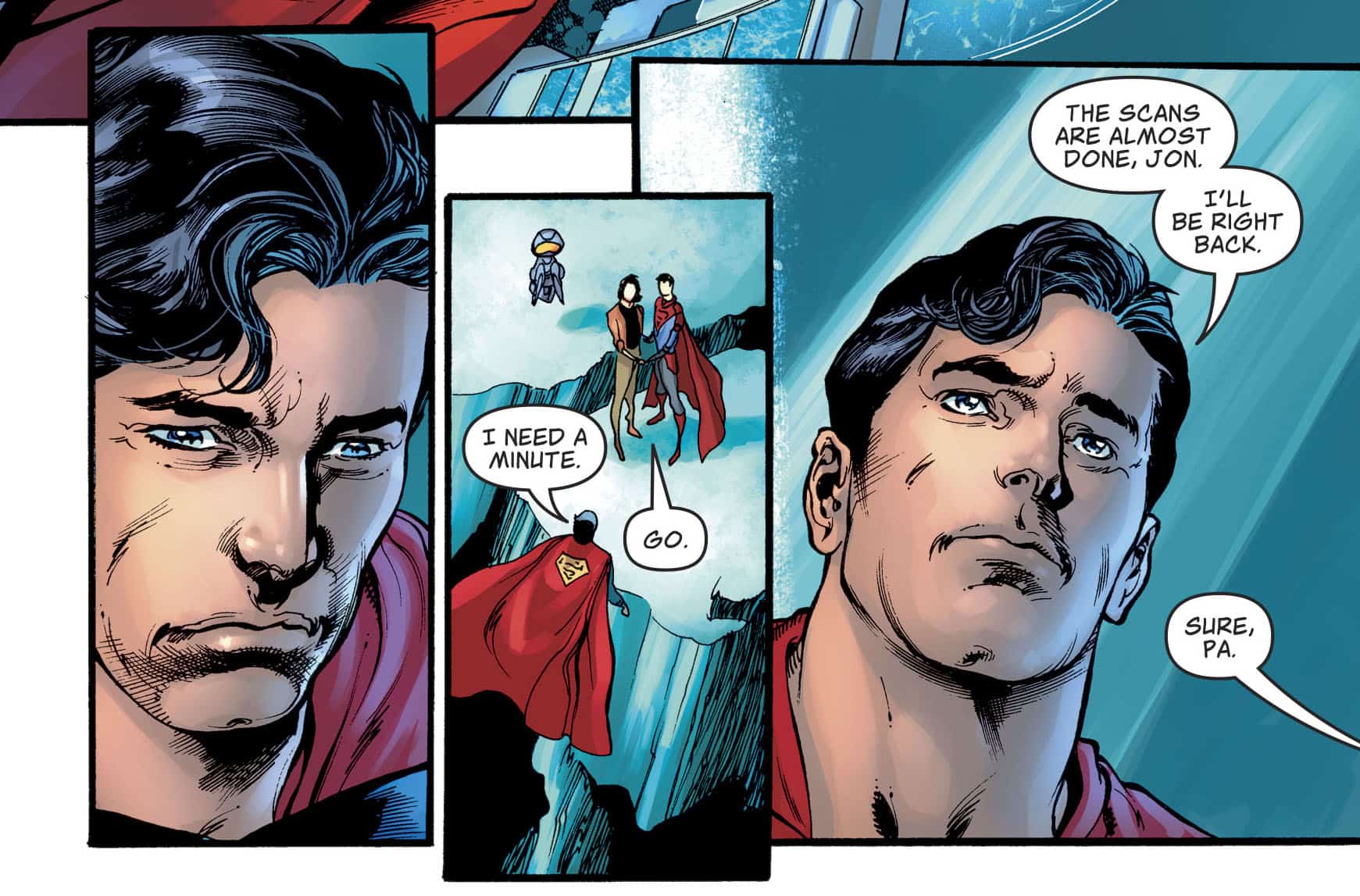 Clark remains mostly quiet during the conversation until tears begin to fill his blue eyes. He steps away (flies off) to think and also find something to hit. Not Brainiac, Not Zaar, not Luthor, but his own Father took what no one else could. Was not long before Clark finds something to hit; Mongul, The Planet Destroyer. Mongul doesn’t stand a chance as Clark rages on. 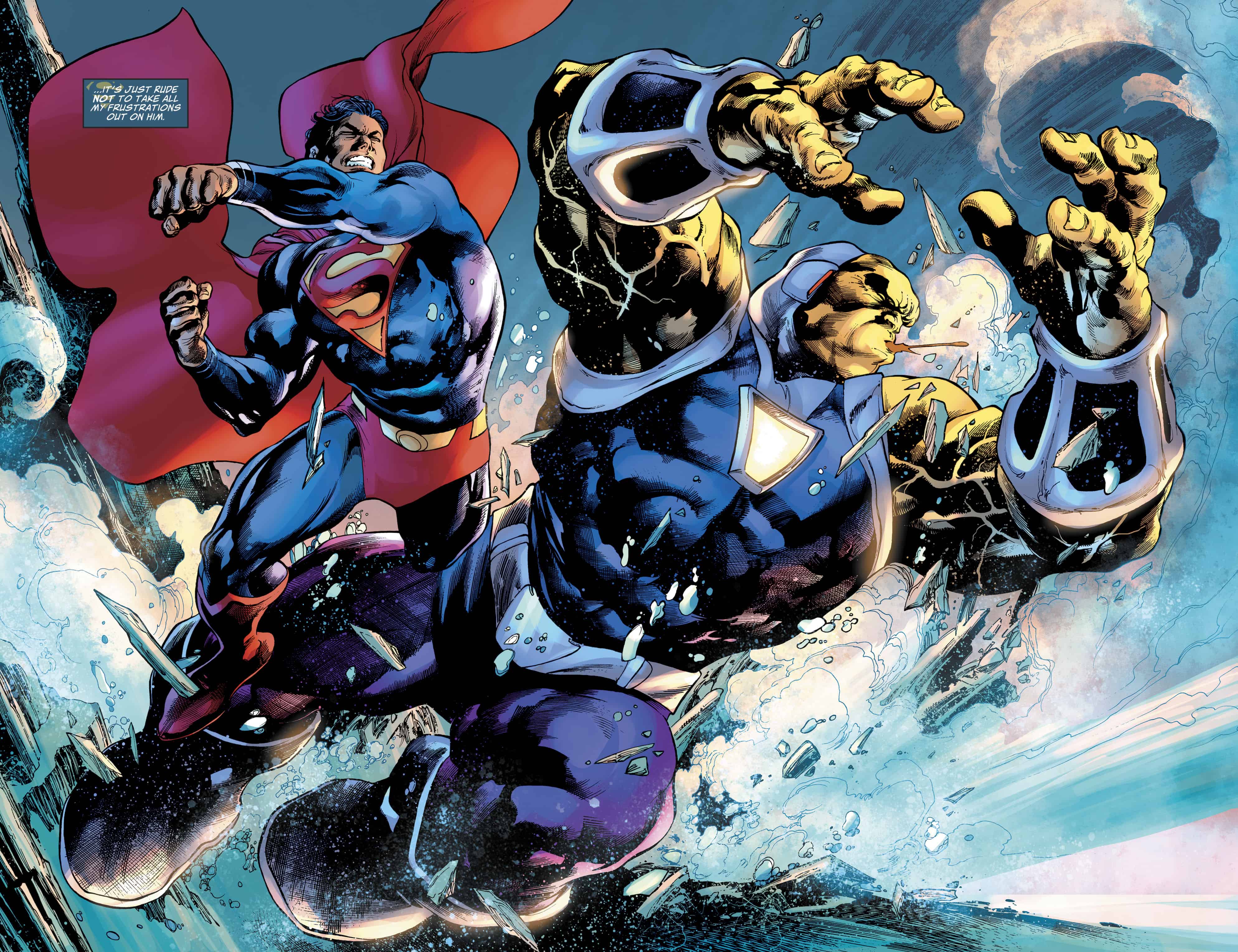 Upon Clark’s return, Kelex has completed scanning Jon. There is no doubt that it is Jon, No Space Cancer. Even with evidence, they are sending it to the Justice League to get a second opinion. Jon continues to talk about different adventures. He got to meet Green Lanterns; Jon had asked if they would take him back. Arisia and Kilowog agreed, but Jor-El showed up and they were unable to finish the conversation. Jor-El offered to take him home, but Jon declined. Jor-el was upset and didn’t talk to Jon the rest of the summer. The moment Jor-El spoke the words I am sorry, they were sucked into a black hole. 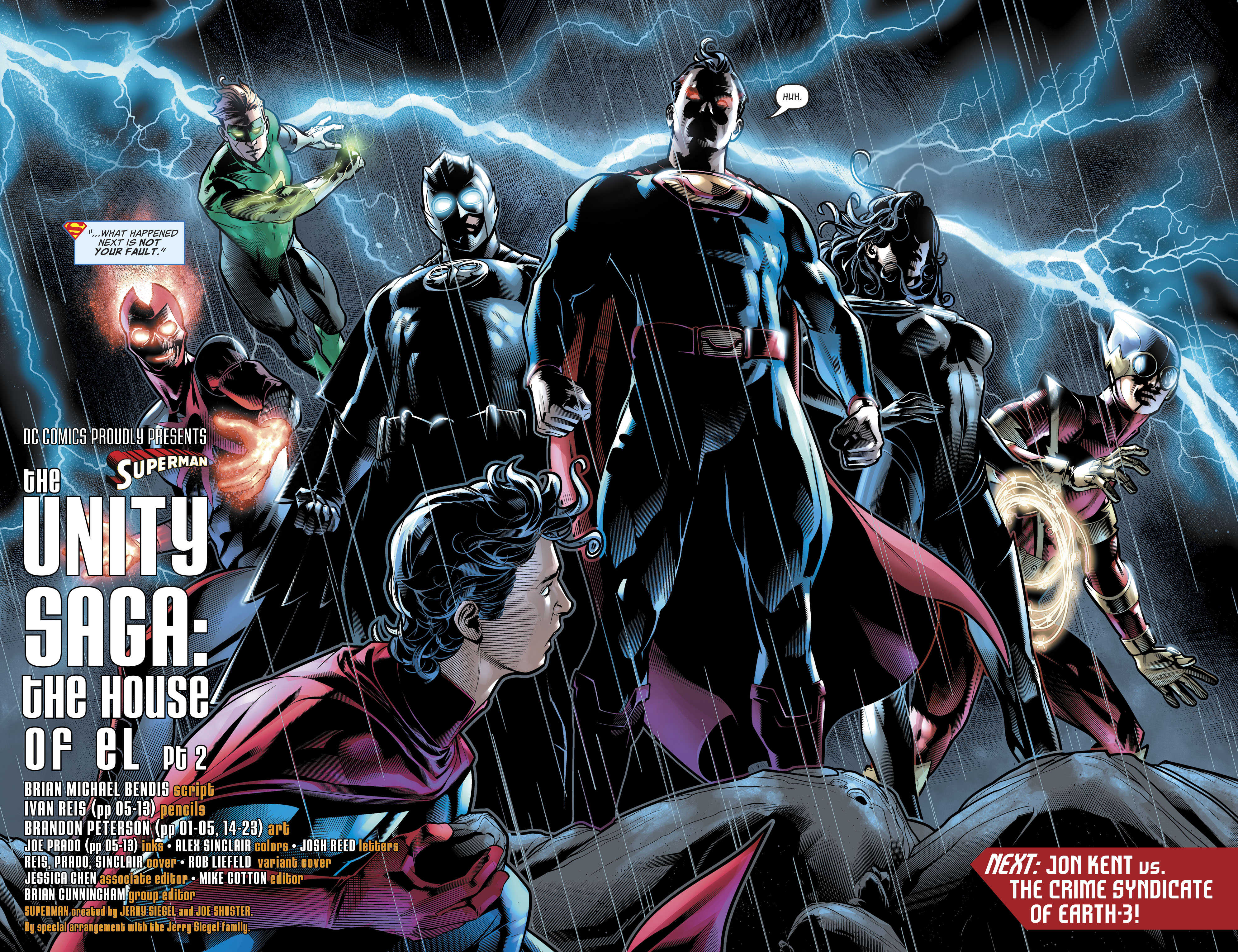 This issue once again had several different artists at play, however, this book blended a lot better, I didn't notice until I saw the credits, or until I went back to select pictures that a few things differ here and there. The artwork overall is stunning from the small panels to splash pages. The black hole page is simply stunning. 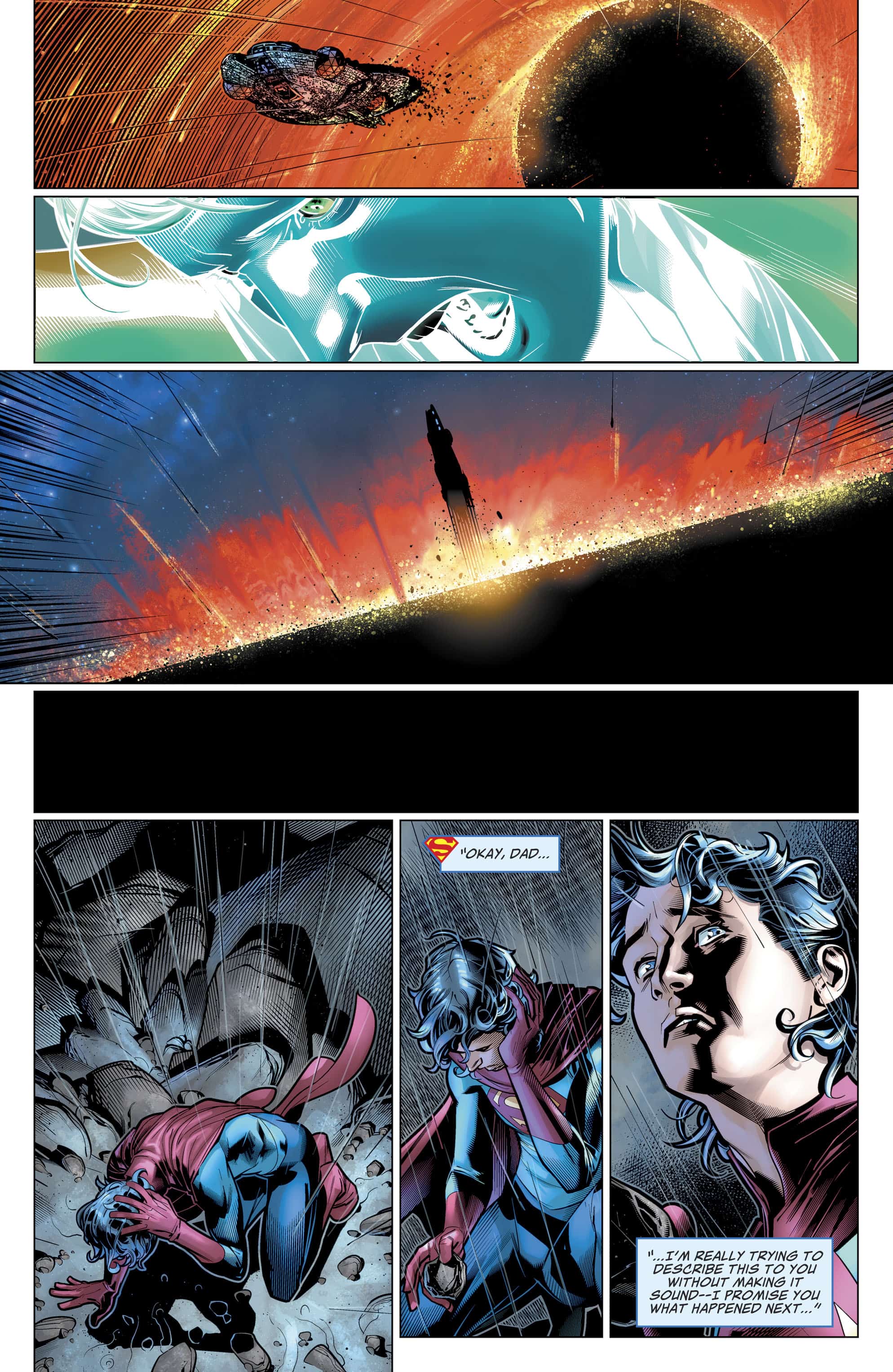 Bendis is doing a stellar job at storytelling on this arc. I personally felt Clark's pain, you can tell Jon is happy to be home, Lois you can feel for her as a mother. I cannot wait for the next issue. This issue is a solid 10. This story proves that superheroes don't have to punch its way through an issue but shows every book can have a heart.

Superman #8: The Hell Kind of Thing is That to Say to An Eleven-Year-Old?