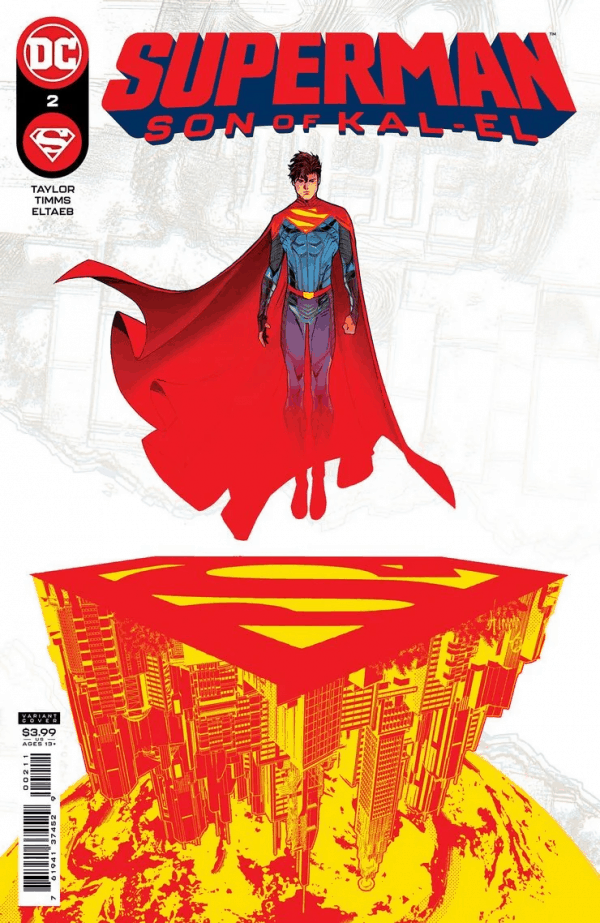 Jon dons a secret identity and enrolls in university. Can he keep his secrets to himself?

I’ve been trying to review this for the better part of a week, but something was constantly stopping me, and for once I’m not talking about my teething toddler. Something about this issue really didn’t sit right with me and it was important to me to get a handle on what that ‘something” was before I tried to write about it.

I’ll get to it in a minute. First I’m going to focus on what this issue did remarkably well.

This issue balanced the aspects of Jon Kent incredibly well. We see him on his first day of university, we witness a poignant heart-to-heart with his father, and we get to watch him being Superman and saving some desperate, oceanbound refugees.

The brief lead up to the university sign-in day was a treat. I love Jon’s cheerful optimism. He’s got one of the most recognizable faces on his planet and he thought that a bad wig would disguise him. I guess he got more from his father than insane strength.

Of course Jon has trouble at University. The fact that he’s attending school in America probably doesn’t help. The school shooting scene was done incredibly well. I feel like it’s important to put down on paper the fact that, as of July 31, there have been 411 mass shootings in America. The American government is doing less than nothing about this. America could really use a Superman, right about now. He’d be a lot better at protecting children than bulletproof backpacks and endless active shooter drilling. The ‘thoughts and prayers’ bullets were horrifyingly apt.

When Jon rescued the refugees from the ocean, I got goosebumps. Part of it was the hopefulness of the image: Superman, raising an overfull tanker above the waves and flying the refugees to safety. Part of it was the incredibly realistic reaction of the American soldiers. Of course they would point guns at children and handcuff sick, terrified people. There are currently 14,400 children, who crossed the US border as refugees, in American DHHS custody. That means that they have passed through the overcrowded plastic and barbed wire prisons (where they were crammed together for months under Trump and Biden) and are awaiting placement with sponsors.

Who knows how long they’ll wait.

We could really use a Superman.

The conversation between Clark and Jon, the moon-based meeting between the men of steel, was beautifully done. I’m an immigrant to the UK. I know what it’s like to care about a country, to love it (and its people) as though it were your own because it is your own. And I know how hard it is (how ungrateful you feel) to offer constructive criticism of the place that took you in. Taylor captured that perspective perfectly with Superman. When Clark admitted to harboring that vulnerability I felt a twang of recognition. Jon Kent is a citizen, both of America and of Earth, in a way that his father can never be, love it though he might. That’s a hard thing to say, and it might not be true, but it’s something that this immigrant feels. It struck me to my guts.

Now. Onto the bad.

It’s tempting, within the sci-fi/fantasy context of this medium, to rely on old tropes. The idea that the state controls the media in such a way that the ‘only’ way to get the truth is via the auspices of subversive journalism is inappropriate given the existence of QAnon and Fox news. A large part of their murderous appeal blossoms (like sick roses, eaten by invisible worms) from the insistence that everyone else is lying, that only they dare to blat their rageful ‘truth’. And they convert people to their side exactly the way that Damien introduces Jon to The Truth. We are living in a pandemic where most news sites have been listening to the research, advocating vaccination, saving lives, and unaccredited online talking heads are spreading deadly misinformation in the same manner as The Truth.

Tom Taylor is an excellent writer. If I see his name on a book, I’m buying it less than five seconds later. He’s in my top three list of writers who are operating in comics right now, and he rarely missteps. But this was close. What usually tends to happen is that important news stories about refugees, or indeed anything that happens anywhere that isn’t America, are underreported and people miss the problems because they are more interested in local (as in their country’s) politics or else in whatever their favorite celebrity is doing. I’m concerned that people who have been blinded by QAnon will take this story as confirmation.

This was the only rough patch I felt in the story. John Timms’ art (augmented by Gabe Eltaeb’s colors) was clear as a dream. There were more than a few stand-out pages in this book, and some images that I can’t help but revisit. It’s beautiful, generous work.

Beautiful, generous art and a timely, important story combine to form a book that you all really should be reading.