Superman Son of Kal-El #8: Steve Jobs But, Like, Psychotic 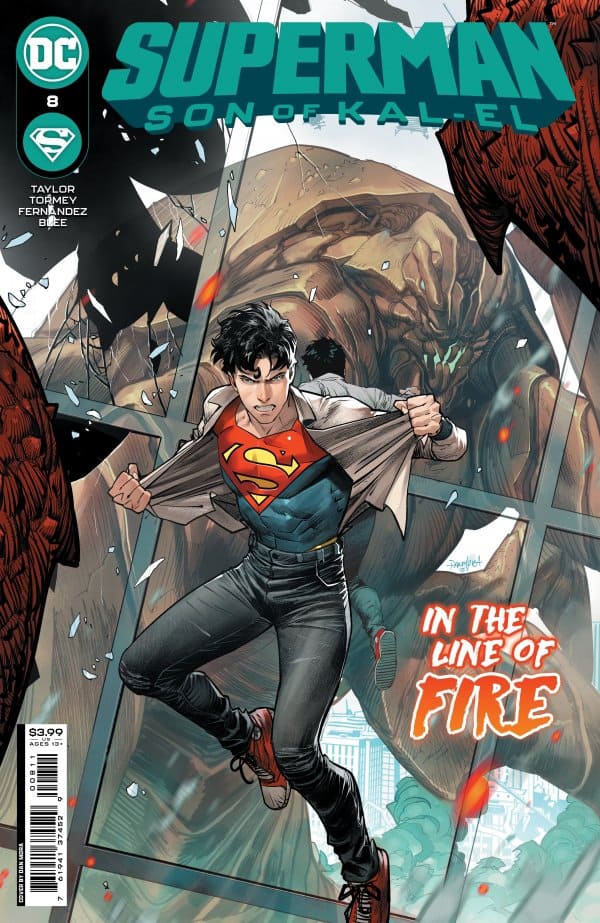 After provoking a giant crab monster into a rampage, the man controlling the Gamorra Corps shows us his cards. Mind controlled meta-humans abound. The Rising has begun.

Let me start by saying that I love the presentation of this villain. Framing Bendix as a (slightly more) malignant Steve Jobs with the black bodysuit and his faux-simplistic presentation style fits beautifully with the themes of this book. When you give businessmen too much power, this is what they do. They wreck the environment, usurp people’s bodies (especially the bodies belonging to women and people of color) and ultimately they insinuate themselves, Facebook (sorry, Meta) style, into every aspect of people’s lives. The script, given life and substance by the art, did so much with nothing more than the image of a black-clad man, standing on a stage in a packed auditorium. Semiotically, this was a brilliant and effective bit of staging.

Tom Taylor was born to write characters who are both Good and interesting. ‘Good’ is different from ‘nice’ (nice originally meant stupid. It emerges from the latin nescius, meaning ‘ignorant’) and his characters are Good in with the rare sort of full-bodied, complexity which enables them to maintain a sense of identity, a feeling of reality, that’s rare in any form of fiction. Jay is ethical and cuttingly sarcastic. Jon is brilliant. Lois will do Whatever It Takes, but only if it’s right. People, in this world as in ours, are sometimes evil. Occasionally their evil actions spring from trauma, like it does in the members of the Gamorra Corps. Other times it comes from insecurity, in people like Lex Luthor. People want and abuse power due to many different reasons and Taylor not only understands that, he makes certain that we, as readers, do as well.

I’ve mentioned the effectiveness of the art before, but Cian Tormey and Raül Fernandez manage something very special, here. I won’t spoil anything, but keep a careful eye on that major fight scene. The emotions generated there are absolutely perfect.

Taylor and Tormey have created something very special. This is an important book. You all should be reading it.

Taylor and Tormey have created something very special. This is an important book. You all should be reading it.

Superman Son of Kal-El #8: Steve Jobs But, Like, Psychotic