Superman: Space Age #1: Is There Purpose? 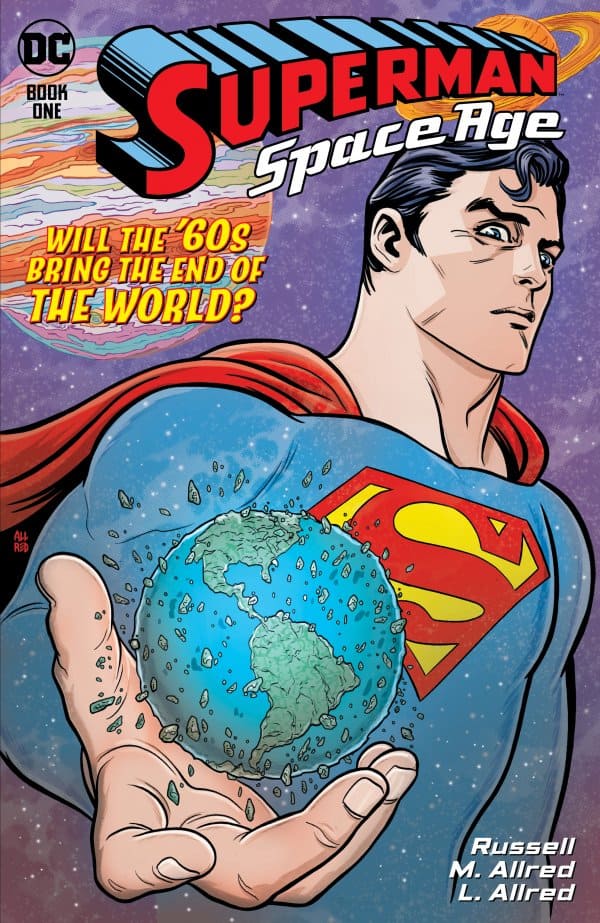 Meet Clark Kent, a young reporter who just learned that the world will soon come to an end (Crisis on Infinite Earths) and there is nothing he can do to save it. Sounds like a job for his alter ego…Superman! After years of standing idle, the young man from Krypton defies the wishes of his fathers to come out to the world as the first superhero of the Space Age. As each decade passes and each new danger emerges, he wonders if this is the one that will kill him and everyone he loves. Superman realizes that even good intentions are not without their backlash as the world around him transforms into a place as determined to destroy itself as he is to save it. Uniting the critically acclaimed writer Mark Russell (One-Star Squadron and The Flintstones) and Eisner-winner Mike Allred (Silver Surfer and Bowie: Stardust, Rayguns & Moonage Daydreams) for the first time, this series promises fans an unforgettable journey through U.S. history and culture starring our beloved characters.

Life is a constant struggle against the ever forward-creeping shadows of the dark. An attempt to fan the flames to keep the eternal night at bay. It’s messy and it’s hard and it’s never easy.

But it’s the strength we get from those around us that helps us to push forward and do what’s right and continue on living. That’s just one of the many lessons Superman: Space Age #1 tries to instill in its readers.

I’ll admit that I struggled with my feelings on this first issue. I’m still not totally sure whether I enjoy it or not. But I think it has merit in some of its lessons. While it mischaracterizes quintessential Superman characters like Pa Kent. There’s this back and forth, for me at least, where I enjoy one moment but then don’t fully love the next.

I think Mark Russell will give us a compelling story of a hero struggling to keep a world from eating itself alive. I just don’t think I will find myself fully immersed due to personal qualms towards the book.

The book itself really tries to discuss what makes a hero. What makes one simple life, inconsequential in the grand scheme of things, so important to those around them. Framing this initial issue around the assassination of JFK was a smart way to set up a discussion for that idea. That those who are seen as heroes aren’t always the most perfect people or the most prepared. But sometimes it is simply those who show up. Especially in moments of turmoil like being on the verge of nuclear war after the death of a leader.

Space Age #1 is filled with these ideas about life and its meaning. About the little pleasures that give us strength to continue. Or finding purpose in the meaningless concoction of the universe.

All these lessons are given life by the stand out art of Michael Allred (artist) and Laura Allred (colorist). It’s an unusual style that lends itself well to this unusual Superman story. The facial expressions are what stick out in my mind personally.

My biggest issue with the book is arguably the inclusion of Crisis on Infinite Earths. It’s a story I love, but am convinced DC as a company has shackled itself to the corpse of and is dragging around— hoping it dances once again.

I think this story will only be as good as its ending, as that is what so much of the discussions and moments seem to be leading to. Will there be purpose in this story’s existence? Is it simply enough to say that the story itself was made? We’ll find out in time.

Superman: Space Age is a book that's quality will be determined by its ending, that comes into this world with a very interesting start. I am intrigued to see where it goes with issue two.

Superman: Space Age #1: Is There Purpose?