Superman & The Authority #4: Under Finer Management 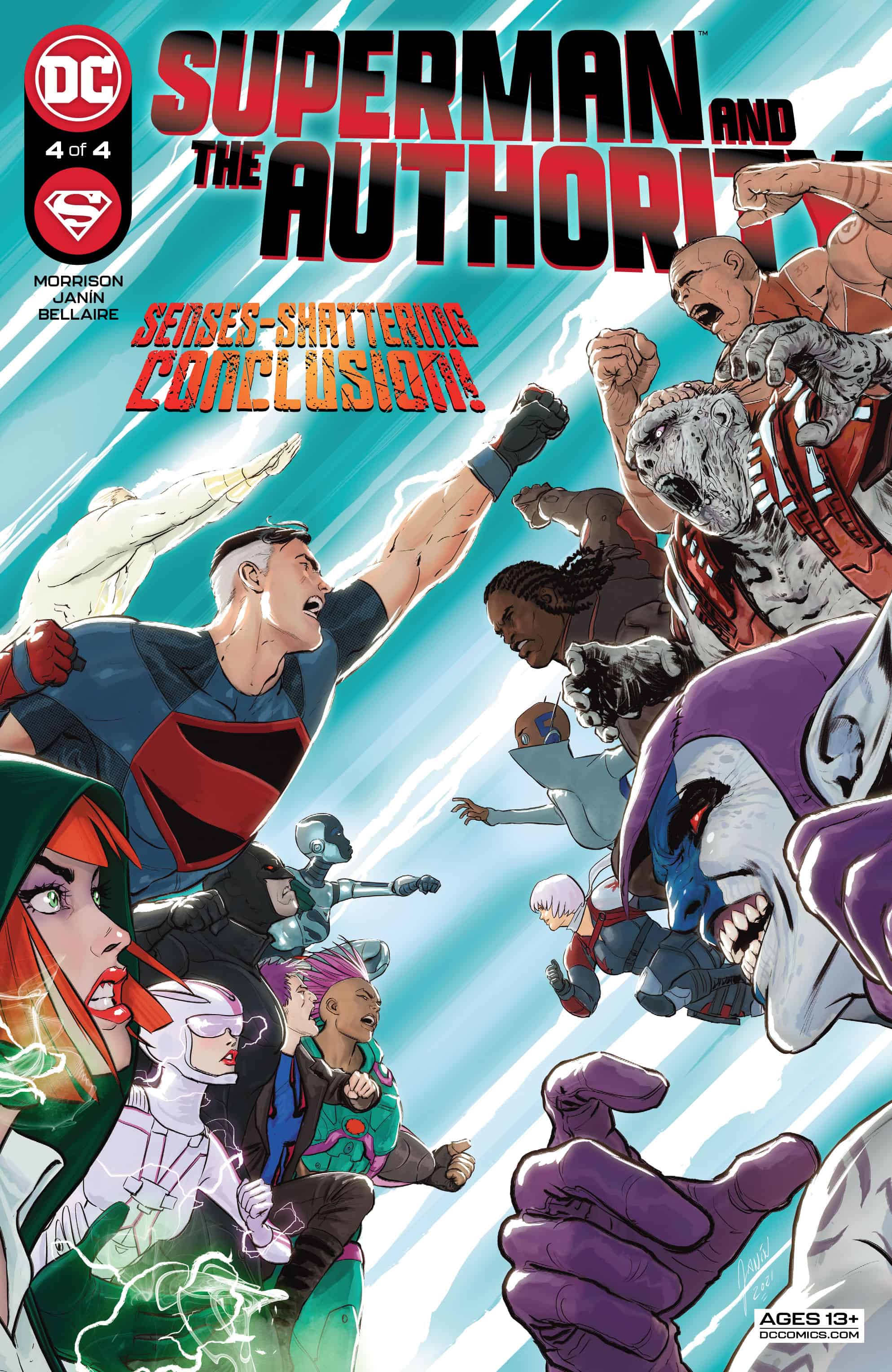 Is the team ready for what’s next? Will the Man of Steel’s new super-group fall apart before they even begin? The Ultra-Humanite has put together his own team of rogues designed to match the Authority fist for fist. This series comes to an explosive conclusion that will threaten to split the Man of Steel in half!

Let’s talk about Warren Ellis and Bryan Hitch’s The Authority. Specifically, the first collection, Relentless.
Most specifically, Grant Morrison’s introduction: “The Authority is the first great superhero team book of the 21st century. Next to it, everything else seems pale and stale and repetitive. Be honest.” The Authority was at its most potent when it would muster all of its pre-9/11 bluster, knock down buildings and assume things would be fine afterwards, because that’s how superhero stories work. The world could explode, because there would be a world to save afterwards, and you didn’t have to be too attached to it, because caring about things seemed a little passé, right?
It feels more and more like Morrison doesn’t want their superheroes like that anymore. They want heroes who care, who scrap not because they just like the thrill of the fight, but because they have something to prove—to themselves, to their teammates, to the world. Wanton destruction for its own sake doesn’t cut it now, all that does is leave pointless devastation in its wake.
The entire concluding issue of the miniseries, appropriately titled “Widescreen”, is fighting. Brainiac is revealed to be the villain behind the plot, dispatching a team of opposing heroes to stop Superman’s plan, playing one step ahead of Supes as he struggles to get his bearings in the fight. He’s on the ropes! How will he get of of this?
Easy: by being one step ahead of the opposition. Morrison’s Superman is old, yes, and he is weaker, but he’s still Superman. He’s smart, he’s resourceful, and he trusts those around him. And he’s not the powerhouse he is without them, either.
The issue itself plays out somewhat predictably. Most team members are forced to face a mirror image of themselves, and that image is defeated because Superman handpicked them to be on his team, because he has faith in their ability. That, and the fact that all of the “evil” counterparts were brought onboard by deception or outright scamming (Midnighter’s opponent was given a fortune in NFT’s lol).
This is not the Authority of 1999, content to flit around gorgeously rendered backdrops dealing wanton destruction. The issue is focused on the details of individual confrontations, without the useless detail of a massive invading force filling up space in the background. Every bit of massive, city-clearing destruction is stopped, pulling the borders of the widescreen action tighter and tighter, closer to the old-fashioned hero-on-villain fighting comics excel at. Superman at the helm of such a team means that things are run a little cleaner, a little less destructively. The first step in creating a finer world means making sure there’s something to build on.
As the issue ends, the first cliffhanger shows that the world they’re improving isn’t Earth. It’s Warworld. The Authority isn’t protecting Earth, they’re taking the fight to someone who could use a bruising.
The second, more distressing, epilogue, ends on two things: Black’s remark that you “miss a lot when you only look for the good in people,” and the portion of the Source Wall incessantly tracing “LIGHTRAY IS”.
Both of these feel significant. Superman is dressed in his classic costume, yellow fill-in and cape and all. Superman knows the kind of man Kennedy was, but he made the promise anyways. Black himself was someone who didn’t deserve the benefit of the doubt, but Superman, the paragon of hope and goodness, extended it anyways. Superman is someone who will do his best to see the good in everyone, and Morrison writes him as someone who will try his damndest to get them to see it, too.
Later in their intro, Morrison writes, “The Authority dares to imagine a world beyond the postmodern ironic hopelessness of endless recycled TV quotes and retro-nostalgic feedback.” That meant something then, and it means something now. Ellis’ Authority was built on swaggering, sneering, and using a detached affect as a weapon as powerful as Apollo and Midnighter. We were here to see the heroes, that’s what we should care about. The little people should be so lucky.
Morrison’s Authority is a team built on trust, on hope. They want us to care, they want us to strive to see the good in things. Superman won the day because he believed in his team, and he believed in his mission. Over four issues, Morrison put together a team every bit as vicious as Ellis’, but it’s not mean. It’s focused on making the world better, not just preserving what’s there. It’s taking responsibility for mistakes and maybe showing that things can be done differently.
A finer world doesn’t happen without finer people.

Superman and the Authority #4 wraps up the miniseries with a kinder, more hopeful, but no less vicious team ready to take on the biggest threats.

Superman & The Authority #4: Under Finer Management