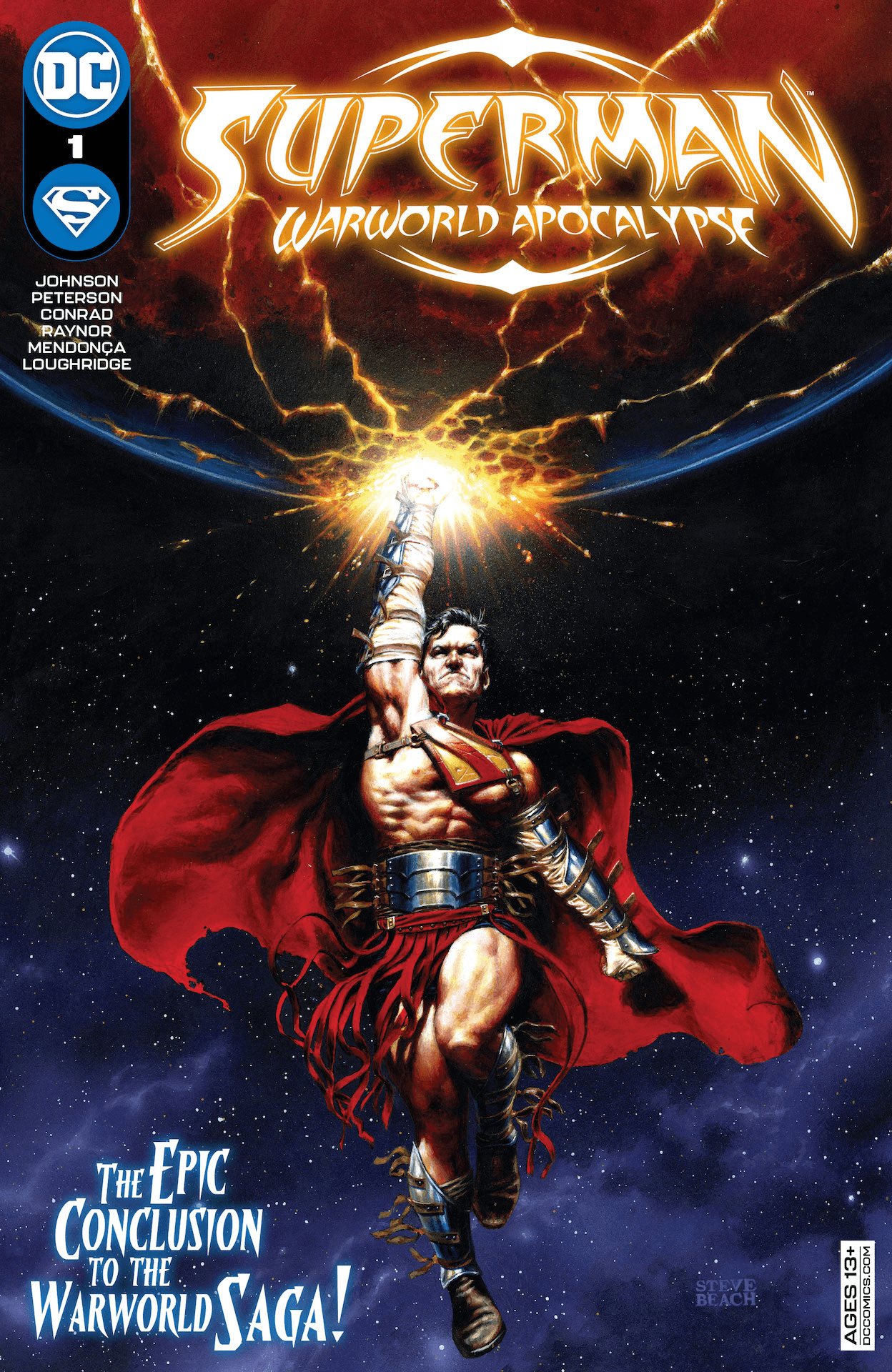 Still stinging from recent unexpected betrayals, Superman confronts Mongul and Kryl-Ux. Faced with an ultimatum and with two innocent children’s necks on the line, it’s up to him to carve a path forward to win the battle without sacrificing lives. Meanwhile, the Authority confronts their captured and reprogrammed comrades in this, the grand finale of the Warworld Epic.

The first time we the readers became aware of the Warworld Saga was way back during the Future State event. There, Superman was believed dead, having disappeared from Earth for a decade. At the same time, Midnighter struggled with a time loop that would ultimately lead to the Future State version of him landing in the main timeline for hijinks and drama.

Future State was about a year and a half ago, so this has been a long time coming. Now here we are, at the culmination of the Warworld Saga… and the question is… can everything be brought together into a satisfying conclusion after all this build-up?

Spoiler, the answer is yes with one caveat.

Let’s get that one point out of the way. The backup story that has been running in Action Comics, A World Without Clark Kent, does not receive a follow-up or resolution here. That doesn’t bother me inherently – I assume it’s because the story will be followed up after Clark returns to Earth – but it was slightly confusing given that the last issue specifically said its story would continue in this special.

Other than that, though? We have an epic conclusion to an epic saga.

When last we dropped in, Superman had returned from retrieving the Fire of Olgrun only to find himself face to face with Mongul and his supposed ally Kryl-Ux… and their hostages, the Phaelosian children Otho and Osul. Meanwhile, the majority of Superman’s allies, The Authority, prepared to face off with their missing (and in some cases brainwashed) members, OMAC, Apollo, and the Superhero Formerly Known As Lightray. Finally, Natasha Irons, Orphan, and the blacksmith Leonath set off to reach the red sun generating star forge that keeps Warworld together and install the genesis reactor Natasha, John Henry Irons, and Leonath had conceived off via an interplanetary Zoom call.

We pick up where we left off, with Midnighter leading a force of revolutionaries against Mongul’s forces… which unfortunately have their missing members as their vanguard. That being the case, the first order of business is to try and wrest them away from Mongul.

This may be fairly straightforward for Mack; he is still in control of himself and thus it’s a question of trying to change his mind. That’s the simple one. Lightray and Apollo, however, are much more complicated. Apollo is being controlled by Mongul’s follower, Teacher, via neural implants that are nigh impossible to remove due to his impenetrable skin. He is also exceptionally difficult to manage without Superman there. Yet, even Apollo’s situation may be simple to rectify compared to that of the composite being created when Mongul slew the undead witch Mother and used her to raise Lia Nelson from the dead.

Many of these issues can be better managed if Natasha, Leonath, and Orphan can complete their mission by installing the Genesis Reactor. Back in Action Comics #1045, Natasha and John Henry Irons were able to create this generator with help from Leonath. The hope was to create a way to save both Warworld and the Phaelosian Thao-La by utilizing the powerful Genesis energy found in the Genesis Fragment as well as parts of Warworld. This would restore Superman’s waning powers as well as empower the Phaelosian slaves and turn the tide of battle. However, this is challenging for them as it is extremely dangerous to get too close. So, how will they manage to do it?

Last and decidedly not least we have Superman, currently embroiled in a conflict with both Mongul and the treacherous Kryl-Ux with the children Osul and Otho on the line. The ultimatum: turn over the Fire of Olgrun to Mongul or watch the children die. Under normal circumstances, this choice might be simpler, but with Superman’s powers at a low ebb, it’s unlikely that he has the speed to get the children to safety before Mongul can strike them down. Unfortunately for Mongul, he makes a choice that proves motivational for Superman… but does he have the strength to take on Warworld’s master now?

The branches of story interconnect and interact, affecting one another as our heroes test their mettle in this battle against seemingly impossible odds. The Genesis Reactor mission in particular is a potential game-changer, not just in this battle but in days to come as well.

Speaking of game-changers…. why did Kryl-Ux assist Mongul to begin with? The answer may itself prove consequential going forward.

For the moment, though, don’t expect either side to emerge wholly unscathed as allies and enemies alike find disaster and triumph within this long-building war. One of the losses in particular made me wish I had tissues on hand.

The artwork on this run has been solid all around and this issue is no exception. That said, I mentioned in my review last week that the artist turnover has been a bit strange and, well, this issue has five artists. To their credit the styles do mesh very well for the most part – I wasn’t going from page to page feeling like I’d been thrown into another artistic universe, but it is worth noting.

That said, there are so many great visual moments that I can’t be but so bothered. The entire sequence with Natasha and Orphan as they face off with Teacher is effective, emphasizing Orphan’s creepiness and overwhelming strength. Superman’s final confrontation with Mongul crackles, and the chaos and tumult of the war contrasts beautifully with the quiet moments of the aftermatch… and a stunning final page that will make your heart swell.

It can be challenging to pull together the threads of a longer plot – particularly in serialized mediums. There’s always the danger that things will be forgotten or dropped, or that editorial changes will reroute things into completely new directions that may or may not follow from what came before. But that’s not the case here. Superman: Warworld Apocalypse does not tie everything up neatly with a bow, but that’s not a criticism. It fully resolves the primary conflict, fulfilling its narrative promise, while leaving open – or opening – new story threads that will no doubt ripple outward for some time to come.

A truly satisfying conclusion to one of the best Superman arcs in recent memory... made all the more intriguing for the roads that it opens going forward as for the roads closed by the last page. Superman: Warworld Apocalypse has me anticipating future developments and wondering what is in store for these characters, and what could become of Warworld from this point on.