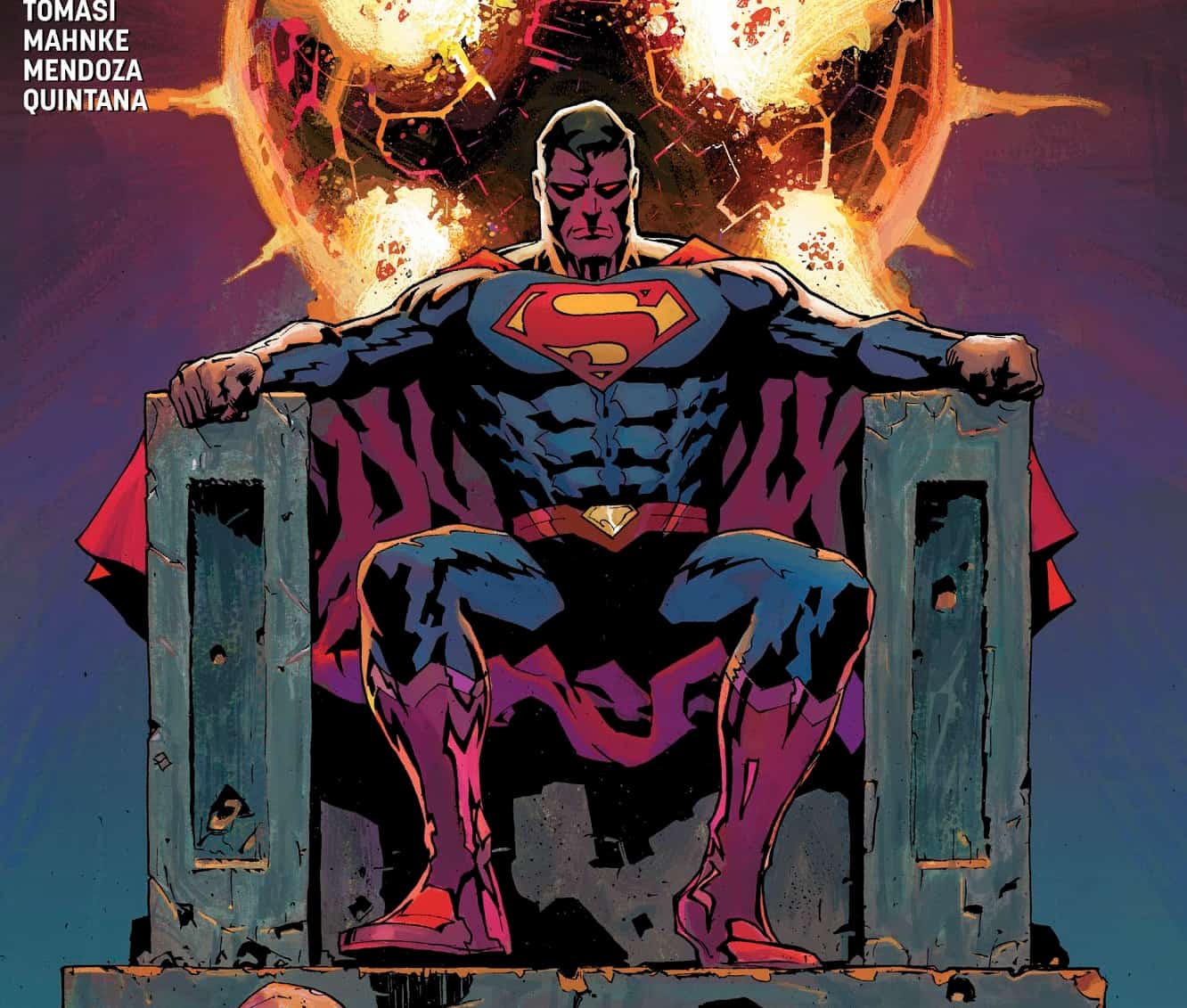 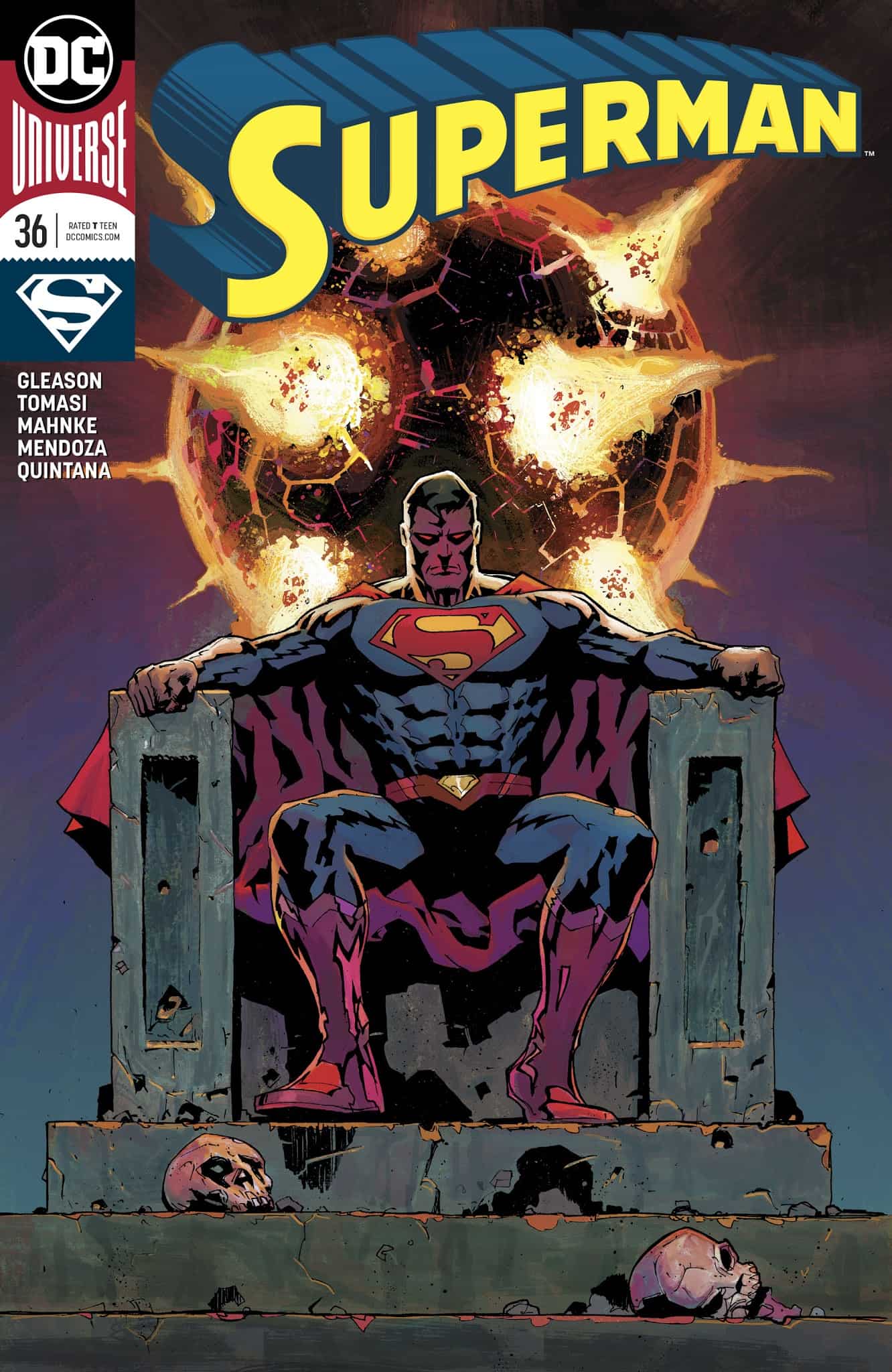 “Imperius Lex” finale! It’s all-out war on Apokolips! And the denizens of that world are determined to get Superman to claim Darkseid’s throne…and make Luthor pay for betraying them once and for all!

Kalibak has knocked out Lex Luthor and snuffed out the Fire Pits of Apokolips causing a worldwide blackout.  And he’s not about to accept Luthor or Superman taking Darkseid’s throne.  Just as he attacks Superman and Granny Goodness and her army (with new recruit Lois Lane), the Hunger Dogs show up…with their new leader: Superboy.

Ardora and Prophet of Apokolips discuss in voiceover the blackout and ongoing civil war over Darkseid’s throne as Superman, Lois and Superboy and the Hunger Dogs are caught up in Kalibak’s assault on Granny Goodness and the Female Furies.  Prophet fears the situation is hopeless, but Ardora says it’s not too late.  Maybe they can prove to Superman they truly have good will.

As Kalibak and Granny battle, a parademon attacks an unconscious Lex.  Superboy puts the Hunger Dogs around Lex, but Kalibak steps in and knocks them out of the way. Then he throws Lex into the empty Fire Pit which is millions of miles’ deep. That’s when Ardora, Prophet and their army arrive to throw a cable off of their hovercraft catching Luthor before he falls while firing a laser blasting Kalibak underground.  They then proceed to arrest everyone except for Luthor, Lois, Superboy, and Superman.

Superman orders them not to kill anyone: “Mercy is for those who are in need of it.”  Ardora and Prophet explain to him that mercy is an unknown concept to their people.  He asks what will happen to them now… 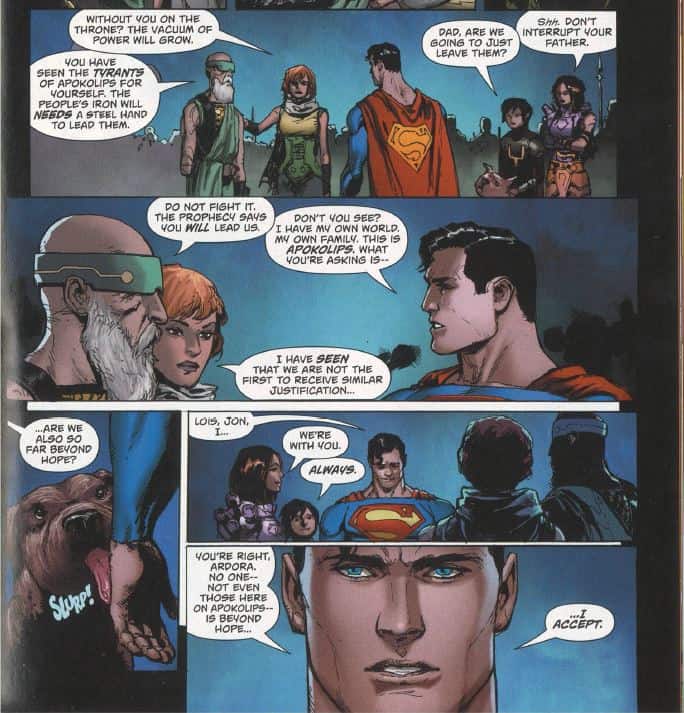 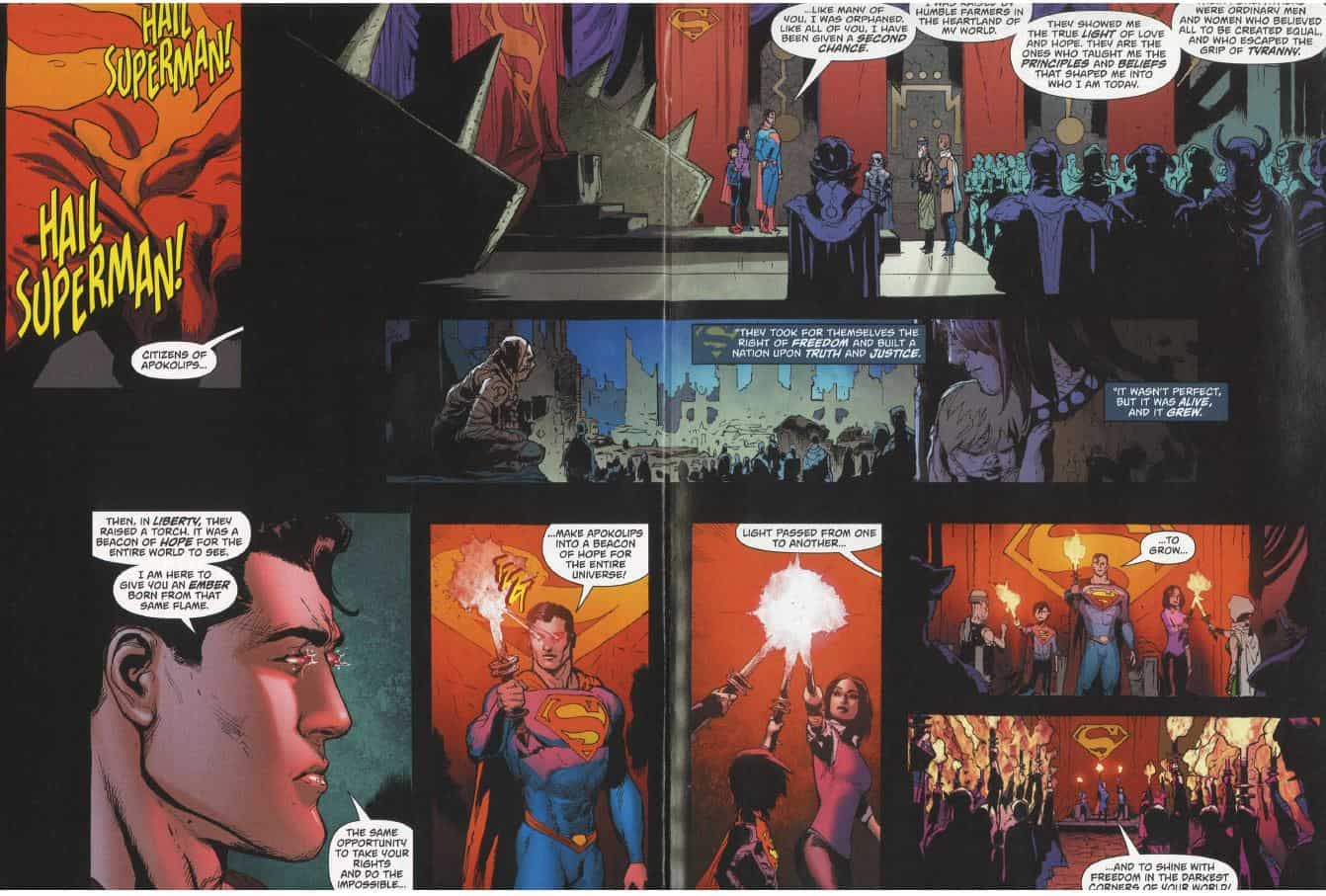 Superman tasks Ardora with calling together the governors of the regions and that they find a way to “govern each other according to the people’s needs.”  She agrees and says they’ll do their best. They then wheel in a stasis chamber with Luthor locked inside and also give Superman a Boom Cube to teleport back to Earth.  The cube will also allow them to call him whenever they need his assistance; Superman assures them he will always answer their call.  As they use the cube to return to Earth, Prophet tells Ardora he sees as much chance for hope, peace, and order on Apokolips as we have on Earth.

Luthor wakes up in his office and orders his secretary to reschedule his meetings.  He’s enjoying the sunrise on his balcony when Superman flies in front of him. Superman explains everything is fine on Apokolips when Lex cuts him off.  He chastises Superman for being there to help the Justice League or save a cat from a tree, but when he needs help he leaves him marooned on another planet. Lex says he’s bled for Metropolis and the Superman shield, but all he gets in return is suspicion, disrespect and no mercy and no trust.  Superman replies that he’s a hypocrite who can’t be trusted and that his actions on Apokolips prove that.

Luthor says, “So be it” and rips the Superman shield off of his armor.  Superman flies off and Luthor stands there with an evil grin.

That was not the ending we seemed to be headed to when this arc started.

Ultimately, this arc sets up many dangling subplots for future exploration without tying much up.  The cover leads you to believe Superman has gone evil and taken over Darkseid’s throne which does not happen.  Instead, Superman promises to be there for the people of Apokolips when they need him while he stays on Earth…which is the exact same situation Luthor had.

Why would the people of Apokolips be any happier with that than they were with Luthor? It makes no sense.  Yes, Superman gave a rousing speech about democracy, truth, and justice for all.  But this is Apokolips.  Anyone who’s been reading DC Comics in the past 4 decades knows all too well that the homeworld of Darkseid is not going to have their own Arab Spring with massive outbreaks of democracy.  And it’s probably going to end the same way for Apokolips as it did for the Middle East.

As is obvious from DC’s upcoming solicitations, Luthor is going back to being a villain.  It’s apparent now that this is the primary purpose of this arc.  The trouble is, getting to that big moment wasn’t a big moment at all.  It takes 6-word balloons in 4 1/2 panels for Luthor to complain about how Superman doesn’t’ trust him, remove the “S” shield and do no more than give a sinister grin on the last page.

That’s it. That’s the whole scene.  For the past year and a half, Lex Luthor has fought to be Superman’s ally and risked his life to be a hero to Metropolis.  But as soon as Superman didn’t drop everything to rescue him, oh well, all done! Luthor has no moment of clarity; he doesn’t call Superman on hypocrisy or phony self-righteousness.  He makes no promises or threats.  He says nothing that gives us or Superman any insights into his sudden change of heart or how he feels about spending over a year as a hero.  He’s mad Superman didn’t save him so poo on you, Superman!  I’m done with you!  Whoop-ti-doo.

Gleason and Tomasi spent 4 issues hinting at a big climax and all we got was Luthor throwing a temper tantrum.  Widdle Wex got his widdle feewings hurt?  That’s it?  That’s all?  This is Superman’s #1 nemesis of all time.  Where was the drama?  Where was the foreshadowing of the great twist where Luthor gives up being a superhero and returns to the dark side?

Calling that scene anticlimactic is not the least bit unfair.  If this is a payoff, it clinks with a dull thud like spare change in your pocket.  It seems the whole point of this entire story was just to get Luthor back to being evil.  And how do we know he’s back to being a villain? Because he has a creepy smile. That’s it; nothing more.

Then there is the matter of Superman “taking over Apokolips” as shown on the cover. That was a big, fat red herring.  While it’s possible democracy could take hold and last on the planet that birthed Darkseid, color me a deep shade of skeptical.  The best case scenario is it actually does happen (don’t hold your breath) and then Darkseid returns to smash that newfound democracy to bits.  A blind man could see none of this is going to last.

Or even more predictably, the people of Apokolips call on Superman to save them and he’s too busy and they turn on him in the same way they did to Luthor.  Again, we’ve already seen this happen and a repeat won’t be more rewarding the second time around.

Lois joins Granny Goodness and the Female Furies…and it means nothing. Superboy takes over the Hunger Dogs and nothing important comes out of that either.  The bulk of these 4 issues has been like a bad one-night stand: lots of teasing, a ton of exciting foreplay and then the climax is unsatisfying and over all too quickly.

The artwork by Doug Mahnke, Jaime Mendoza, and Wil Quintana is excellent.

Final Thought:  The “Imperius Lex” storyline served its purpose.  It got Lex Luthor back to being a villain (or so we should assume just because he looks evil and nothing more).  Superman is the official leader of Apokolips until that inevitably goes south.  But no, he doesn’t go full-on Darkseid like the covers mislead you into thinking.

It’s not a bad issue, but it’s certainly not a great one.  It got us from Point A to Point B and sets up future storylines.  Nothing exciting to see here, folks, and certainly no events or characterization you haven’t seen done in comics a thousand times before. Very predictable—but with some beautiful art, though. Oh, and a motivational lecture by Superman. That’s all, folks.