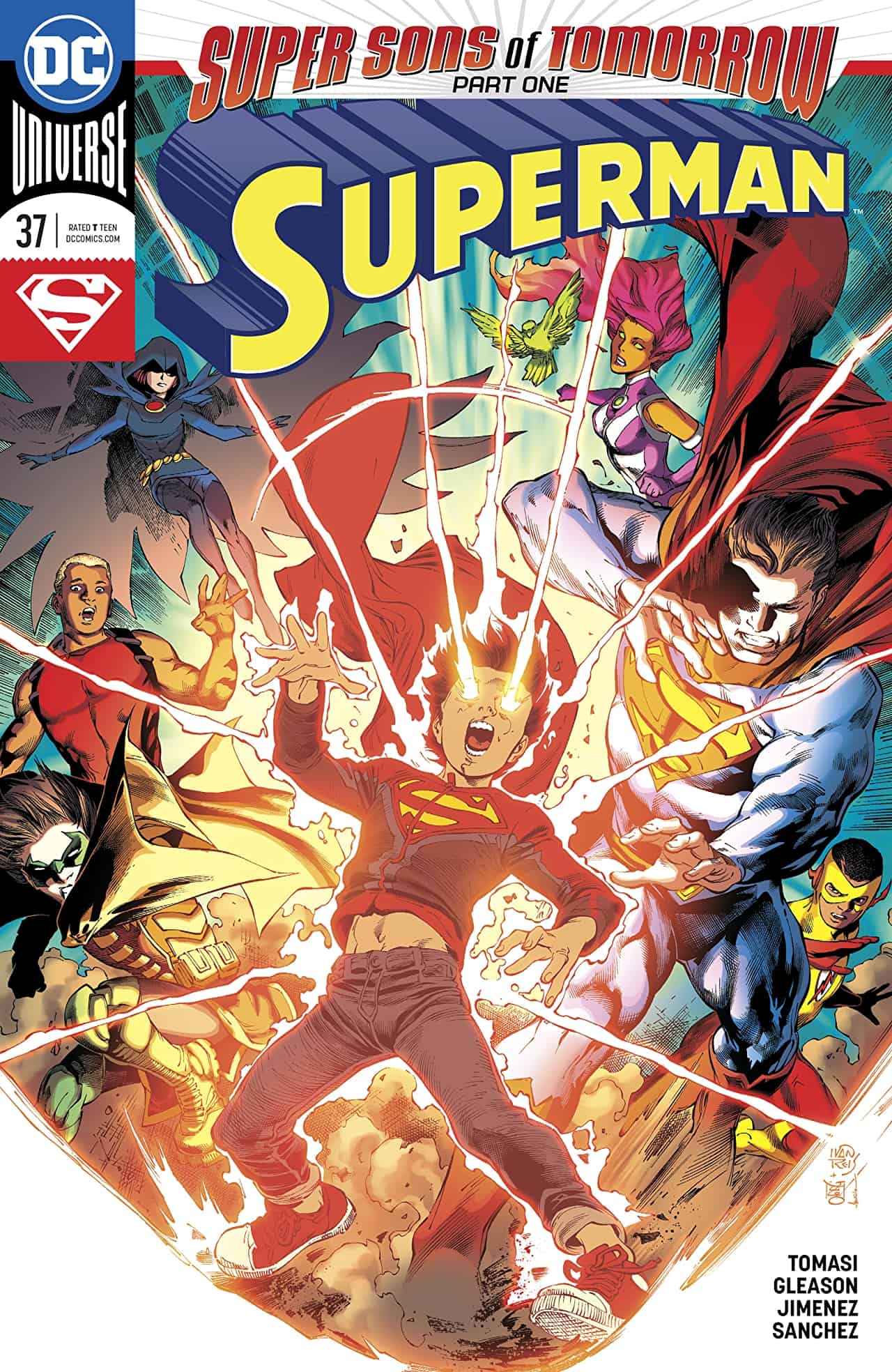 The crossover between Superman, Super Sons and Teen Titans begins! The Batman of Tomorrow, Tim Drake, travels to our time to prevent Superboy from causing millions to die. Tim is determined to kill the Boy of Steel…but Superman will do anything to protect his son no matter what!

Superman is repairing the Fortress of Solitude after his battle with Mr. Oz.  Batman is at home as Bruce Wayne sitting and reading in his study. Unbeknownst to either of them, the Batman of Tomorrow—Tim Drake—has returned to kill someone else.

As Bruce sits in his study reading, we get an interior monologue from the Batman of Tomorrow, Tim Drake, who comes from an apocalyptic alternate timeline.  He is reflecting on how Bruce taught him to use darkness as an ally when trying to make a difference in the world; it’s the only way he can make sense of what’s happening.  Then he smashes through the window:  “Hello, Bruce!”

As he beats Bruce, Tim asks him if he didn’t expect him back so soon or did he think Hypertime swallowed him up?  Bruce asks rhetorically if he’s back to save another timeline; if he’s here to kill someone else:  “I’m sure you realize I can’t let that happen.”  They argue back-and-forth.  He asks Tim if he’s here to kill him and Tim says no, though that would be easier.  Bruce orders him to go back to his world and Tim refuses… 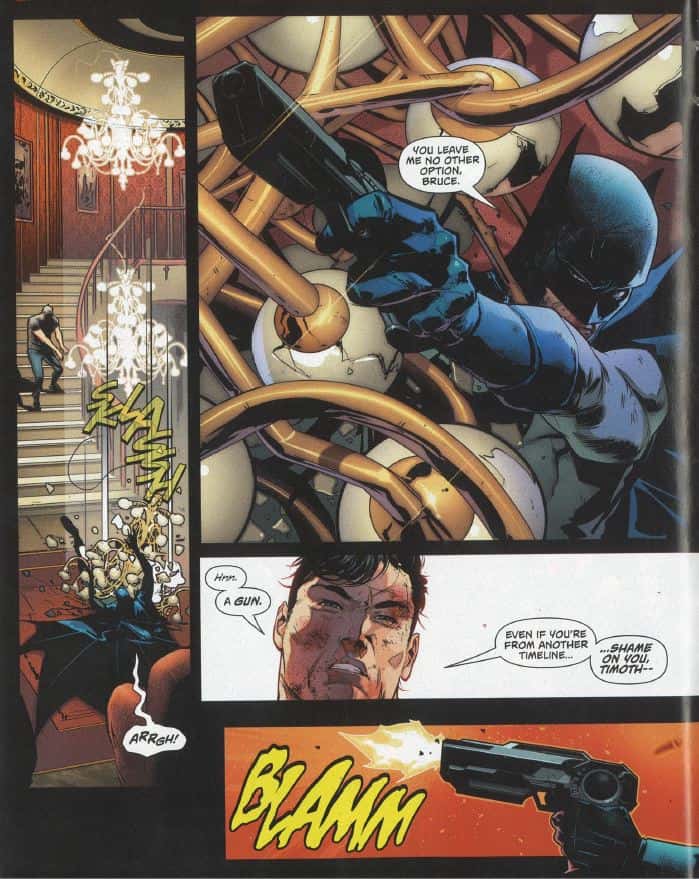 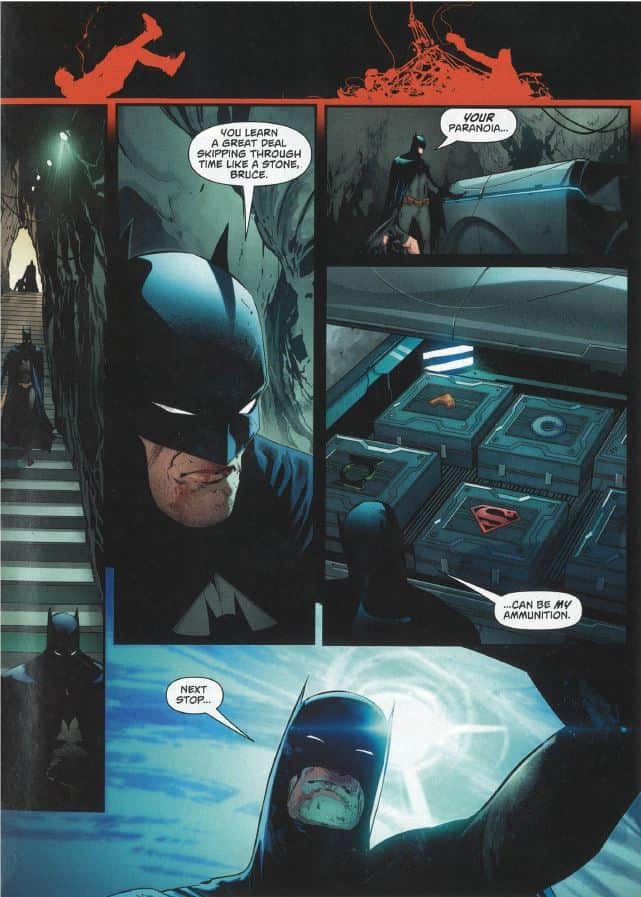 Tim says he’s going to The Arctic.  It’s awfully convenient monologue-ing he says out loud in a place filled with cameras and microphones that his destination is where the Fortress of Solitude is located right after he steals weapons capable of defeating Superman. (Why not use interior monologue again or a thought balloon instead?)

Superman tells his robot major domo, Kelex, how upset he is about all the damage Mr. Oz did to the Fortress of Solitude, especially his breaking the statues of Ma and Pa Kent.  As they reassemble them, Kelex says sensors detect a lifeform outside of the Fortress. Superman says maybe it’s a polar bear.  Kelex replies he’ll go see what it is.  This is idiotic:

Kelex finds the Tim Drake Batman and tells Superman a homo sapien intruder is detected.  This is blatantly stupid as Batman has been to the Fortress of Solitude numerous times and met Kelex before.

Superman swoops in to capture the intruder… 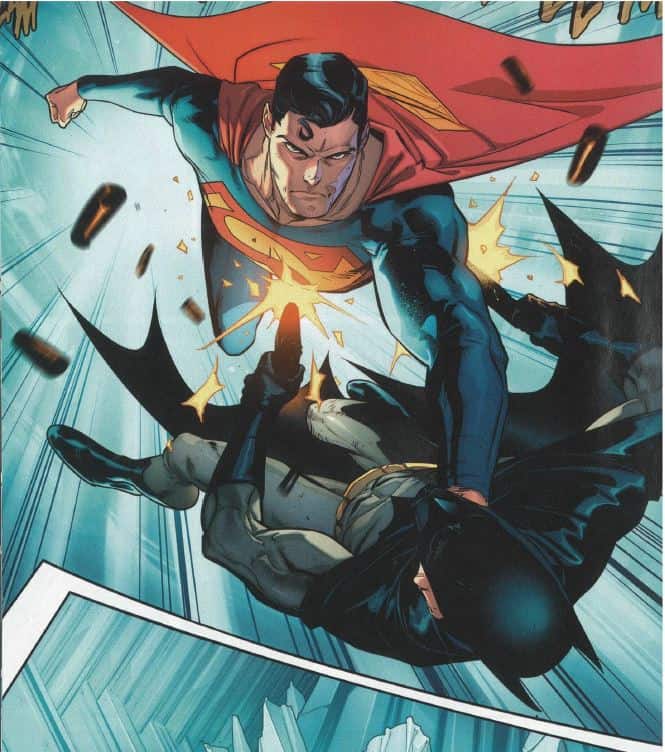 Now Tomasi & Gleason decide that Superman can use his super-senses to detect it’s Tim Drake from some other timeline.  (Why he couldn’t use his super-senses 3 pages ago is never explained.)  Tim replies he could tell him when and where, but then he’d have to kill him—one of the most overused lines in pop culture of all time.

We are given 4 more pages of obvious padding-for-trade as Tim and Clark fight trading quips and expository dialogue.  Tim lures Superman into a trap that he should’ve seen coming with his super-senses (which he again doesn’t use for no good reason):  a red kryptonite-lined glass bubble.  As red K can cause unpredictable changes both good and bad to Kryptonians, the choice of red K is another dumb decision in this very disappointing script.  Red K could’ve made Superman go wild with his powers increasing or acting out of control instead of weakening him.  Why the bubble which is colored bright red didn’t use red solar energy to subdue him instead is baffling and absurd.

Then Tim monologues out loud again like Syndrome in The Incredibles and announces his evil plan to kill Superman’s son.

20 pages of exposition and clichés, that’s what happened.

In speaking with others both online and in local comics shops, there’s been a recurring criticism of this book.  Tomasi & Gleason have gotten further away from focusing on Lois & Clark raising Jonathan and acting as a family unit.  They’ve spent more and more time pursuing stereotypical superhero story tropes with recycled villains engaging in prosaic actions anyone could see coming from a mile away.

The fact this evil Tim Drake from the future – a tired cliché written better in James Tynion’s exciting A Lonely Place of Living in Detective Comics — keeps telegraphing his evil plans to both Batman and Superman only reinforces that conclusion.

This entire plot could’ve been told in 10 pages and then Tomasi & Gleason could get to the more compelling parts of their story.  But DC has a trade paperback to sell along with trying to get people to buy the other books in this series.  FYI, I haven’t ever bought an issue of Super Sons and this crossover isn’t going to persuade me to pick it up now either.

This issue is a nothingburger filled with pedantic exposition and repetitive fight scenes that go on for pages too long.  When fans complain about padding for trade, a comic book like this is the perfect example.  The big selling point of this issue is the gorgeous artwork by Jorge Jimenez.  That’s it.

Characters behave in stupid ways that make no sense.  Superman only uses his super-hearing and x-ray vision after he captures the Tim Drake Batman and then he forgets to use those powers again when Tim lures him into a trap.  Why? Because the plot requires that Superman not do so when the writers want to indulge in pointless fight scenes and explosions to pad their script.

Every character talks in clichés.  The first part of Tim’s plan is smart but so simple it wouldn’t take 20 pages to execute.  But it has to because editorially the edict is this story must take 4 issues to tell which requires ignoring obvious logic about the characters involved.  This includes Tim continually announcing out loud what he’s doing to both protagonists instead of keeping his mouth shut – which only should’ve made it easier to stop him.

Alfred could have found the wounded Bruce Wayne, Bruce told him to warn Clark and voila, Superman would’ve known Tim was coming to the Fortress to attack him.  All of that could’ve been told on a single page.

Also, if Tim is using Batman’s trap for Superman, why in the hell would Batman use red kryptonite?  For decades, it is well-established that red K is the single most unpredictable form of kryptonite in existence with a 50/50 chance of making Superman’s powers stronger, not weaker—or even worse, turning Superman into a monster who would be a menace to everyone around him.  That is slapdash writing and rushed editing because anyone who writes a comic book could look that fact up on Google in less than 5 minutes.

Thank God for the stunning art by Jimenez and his colorist, Alejandro Sanchez.

Superman #37 continues the steady decline in Tomasi & Gleason’s writing on Superman. The heartfelt characterization between Lois, Clark, and Jonathan has become sparser over the past 3 months while boring punch-outs, cliché-riddled dialogue and cardboard cut-out villainy have taken the spotlight.  The one thing this book has going for it is sharp art coupled with outstanding coloring.  Other than that, Superman has become undeniably padded for trade, awash in mindless fight scenes and losing focus on the potent characterization that once made it such a crowd-pleasing romp among all the DC Rebirth books.