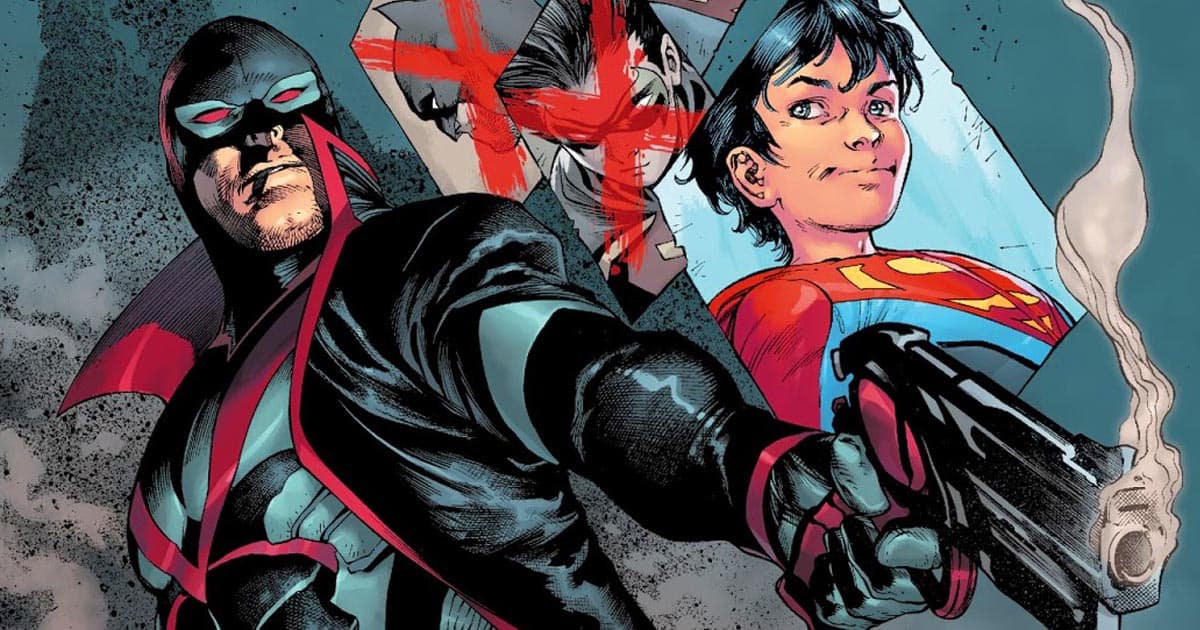 The crossover between Superman, Super Sons and Teen Titans continues! Tim Drake of Tomorrow is Batman no more; call him Savior!  He’s here to save the world before Superboy destroys it…and 2 Teen Titans agree to help him! But the rest of the team is racing to find the Boy of Steel before Tim and his rogue Titans do.  In the end, one of them will sacrifice his life to stop Superboy once and for all! 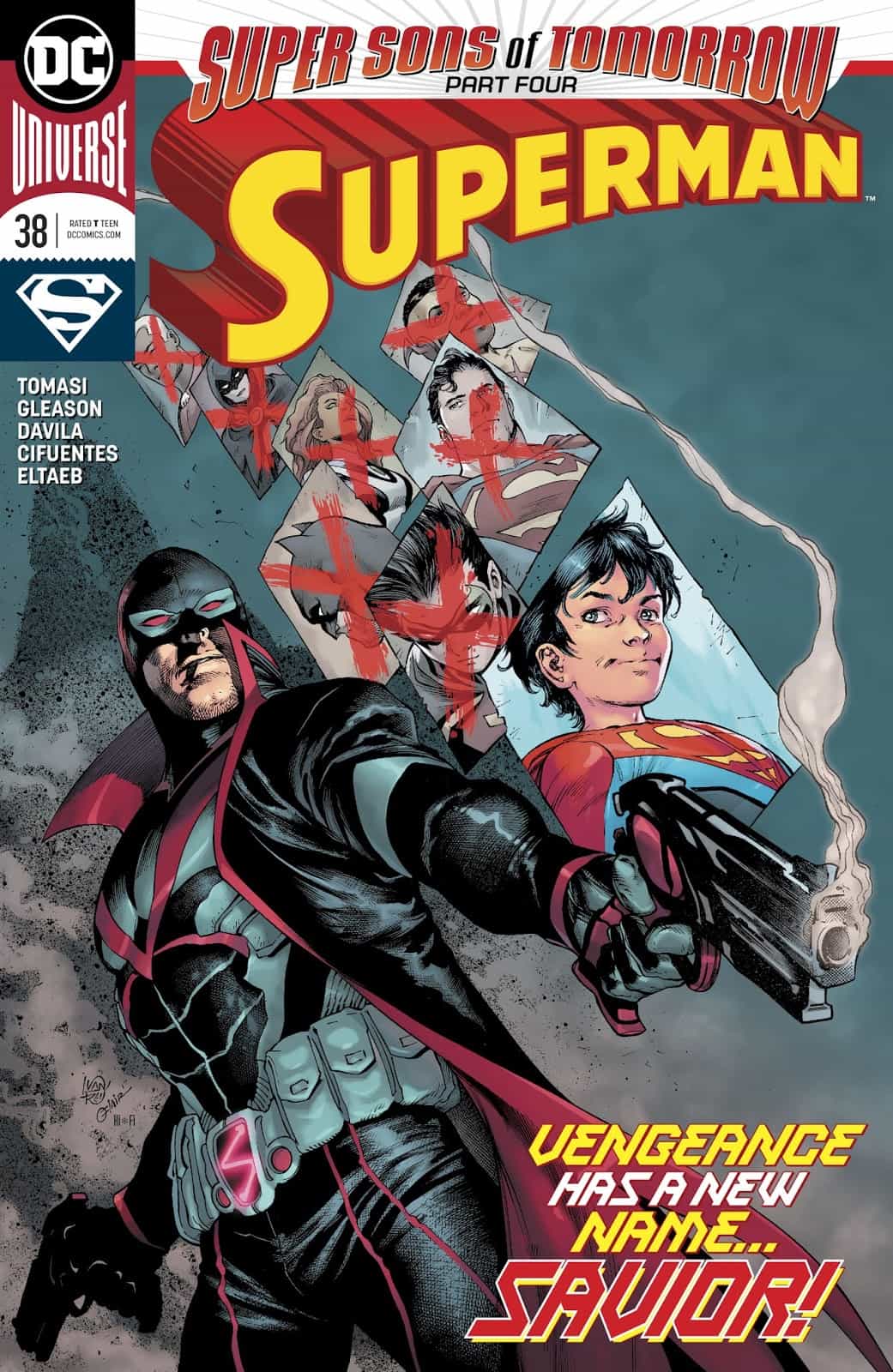 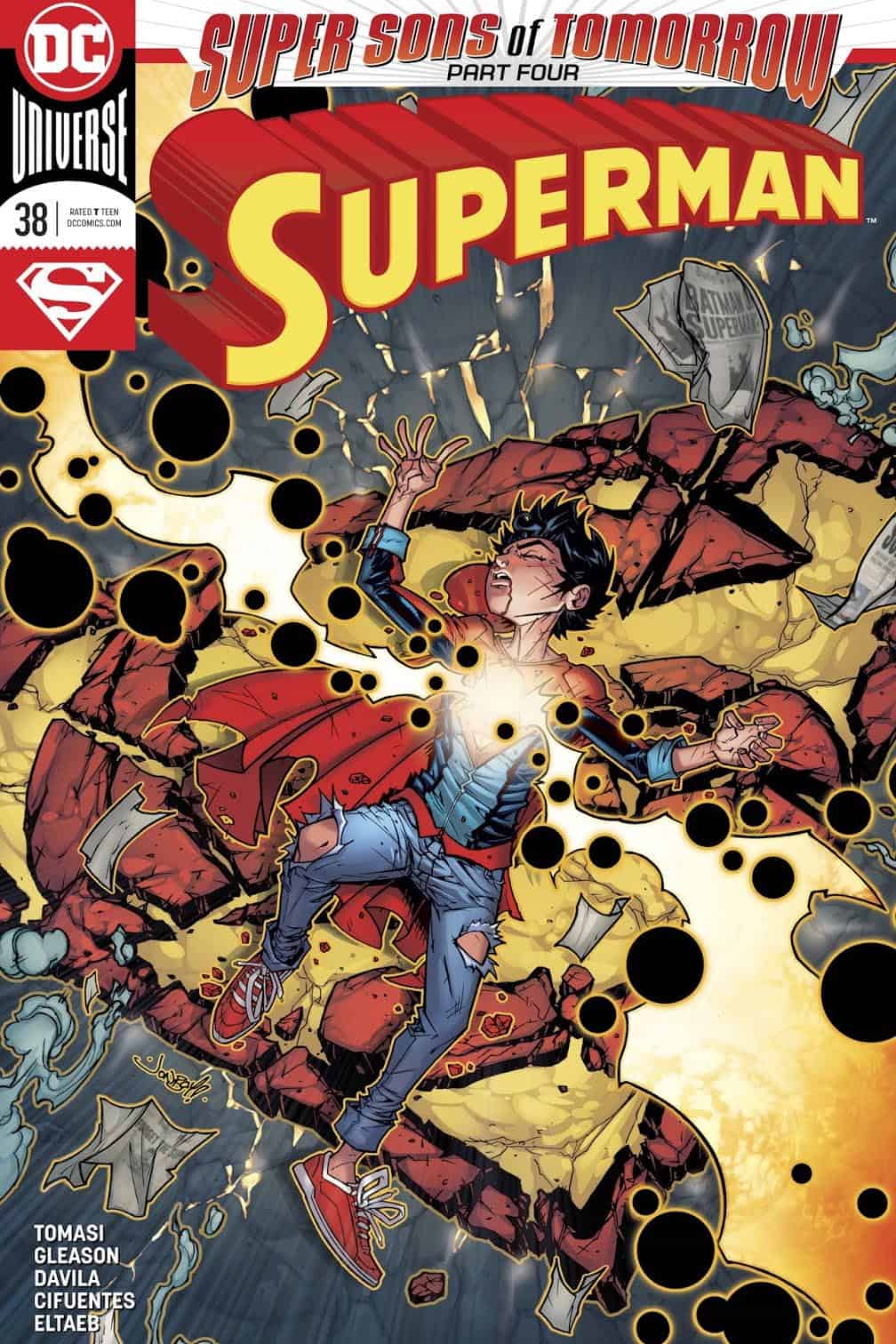 Robin escaped with Superboy to hide him from Savior AKA the twisted Tim Drake of Tomorrow who’s willing to kill Superboy in order to prevent his accidentally blowing up Metropolis in the future.  Savior persuaded Raven and Beast Boy to help him track them down.  But Starfire, Aqualad and Kid Flash refuse and use Aqualad’s control of the ocean to follow the underwater trail that the Super Sons left behind.

The first page is 5 panels of exposition as Aqualad tracks the Super Sons’ trail underwater radioing Starfire and Kid Flash who are flying in a jet above the ocean.  It is a bore.

Aqualad finds the undersea base where Robin and Superboy are.  We know this because Robin has docked his sub there.  Inside Robin and Superboy are discussing what to do about Superboy’s solar flare powers.  We are told yet again that Savior did not tell them how Superboy destroys Metropolis.  This isn’t because the Teen Titans aren’t smart enough to ask, but because Tomasi & Gleason are using the “Hide The Plot” gimmick to draw out the suspense for no good reason.

Instead of docking, Starfire rams her jet into the undersea base and Aqualad seals them in an air bubble so nobody drowns.  Of course, Starfire could’ve just docked and then blasted open the doors which would be easier.  But crashing a perfectly good jet into the base is much more dramatic so the script has to let logic wash away with the tide.

Robin’s sensors tell him the Teen Titans are here, but not which ones.  Clearly, this undersea base has A) no cameras and B) a computer that is so dumb it cannot distinguish one Teen Titan from another.  Why?  So Tomasi & Gleason can have Robin assume it’s Raven and Savior come to kill Superboy.  Superboy suggests they try to talk to them, but we can’t have anyone behaving reasonably because they need to pad the story with 3 whole pages of Robin and the Teen Titans punching each other.  It’s nothing but dumb action with cliché-riddled dialogue.

We do get a very pretty 2-page spread of Cassie Sandsmark, Conner Kent and Bart Allen traveling through time.  It’s padding, too, because 1 page would have sufficed, but at least it’s pretty padding… 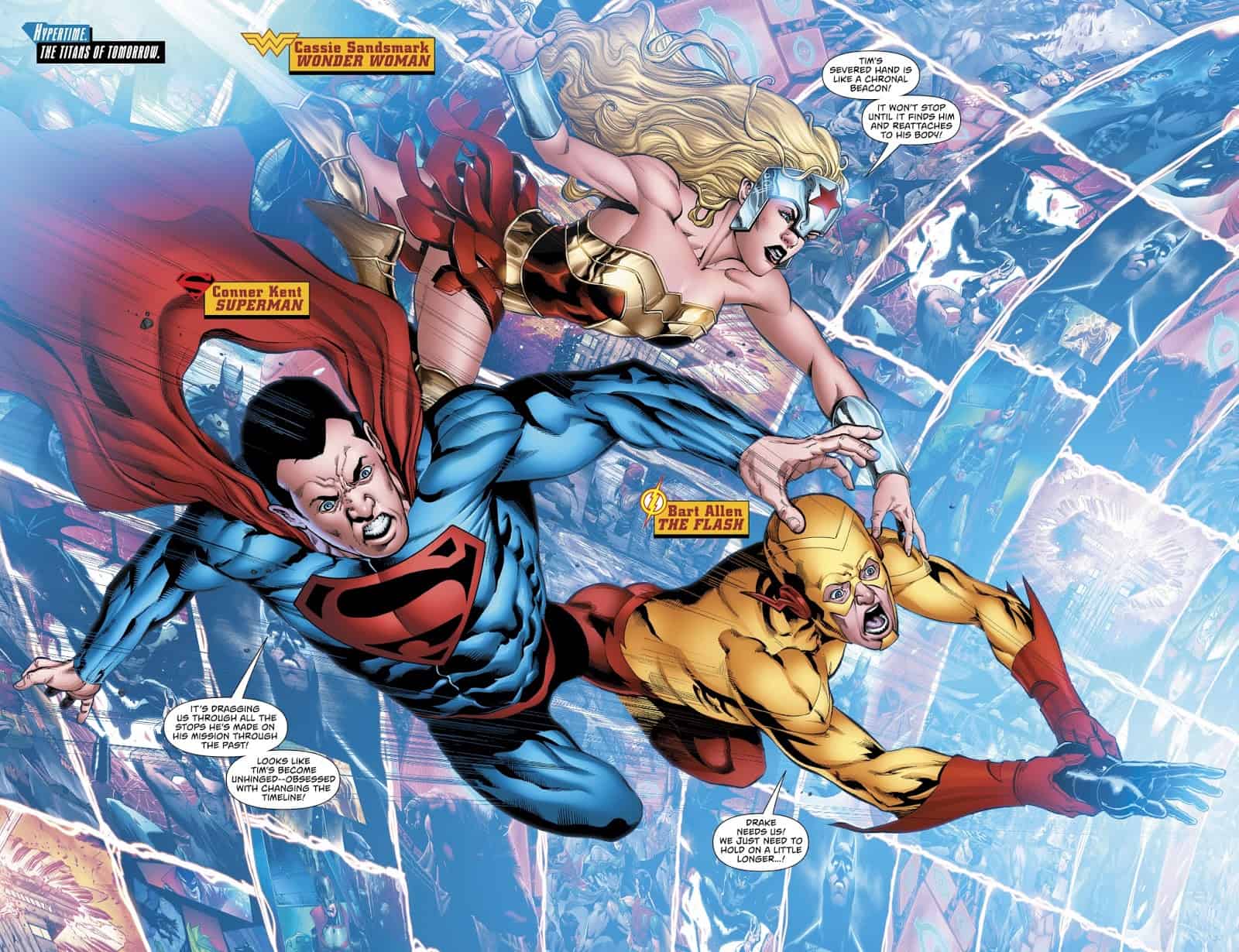 The stupidity of having 3 superheroes hurtling through time holding onto a severed hand has now been extended into a 2nd issue and it only dumbs down this story even more.

Surprisingly, the next page of Superboy punching Robin to shut him up and Superboy having Kid Flash punch him so Raven can’t track them because they’re unconscious was witty and fun to read.

Superboy finds his father Superman in the red kryptonite bubble where Superman explains that red K weakens them and affects their emotions.  Um, okay.  That’s not how red K has worked in the past, but fine, DC is changing that.  But exactly how does it affect Kryptonians’ emotions?  And why would that be dangerous and in what way?  No one says.  Again, why bother changing and explaining things when the writers just ignore any part of the story that doesn’t make sense and offers no explanations?

Superman tells Aqualad to push the prison he’s in under the ice so it can’t affect Superboy.  I have a better idea.  In fact, I have several:

I’ll tell you why they can’t do anything so simple and easy that makes perfect sense.  Because the writers just want to have Superboy go loco and explode… 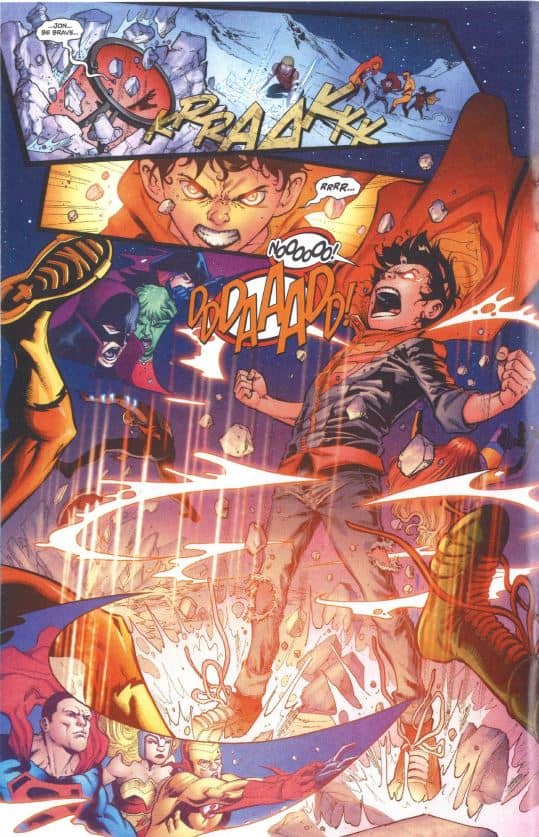 All of that could have been avoided.  But why let characters using common sense interfere with lazy writing where people go crazy and explode for cheap sensationalism that requires everyone to behave like morons?

Is Superboy too dumb to remember what his dad told him 1 minute ago?  That red k only weakens him and that Superman isn’t dying?  So, if Superman can’t be killed by red k and is only weakened, why is Superboy reacting as if he’s dying or dead?

Now Superman bursts out of his red k prison with no trouble at all.  Um, how’d he do that? Oh, only because his son exploded with rage.  The problem with this implied explanation is that in the first chapter of this story, Savior told Superman he was going to kill his son.  Are we to believe that the antagonist telling Superman he’s going to murder his only child didn’t cause the Man of Steel to become so angry or scared for his son’s safety that he couldn’t burst out of his prison before?

The writers are neglecting internal logic in their plot.  They seem to be making things up and throwing them against the wall as they go along.  Nothing makes sense in this story.  It all changes on a dime for no good reason at all other than the writers just wanted to blow crap up or have characters behave in a melodramatic way that is pure nonsense.

Speaking of nonsense, now Raven’s powers work perfectly (though she should’ve been able to find them immediately when the boys regained consciousness 4 pages ago) 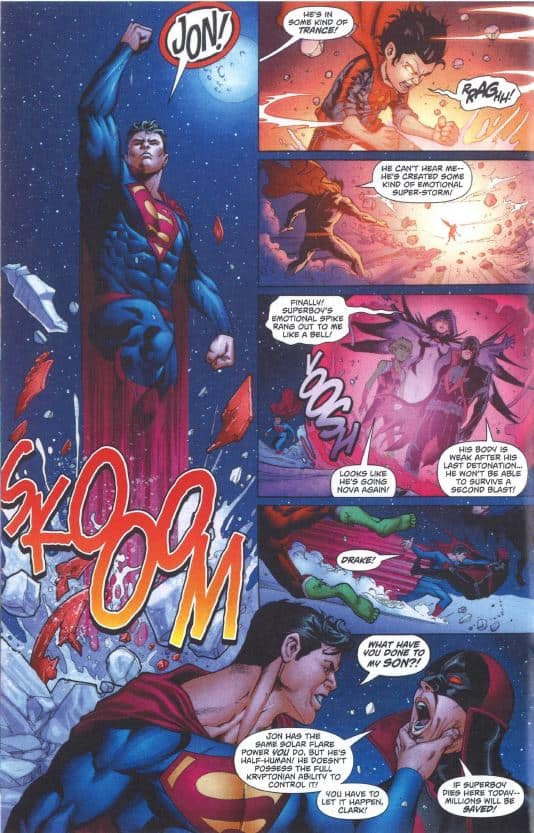 What the hell is “an emotional super-storm?”  Is this a new Kryptonian power?  Is Superboy now an empath like Raven that can use and manipulate emotions?  Oh, of course not!  That’s just something Tomasi & Gleason made up solely for this crossover.  It makes no sense and it never will.  And it will be completely forgotten after this issue.

Cassie, Conner, and Bart appear.  We get a panel devoted to Savior’s disembodied hand rejoining his body.  Yes, it’s that important!  This is both explained to us in the dialogue and shown to us in the art—because otherwise, we’d be too dumb to figure it out, right?

It is hard to explain the next 3 pages because they simply do not make any damn sense.  Superboy’s solar flare becomes its own separate entity.  Why?  For no reason at all.  Now the timestream tries to self-correct by pulling Savior back to his correct time.  Why?  Because it’s convenient.

Then there’s this bon mot from Savior:  “Flashes! Generate a circulating funnel with its exit point on my zero!”

What in the hell is a circulating funnel with an exit point on his zero?  Have Tomasi & Gleason gotten so lazy that explaining events in their story in plain English with as few words as possible is something they just can’t be bothered to do?

Savior absorbs the separate entity that is Superboy’s solar flare (God, I’m losing brain cells just typing this drivel) despite his having no superpowers at all and then disappears into Hypertime.

I’m having a hard time finding a way to write this review without being snarky because this is one of the worst comic book scripts I’ve ever read.  It is atrocious.

When people who don’t read comics make fun of how stupid comic books are this is exactly what they’re talking about.

This is writing that is lazy to the point of embarrassment.  Characters behave in ways that completely contradict past characterization.  They talk like mindless hotheads with no impulse control or basic reasoning skills, let alone simple battle strategy which every superhero knows.  Superpowers that have never existed before are made up out of thin air and then forgotten in the very next issue.

Kryptonian solar flare superpowers do not become a separate entity.  If they did become an entity, an entity has consciousness or sentience.  But we see no evidence of this.  I have a feeling the word “entity” was chosen solely because it sounded cool, not because it made sense.  Very little of this story makes any sense at all.

How does red kryptonite work now?  I doubt either the writers or the editors know, let alone care.  What is an emotional super-storm?  They don’t seem to know or care about that either.

The artwork by relative newcomer Sergio Davila is terrific.  The coloring is excellent.

Other than that, this is one of the most illogical and insipid crossovers I’ve ever read in 45 years of reading comics.  The script is a hot mess.  Even a child could likely see through all the mindless contrivances it revels in.

Through the “Imperius Lex” arc and now “Super Sons of Tomorrow,” Tomasi & Gleason’s run on Superman keeps declining in quality.  The heartfelt characterization between Lois, Clark, and Jonathan is rarely seen anymore.  It’s been replaced by dumb slugfests and lots of explosions.  The writers make up stuff with no explanation and internal story logic is ignored.  Thank God this crossover is over in one more issue because it can’t end soon enough.