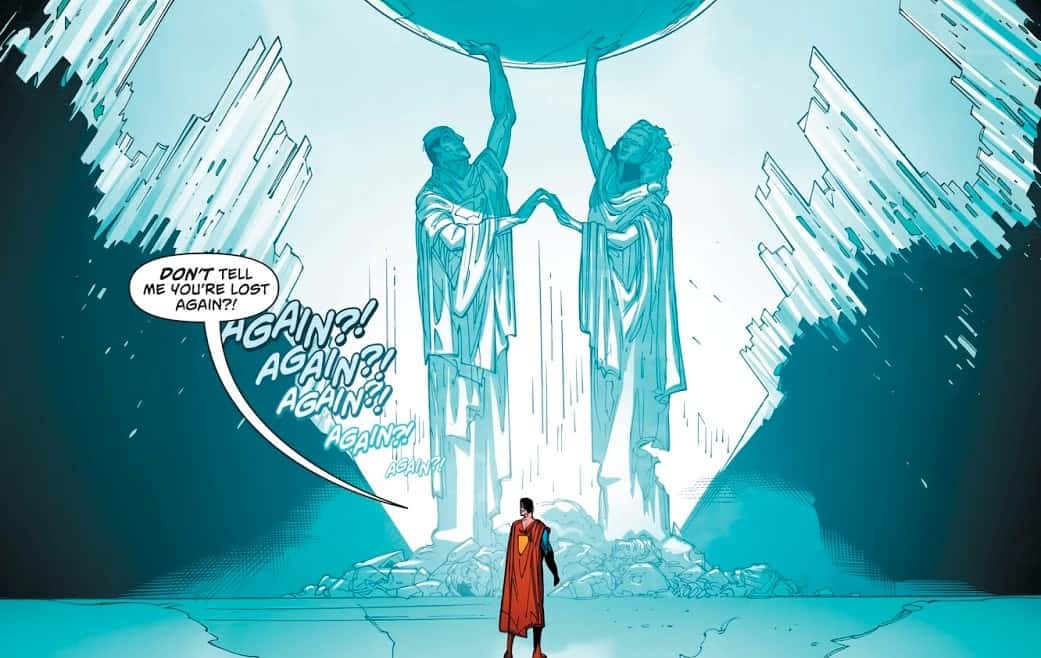 It’s the anniversary of the day Krypton exploded! In the name of Rao the Man of Steel and Superboy won’t allow another planet to suffer the same fate! Don’t tell Lois, these boys are skipping the solar system for a bit! 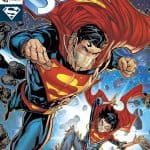 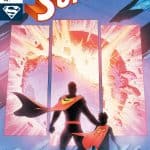 As I’m sure at least 60% of the planet knows, Superman is the last survivor (kinda) of the planet Krypton, thanks to the properties of Earth’s yellow sun he possesses a great many powers, including flight, super strength, invulnerability and more or less anything else the story calls for. (unless it calls for him to be powerless) Despite his godlike perfection is many, many areas, he is the idea that all humanity strives toward, despite many who would see the playing field leveled.

Now, with his faithful wife Lois and their half Kryptonian son Jon, the Man of Tomorrow is fighting for Truth, Justice and the American Way for a new age of heroes! 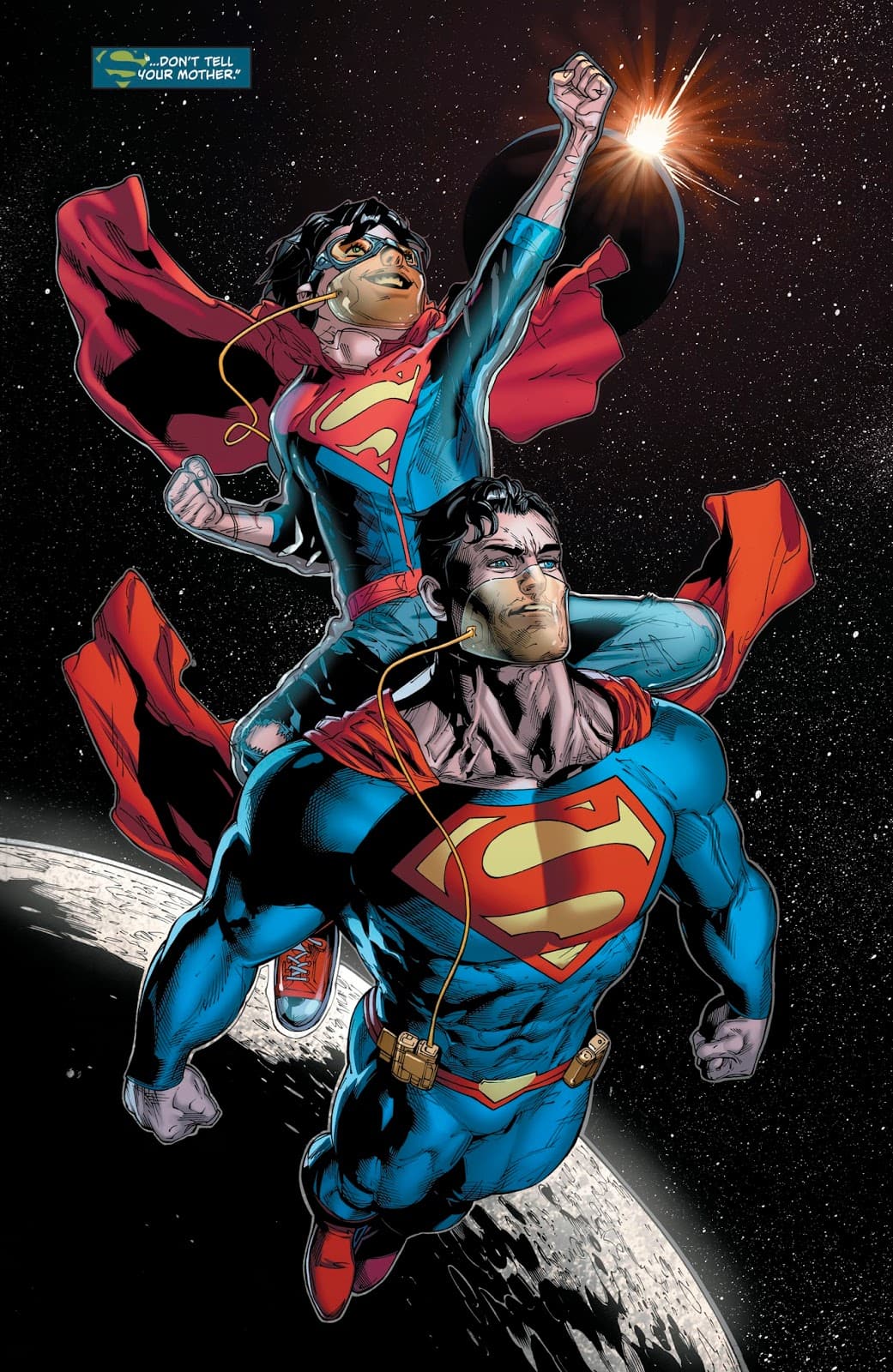 We open on Superman and Superboy walking through the Fortress of Solitude in a sort of history lesson, it’s the anniversary of their home planet Krypton exploding, almost eradicating their species entirely! After some really nice dialogue between the father and son, an alarm blares, the planet Galymayne is about to suffer just as grim a fate as Krypton, this looks like a job for Superman! (and Superboy! (Don’t tell Lois!)) 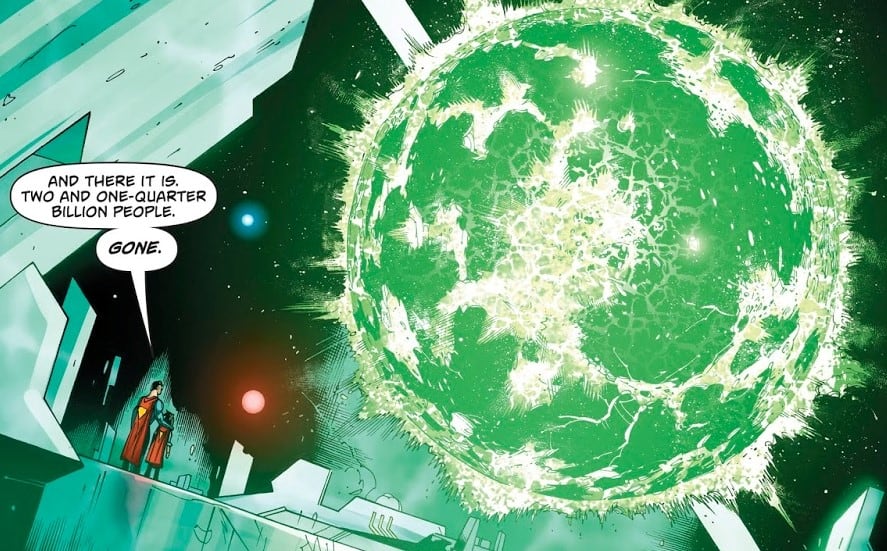 As the pair flies through space in Kryptonian exo-suits, Clark tells his son that the suit will insulate them from any harmful atmosphere, and protect the relatively (to Superman) less protected Jon from an extra possibility of harm. They approach the planet with some stirring visuals, Jon has some interesting questions about how unfamiliar natives react to a godlike being telling them their planet is doomed? He tells him there isn’t any set way to react to such news, they’re just there to help if they can. 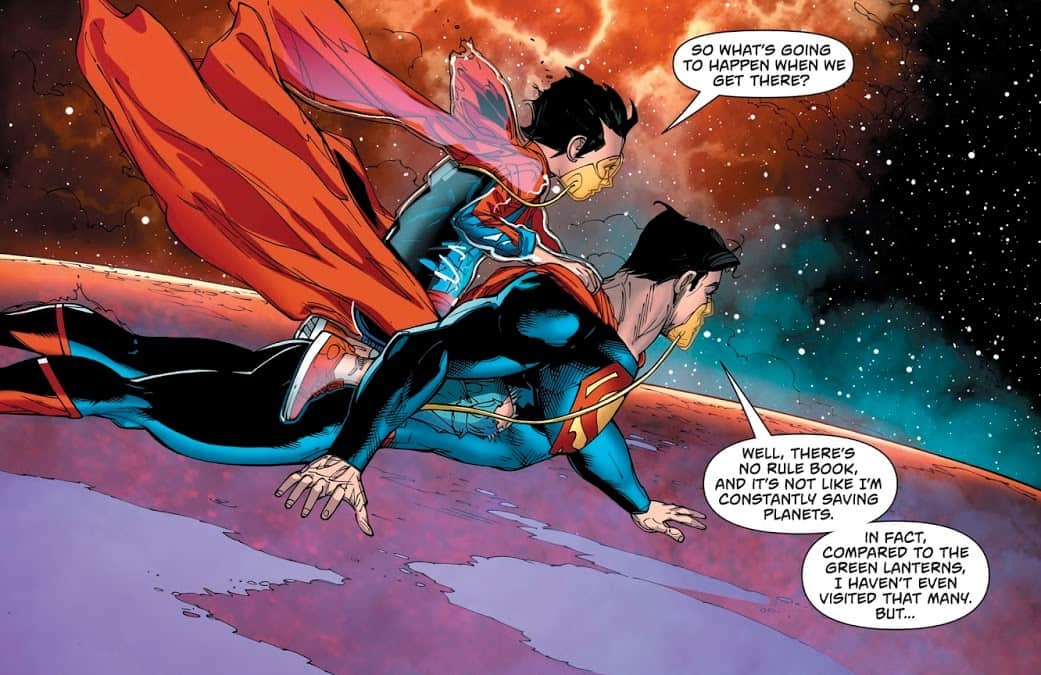 As they are escorted to the leaders of the planet, a buglike underwater race, kind of like the sea monkeys from the old comic ads. The leaders seem to be a religious, rather than political, sect and don’t seem accepting of Superman’s reverence for life. Their stance; if they were born on this planet and it gave them life, they ought to die on it! For Superman to suggest otherwise is heretical, and as punishment, he and his son are sentenced to die with them!

How does Superman respond to a being in need who refuses to be saved? Pick up this issue for yourself and find out! Pick up a copy of Superman #40 today!

On the one hand, this book had some rock solid visuals and some great moments between Superman and his son, on the other hand, it’s a bit heavy-handedly making fun of religious xenophobia. Although I support open thought I’m more or less never a fan of hamfisted allegories attacking real-world issues. I feel like comics should be a way to get away from the numerous troubles of the real world, not a reminder of them. I do understand some people feel differently, and that’s fine.

This arc is off to a kind of weak start despite having some great things going for it, I kind of feel like this arc might just be the title treading water waiting for Brian Michael Bendis to come on in a couple months.

I’ve been generally loving this title, but this issue felt a bit weak if this trend continues for this arc I might skip it, which I haven’t done with this book in a while. Give it a read if you’re into slightly overt religious or political statements in comics, I personally am not.